Swedish heavy metal band Sabaton are ripping across North America now in support of their latest opus, 2016’s The Last Stand. The band’s gripping power metal sound and epic battle-themed lyrics make for one of the most powerful musical experiences in modern metal. SF Sonic was fortunate enough to talk with bassist and co-founder Par Sundstrom about how things have been going so far on this tour.

SF Sonic: How has the fan reception been to your latest album The Last Stand?

Par Sundstrom: Fantastic, I think it is a great sign that we can play as many as six songs live from the new album due to demand from the fans. Some bands rely on their back catalogue since fans prefer that instead of newer songs. I’m glad we still evolve in the right direction and write songs fans want to hear.

SF Sonic: What inspires you to write about historical battles? Do you ever think about changing up the subject material in your songs? 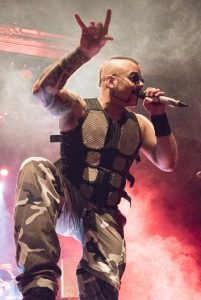 lives, we prefer to leave them private. We are also not so interested in writing about fiction or fantasy since we feel that the real world and its history are far more exciting and scary than anything that we can make up. The theme about historical battles fits very well into heavy metal too.

SF Sonic: How has it been working with (new guitarist) Tommy Johansson?

Sundstrom: Tommy fits perfectly with Sabaton. He was a fan of Sabaton a long time ago and he even performed covers of Sabaton for many years. We first met at a Sabaton show almost ten years ago and then at different parties and such. In 2012, when Sabaton went through the big lineup change, Tommy was our first choice but he was too busy with his own stuff to join. But when Thobbe notified us that he wanted to step out, the first choice again was Tommy. And this time Tommy said yes without hesitation.

I’m looking forward to the next studio session to see what he can add to this.

Sundstrom: There are many things I like. First, here we play way smaller venues than we play in Europe, which I like. The arenas are amazing for sure, but to get closer to the crowds in clubs is really something. The atmosphere of 1000 people inside a sweaty sold out club is just the best setting for a great metal show. I also like the lack of hospitality, as weird as that may sound. Artists are generally treated better in Europe by promoters and venues. Most people hate this about America but I’m kind of the opposite. I’m fueled by something that is not simple, I love challenges. Maybe what I like the least is how often, certain promoters do everything they can to cheat artists.

SF Sonic: Many European metal bands are hesitant to tour America because of the costs associated with coming over here, how do you feel about that sentiment?

Sundstrom: I was never afraid of costs. I know they are constantly there. Our first support tour in Europe was so damn expensive that we kind of started to learn there. And with all the support slots we have done all over the world, we are used to things costing a lot. It is simple to say that even if Sabaton is a big band today, if I wanted to make money, I should have done something else.

I think artists complain too much about things that most people would see as luxury.