One of the hottest bands in the metal underground today, Tengger Calvary are storming across the country in support of their latest release, Die on My Ride. The group specializes in mixing classical Mongolian music with heavy metal, making for one of the most unique sonic experiences in music. Using traditional Mongolian stringed instruments such as the morin hhuur, the igil, and the shanz, Tengger Cavalry sounds like no other band out there in the modern music scene. Die on my Ride features an expansion of the band’s sound into more pop and electronic territory, with many songs making use of clean vocals, synthesizers, and drum loops.

This approach melds seamlessly into their classic sound, one that is built upon the rampaging guitar work of front-man Nature, who also provides the band’s distinctive vocal sound based around classical Mongolian throat singing. Nature also contributes with his stellar playing on the morin mhuur, igil, and shanz. Musically speaking, each song stands out on its own, and it is really the interplay between the stringed instruments that pop out upon listening. The biggest departure for the group is on the melancholy ballad “Ashley,” a track based around a series of drum loops and subdued acoustic guitar strumming along with a set of clean vocals from Nature. SF Sonic talked with Nature in between shows on their tour and the interview is posted below

SF Sonic: What inspired you to start the band in the first place? how did you come up with the concept to combine traditional Mongolian folk music with heavy metal?

Nature: I was traditionally trained in Mongolian music for years, I am classically trained in playing the Morin Khuur and the Sanxian and I grew up listening to heavy metal, I started listening to bands like Slipknot when I was in middle school, so I was thinking it would be really cool to combine the two things I love and incorporate them together musically. At the beginning, it was a total experiment to see what would work… and if it could actually work… but I got a lot of positive feedback and kept going with it.

SF Sonic: How’d you go about finding the rest of the band?

Nature: It’s funny because I’m into both traditional Mongolian music and heavy metal in NYC so I was able to meet a bunch of really cool musicians in both scenes and that is how we began. I play with a bunch of traditional Mongolian musicians for services and I started reaching out and finding other people that way. At the same time, I was hanging out and jamming with metal musicians as well so after a while I was able to find the right people.

SF Sonic: On your new album Die on my Ride you’ve experimented with some more electronic instrumentation, what made you want to do that?

Nature: I mean, I had been writing traditional Mongolian music mixed with metal for a long time and I got a little tired of repeating the same thing over and over. So, I wanted to incorporate some new ideas into the album, just to add some new flavor. I want our fans to appreciate the new album on its own and not just have another Tengger Calvary album like all the ones before it. I listen to a lot of pop and electronic music so I wanted to start to incorporate more of that into our sound.

SF Sonic: I know it has only been a few days but how has the new album been received?

Nature: Surprisingly I thought we would receive a lot of rejection and negative comments but our new fans actually dig the new ideas that we have brought in. Our new pop song Ashley got a few negative reactions but that was to be expected since it’s a big departure from what we’ve done in the past. But yeah our hardcore fans are actually really digging the new sounds and the new songs which is really awesome.

SF Sonic: You’ve become quite popular here in the states, when did you first realize there was a big following for your band here? 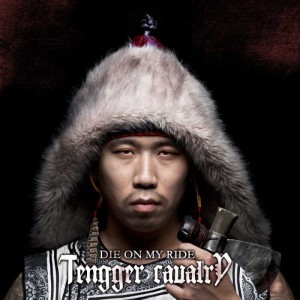 Nature: It was almost 2 years ago when we played our first show in NYC, and like 60 people showed up for us. It was really surprising. The promoter was really surprised that a brand-new band was able to draw so many people at their first ever show. From there I saw that people were starting to following us but the number of people we play for isn’t that important. It doesn’t matter how many people follow you and show up to your show, you have to put on a great performance regardless, you can’t rely on a specific number of people to show up, you have to always give your best.

SF Sonic: What has been your favorite part about touring (and living) in America?

Nature: It’s cool to meet new people and keep that good energy all time and learn about different places.

SF Sonic: What has been your favorite place to play in America?

SF Sonic: What’s your dream band to play with?

Nature: I would love to open Eluveitie and Turistas would also be awesome to open for. I’ve always been a huge fan of those bands and it would be so awesome to play with them.

Find out more about Tengger Cavalry on their website.