When Sly Stone said “there’s a riot going on,” he must seeing have been Moon Hooch in the future. Truly unique, Moon Hooch fuses something resembling “jazz” with music that can definitely be called “dance,” and comes up with a cacophonous riot of sound that still intellectually challenges. Just a trio comprising two saxophone players and a drummer, with the occasional addition of electronics and vocals, the band sounds far bigger, far bouncier, and, at times, far more intellectual than seems possible. In advance of a show at San Francisco’s Great American Music Hall, Moon Hooch took the time to enlighten SF Sonic about how they got to where they are.

SF Sonic: I read that the Moon Hooch started when you three were busking in New York City subway stations. What response did you get from New Yorkers?

Mike Wilbur: New York is a large place filled with many different types of individuals. Some want to light saxophones on fire, others would rather stare at them through an iPhone. Luckily, there were many who enjoyed moving their bodies to the music we produced and eventually we gained a name for ourselves playing underground. One time a lady screamed in my face and said, “YOU’RE DRIVING ME CRAZZYYYYYY. YOU JUST KEEP PLAYING THE SAME THING OVER AND OVER AND OVER.” Then she violently shoved her umbrella in the bell of my horn.

SF Sonic: Which days were most successful for busking?

Wilbur: Fridays and Saturdays were the most successful days for busking in the New York City Subway Stations.

SF Sonic: After you busked your asses off, you obviously started touring. Touring is not as relaxed as busking, you three have to stick to a tight schedule, I imagine. What aspects of busking do you miss or don’t miss? And how does it compare to touring?

Wilbur: I wouldn’t say busking is easier than touring. When we were busking we were using it to pay our rent and would often play 6+ hours on the subway platform, breathing in toxic filth while trains passed by and kicked up the debris from dead rats and trash. Then we would have to lug the drum kit up multiple flights of stairs and a mile home, both ways. Playing on stages wins.

SF Sonic: Likewise, what are the best and worst things about touring? 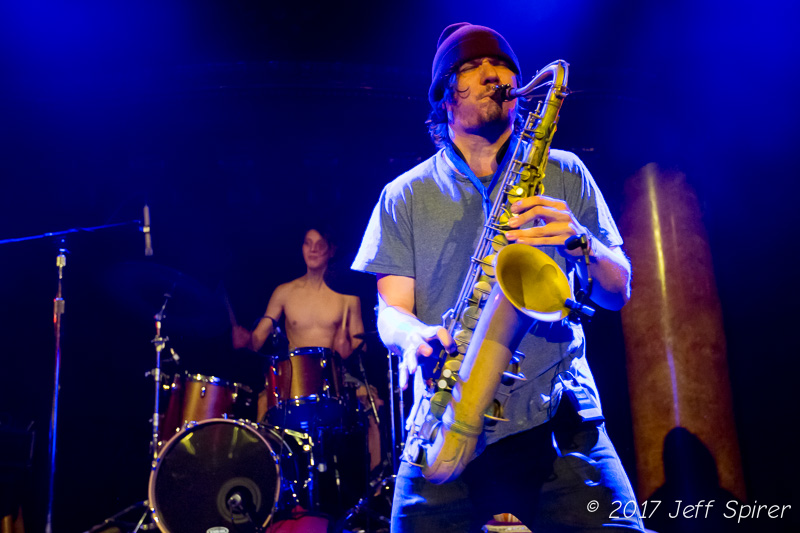 Wilbur: The worst part of touring is the distance from your loved ones you have to endure. The best part for me is sharing our music with people all across the world.

SF Sonic: “The Cattle Dance Party” video was the first Moon Hooch video I saw. However, I think most found out about you through NPR’s Tiny Desk concert series. How did NPR find you?

Wilbur: I’m not sure how NPR found us. I’m guessing through the internet.

SF Sonic: How did the Tiny Desk benefit the band?

Wilbur: Tiny Desk exposed us to almost two million people, which is kind of mind-blowing to me. I can’t even imagine that many people.

SF Sonic: Your album covers feature some beautiful artwork. Do you commission the artwork or is it done by someone you all know?

Wilbur: Our artwork is done by our friend, Ari Warner.

SF Sonic: The “Joshua Tree” EP is awesome, by the way. My favorite off of it is “Improv.” It’s got a death metal edge to it. When recording new music, does it start off as an improvisational jam sesh first or the opposite?

Wilbur: Thanks. It really depends on the state of our collective emotional infrastructure. Sometimes we’re all on the same wavelength so we just come up with things together on the spot and record it. Other times we are not so grooving, so we’ll go off and write something for the others to learn later.

SF Sonic: A good friend of mine saw you three back in November. You all said you had done more shows in the past year than there were days. How do you all have the stamina to perform so often? What’s your trick?

Wilbur: We’re all vegans and treat our bodies well. It’s not really a “trick,” more a decision. Our instruments and music require a great deal of mental and physical stamina so it’s important to us that we don’t fuck ourselves up in any way that we can prevent.

SF Sonic: Who came up with the idea of using traffic cones as saxophones? How did that idea come about?

Wilbur: Wenzl always wanted to make his horn lower. He stuffed a tube in his bell and it dropped down a minor sixth. From that point on the penguins were swimming.

SF Sonic: Can you pick a genre of music to describe what you three play?

Wilbur: We’re kind of like post-Christian speedcore/industrial meets stoner/enviromental punk jazz with a hint of country/fusion heavily influenced by hindustani classical music and K-POP. Definitely a twist of early 2000’s trad emo electro-doom in there.