When Melina Duterte, aka Jay Som, performs Saturday April 22 at The Rickshaw Stop in San Francisco, it will be the last show on what has been a blitzkrieg 24 date tour spread out just over a month. Her latest release, Everybody Works, has received high praise from the influencer millennial sect and more traditional music publications. Duterte’s reserved vocal positioning, scattered among the versatile genre-verse that she chooses to peruse…dream-pop, shoegaze, acoustic-folk and slinky r&b leanings…makes Everybody Works a ten song traverse that casts a mature shadow far beyond her 22 years. The overall conviction in her lyrics of acknowledging how to figure out the everyday musings that make all of us human…sustainable working situations, relationships, and feelings. Anyone with a pulse can connect. The Oakland resident, who wrote, recorded and produced the record in her bedroom during three “heavily caffeinated” weeks, took time out from her successful tour to talk with us.

SF Sonic: For starters, when you wrote and recorded Every Body Works in three weeks in your Oakland apartment, did you  sculpt a record that would tour/play well in front of a live audience? 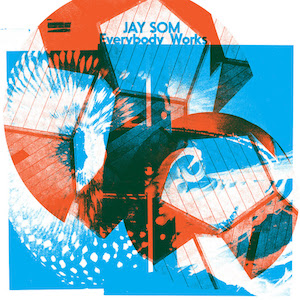 Jay Som: There was some light consideration and general awareness that there was going to be an entirely new audience listening to the record and coming to future shows, but it was mostly an organic process since I was already working on most of the songs before anything really took off. It’s been super interesting to see how people react and respond to the live shows since I’ve been hesitant about how it translates from the record but the response has been generally positive.

SF Sonic: Was the name of the band really formed by a meme generator?

Som: Yes it was, from a pretty bad and random baby name generator!

SF Sonic: So your list of influential artists is really wide-ranging. Phil Elverum from The Microphones, Yo La Tengo, My Bloody Valentine, Tupac, and the undying love you have for Carly Rae Jepsen. I don’t know how they all influenced this record but it is very clear that you don’t like to stay in one mode musically.

Som: I think I just have a love for all types of music, especially funk and r&b since I grew up with those records from my dad’s collection. For this record I went back to listening to music I fell in love with when I was younger, the artists that made me want to make music and generally shaped my musicianship. There’s something so special about reminiscing and freely listening to older childhood music without feeling like you need to break or expand genres to be refreshing in the music scene.

SF Sonic: I love that you  praise Karaoke in your family as a “help” to your singing. And that your Dad was a DJ and you have the tapes of the mixes he did. And he had an afro too?

Som: Yeah! My mom and dad were huge influences and support system for my early musical years. I would raid

through my dad’s vinyl and cassette collections he would DJ with in the 80s and 90s and my mom would constantly sing around me and urge me to get better at different instruments. Yes, he had a pretty awful afro!

SF Sonic: So full disclosure. When I read about the 2016 tour you opened for Mitski and Japanese Breakfast. And you made the connection of being all Asian-American women in indie music, which is mostly white-male dominated. And you felt like you were on a mission. Can you just expand on that macro-realization a bit.

Som: Prior to the tour, I was very aware of the implications and importance of the bill. Mostly young women of color were attending the shows to experience an opportunity that is so rare especially in this political climate. Realizing that reminded me that I’m not just making music for myself and my friends.

SF Sonic: Ok fun stuff. What is your go to restaurant in the SF/Oakland Bay area and what do you order and why?

Som: Haha Okay. I love Burrito Express because they have the most fire chicken quesadillas…Basic, I know.

SF Sonic: Everybody Works is the perfect music to………(fill in the blank)

Som: Dance then fall asleep to.