San Francisco’s very own experimental and anonymous music group The Residents have surpassed the masses in historically exploring all creative outlets in the realms of music and art. With an impressive resume backing their multi decade expansive career, The Residents generate creativity nonstop with the newest addition being a full-length fictional novel called The Brickeaters. As part of the LitQuake literary event held in San Francisco, The Residents recently brought their unique performance to The Swedish American Hall for a special show and also included readings from The Brickeaters with the storytellers projected on an inflatable globe in between songs. The Residents have also released a brand-new studio album called Intruders along with the release of the fan interactive album I AM A RESIDENT! in which they invited fans to cover one of their songs. Ambitiously busy, the band will head to Europe for a tour in early 2019 with so many more projects underway.

SF Sonic  had a chance to catch up with Captain Doc aka Homer Flynn, the president of the Cryptic Corporation, which is the management for The Residents, to discuss all the fun projects the band is working on. You can also catch him and The Residents at City Lights Booksellers in San Francisco on Halloween for a book reading and signing of The Brickeaters.

SF Sonic: The Residents have released a brand new album, Intruders. Considering the lengthy catalogue of albums, can you officially state what number this studio album is for The Residents in light of their 45+ year career?

Homer Flynn: Unfortunately, no. No has done an official count; the last I heard it was somewhere between 50 and 60 but I’m not sure that’s right.

SF Sonic: Quite an impressive amount regardless! After so many albums, was the approach and recording process any different from the previous studio albums?

Flynn: As I’m sure you know, Hardy Fox who is very ill these days, retired a couple of years ago; Hardy was the recording engineer and co-producer for most of The Residents’ albums, so his departure necessitated changes. The new producer, Eric Feldman, works similarly to Hardy in many ways but he also does final mixes with an engineer, Gabriel Shepard, and they fine tune the sound. The result is something of an overlap with early work but also new and different. 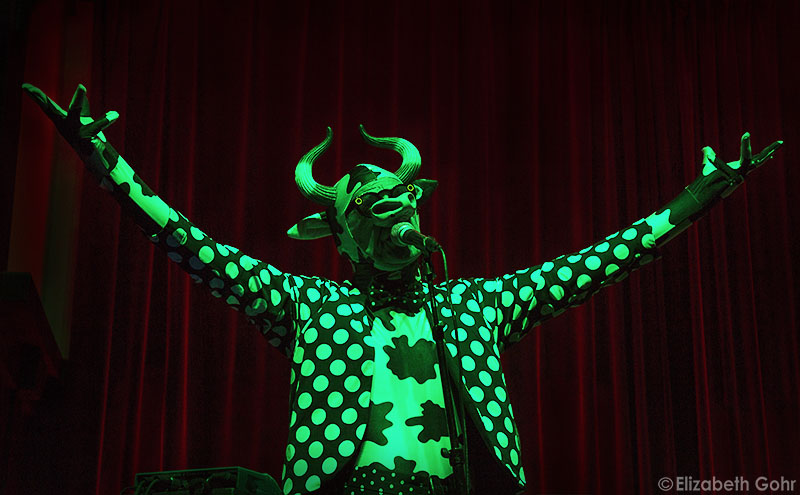 SF Sonic: Indeed, it must have a heavy impact on the band with the departure of such a prominent player. Where was the album recorded and how long did the recording process take?

Flynn: The album was mostly recorded in several home studios and finished in Eric’s studio. It took place over a period of about six years with a lot of the material having been written in the summer of 2012; more was added over the intervening years but it didn’t really come together until they hit upon the Intruders idea as a unifying concept about a year or so ago.

SF Sonic: Speaking of the concept behind Intruders, the context entails ‘alternate beings stalking the corners of our consciousness.’ Did this stem from specific characters intruding the minds of The Residents or merely pure fictional fun?

Flynn: Both. Some of it comes from The Residents’ personal experiences, some is purely fictional. You’ll have to guess which is which.

SF Sonic: Besides being known as president of the Cryptic Corporation, you also take on the responsibility of lead graphic designer for The Residents. Can you elaborate on the album artwork for Intruders with the cover being a mouth wide open with a face in it?

Flynn: There was a lot of back and forth with the group as to how the idea of “intruders” could be visualized. It needed to represent a persona that was inside another person, with some of them being sad, some angry, some happy etc. While a brain was generally considered to be a more appropriate vehicle for encasing the “intruder,” a mouth was ultimately more visually appealing.

SF Sonic: Earlier in the year when The Residents were on tour, they introduced three new songs that were to be on an upcoming blues album. Does this mean that another studio album is in the works and is there any insight you can give on it?

Flynn: There is a new album in the works. It’s based on a blues singer from the late 60s and 70s who seems to have vanished. There’s not much more that I can say at this point. 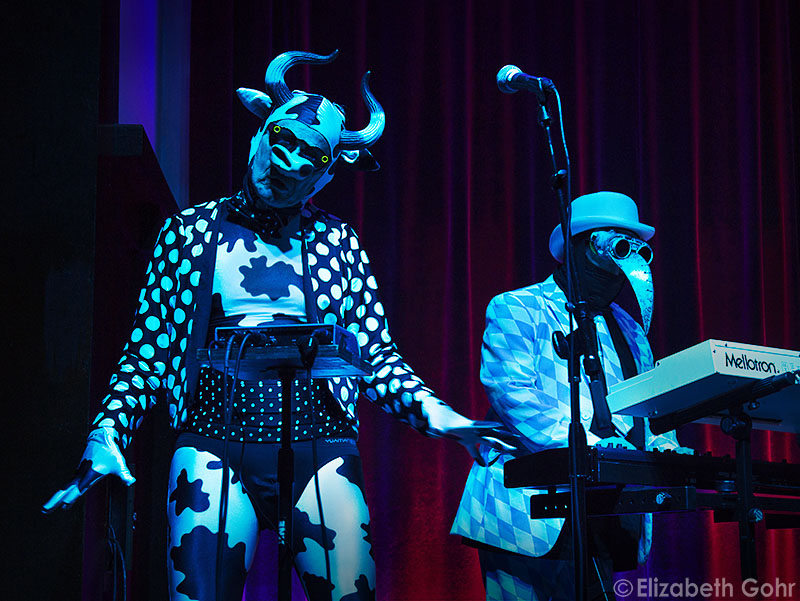 SF Sonic: Another album recently released was the ambitious project, I AM A RESIDENT! in which The Residents asked fans to submit their cover versions of any Residents’ song. Did the submissions live up to the expectations of The Residents?

Flynn: They greatly exceeded The Residents’ expectations. That’s why they went back and rethought the concept, resulting in an album length mashup instead of just a collection of songs, which was the original idea.

SF Sonic: On the I AM A RESIDENT! album, The Residents also provide their own material and “reinterpret their fans’ interpretations.” Can you explain the meaning of that statement, are the songs on there reinvented or completely original?

Flynn: Both. While the fan songs were reinterpretation of Residents’ original, the group also wrote and recorded new vocals that they felt help clarify and unify certain parts of the album.

SF Sonic: The interactive project also included two winners of the ON THE BUS! reward in the I AM A RESIDENT! PledgeMusic campaign. What was it like to have a fan on the bus with the band and also incorporating them on stage?

Flynn: It was very satisfying both for the band and the fans. As you might expect, there was a little anxiety about letting strangers into their inner circle, but the fans were extremely respectful; one was also an excellent trumpet player.

SF Sonic: During the In Between Dreams tour in Brooklyn earlier this year, the band got shut down by police for a noise complaint from a neighbor of the venue and before the loud music curfew of 10PM. What was the reaction like for the band and audience in lieu of this unjust enforcement?

Flynn: People were upset but thankfully not at the band; if anything, they were sympathetic that The Residents had to stop mid-show. There was never a clear explanation of what happened and exactly who complained but whoever it was apparently had the power to get the cops out 30-40 minutes BEFORE the noise curfew.

SF Sonic: Very disturbing to hear such news, has this venue ever had a history of noise complaints or was this their first? Also were any apologies issued considering the police did not abide by their own law?

Flynn: To my knowledge there was no history of noise complaints and, of course, no apologies from NYC’s finest, just the threat of confiscating The Residents’ equipment if the shutdown was not immediate.

SF Sonic: The Residents’ ever evolving creativity has extended to the completion of a novel entitled The Brickeaters, how long has the novel been in fruition and what was the writing process like for The Residents to tackle as a collaborative effort?

Flynn: The book was mainly written while the group was on tour; it started during the Talking Light tour in 2010. The inspiration was two articles in the NY Times, both printed in July, 2010. One was about a career criminal who had just come to an unpleasant end; the other was about internet content screeners. Most of the writing was done by one person, but the ideas were collaboratively tossed around and polished on tour; that’s usually when they spend the most time together.

SF Sonic:After getting to hear excerpts from the book at The Swedish American Hall, the backstory behind the title of the novel, The Brickeaters, seems to be metaphorical in sense. What can you share on the background to the title and the overall moral to the story?

Flynn: I think any moral the book may carry is more of a comment on humanity than anything else. One of the passages that was read was the criminal telling a story of having eaten a brick, more to prove a point than anything else. In titling the book The Brickeaters, The Residents are painting all the characters with the same brush, and, by extension, including all of humanity, including themselves, in that metaphor of total and utter futility.

I think The Residents would say we currently have The Ultimate Brickeater currently living in the White House.

SF Sonic: The last time we spoke you mentioned that God in Three Persons is being reworked as a theater piece, a one man show with puppets. Can you touch base on the status of this project?

Flynn: The project has continued to evolve. The Residents are currently working with John Sanborn, a very accomplished video artist, who will be creating highly stylized backgrounds for the production. If all goes well, it will be having its premier around Halloween, 2019, but that’s all I can say right now.

SF Sonic: It has also been stated that another project that The Residents are working on in the form of a film is a reboot to Vileness Fats entitled Double Trouble, what can fans expect from this?

Flynn: The idea is not so much of a reboot or reworking of Vileness Fats but as a recontextualization of the original material into a brand-new screenplay. The inspiration for it came from the film A Double Life, which won an Academy Award for Ronald Coleman in 1947. At this point, hardly anyone remembers who Coleman was, but he’s a Hollywood legend.

SF Sonic: So aside from a novel, new albums and prereleases, a tour in Europe, a puppet show, and feature film, is there anything other exciting news in the world of The Residents they would like to shed light on?

Flynn: No, that’s about it for now.