Guinevere Q, her bass, her voice, and her primary band The Wyatt Act can be seen around the city playing quintessentially eccentric San Francisco music. With roots in poetry, jazz, and rock, The Wyatt Act crosses lots of boundaries. The quick changes and unusual instrumentation blend perfectly with Guinevere’s slam poetry-derived lyrics. SF Sonic had the opportunity to put a few questions to Guinevere recently.

Guinevere Q: I started out as a performance poet competing in slams and hosting open mics. That was my original role in The Wyatt Act. I would run around the room delivering poems while the band played. We needed a bass player. Back in 2012, we took a trip up to Portland to check out the music scene. Jason Young Sun surprised me with a bass! I fell in love with that low-end sound, the feel, the rhythmic pulse – it was like having a super power! Been playing ever since. 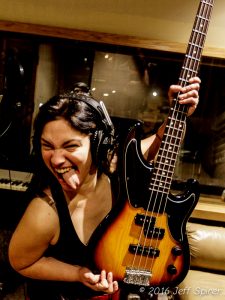 SF Sonic:You seem to be playing with a lot of bands. Which ones are currently active?

Guinevere Q: I’m currently actively writing, rehearsing, recording, and playing with The Wyatt Act and Doctor Striker. I also sing vocals in Project Queue and play bass and sing in Revolushn, the Kevin North Band, and with Matt L. (of The Welcome Matt). Jason Young Sun and I just started a comedy rock duo called SUNQ.

SF Sonic: The Wyatt Act is dubbed a “SlamRock” band. Can you give us some insight on what that means?

SlamRock is a philosophy, a lifestyle, an attitude, a swagger. SlamRock is a reaction to a society of detached, automatic, alienated, civilized play-acts. SlamRock values process over product and interaction over isolation.

SF Sonic: The Wyatt Act has an interesting lineup and truly excellent musicianship, especially with some of the quick changes inside the songs. How did you put the band together?

Guinevere Q: I used to host a weekly Open Mic at Brainwash (RIP) with Jason Young Sun. That’s where we met Breakfast (multi-instrumentalist Breakfast B. Breakfast). We began playing music together and started to form our own sound. It was kinda like Weird Al, Mr. Bungle, Amy Winehouse, Cake, and Rage Against the Machine. Breakfast and Karissa (trumpet player McKelvey) met through The Brass Liberation Orchestra, San Francisco’s street protest brass band, and we quickly started developing a style that combined our love of theater, street protests, poetry, and augmented chords. A lot of our shows involve audience participation around specific themes because that’s how we initially engaged with the Activist and Open Mic communities. 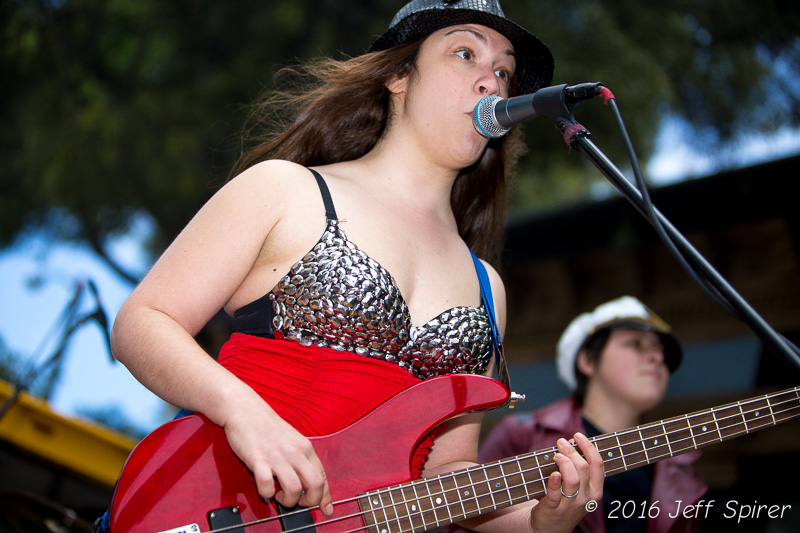 SF Sonic: How did The Wyatt Act get its name?

Guinevere Q: We love puns 🙂 It’s like “The Riot Act” except it’s Wyatt Earp! I once hand wrote the entire riot act onto a large scroll and read the whole piece of legislation to the audience over music. It’s ridiculously long! So now we can say that we’ve read the audience the riot act.

Guinevere Q: Yes! We recently recorded some new tunes at Hyde Street Studios in San Francisco. We will be releasing them once they’re all mixed and mastered and rubbed with lotion.

SF Sonic: What do you think about today’s music scene in San Francisco? Are the changes in venues and the demographics of the city affecting you?

Guinevere Q: There’s a very specific San Francisco sound emerging from the scene right now. It’s especially strong in the open mic community. I’ve been trying to capture it in “Vibrations by the Bay,” my weekly playlist of currently gigging and recording San Francisco Bay Area musicians. I love going out to shows and playing live! I’m part of a meet-up group called “Freaky Awesome Shows” where we go out to enjoy live music together. It’s really fun! I also appreciate the love and support from the business side of the Music Industry with “Balanced Breakfast” – a morning meet-up group of musicians and music industry professionals which started here in San Francisco.

As far as playing venues, I’ve learned that some of them are more fun than others. I love playing Bottom of the Hill, Boom Boom Room, Neck of the Woods, and The Starry Plough because they have great sound and they treat musicians fairly. I also really enjoy self-producing my own events and plan on continuing that vision this spring. I’m very grateful for the opportunity to pursue my passion full-time. There’s no greater feeling in the world! Still, it is quite challenging to survive financially in San Francisco as a full-time musician because the cost of living is astronomically higher than the payment for playing shows and session gigs.

We’ve all witnessed countless talented artists get priced out of the SF Bay Area as a direct result of the income inequality that accompanied the unregulated tech boom. To clarify, I’m not a Luddite – in fact, I’m inspired by new technology and optimistic about the future of the music scene – I just fear that the extreme wealth gap that currently exists will prevent the art scene from rising up to its full potential. These days, I’m just trying not to get run over by an Uber or a Google Bus. I’m always hustling to get by and lately that means booking shows out of town because the compensation is higher than most of the venues in the SF Bay Area. 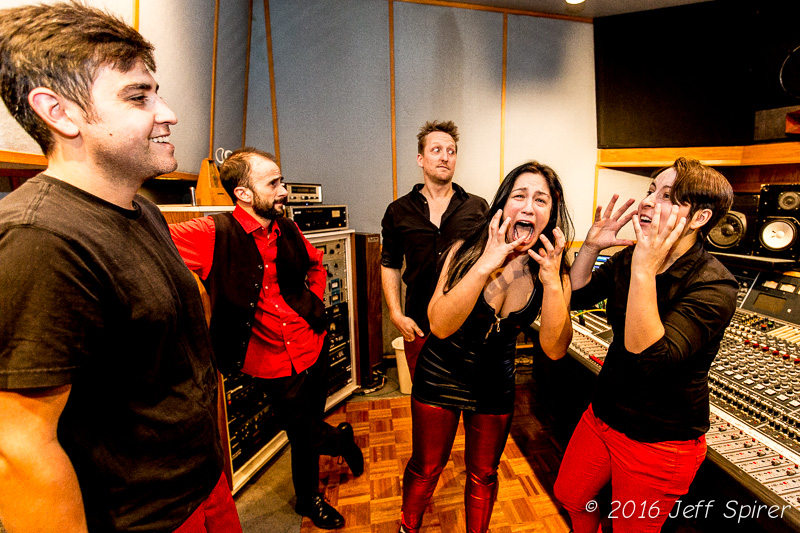 SF Sonic: Where can our readers see you in the next couple months?

Guinevere Q: Got a heap of gigs out of town ‘cause I gotta pay that rent, but here in the San Francisco Bay Area, I’m playing :

Listen to “Push” by The Wyatt Act:

Cover photo by Kaitlin McSweeny. Other photos by Jeff Spirer.