On Laisse ça être, the band produces stringent audio constructs that pogo between minimal, experimental and surreal. While the cinematic expansiveness of what used to be Stereolab lurks in oblique corners, Aquaserge hangs their creative hat heavily on the surrealists and Canterbury scene.

We recently had the pleasure to talk with Audrey Ginestet, bass player from the band, about Aquaserge.

SF Sonic: Laisse ca etre is a cinematic and grand audio offering. A beautiful record. From the David Lynch burlesque on “Charme d’orient”, the sideways funk of “Les Yeux Fermes” and the existential anticipation on “Virage Sud.”

SF Sonic: If you owned a record store, what section would you file it in?

Ginestet: It’s a good question. In fact we don’t know. It could be a French section, I mean, we sing in French and I believe that unintentionally our sound has something like a French color or atmosphere too. Does the French section exist in US ? I am not sure, but in Japan yes for sure! Broadly speaking, I guess that it would fit in an ‘indie rock’ section.

SF Sonic: Being that Aquaserge is a combination of several other groups, musically how would you categorize the identity of this band?

Ginestet: Recently a friend asked us to count how many people have played with us, live and in the studio. Over ten years, it adds up to around 50 people. We tend to see Aquaserge more like a collective than simply a “band.” So yeah, Aquaserge is a collective of musicians, a tribe that enjoys pushing their own boundaries, musically. But not only. It’s also about poetry, literature, cinema, politics too.

For the live performance there are 3 versions of Aquaserge, I know it’s confusing, but it seems that we find our freedom and space for creativity in this chaos/nebula of projects and people. At this stage a family tree would be necessary. Anyway.

Then the other groups. The list is long and incomplete.

Our former drummer Julien Barbagallo is an exceptional drummer and a multi-instrumentalist. He drums 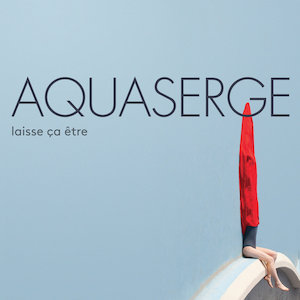 with Tame Impala and started a solo project. He is with Aquaserge for all the studio sessions. Julien Gasc played keys and backing vocals with Stereolab and worked with Laetitia Sadier (lead singer of Stereolab) on many of her albums. He is a multi-instrumentallst too and loves studio work. If you check out his credits, you’ll find him on many French underground albums.

Benjamin Glibert, who runs in the shadow of the Aquaserge submarine, played with Melody’s Echo Chamber as a bassist. In Aquaserge, he plays guitar, some bass, and is the engineer/ producer for the Aquaserge records since the early days. He also produces others French bands like Forever Pavot and played with Moodoid. I play the bass and sing, I took part in several Acid Mothers Temple albums, the Japanese psychedelic band, as a singer. And Makoto Kawabata, the Acid Mothers Temple leader, plays guitar on our new album. I am also a sound engineer for cinema and taking part in the sound production on our records.

So it’s not so much that Aquaserge is a combination of other groups, but rather that the nucleus of Aquaserge has participated, and will continue to do so, in many other musical adventures around the globe.

SF Sonic: Indeed. What are some of this groups and inspirational artists that you find yourself making references to?

SF Sonic: So Audrey… You directed the video for “Virage Sud.” Was this your first time directing?

Ginestet: Yes and no. Yes it’s my first music video. And no because I’m a film maker. I directed two documentaries: Dokonan, Acid Mothers Temple on Tour in US from 2007 and Spring Yes Yes Yes from 2012.

SF Sonic: What enticed you about the image of the band nodding and swaying to the song to be the concept of the video?

Ginestet: I had a vision. I saw the face of Julien Gasc , in cinemascope, nodding to the tempo of this piece while closing his eyes. I thought the whole video could be that. The faces of Aquaserge and nothing else. These 6 faces are the face of the band’s nucleus, including Julien Barbagallo, the first face, who brought the melody of Virage Sud. Filming faces that listen to music has something magical, the face is the mirror of the soul. It was both a challenge, and a fairly simple idea to execute. As a reference, I thought of the film by Bruno Dumont, Hors Satan.

SF Sonic: What is the title “Laisse ca etre,” translated in English to “Let It Be,” in reference to?

Ginestet: It’s a long story… A moviemaker shot during all the recording sessions we did for “Laisse ça être,” three 10-day sessions, for a documentary which will be released in few months. It’s a movie about the process of making an album, but also about the collective creative process in general. It was crazy to have all these people working together in the studio. The movie crew and the band, plus all the guest musicians who came during the recording. Check the credit list. The Beatles had this crazy idea to make a movie during the recording sessions of Let It Be. But it did not work for them. We thought that if we could succeed, we will call it Let it be in French.

SF Sonic: Last question….Fill in the blank.
Laisse ça être by Aquaserge is a perfect record to…..

Ginestet: TRAVEL IN YOUR MIND.

To find out more about Aquaserge, check out their website.