The music of MetronOhm is a much needed dose of tranquility in this chaotic world. Their output is small, but enough to get a listener thirsty for more. Their current lineup consists of a close, tight-knit group of friends. This cast of characters includes Annabelle Maginnis (mandolin, vox, violin, guitar), Kofi Asare-Aboagye, (vox, guitar, pocket piano), and Hunter Craig (bass). We got a hold of Maginnis to briefly discuss their entrancing sound.

SF Sonic: What is the origin of the name MetronOhm? How did you all come up with it?

Annabelle Maginnis: We had been thinking about a new band name for a while because we had just been told that our old name, “Act Natural,” had already been taken by another band and they already had music out on a ton of major platforms. So, one night we’re still at a loss for a band name but we need one to apply to play this music festival, Broke LA! In an act of desperation, Kofi [Asare-Aboagye] indiscriminately named items in my room, one of which was the metronome I’ve had since I was about 10 years old. Of course, we decided to spell it all funky!

SF Sonic: How did you come to meet and begin this group?

Maginnis: I met Kofi about five years ago at a house party my roommates and I threw our sophomore year of college. He’d already visited my place several times to see my roommates but I hadn’t been there so he 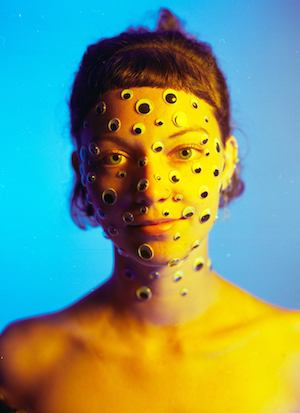 was surprised to see me playing music for people in my room and sitting comfortably on a bed he didn’t think was mine. He asked what I was doing there. I just smiled and asked “What are YOU doing here?” and we’ve been tight ever since! Kofi would come over periodically to play music with me. Neither of us had ever played with anyone else before, so it was awkward at first but we enjoyed each other’s company and patiently let our talents develop. About a year later, after playing an event together we decided to become a band!

After graduation in 2015, I moved to LA and Kofi followed suit in 2016. After about two months playing music together in Los Angeles, we met Hunter [Craig] through our main bassist at the time, who recommended that we use Hunter for a gig that he couldn’t play with us. Hunter only had two day to learn the songs we were going to play with him and he absolutely nailed it! Kofi and I both asked each other at the same time “Can we keep him?” We feel super lucky that he wanted to join us too!

SF Sonic: MetronOhm’s core members are you, Kofi, and Hunter. However, you have worked with other musicians in the past. How do you pick and choose the people you work with?

Maginnis: Mainly, we scout for musicians at the many local shows we attend. Sometimes we invite musicians to jam with us and we continue to work with the ones that we gel with! We’ve been so lucky to have an array of musicians volunteer their time and talent, from percussionists, to cellists, to bass players, to saxophonists!

SF Sonic: Your EP Matter, though only five tracks, is packed with both objects that can be seen and experienced, like birds and rabbits, and abstract concepts like the mind and spatial differences. Can you elaborate on how you all write songs?

Maginnis: Most of the songs in Matter were either written by myself or by Kofi. I wrote in moments of inspiration in solidarity with nature, but “A Bird’s Trill” was the result of Kofi fusing one of his ideas with mine. Kofi wrote the closing track to our EP, “Goodnight,” as I took a nap in the same room! Moving forward we’ve been writing more with Hunter at my house (our rehearsal space) and at the studio with our producers Rachel White, and Teddy Rosenthal (Teddy Roxpin).

SF Sonic: You land in one time period on earth. Which time period do you want to share your music and get the best reaction from your fans?

Maginnis: 2020! Because we have excellent vision.

SF Sonic: What are some instruments that you want to feature on your future releases.

Maginnis: More use of synths and vocal harmonies seem fitting for the direction that we’re moving in. We also want to start collecting and utilizing samples collected by us and our friends on our adventures! It’s been a pleasure to record an acoustic sound we are excited to explore the possibilities that studio technology has to offer!

SF Sonic: Speaking of which, when are we going to see hear new MetronOhm stuff?

Maginnis: We’ve got some goodies headed your way soon! You can expect to hear from us Winter 2017/2018. All release dates will be announced promptly on our Instagram, Facebook, and Twitter (All @MetronOhmMusic) or better yet, sign up for our newsletter for early access to new recordings as well as videos to come!

SF Sonic: Are you going on tour soon?

Maginnis: We are booked in Los Angeles through New Years, but as we release more music we will go to towns that show interest accordingly! We will likely revisit San Francisco early in the new year and we also have plans to return to Austin, Texas for SXSW in March.

SF Sonic: For those who have not heard you, how would you explain your music?

SF Sonic: And finally…Best place to eat in LA?

Maginnis: If you’re ballin’ on budget like us, the taco truck game in LA is insane! (and oh so cheap!) Go getcha some!

Listen to “Matter” by MetronOhm: