Andy Suzuki and Kozza Olatunji-Babumba met while they both were attending Brown University. In the ten years they have spent making music together in New York, they have been quite liberal with their influences…folk, hip-hop, pop, R&B, and soul. That practice has led them to constructing “The Glass Hour,” an invigorating and fluid Juny Mag produced release. It showcases what the group describes as a “future-pop” aesthetic. Mag has worked with the group in the past, in addition to playing keyboards for Beyonce, Queen Latifah, and Kelly Rowland.

Suzuki, who is half-Jewish, half-Japanese, not only comes from a diverse a background, but his vocal presence champions the multiplicity of various artists that have inspired him. Add to that Kozza Olatunji-Babumba, who is the grandson of Grammy-winning percussionist Babatunde Olatunji, and you have a group that, according to the band, “is aiming for nearly every place on your radio dial.”

SF Sonic recently had the pleasure to speak with the band, which calls itself Andy Suzuki and The Method.

SF Sonic: So immediately it’s quite apparent that Andy Suzuki has strong vocal chops. Who are some the vocalists you grew up listening to that influenced your style?

Andy Suzuki & The Method: I learned to sing by listening to Usher, Boyz II Men, Dru Hill, etc. All the good stuff. From there, when I started writing songs, I was listening to a lot of early John Mayer, Amos Lee, and super early proto-Jason Mraz. I’ve also always been a big fan of hip hop. So if ‘The Glass Hour’ seems like it draws from many different genres, that’s probably why…

SF Sonic: In the midst of this album, which has an R&B foundation, it stretches out into other genres, quite organically. You have “Shelter” which starts with a slow jam feel and then incorporates a choir of sorts. How did this track come about…? Can you talk about lyrics and song construction?

Andy Suzuki & The Method: Most of the tracks on ‘The Glass Hour’ started as acoustic demos that Kozza and I wrote together in NYC and then gave to our producer, Juny Mag, in LA. Shelter was one of the first songs on the album that Kozza and I wrote based on a track that Juny Mag made. I was on a trip to LA, coming down with a bad 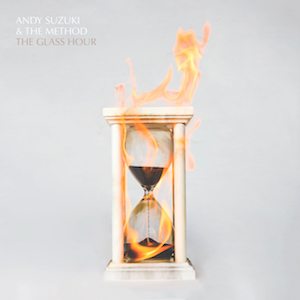 cold, and Juny played me his draft of the song, and I didn’t really know what to make of it. But the very first thing I sang that night was the chorus of the song, exactly as it is now. We tried to change the lyrics because we overthink everything, but nothing felt as good as the original. Then I went back to NYC and Kozza and I wrote the verse. Adding the gospel choir started as a kinda funny joke, and then I demo’d it on my computer, singing all of the parts, and it sounded rad. So we hired a gospel choir, which sounded way more rad. I think I initially sang the word “shelter” because I was just getting sick and feeling like I needed some love. As Kozza and I sculpted the words and the meaning, it eventually turned into that love song that everyone wants to sing to the person they want to be with, but doesn’t have the guts to.

SF Sonic: How would you describe the sound of Andy Suzuki & The Method.

Andy Suzuki & The Method: We call it future-pop with an R&B edge. What do you call it?

SF Sonic: I would opt for anthemic R&B, but your assessment is just a skosh more succinct.
How did it come about that Juny Mag stepped in to produce the release? Was there a certain artist he worked with/produced that caught your ear?Where was it recorded?

Andy Suzuki & The Method: Sometimes the best stuff is right under your nose, and you don’t even realize it. Juny Mag has been a homie for a long time and I’ve been hiring him as a keyboard player for gigs and recording sessions for years. He always mentioned that he was also a producer, and when we started looking for a producer for The Glass Hour we reached out to him. He demo’d a verse and chorus of ‘Searching’ and we realized that we found the guy. Our producer search ended right then and there. He is based in LA, and did most of the arrangement/production work over there. Kozza and I wrote most of the songs in NYC and while on tour in various cities, and we recorded vocals and a few other instruments at various studios in Brooklyn, NY.

Listen to “Runaway” by Andy Suzuki & The Method:

The Glass Hour can be purchased from Amazon and iTunes.