“I think vampires are different from human beings, but they’re sentenced to eternity on this planet. They have the same confusion about love and permanence, integrity and denial. These qualities really are the same in vampire characters as in humans. I think they’re universal themes.” ­—Alexandra Cassavetes

The vampire action film Vampariah, by San Francisco film maker Matthew Abaya, is an exciting spectacle, a tour de force which looks like it was made with a Hollywood big budget but instead was shot on a shoe string, which is mind boggling. Typically, most indie film directors do almost everything themselves, use a skeleton crew of actors, minimalistic sets and if there are special effects, they are more implied then shown.

I was shocked to see in the credits there were hundreds of people who worked on the movie, and given 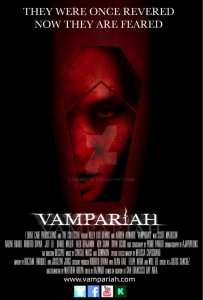 the amazing final end product, it makes sense. The big question is how the hell Abaya managed to do it. The actors are all young, talented, and good looking, like they came off moonlighting from the set of some CW TV show. The go-for-broke, eye popping special effects are everywhere, blending seamlessly in the movie. The set locations are lush and expansive, spanning the globe from San Francisco to the Philippines. Music from local California bands (Dominion, Suicide Queen, Seeking Empire, Cynical Mass, Mich0n, Kulintronica and Armor Rapista) pump throughout the movie soundtrack and sound like bands from a major label. The soundtrack has a San Francisco goth and metal theme as many of the bands such as Suicide Queen and Seeking Empire play in the Bay Area, so it’s quite fitting they are on the soundtrack of the SF-based movie.

This is not a typical vampire movie. It’s something much different, an innovative concept that is turning the genre upside down.

Vampariah is a movie about aswangs, a terrifying legendary monster whispered about in countless ghost stories in the Philippine culture for decades. Abaya conceived the idea based upon a short film Bampinay he directed in 2003. The director says he came up with the story when a friend told him she had “an experience where a man in a passing car had made rude comments and disgusting gestures toward her. I shared a scenario where she took the form of the aswang, a type of vampire in Filipino folklore, and eviscerated him. Just then I realized that I had laid down the foundation for a horror film with an underling theme of self empowerment.”

Kelly Lou Dennis plays Mahal, a vampire hunter who suspects her boss Michele Kilman (Arlene Joie Deleon) is harboring dangerous secrets Her biggest competition is vampire hunter Kilmore (Scott Mathison) who is stealing work away from her while sexually harassing her. It is only while pursuing the terrifying creature called Bampinay (Aureen Almario) who is a serial killer on a moral killing spree in San Francisco, that her world turns upside down.

Bampinay is an Aswang, a self segmenting vampire that spouts bat-like wings and uses a long piercing tendril tongue to eviscerate victims and drink the blood from the embryos of pregnant women. Bampinay takes a curious interest in Mahal and the two take on a love/hate relationship that leads Mahal to the shocking revelation that no one she knows can be trusted and everything she thought as the truth, is wrong.

Vampariah is a phenomenal piece of entertainment that holds up to repeated viewings. The movie premiered at the Great Star Theater in San Francisco on September 3, 2016.