Legendary Turntable Queen DJ Pam the Funkstress passed away Friday, December 22, 2017 due to organ failure. Pam the Funkstress was known for revolutionary work with Oakland hip hop collective The Coup and duo Conscious Daughters. Inventor of the Titty Scratch… Missy Elliot, hope you are reading. She’s had people dancing from outside the club, watching through the window. 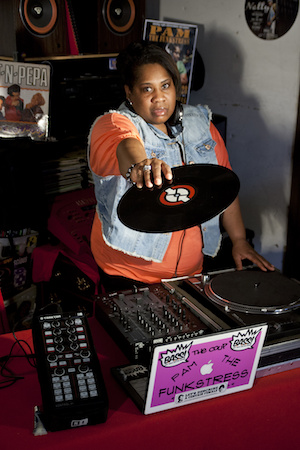 Pam Warren’s talent served fierce flavor from turntable to the kitchen table. Two years ago, she was working at her family restaurant, Piccadilly Catering, when she received a call. She had mixed her way into Prince’s heart at a KBLX fundraiser and Prince asked her to DJ his after party! “I mean he hit some keys that just … it was a one man show. And then when he said, ‘DJ, give me a scratch’ and then I scratched and he looked up…me and him just had a connection,” Warren recalls. She earned the entity name Purple Pam, though Prince respectfully referred to her as T.Q., shortening her Royal moniker. Prince was being Prince, sourcing the funkiest talent from Oakland. Warren geeked out and has said she was the founder of a Prince fan club where she was the President. From fan club President to living the dream of millions of fans or fams to actually playing with Prince. (Prince did not like to consider those that love him fanatics, rather, his family or “fams”)

“Prince is a special kind of guy, to be in his circle you have got to be special to be there. He picked me, talked to me, sang to me, put me up in the finest hotels. I feel like I’m one of his kids. Prince knows talent… I’m one of his angels,” said Warren, in humble amazement.

Turntable Queen’s outstanding goal was to DJ for Missy Elliot. DJing for Prince catapulted Warren’s club career into aspirations of experimental EDM and opening up a DJ school for young women. Prince’s death left Warren heartbroken as she tearfully shared her story of receiving custom purple scratch records ready to play for their planned tour. “I still can play them in his honor, I’m always gonna be Purple Pam. That’s my name now,” said Warren to KPIX-TV back in 2016.

She was an epic warrior in the battle DJ realm. Such a phenomenen, she won often, which caused her strife when it came to making fellow DJ friends.“Just being there was more important than winning,” said Warren. “I’m not a Battle DJ, I’m a Party Rocker!” There was a lot of smack talking and beef that Warren didn’t vibe with, though many respect her immensely – the battle realm was not cooperative.

The West Oakland community hosted a candlelight vigil in remembrance of Warren on December 27. A young DJ came to speak and share how he was in a DJ battle while becoming houseless, and met the Funkstress. She offered her home for him to stay. Warren had a heart of gold. She was always glad to help aspiring youth, she performed at so many fundraisers for causes for KBLX and Breast Cancer Awareness, to name some. Having just won the battle, the young man asked her how much rent was. Warren said, “Don’t worry about it.” 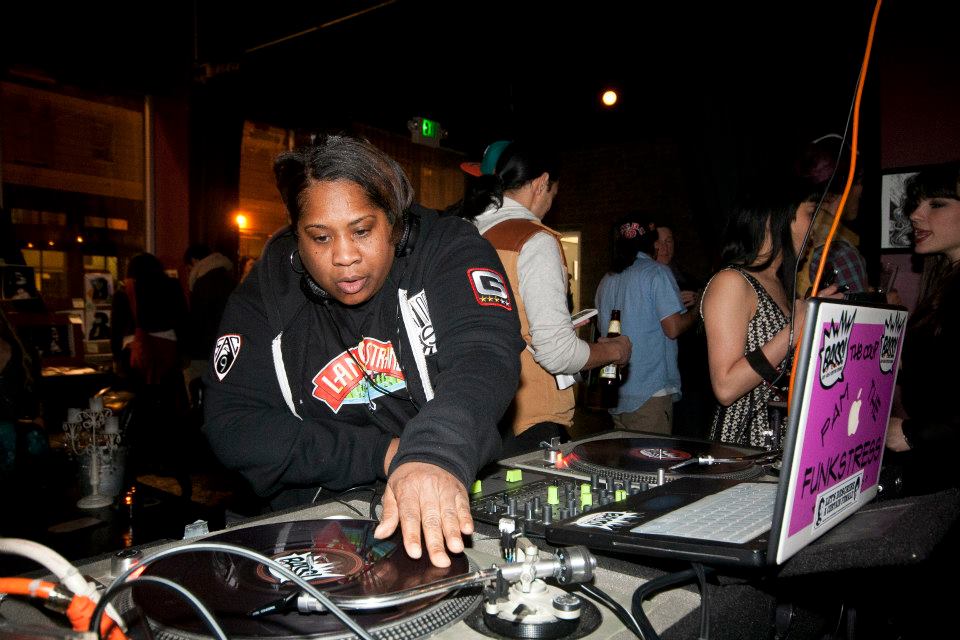 “Being a female back in the day was challenging,” said Warren. “When I came into the game in 1988 there were really no female DJs. It didn’t really start until Salt-N-Pepa and Spinderella. There’s been a few like Jazzy Joyce and Coco Chanel. Until ‘94 when the Coup came around and were able to create something. I wanted to be the first female DJ on the West Coast, like Spinderella was on the East Coast; being in the male-dominated field, it became pretty challenging… I was always compared to Spinderella because there was really no one else to compare me to. I tried to offset that, I have much respect for Spinderella but we’re two different DJs. I’m on the West Coast, she’s on the East Coast. I’m more of a scratcher, and she’s more of a mixer.”

Pam the Funkstress was beyond impressive. She was symbiotic and had a collective mind. Boots Riley of The Coup reflected on her impact in a Facebook post:

“In 1992, I went looking for Pam to invite her to join The Coup. She was DJing Tupac’s first album release party at a venue in SF that is now The Gold Club. That night, there was a giant storm. Rain was pouring down like crazy. My boy Rob Ebow was driving me and his car broke down in the center lane of the Bay Bridge. We got out and got the car started. We were on a mission. 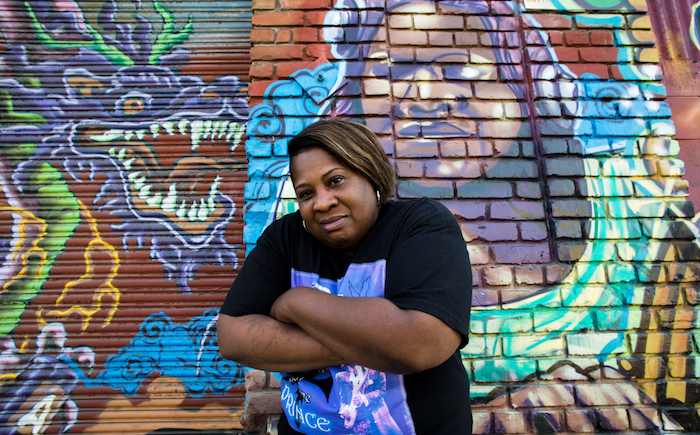 When I got to the party- I was soaking wet from head to socks, due to the bridge adventure, and I was leaving puddles everywhere. Pam was on the tables and Tupac was leaning over talking into her ear, and she was just nodding to him like ‘I got you.’ Maybe it was a request or something. I waited around for the right time to talk to her and after watching Tupac dance with Yo-Yo to his own song, I headed over to Pam. I said. “I don’t know if you remember me-.“ She looked at my awkward, soaked outfit and said ‘I remember you’ but the look on her face said ‘I remember your wack ass show from last year.’ I told her we were in need of a DJ and she told me that she was working right now. I was persistent and called her everyday for a week until she came and met with me and E-roc. I don’t really know what made her join us at that time, but she did and my life was changed forever.”

Riley released this statement just after the candlelight vigil hosted by the community in West Oakland. Many compared Warren’s life to a hurricane, all shook up by her power. She was always on the move and her turntable skills thundered. The vigil was hosted in front of a mural of Pam the Funkstress, on 30th and West, the same place the writer of this article last saw Warren during a photo shoot.

Warren was not feeling well the day of the photo shoot though she was such a motivated person she pushed through her pain to do her usual commute from Foster City to Oakland she had a few creative endeavors and meetings to complete. Asked her to take it easy…though it was a busy time. There were Halloween parties galore and she was planning her own birthday party for November 17 at Club 44 in Berkeley. She was also excited to be in a print magazine. The photo shoot was a breeze, and there was talk of doing another one when she felt better. The team walked Warren to her car, and she wanted to showcase what she was listening to.

“This is one of my favorite Coup albums,” Warren said as she displayed the CD Genocide and Juice. “I wanna call E-Roc and get the whole crew back together for this one.” She started to play through all the songs … “Fat Cats,” “Pimps,” “Takin’ These,” “Hip 2 tha Skeme,” “Gunsmoke,” “This Ones A Girl”… She reflected on the times she shared growing up with The Coup. 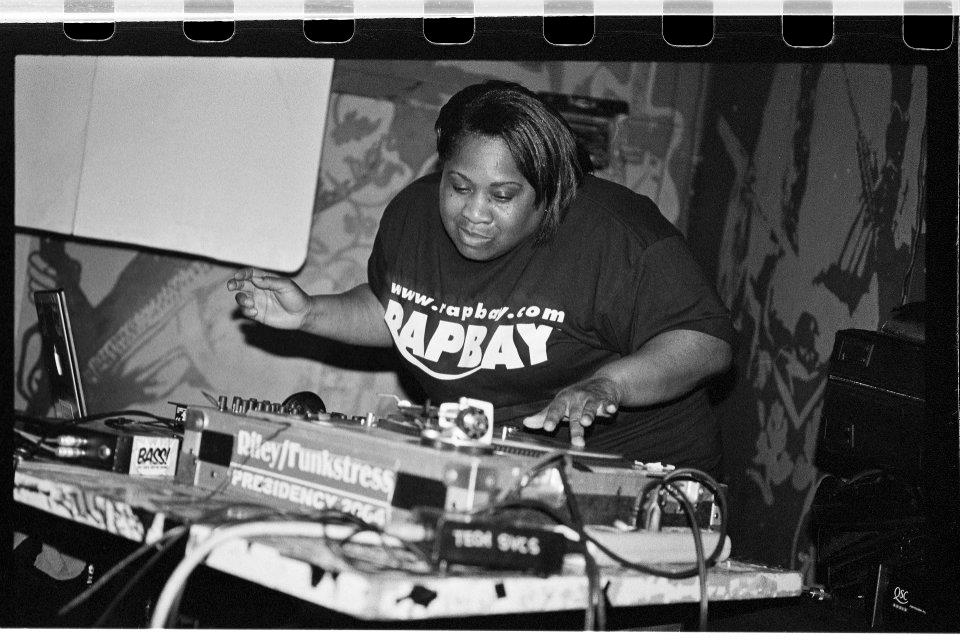 “Boots is a special person just like Prince. Musical geniuses are very rare. And I put him in that category,” said Warren.

“It’s an honor to be a part of The Coup. We have our own sound and our own name. The Bay Area has its own sound. When you’re coming from the Bay that’s big. We have our own little world, we created the hyphy movement and have a lot of hip hop artists here. There’s a lot of talent in this Bay Area. To be a part of that history, I’m blessed,” Warren reflected.

After Warren stopped touring with The Coup, she continued her DJ career performing at clubs and private parties. In the Mix with Pam the Funkstress on KBLX made her a household name. People knew to listen in Fridays for the DJ legend. The party that Warren brought is a party that leaves her audiences in awe. On stage, from a DJ booth, on the radio, wherever. She compromises nowhere, be it in a large or small gig, she’s a legend. There is this spark that ignites when someone of Warren’s caliber performs. When the Funkstress lost herself in her spark, it was superhuman. At her vigil, the attendees were asked to find a DJ, not just a woman DJ, but any DJ that could “fuck with Pam.” You would think that would be easy, but she is in a class all to herself, and the vigil remained silent to that question

Warren’s words to the people are “If you want to do something do it. I wanna tell women out there that you can be what you want to be. We can do whatever men can do, we are not limited.”

“I loved a woman.

Her name was Pam.

I’ve yelled her name thousands of times in my life.

Now when I yell it, she won’t hear me.”- Boots Riley

Public Enemy’s Chuck D tweeted, “Rest In Beats SIS …damn this is a hurting one.”

Contribute to the family fundraiser for Pam The Funkstress here.