Tracy Wakai, the singer, rhythm guitarist, and songwriter of the indie rock band Sunset Republic, wrote a thousand songs before he ever got one played on the radio. Wakai says, “My dad always told me to quit music and get a real job. I had stacks of notebooks of lyrics that proved I was a workaholic in a career that was making no money.”

Now it appears his hard work is paying off.

Sunset Republic is dropping its debut album in the summer of 2017, just in time for the festival and music season in San Francisco. The album is produced by sound engineer Christopher Haynes, who has worked on songs by The Church, Devo, Blondie, Weezer, Dishwalla, and The Foo Fighters, amongst others. Haynes decided to work with Sunset Republic after he heard their self-recorded tracks one day from musical colleague and the band’s manager, P.J. Hakimi.

The album is a labor of love for Wakai, who wrote and recorded the music with his longtime bassist, recording engineer, co-founder, and good friend, Andy Chapman. The two have been playing together for 10 years. “Chapman is the yin to Wakai’s yang,” says Ollie Palma the band’s keyboardist, “the two are different in both temperament as well as playing style.” While Wakai is the anchor of the band, singing and holding down the rhythm, Chapman is the Swiss Army knife, a versatile, do everything kind of musician who brings to the table whatever a song needs. From eye popping bass lines, to unusually impressive walls of sound, Chapman sets the rhythm and makes the music move.

Wakai and Chapman wrote Sunset Republic’s album in their South of Market studio, across the street from the Hotel Utah. Wakai calls the studio his church. “I like to think of the studio as a self-sanctuary, there is a lot of confessing going on there. Most of these songs are true stories about my life.” In the songs, Wakai bares his soul, 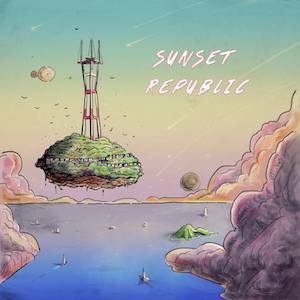 singing about being in and out of love and living in the great, but ever changing city of San Francisco. Wakai explains, “You never get tired of people, that’s all we are in this world is relationships. It’s an endless source of pain and love and I believe that inspires creativity in a lot of artists. If this band can be the soundtrack to your heartache, then I’m not writing only just for me, we’re commiserating. I think that common thread is what binds us all together, and something that we write about.”

The band’s lead guitarist Barney Bannan, comes from a family with a tradition of music. His grandfather, an officer of World War II, was an accomplished piano player who would entertain fellow officers nightly during the war. Bannan plays screaming guitar leads and soaring melodies that push Sunset Republic’s arrangements. His contributions mesh perfectly with Wakai’s rhythms, acting as a counterpoint with his unique melody and style.

Rounding out the band is keyboardist Ollie Palma, a veteran of the pioneering Filipino Goth band Dominion. Palma brings important experience and playing to the band both on and off the stage. Sarah Stewart, who previously worked with Chapman in previous musical projects, sings back-up vocals. Also on backup vocals is Jessica Sheehan, who brings power and style with her singing.

When you listen to Sunset Republic music, it conjures up images in your mind’s eye of bright sunshine, sinking beneath the foggy San Francisco skyline with roiling beaches crushing crystal blue waves. The music has a raw, needy sound, that harkens back to early 90s low-fi and the first rumblings of grunge. But keep listening and you’ll hear elements that are more contemporary, both worldly and world-weary in sound that represents the collective life experiences of the band. Throughout the album, the songwriting is consistently top-notch. We had the privilege of listening to a few tracks from the new upcoming album Rent Control. 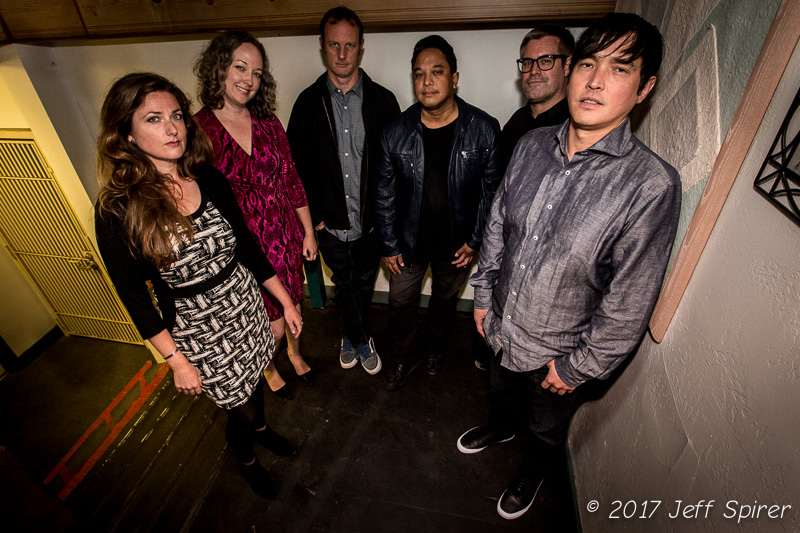 The first song, “Can’t Remember Anything,” begins with a psychedelic collage of echoing guitar and bass sounds. Shimmering guitars and reverberating bass effects give way to beautiful and subtle syncopation from the rhythm section layered over with a beautiful duet of guitar melodies that sounds like Northern lights in the sky late at night. Wakai’s voice is alluring and beguiling, reeling you in until the chorus erupts with indie guitars, exploding like pleasure bombs in your ears. Through it all, Wakai’s vocals soar beautifully above the music as he sings, “So why would you leave to be somewhere without me. I never really heard what you were saying. I never really knew that you were breaking.” Wakai describes the song as being about a past situation that you can’t remember what was going wrong. You wish you can travel back in time to re-live that moment and fix it but you can’t, and now the only thing you have is the memory and regret.

The next song, Radio Wars, starts off with a blistering guitar riff mounting into a frenzy until the drums build up alongside it, then suddenly the band rips into a roaring sonic rhythm. When the chorus hits, the bass and drums frantically belt out a funky rhythm that sounds like Motown musicians on speed; a blistering guitar solo follows that leaves no prisoners. As the song continues, Wakai and Bannan display some deft guitar work in a series of breaks and stops that don’t quit. In the lyrics, Wakai sings, “I don’t think that I can trust anything you say, so I wait alone here, another sad day. Radio wars all the time, I could be yours if you could be mine.”

Wakai explains the meaning of the song – “Growing up, I moved around a lot. There was something I found interesting when we’d travel long distance in the car to somewhere new. The radio station that you were listening to would pick up another radio station until it took it over. That literally is radio wars. At the time I wrote the song I was homeless, I was couch surfing, I was living on Haight Street, and I was going to the store Pipe Dreams every day to hang out with my friend Kyle Gibson who is the drummer in the band the Fresh and Onlys. There was a girl who worked there and all she listened to was death metal and whenever she would come in she would instantly change the music in the store and then they would argue about it. I’m literally explaining what I was watching there.”

The final song, “Paper Tiger Lily,” is like an expression of a childhood lullaby, with a dreamy layer of textured acoustic guitar, classical piano, over a haunting, vexing, beautiful choruses of vocals. The song has a liquid quality to it, as though you are a fish in a bowl swimming around in an environment oblivious to the outside world. Wakai sings, “Wake up into the bright afternoon of walking around and we’ll go find our friend who lives in a glass house. Swimming around with his blue eyes always unblinking and true, like the words we were speaking.” Wakai says the lyrics are about an afternoon he had at the 826 Valencia Pirate Store in San Francisco, (which is an educational center for children). Wakai says, “The front of the store is pirate themed and I used to like to go there with a girlfriend of mine who really enjoyed it. They have a fish tank inside a little theater. You go inside the curtain and sit in a couple of old school movie theater seats and watch the tropical aquarium in the dark. Their mascot is a puffer fish called Carl with blue eyes. That is what the story is about, it’s completely literal.”

For anyone who loves music, and particularly those who remember the late great San Francisco where art and music rode high, I highly recommend checking out Sunset Republic’s upcoming album and live shows.

You might even see Wakai’s dad there, cheering his son on.

You can find Sunset Republic on Spotify, iTunes, and CD Baby.

Listen to a preview of the album Rent Control here.

Visit the Sunset Republic site at http://sunsetrepublic.com for more information on upcoming shows and news.