Gordon “Shorty” Ramos, a singer in the San Francisco based Latino band the Hip Spanic Allstars, says candidly, “I should be dead.”

Driving down the freeway on his Harley four years ago, Ramos got in a horrific motorcycle accident that landed him in the hospital in dire condition.  When the doctors examined him they told him his arm probably wasn’t going to make it.

Miraculously he made a full recovery and regained the use of his arm.  Today, Ramos is living out his musical dream singing for the Hip Spanic Allstars.  He credits the success of his band, as well as his miraculous recovery, to a higher power above, “I have a guardian angel.”

The Hip Spanic Allstars have become an overnight success with a career that most would envy.  Their latest album, Old School Revolution, reached #2 on the Billboard Latin charts.  Their hit song “Party in the Mission” is featured on ESPN when the network cuts away to commercials in San Francisco Warriors’ games. And last year they toured all around the United States.

The success of the band is due to its unique brand of music, a San Francisco Latin sound that is both 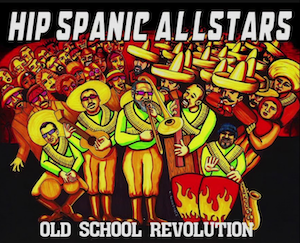 something old and something new.  The Hip Spanic Allstars play traditional Chicano music with a combination of soul, funk, as well as rock, to create a fresh style of music that is new and exciting.  Musically the band can do anything, they are amazing songwriters and incredible musicians, with every instrument having its own time to shine.

The rhythm section is drummer Jay Lane (from Primus, Sausage, and Rat Dog fame) and conga player Karl Perazzo (from Santana, 13 Cats fame), as tight as two coats of paint, they effortlessly create complex polyrhythms with tons of energy.  Perazzo plays the congos to explosive climaxes, his hands blindingly fast.  There is even an improvisational element, where Sanchez will call out a beat and then Perazzo and Lane will pick it up on the fly, or Sanchez will tell them to speed up the tempo mid song and the two will adjust the time easily.

The three singers, singing in Spanish and English, are all different sizes–Victor Castro is a mountainous man, Happy Sanchez Sanchez, the leader of the band, is mid-sized, and Ramos lives up to his nickname, ‘shorty.’ All of the singers harmonize well, their voices blend together perfectly with an infectious energy.

Sanchez recalls how the band started back in his childhood where he met his bandmates in the barrios of San Francisco.  Guitarist Shul introduced Sanchez to drummer Lane and the rest was history.  Lane says he has a special musical connection with the band. “I’ve done a lot of gigs man, I’ve played with a lot of people, but when I was first learning to play in the Catskills, the people I first looked at as a kid were these guys.  So for me, this is like going back to the school yard.  Going back to this music, it’s like everything you ever wanted to do if no one ever told you what you had to play.  You can just hear it and do whatever you want.  It’s that familiar sound we remember growing up, that was the make-up of the neighborhood at the time, it was really diverse.”

In 1998, Sanchez, Shul, Ramos. Stachel, and Castro formed the alternative Latin band Los Mocosos, blending rap, rock, funk, and salsa to make a unique sound.  The band quickly started gaining recognition playing high profile shows.  Castro fondly recalls one memorable gig where they played the Montreal Jazz Festival in 2002, “We were playing and there were 40,000 to 50,000 people standing there watching us play in the rain with umbrellas.  It was so incredible to bring all those people joy.” The band recorded three albums on Sanchez’s record label Aztian Records that were well received. 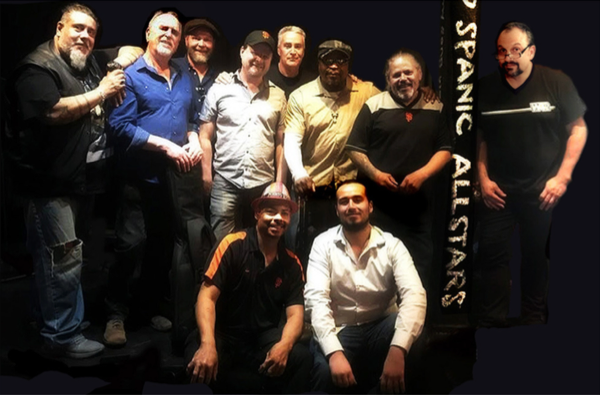 In 2003, Sanchez formed the Latin Soul Syndicate, creating music that combined upbeat Latin soul, electronica, pop, and rock.  He recruited Perazzo and many of the musicians today in the Hip Spanic Allstars.  The musical connection was instantaneous the moment Sanchez and Perazzo played together.  Perazzo remarks, “For Happy and I, we are so zoned in, and so in tune.  We do an album and you just let us go.  We can do a whole album in three days.  Most guys play what they hear.  We play what we know and what we feel.” The band had a lot of success with 150 movie and TV placements, for shows like The Sopranos, Dexter, The Devil Wears Prada, and The Ugly Truth.

In 2015, the Hip Spanic Allstars formed, exploding onto the music scene.  The band released its first album called Jazzy Afro Latin Funk, taking what the group did before in other bands and evolving it to a whole new level of incredible musicianship.

On the heels of the album’s success, the band released a second album in 2018 called Old School Revolution.  SF Sonic had the privilege of listening to some of the songs off the latest album.

“Party in the Mission” is a song crackling with energy that grabs a hold of you with the opening addictive bouncy, hooky horn riff, propelled by a phat funky drum beat.  Funk guitar and congas propel the song forward and horns zoom past your ears like sonic race cars.

Abruptly, the music halts, then the song roars back to life with the full force of the band behind some beautiful three-part harmony vocals.    The lyrics of the song celebrate the unique sound of SF Mission district music.  The goal of the band is to share that unique cultural experience with people through their music.  Perazzo explains, “This music has always been around.  There is something to say about the combination of Chicano music and soul music.  It’s one and the same. Once you put African Cuban grooves in it, then it becomes something else, a hybrid.  We are creating a familiar energy, it’s everything you’ve ever experienced in the best times of your life.”

The song “In My 64” throws down a slinky groove over an echoing keyboard, Guiros, grooving congas, and four on the floor drums.  Castro sings the lead vocal, his voice a beautiful deep timbre that gives you chills.  Ramos and Sanchez back him up, each of them singing the same melody in the round at a different time until all of their voices suddenly catch up, meshing together in an enticing harmony.  The horns rise like California sunshine, high above the music punctuated by a blazing guitar solo at the climax of the song.  The lyrics capture the wonderful feeling of cruising in a classic hot rod car on a beautiful Sunday morning, feeling the wind blow through your hair, with the top down, cruising down the highway.

The track “The Funky Cha Cha” is an energetic dance track that embodies the style and musicianship of the band’s talented ensemble.  The horns chirp in a sexy hypnotic rhythm, the tickling ivories on the keyboards create a beguiling cha cha melody.  The rhythm section plays a pulsing, seductive groove with a Guiro, congas and some fierce drum playing.  The vocals feature Ramos on lead, singing lyrics about serenading a beautiful woman to join him on the dance floor.

For music aficionados looking for music that is fresh, fun, and exciting, I highly recommend that you check out The Hip Spanic Allstars.

To listen to the song Party in the Mission click here.

To listen to the song In My 64 click here.

To listen to the song The Funky Cha Cha click here.