AYBEE, Chief Alchemist of Deepblak Recordings, comes with an audible reminder of how EVERYDAY is PRINCE DAY.

A Purple Tear was released on AYBEE’s SoundCloud page right around the time of Prince’s b-day this year.

Releasing music under a range of monikers (Orion 70, o1o, Prof Delacroix), Producer/DJ/Filmmaker AYBEE aka Armon Bazile has garnered respect from all corners of the electronic music spectrum. With a versatility that is genre defiant, AYBEE traverses techno, house, experimental, and hip-hop seamlessly. Pushing a distinct sound that is in constant evolution while resolutely rooted in dance impulses.

A product of Oakland, CA, AYBEE, now resides in Berlin.

Benjamin Caschera is the label head at Almost Musique and co-founder of La Souterraine.

A loose music collective founded in 2013 focused on Franco pop underground music, built on name-your-price mixtapes and compilations. Caschera calls the “FRANCE” release “hurdy gurdy” drone folk music. Which it just might be. There is also a strong psych, atonal, noise element that keeps chugging along.

Benjamin Caschera gives a description, via e-mail, of this hypnotic band:

“The band FRANCE consists of  Yann Gourdon, Jérémie Sauvage and Mathieu Tilly. They met at an art school in Valence, France and their first shows were somewhere under bridges or in forests. They played with their own generator to be as free as possible. The band has existed for a decade and is exclusively a live act performance – they never record in studio although they have a bunch of live recorded releases. Their live acts are an intense listening experience, strong and loud, with a physical and mental emphasis. A lot of people tend to say their music induces listeners into an invited trance like state. But the band prefers to refer to it as a form of drunkenness or psychedelic intoxication.”

Suzi Analouge is an electronic music producer, DJ, and MC. She co-founded the Los Angeles collective Klipmode in the late 2000s.  The collective has helped launch the solo careers of MNDSGN, Knxwledge, Devonwho, and, of course, Analogue herself. Over the course of her solo career, Analogue has worked with Quelle Chris, DJ Earl, Georgia Anne Muldrow, and TOKiMONSTA, to name a few. Her current release Zonez Vol 3, on the self-produced Never Normal Records imprint, is a wide and varied display of  Analouge’s acuity. “Numba” is loaded with those Two-step Garage vibes, fer days.

Aaron Koslow aka Elusive just released a stealthy single that punches up his jazz-fusion production resume. Futurebeats ideas and bass music sensibilities all play their part. Koslow’s full-length Fusion Swing, released earlier this year on Alpha Pup Records, captured the many pathways that experimental hip-hop/electronic music and avant-garde/free jazz from the early 1970’s link up and merge in a very organic fashion.

Daptone Records released Move Upstairs this May. The raw and soulful new album from lifelong gospel singers, Ester Mae Wilbourn, Angelia Taylor, and Della Daniels. Listeners seeking the good word will not be disappointed. But for those outside the church, it’s the delivery of the trio and the serious musicianship that will keep all types of music devotees coming back for this dose of humility.

In what is being sleuthed out in real-time via persnickety smart music publications, Private Life, by the mysterious “Garrett” on the Amsterdam based label Music From Memory, is actually a previously unreleased DāM-FunK album. Need proof? Listen to the elongated keyboard melody riding over that slow rolling wave of steady bravado on “Slow Motion.” Case closed. Nice one from Damon Garrett Riddick. You can catch DāM-FunK in SF along with San Francisco’s Sweater Funk Crew at 1015 Folsom on July 21st.

Susan Langan aka Qzen started DJing drum & bass over a decade ago at the legendary SF D&B party Eklektic. Over the years she has opened up to play house and an assortment of electronic music. She did a five-year turn as the dance and electronic music programmer for iTunes.

Since 2010, she’s produced music with Dave Aju on Circus Company, Guillaume & the Coutu-Dumonts on Oslo, Mossa on Thema, Sacha Robotti on Klasse Recordings, Never Knows on Untitled & After, and Berkson & What on Modelmaker. She remixed their “Energy Systems,” as well as Canson’s “Don’t Stop” for Thoughtless, according to her website.

This Bushwick A/V Cast, recorded live on March 25 of this year, captures the essence of what Qzen has been able to sustain over a far-reaching career. Taking the joyful bounce of bass music and then flipping it into a serious dissertation on space and sound. 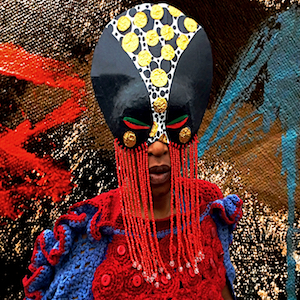 “Lyrically creative the songs are like individual declarations. Proclamations of a soul searcher’s realizations. The processed renderings of inward outward observations. Five introspective songs to be experienced on the dance floor and in your headphones”, reads a press release.

Standout track “The Presence” carries the ancestral weight of a blunted sledgehammer in the sound design, with SassaCyprigo vocally bobbing and weaving in song and story. Walking and talking with the history.

SassaCyprigo! is the blues, digitized.

Com Truise – aka Seth Haley – has chosen to write in the key of turquoise sunsets, glitchy bleeps, and wide bass lines for the 12-track offering Iteration. It was released on Ghostly International earlier this month. As highlighted in press materials, the album is built on Com Truise hallmarks: neon-streaked melodies, big drums, robotic grooves, bleary nostalgia.

It radiates with the notion that, let’s say, Blade Runner decided to insert robotic dance sequences.  At times, 12 songs with this idea in mind becomes just a little too programmed. But when operating at full 1980’s sci-fi power, Truise turns in some of his best work in six years.

Brooklyn-born singer-songwriter and multi-instrumentalist Gabriel Garzón-Montano filmed the video for “Bombo Fabrika” in San Basilio de Palenque, Colombia. His widely acclaimed début LP Jardin, released in January of this year, is hitting all the “Best of 2017” lists already.

A born and raised child of immigrant parents, Gabriel’s aesthetic is an extension of his French-Colombian heritage. His influence is a pastiche of Bach sonatas, cumbia records, and the machine gun funk that echoes up and down Nostrand Ave. His mother, a member of the Philip Glass ensemble in the 1990s, instilled within him a painstaking attention to detail that remains a hallmark of his process. Jardín comes on the heels of three intense years of touring, writing, and recording. Gabriel was invited out on the road by rock legend Lenny Kravitz to support concerts across Europe. The day after playing Wembley Arena, he received a call notifying him that an early song of his,“6 8,” would be sampled by Drake on his full-length “If You’re Reading This, It’s Too Late.” The months following these cosigns, Garzón-Montano was featured on back-to-back tours with English indie-rockers Glass Animals and Stones Throw label mate Mayer Hawthorne.