After a week of radio spots and studio sessions in Paris, the group Les Graciés, consisting of Gaël Segalen and Eric Douglas Porter aka Afrikan Sciences, joined forces at a prominent experimental music venue in London for a one-night-only live performance this past July. Les Graciés Live at Cafe OTO, released last month, showcases a much more ambient version of the thunder and fog attack on frequencies and vibrations by the two.

Equipped with peaks and valleys augmented by menacing wood block claps ratcheting up the intense swirling phonics at the first phase of the performance, this ambient exploration delves into a cinematic thriller territory. Yet, later on, these paranoid type triggers give way to delayed ping-pong noises that evolve into a dub-type beat pattern. 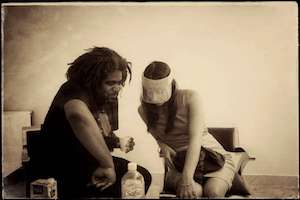 Collectively self-described as the “French-American tandem of a brother & a sister in sound,” the two presented their 77-minute performance curated from both of their own handcrafted sound libraries, at what former Sonic Youth Guitarist Thurston Moore calls “the most critical listening room in London.”

Afrikan Sciences: “Performing at Cafe OTO with Gaël as Les Graciés was a great accomplishment after having missed the opportunity several times prior for one reason or the other. Having reunited the week before the gig for rehearsal was in fact key since we hadn’t seen each other or performed together in a year and a half. To no surprise, we picked up right where we left off and were able to capture all the elements that make our pairing so interesting, dynamic, and contrasting. Interesting side note. I opened for us with a solo performance under my government name. A first.”

Gaël Segalen: “Eric arrived and we – Les Graciés – spent six days to celebrate our reunion after a year and a half of not seeing each other. We set up at my place in Paris where getting our gear in order took priority. We didn’t go out except to do a Rinse FM Radio Show with DJ Myako, a girlfriend of mine who produces, and then walked in the city to go back home and continue to jam.”

“So we were recording maybe two jams a day, to lay the basis of our coming live gig at Oto, hoping to find a possible structure, split our tasks, and find our place. And also, the idea was to produce our next album. Which isn’t difficult, considering the way we navigate with so much fluidity. On the night we arrived at Cafe Oto for the gig, it was very warm. HOT, in fact. In true Cafe Oto tradition, they cut the fans as soon the performance started. Eric opened with a solo performance, and by the time Les Graciés performed everyone – performers and attendees – were sweating! But we left the night feeling very happy with a great recording of our performance. Thanks in part to Shaun Cook, the sound technician and engineer on duty that night. His understanding of our set up, four channels on a semi-circle, was a major contribution to this successful recording.”

Leaving the doors of perception wide open for the wind to blow them off the hinges, Serenitay Infinitay is 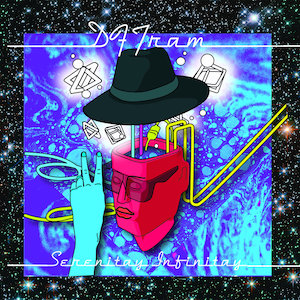 what producer and Veteran Bay Area DJ DF TRAM states it is: An ode to easy listening, spoken word, ambient, deep crate digging, and psychedelia. Equipped with eleven tracks and remixes by The Orb and The Irresistible Force, this is required listening for that lazy Saturday afternoon when the rain is pounding down and you decide to stay indoors for a traveling without moving session. This release possesses all the needed amounts of inner mind’s eye cultivation lining up seamlessly next to dusty normcore vocal samples from records found on your neighbour’s lawn. DF Tram, a staple for years at the Chillits annual ambient music festival in Willits, CA, wrote and recorded Serenitay Infinitay in his SF studio and then finished it at the Liquid Sound Design studio in London. 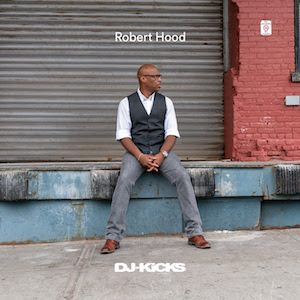 Detroit’s pioneering techno giant Robert Hood is next to take the reins of the DJ-Kicks mix series. His timeless 22-track offering includes four of his own new exclusives and will come on CD as well as with a 2 x 12” vinyl sampler on Nov 16th.

Hood, a Motor City mainstay, was a founding member of the pivotal Underground Resistance with Mad Mike Banks and Jeff Mills, and then went on to lay down the functional layout for minimal techno as we know it today. His 2017 Paradygm Shift release cemented that after 25 years he is still the standard in electronic music. 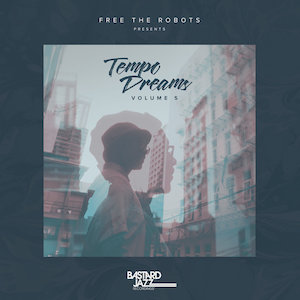 Mophono shared with us the six-year journey and idea behind “Bernardwuar”.

“As a Bay Area experimental DJ, I have always been into record digging and sampling throughout the 90’s and on till now.  Working incessantly for years, I had developed an extremely extensive sample library. Around 2010 something different started happening. I wasn’t able to find sounds that I thought were out there. I was finding these amazing records that were insanely collectable and esoteric as fuck, but these songs that I imagined were not appearing. I would find recorded library records, punk, synth and jazz records with elements that I could spell out what I was hearing in my head. But at some point, I had to be honest with myself.  I could either spend hundreds and hundreds of dollars on short moments with peripheral sensations. But no direct experiences that I thought were out there. Or I could sit in my humble little Lower Haight studio and try to create them myself.”

“Around 2012 I made a session called “Bernardwuar.” I sampled an extra crispy and loud 7” of Bernard Purdie playing the drums with Mongo Santamaria covering “Cold Sweat” by James Brown. Phenomenal drums for those that know the break. I chopped them to hell and created a full force double time to halftime chop fest. Cymbals, kicks and snares were all over the place. Every sound cut off by the next one. It had a very obnoxiously loud hardcore element to it. But it was sampled and so obviously Bernard Purdie. This was the idea. Taking something so undeniable and so respected by the drum break community and using this major foundation to set up a different tempo.  61.5 BPM was extremely slow among my peers. Especially during the 2012 time period. 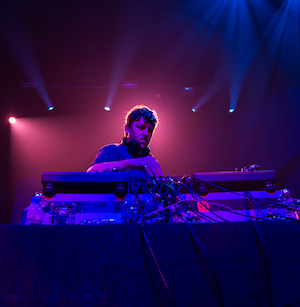 This is why I needed this level of foundation. How was I going to share 60s surf punk sounds to a dance floor drenched in dubstep and club rap? Without using a drum machine? Bad idea.”

“Long story short.  ‘Bernardwuar’ started out as a new genre. Untapped and unexplored. I realized I was looking pretty deep into this new sound while stacking a huge burden on top of its wild/non-stagnant patterns and absolutely non-club-oriented instrumentation. After about four years of stubborn experimentation on many dance floors and at numerous psyche parties, I committed to the vision. Abandoned the source material, only for selfish reasons and asked my friend Pat Korte to join me on this gnarly vision of punk, psyche, surf, savagery. Help me take it back from a fantasy world that relies on a non-existent audience, and take into the real world. The studio. The musique concrète studio. Circuit Studios in Lower Haight. A living space where it can be recorded and captured on tape. Manipulated. Delayed and smashed into something where people really hear the composition and textures and stylings not for what they intended to be, but hear them for what they are.”

Tempo Dreams, Vol. 5 will be released on November 9 via Bastard Jazz.

Coming in strong with exclusive tracks from some of 2018’s top electronic music producers and artists, Moxie Presents Volume 4 continues the tradition of providing another avenue to promote a gender-balanced mix of artists who Moxie herself heavily supports. With exclusive tracks from Steve Spacek, Byron The Aquarius, Nathan Micay, Violet, Louise Chen, DJ Python, Lady Blacktronika and The Maghreban in tow, this edition deserves added attention. 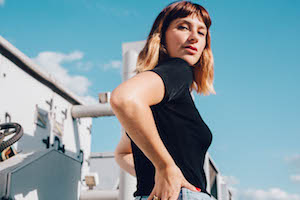 While there is not one bad apple in the bunch, it must be noted Byron The Aquarius hits some serious production intensity with “Truth is What U See.” Steve Spacek turns in a slippery mover of a soul jam with “Gimmi Da Love,” and The Maghreban comes with the big step flip of the same track, making it a dance floor sweat and go moment. Violet, the founder of Lisbon’s first techno queer feminist sex-positive party constructs a killer breakbeat stepper with “Antifa Beats,” while DJ Python laces the chill introspective “Quito” that serves as the continual earworm here. Bravo to DJ Moxie for creating a front to back party, equipped with talent who is RIGHT NOW shaping the soundtrack of tomorrow.

Moxie Presents Volume Four will be released on 10/26 via On Loop Digital and Vinyl. 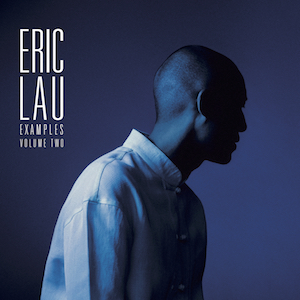 London producer, musician, engineer and DJ, Eric Lau provides a 28-track beat audioverse that covers hip-hop, jazz, funk, soul & Brazilian sound sources with his top-notch release Examples Volume Two. Most of the selections here clock in at two minutes per song, so there is a J-Dilla Donuts idea happening with the length. But Lau’s expertise is his flexibility. From glistening r&b to gritty golden age boom bap with a plethora of unexpected talking samples scattered about, it is a must-have. Right down to the last track which features June Tyson from Sun Ra Arkestra yodelling “Our Future” into the abyss. Examples Volume Two is slated to be released on November 2 via First Word Records. 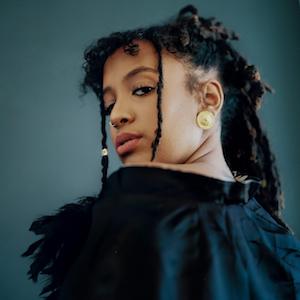 ‘Free Again’ is an ode to imagination, growing up and harnessing the childlike energy we all carry with us. It felt like an imaginary friend shaking up adult me, reminding me what freedom feels like. Or to at least reinvent what it means to me now. This friend also helped me realize how easy it is to fall into the other (mostly self)imposed trap of what and who I’m supposed to be. It sounds complicated but the best advice is usually quite simple: ‘oh friend, come be free again.’-Arima Ederra

You can never be sure about Louis Cole and it seems he likes it like that. Is he a satirist or a savant. While the Los Angeles based singer-songwriter, producer and multi-instrumentalist, flaunts a sense of humor that at times pushes garish lewd innuendoes, his “all in” approach to making art punk explorations into various 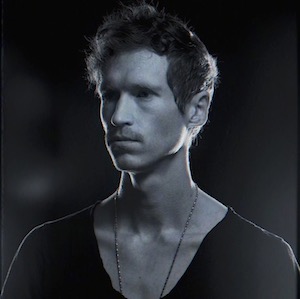 genres seem to always end with dead-on execution. Cole, along with Brandon Coleman and Dorian Concept are all a part of the supporting players in the Flying Lotus, Kamasi Washington, and Thundercat audioverse who this year are finally getting their just due in delivering solo records. The upside with that opportunity is that when you are recording for Brainfeeder, there is no urge to conform to pop standards.

So especially for Cole, weird wins.

If you enjoy the dedicated musicianship and overall bizarre joy on display, it would behoove you to seek out Cole’s latest Brainfeeder release, “Time”.

“F It Up” is not on the record. Cause that’s what he does.

Photo of Mophono by Patrick Murray.