Christy Chemical, lyricist and lead singer of the hard hitting rock, metal band, Chemical Gunns, admits she’d probably be insane by now if she didn’t have music to be her cathartic outlet. “I see the direction that our planet is going and I feel like society is really taking a turn for the worst. Global warming is real. Our oceans are dying. The bumblebee just went on the endangered list. I feel like we are going into a really dark place. Music, for me, is the ability to spread the message because I could rant on Facebook all I want, but people don’t hear it anymore. So, if I can put that into my lyrics, I feel like I’m doing my part.”

Gabriel Gunns, the band’s lead guitarist as well as principal songwriter, is hardly a stranger to controversy. Growing up in Missouri as a child, he was raised in a religious cult called 12 Tribes beginning at the tender early age of four years old. Isolated and feeling cut off from the rest of the world, he began to see a lot of things that disturbed him. Gunns says, “12 Tribes would try to bring people back to the cult to see what things were like there and then try to isolate them. They would use certain forms of mind control. Our evangelism was we would sometimes go out and hand out literature the cultists made.”

Since he was not permitted to do much else in the cult, Gunns began teaching himself to play guitar at a very early age, “They played Gospel music and spiritual music, it wasn’t about rocking out. You picked up your instrument to worship God. That was how I learned to play guitar, it was just simple three-chord stuff. I played only on an acoustic guitar. We weren’t allowed to play electric instruments.”

Once Gunns turned 19, he escaped from the cult and moved to Northern California to strike it out on his own. In Marin County, Gunns teamed up with producer James Steele and formed the band Zenith. A short while later, Chemical joined the band and the chemistry between her and Gunns was magical. After quickly recording a string of amazing demos, the two had creative differences with Steele and eventually everyone parted ways.

In 2013, Gunns reached out to Dave Jurgens, a drummer in the band Dominion, and the two began writing material that later would become the primary foundation for the first couple songs of Chemical Gunns.

At the same time, Chemical joined a metal band in Los Angeles, commuting hundreds of miles to drive for rehearsals every month, but after a short period of time, she felt that the band wasn’t a good fit for her, “I was down in LA for like a few months. It just didn’t work out with the other band, I felt like more of a puppet. We took photos and they were like, ‘You can’t smile, it’s not metal!’ But I was really excited! They would always try to control me and I didn’t like it. I was chasing fame rather than establishing relationships.” 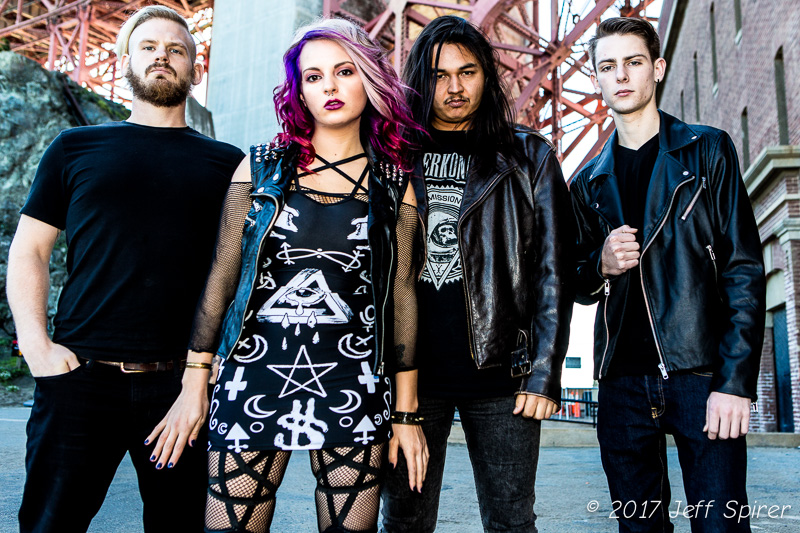 Eventually Gunns reached out to Chemical about singing in his new project and she said she was available. Once the two got in a room together again the old chemistry immediately came rushing back, and from that point on, the band was off and running. Relocating the band from South San Francisco to Mill Valley, the band amicably parted ways with Jurgens, who couldn’t practice in the new location, and they began a search for a new rhythm section.

After going through a couple of drummers, they discovered drummer Jon Groh. When he walked in the door, Groh instantly clicked with the band and began pushing the music to a whole new level. Groh describes his musical approach as constantly evolving. “I don’t like repeating what I do from song to song and I try to make an effort to not do that. Everyone in the band strives to really push what we can do, and we try to learn something new from each song.”

The last piece of the puzzle finally fell into place once bass player John Cullen joined the band. Cullen has a refreshingly unconventional approach to playing bass that turned out to be exactly what the band needed. Cullen remembers joining the band, “The first couple of rehearsals I was playing a regular, four string bass and that was a no. I told Gunns, ‘It’s not enough bass. It’s not enough bass!’ I added a low B string to the bass and now every song is lower and more heavy, more thick in bass. What I add to this band is that punchy, super heavy thick bass sound.”

If you watch the band play live, one of the first things that immediately jumps out at you is how effortlessly they weave and blend metal and hard rock together, switching back and forth so well you sometimes can’t even tell the difference. It’s like a major-league pitcher who sends a burning 100-mile curve ball over the plate that looks straight, but to your surprise, it instead curves into the dirt at the last minute. The band’s complex arrangements are impressive and tight, however somehow, someway, they seem to all be on separate planes of existence.

This is no conventional band.

Chemical Gunns creates music that is performed at the highest level, with top-shelf song writing and great production. I had the privilege of previewing a few songs from their
upcoming EP due for release on April 2017.

gate, with wickedly killer guitar riffing that feels like it will tear your head off. Accompanying the guitar playing is excellent drumming, very groovy bass, and vocals that raise the hackles on the back of your neck. In the picture to the song, a little girl is in a post- apocalyptic oppressive city that looks like its straight out of the Matrix. The little girl wears a gas mask while watering a tiny flower amongst barbed wire and poisonous green gas. Chemical sings, “When you’re down on a rope, with a prayer in your throat, and god knows where you’ve been. Tell em in the garden, the Garden of Sin!” What seems like a religious song about a person in hell is actually a prophetic vision of what our world will look like if something isn’t done to fix the planet.

The song “Rage” has impressive guitar work, sounding like a locomotive hurtling through your speakers, alongside solid double bass drumming and syncopated arrangements that make you want to throw out a rock-on sign and bob your head. Chemical says, “The song is about living your life the way you want to live it and to not let anyone get you down or tell you that you’re wrong. A lot of my lyrical themes are very occultist. It goes back to the thirteen families that rule the earth–the Illuminati. At the end of the song, the person finds redemption and peace.”

The final song “ICEolation,” is an epic guitar power ballad that is beautiful, haunting and melodic, as Chemical paints a dire picture about global warming and what will happen if the ice caps continue to melt. Some have said global warming is a hoax and waste of time, a claim which Chemical responds dismissively, “That’s Donald Trump and that’s bullshit!” Gunns explains, “Chem trails are pretty much a bunch of metal and poison that they spray up in the air that is actually eating up the ozone layer. The more they spray the stuff in the air, the more they have to continue to spray because the ozone layer is gone and what they do replaces it. It’s going to get to the point where there is hardly any ozone layer left and we’re burning up and ice caps are melting and shit and they’re going to be trying to spray just to frantically cool the planet.”

For people who don’t care about such issues, Chemical says, “It’s not a big deal, just go back to your Kim Kardashian TV program. I feel like I’m trapped in this world where I know what is going on, or I feel I know what’s going on, but people don’t really get it, they don’t really care. As long as they have their life, their luxury, they’re fine. That makes me go insane because I don’t know what else to do so the band is my outlet for just releasing that.”

This band is made up of millennials that want to make a difference. Other generations before them have kicked the can down the road, preferring for other people to solve their problems for them instead. Every time Chemical Gunns performs they give Big Brother the big middle finger.

Now it’s time to spread the word and make a difference.

For more information on the band visit their Facebook page.