Last year, The Jesus Lizard toured together for the first time in 8 years. The six-show run brought the noise rock legends to a sold-out show at the Independent in San Francisco, which was considered by many to be one of the best rock shows in the City By the Bay in 2017.

Things must have gone so well that the legendary band decided to go out for another short run of eight shows recently that concluded in Seattle and Portland. SF Sonic was there to cover both of those shows. The legendary band, who are now all in their mid to late 50’s, were nothing short of incredible on both dates. Here is a short of summary of both shows and the host cities. 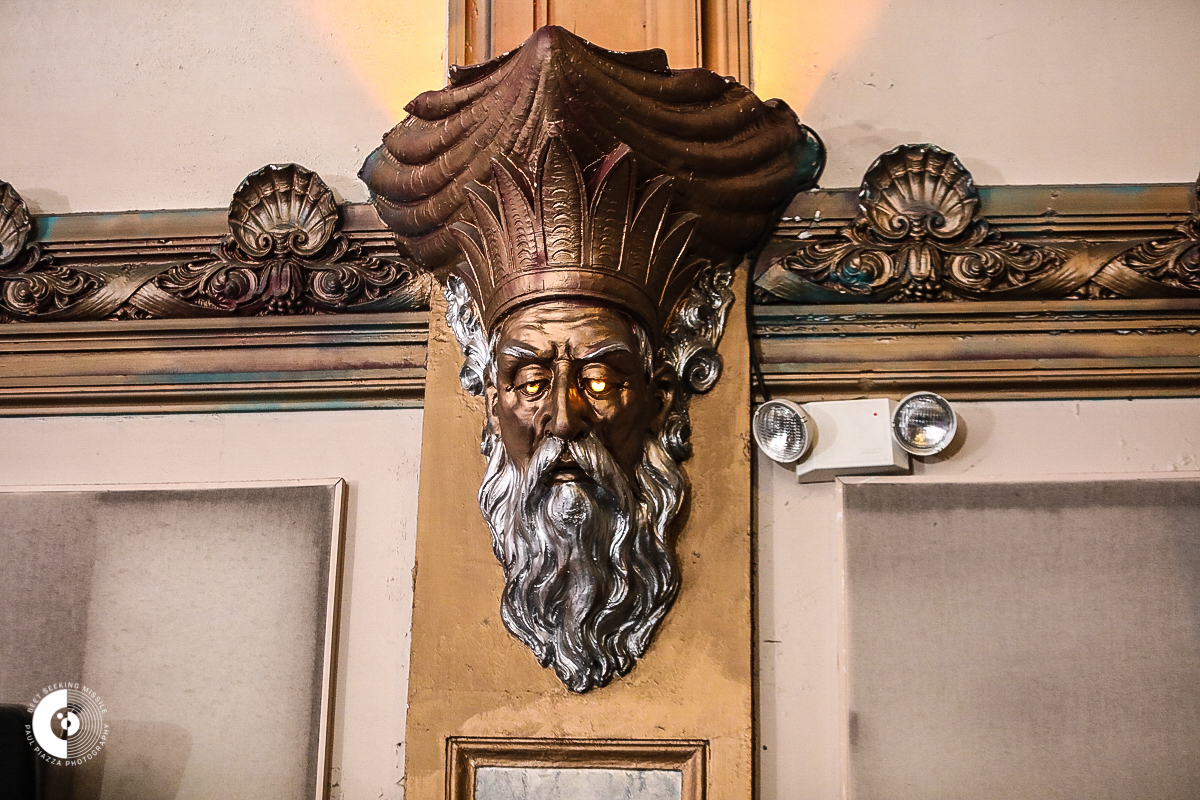 With some time to kill before the show we had stopped in and spoken to the owner of a Paganism and Occult Shop, which was next door to the Neptune Theatre. He explained how he had recently been priced out of the Capitol Hill neighborhood, formerly a bohemian enclave, where he had lived and done business for years. This was due to the influx of new money and rent increases that have rearranged the geographic pecking order in the city. Now, he’s next door to the Neptune Theater on Northeast 45th Ave. It’s a street that, he explained, after the lights go off, becomes one of the most crowded homeless sleeping areas in the city. This conversation was a reminder that rent increases and homelessness are a serious problem in all of our big cities, even one as seemingly organized as Seattle, as they struggle to keep their cultural identities.

Earlier, we had gone to the Mo Pop (Museum of Pop Culture), formerly the Experience Music Project, and had seen some very interesting music exhibits. There was a scaled-down version of the original Jimi Hendrix exhibition, which had hand-scrawled lyrics and notes, a guitar he’d played at Woodstock, and a recording console from Electric Ladyland Studios. Fascinating stuff. 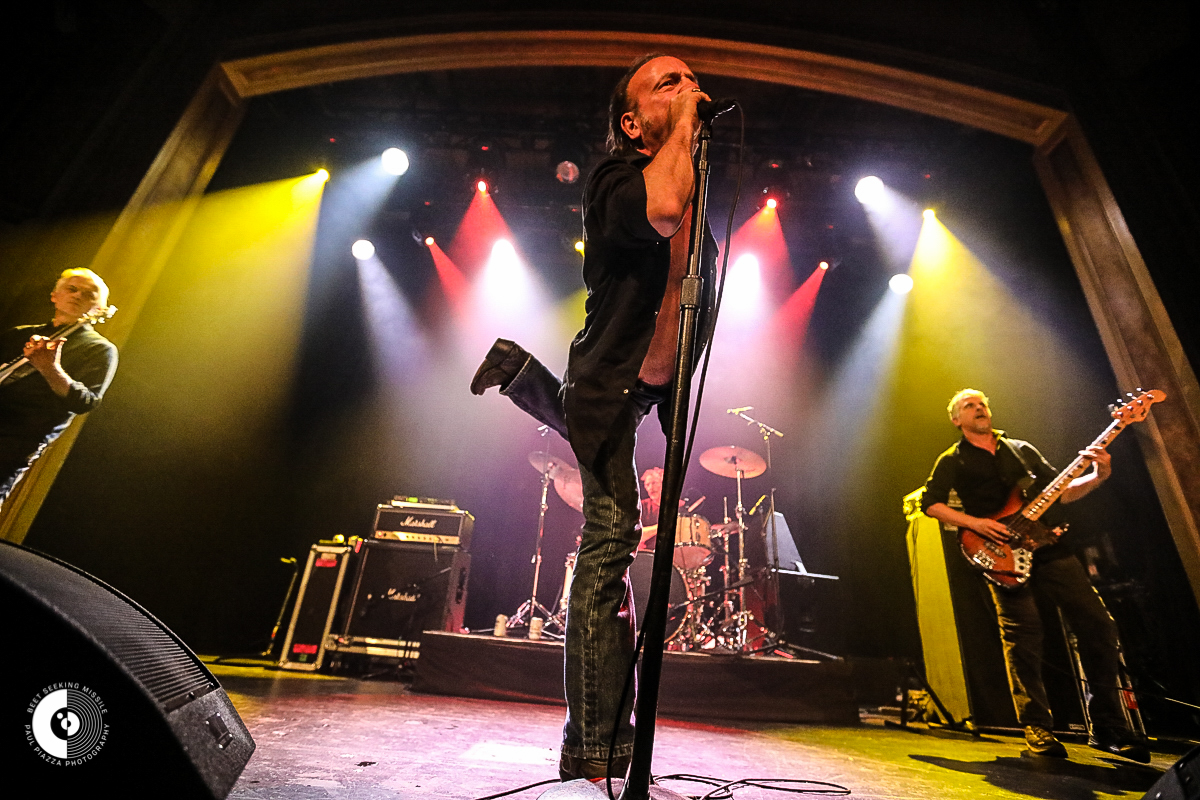 There was also a huge Pearl Jam exhibit called Home and Away and a smaller Nirvana exhibit called Taking Punk to the Masses. The Pearl Jam exhibit was a bold, bright, artful reminder about how big they are all over the planet. The Nirvana exhibit, however, was smaller, darker, and had some compelling primary sources. One of the most interesting, was an early letter from Buzz Osbourne of the Melvins to Krist Novsoselic, in which Osbourne playfully chided the bassist for not staying in touch. Osbourne wrapped up the note by casually mentioning that after listening to a Cobain demo, “he could have some kind of future in music if he keeps at it.”

I was first exposed to The Jesus Lizard when I heard the shared split single with Nirvana, “Puss/Oh the Guilt.” That led me to The Jesus Lizard’s incredible Liar album, which eventually led me to everything else. As someone who was grieving the seeming hibernation of metal in the early 90s and not really embracing the avamt grunge and its many sycophant spin-offs, this heavy, artful, compelling, guitar driven, deranged music with a dark sense of humor was the cure for me. 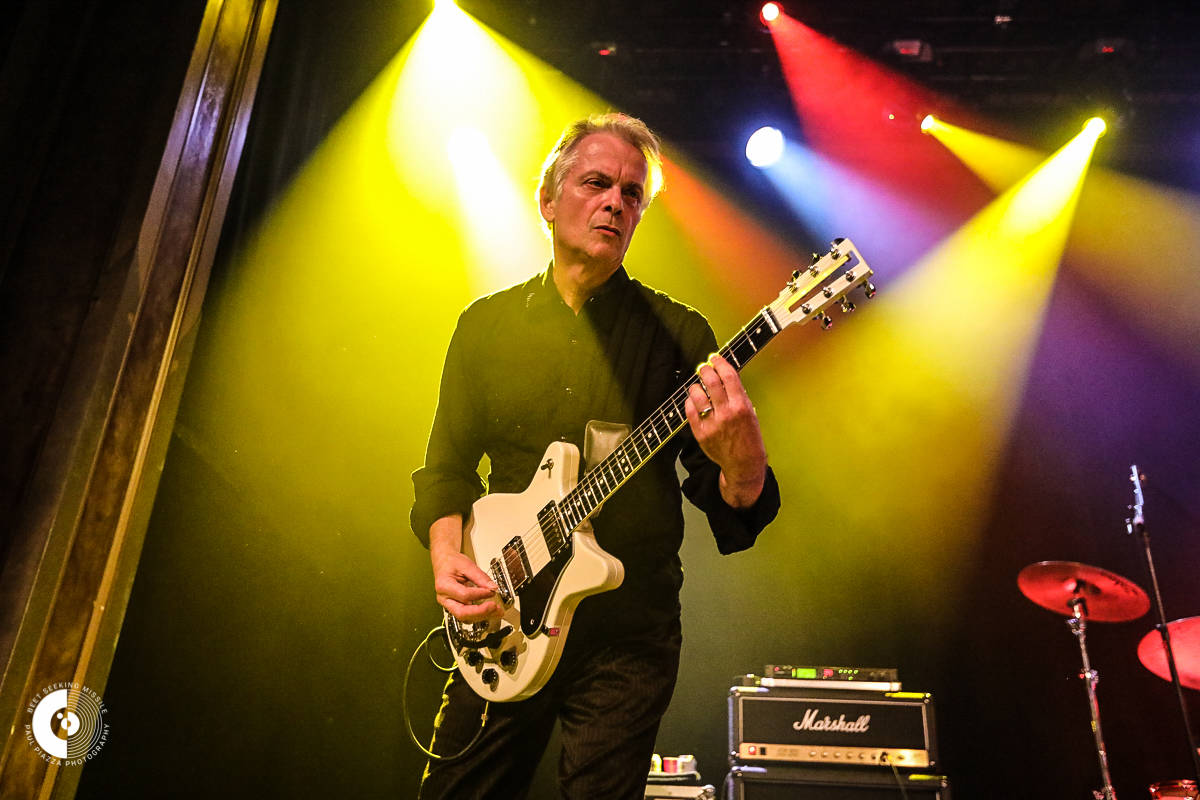 Now, everyone knows what happened with Nirvana, but the four members (David Yow-vocals, Duane Denison-guitars, David W.m. Sims-bass, Mac McNeilly-drums) of The Jesus Lizard have all gone different paths with their lives since disbanding in 1999. McNeilly left the constantly touring group in 1996 to focus on his young family. The band got another drummer but were never quite the same before disbanding in 99. Yow has done some acting, art, and a solo album, Sims is an accountant who does music on the side, Denison has played with a wide variety of groups and McNeilly has been making a living near Chicago while still playing music on the side.

After getting back at it and doing some touring in 2009 with their original line-up, the group took an eight-year break and came back last year. Thus, we’d be getting the third go-round in the new millennium. And the third time was definitely a reason to raise a beer and go all in.

The beautiful Neptune Theater has an old-time feel, and, on this night, a sold-out crowd of 1000 happily waiting for the arrival of The Jesus Lizard. When the band walked onstage, singer Yow popped open a Rainier beer and set it down on the drum riser as the band started off with “Puss.” After a couple of swigs and pause for to breath, Yow ran forward and took a flying leap into the crowd and set things off. He sang the song in the crowd while surfing over the audience. The band sounded sharp and plowed through a set that many will remember for a long time to come.

All the players were at the top of their game: Denison adding amazing layers of dark textures on his guitar, Sims commanding the stage with pulsating bass lines and Mac McNeiley attacking the drums with insane ferocity and agility. After fifteen songs, the band took a brief exit from the stage.

When they returned to start the second half of the show, which was broken up into three lengthy encores, more classics were played, Yow repeatedly dove into the audience as the band churned on. However, things went so well that the band came out and played yet another three more songs that weren’t on the planned setlist because everything felt right at the room in Seattle. At one point Yow said, “We are the only band left with balls,” and it was hard to disagree with him. Later, Yow seemed so pleased with everything that he dropped to the ground later and gave us twenty pushups.

“Louie Louie” by the Kingsmen was written in Portland. The song was the subject of FBI scrutiny after allegations that it contained obscenities. Although nothing ever came of it, band members revealed much later that during the recording, the drummer had shouted “Fuck!” after dropping a stick at the :54 second mark. 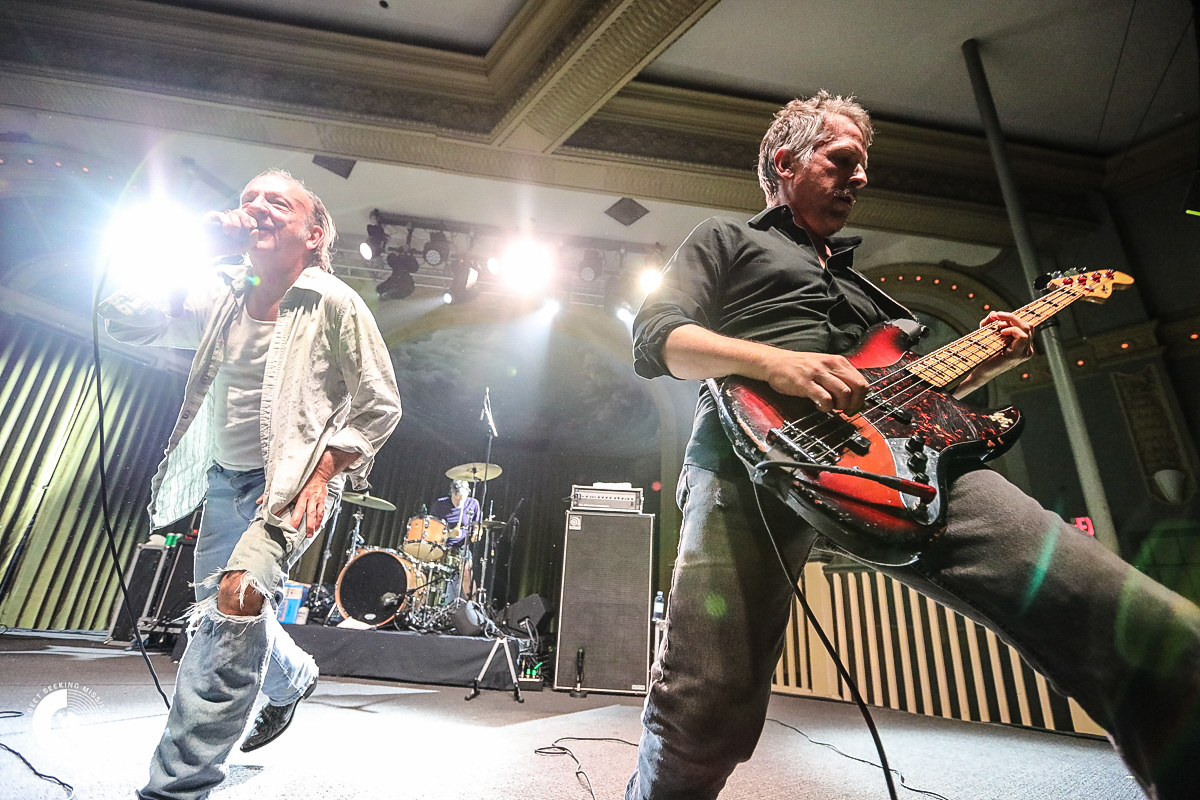 The Jesus Lizard in Portland

Thus, Portland has a history of its own as a Northwest breeding ground for both music and culture. The city faces the same problems as Seattle, with homeless camped out all over the streets, the cost of living going up, and trying to retain its character. However, a bigger problem on this fall Saturday afternoon seemed to be the reckless careening of young people on electric rent-a-scooters as pedestrians tried to enjoy the peaceful Willamette River walk. Apparently, it’s a very popular sport in Portland these days.

The Jesus Lizard were set to play McMinimins Crystal Ballroom that night. Another sold-out show. Another killer set with multiple encores. Another chance to hear great songs like “Monkey Trick,” “Too Bad About the Fire,” and “Seasick.” It was the band’s last night of the short tour and they were again firing on all cylinders. The place was packed and the crowd was engaged. But when the band left the stage to wrap the first half of their set, dozens of people (mostly the younger patrons) hastily exited the venue as if they had somewhere to be. It’s hard to tell if that was intentional, or if kids are just conditioned to really short sets of music these days. 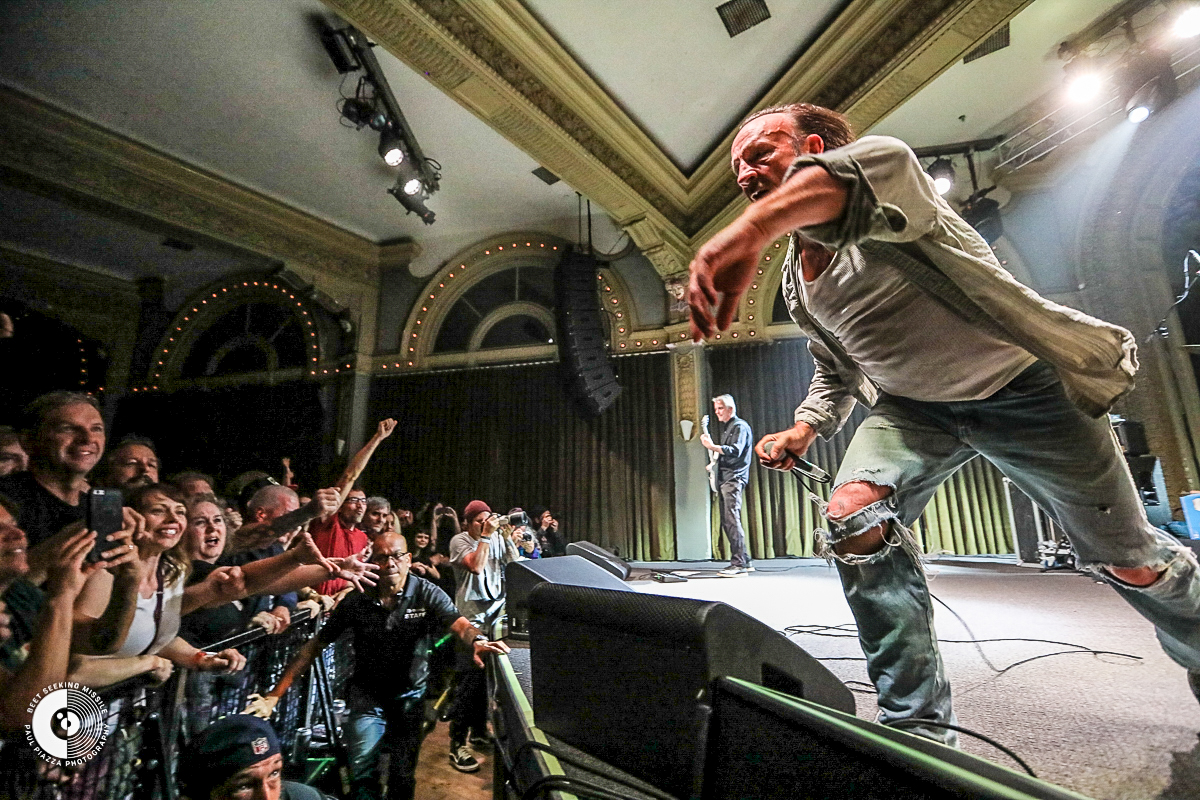 The result for the rest of the show was a less-packed venue and all this spacing created room to hoist another beer and sing along with the band as they blasted into the second half of the show with the thumping “Gladiator.” Yow seemed to enjoy riding the crowd on the venue’s famous “floating floor,” which truly has a springlike quality. The singalongs continued through the encores as the band pounded out yet another incredible set of music. 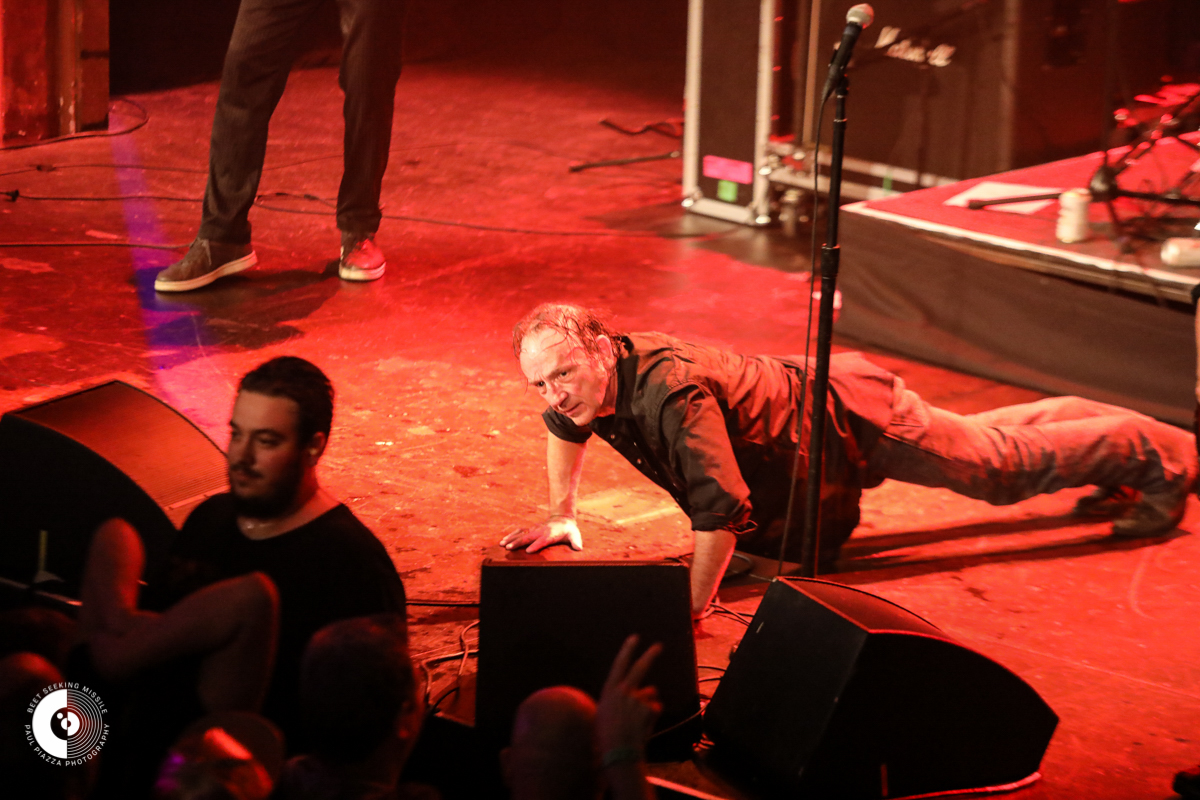 The next day, on the Lyft ride to the airport, we struck up a conversation with our Somali driver. His religion forbade him to listen to music and he was curious about how we found peace in the music we listened to. Fair question. However, after these two shows the answer was quite simple: the musical community that came together to see The Jesus Lizard at these stops had one thing in common: we knew we were fortunate to witness two incredible performances in the Northwest by one of the greatest heavy bands to ever walk the planet. Many had traveled from all over the US and Canada. There is no telling whether they’ll plan future tour dates. In fact, these shows didn’t feel really like a farewell, more like an opportunity to remind the world there is no substitute for their badassery.