ZZ Ward brought grit and sexiness to The Regency Ballroom with her modern take on blues, which is roots-based mixed with a touch of hip-hop flair. Decked out in a fedora, patent leather mini skirt and thigh high boots she didn’t resemble your typical blues artist but that didn’t deter her from singing and playing the guitar with style and belting it out on the harmonica like a seasoned pro. Out on tour promoting her latest chart topping album, The Storm, Ward is gaining attention from critics and has already appeared on Jimmy Kimmel Live!, Conan, Good Morning America, and the Tonight Show. At 31 years of age, she has toured with Eric Clapton and Gary Clark, Jr and had her music appear in the feature film We’re the Millers. 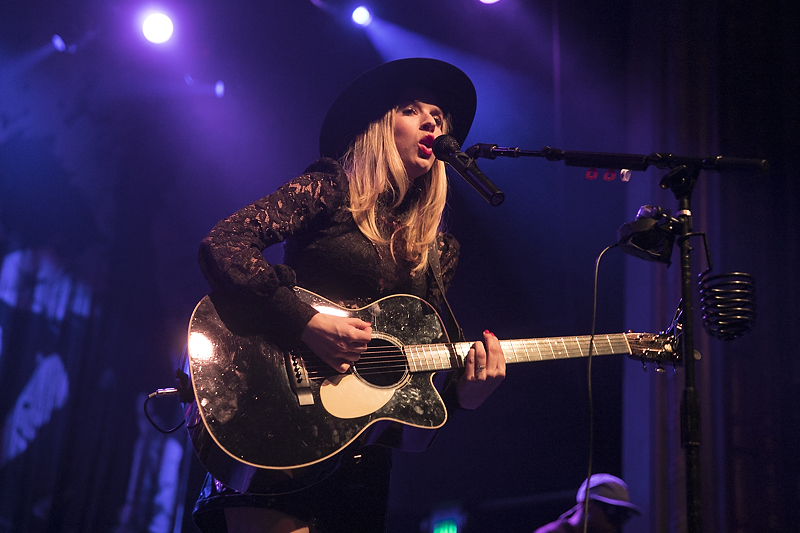 The show at The Regency began with a solo slide guitar leading the tune “Let it Burn” before Ward appeared on stage to loud cheers. Ward has loads of stage presence and a voice that resembles Linda Ronstadt’s with the added phrasing of Etta James. The beginning of the set included some poppier tunes including “The Ghost” and “Put the Gun Down,” both of which had the audience clapping and dancing. In the sultry “Cinnamon Stix,” Ward engaged the crowd in a call and response with the lyrics, “I got good love you’re gonna feel it.” Ward really shined towards the latter part of the set when all of the songs took on a bluesier and sexier tone. The Son House cover, “Grinnin’ in Your Face,” showed that Ward has some skill playing traditional blues, and was evocative and soulful in her singing. Her song “Cannonball,” which she recorded with Grammy award winning blues artist Fantastic Negrito, showed her at her very best with sultry singing, melodic lead guitar playing, and a kick ass harmonica solo. 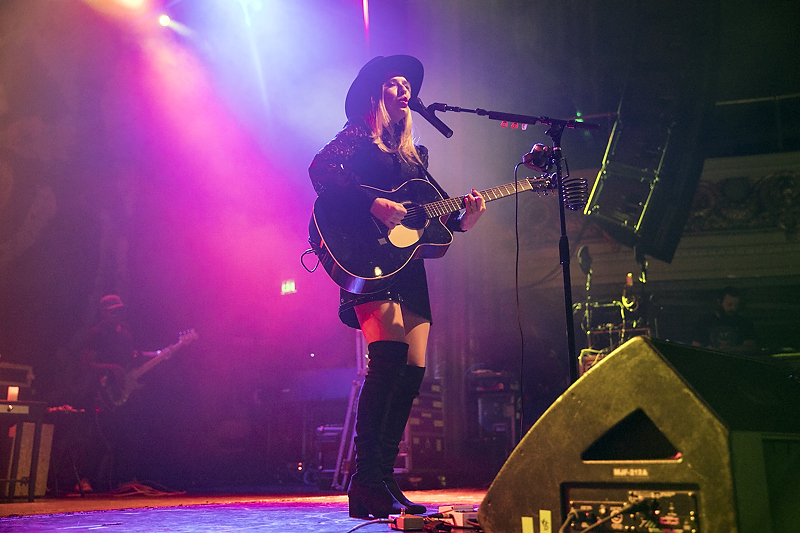 The set finished up with a couple more hip-hop flavored pop hits, including “She Ain’t Me,” with its cocky lyrics about dealing with an ex and their new girlfriend. She finished the set with a new song, “Down Low,” that she said was being recorded later in the week for the James Corden hit TV show ‘Carpool Karaoke.’ 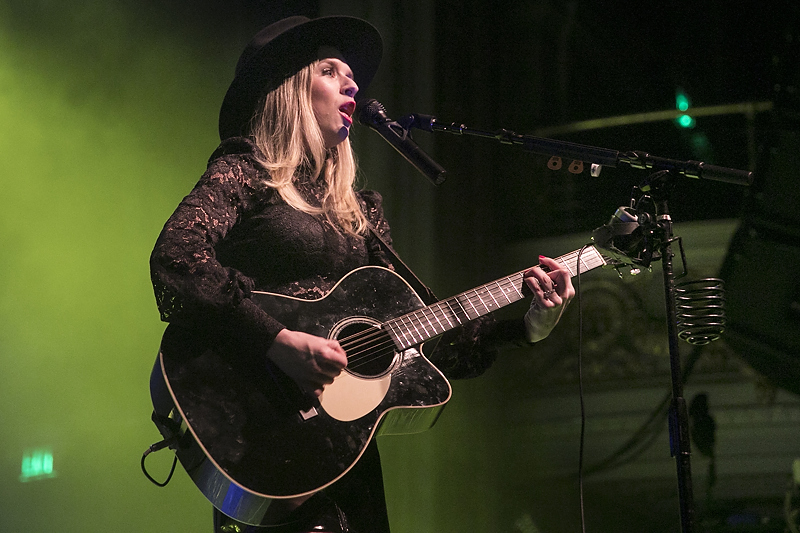 We definitely see Ward’s star continuing to rise as she has the talent, looks and stage presence for mass appeal. We hope she stays grounded in the blues as we think that’s where she’s at her best and her true passion for music comes through.

Opening for Ward was the mind-blowing duo Black Pistol Fire, who played a wildly entertaining set that melded blues and punk. Guitarist and lead singer Kevin McKeown was leaping off the drum riser, running madly around the stage and doing backbends while guitar soloing. He was equally matched by Eric Owen on drums, with a powerful Jon Bonham style and hair-flipping goodness of an 80s metal band. Both players were extremely talented and the energy level was high during the whole set.

The crowd was quickly won over and was hollering and going crazy with excitement from start to finish. Originally from Toronto, Canada, the band is now based out of Austin, Texas and they are making a name for themselves on the live circuit playing large festivals like Bonnaroo and Lollapalooza as well as sharing the stage with such top acts as Heart, Gary Clark, Jr, Black Rebel Motorcycle Club, and Weezer. A highlight of the set was the Led Zeppelin cover, “Oh Well,” which sounded almost unreal in that only two people were performing. We’d highly suggest seeing these guys if you ever get the chance. Their live set is fire.

Starting off the show was singer guitarist Billy Raffoul. The 22-year-old has a low gruff voice similar to Bruce Springsteen or Joe Cocker and songs had a Neil Young vibe. The ladies were enjoying his modelish good looks and long hair. We thought he really shined during the solo number “You Be Love,” where his soulful and powerful voice was front and center and just accompanied by acoustic guitar. It was chill inducing. The song “Dark Four Door” was also strong and had some great backup vocals from the female bass player and a haunting melody that stuck with you. We think Billy has a lot of raw talent and we hope he continues making great music. We’ll be sure to keep on eye on him to see when he comes through town again.

Here’s a slideshow with more photos of all three acts by Raymond Ahner:

For more information about ZZ Ward, see her website.