Iconic blues-rock trio ZZ Top came through San Francisco to play the Warfield Theater on a Sunday night, putting on an incredible performance that allowed them to showcase their prodigious talents as musicians, playing a solid collection of hits, covers, and deep cuts from their lengthy discography. 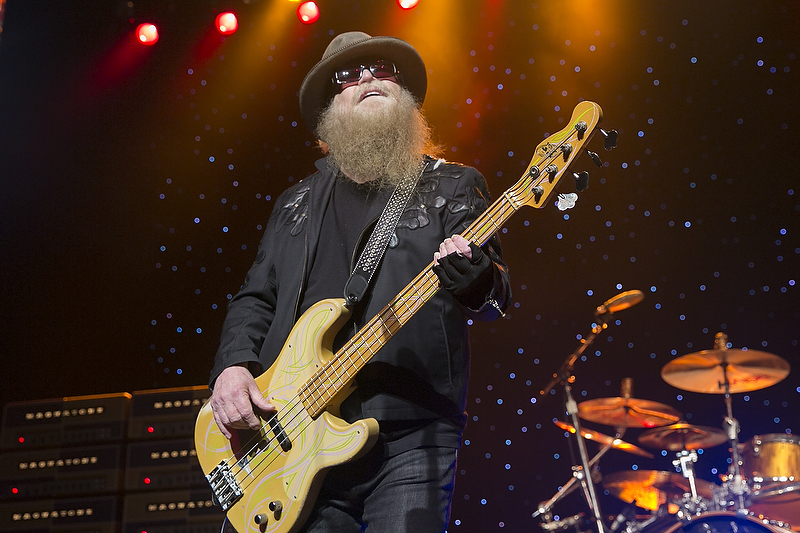 They opened with the frenzied rock of “Got Me Under Pressure,” a classic track of off the legendary Eliminator album. The song seemed to take on new life in a live setting, ditching the 80s sheen of the original to become an up-tempo blues rock tune, driven by Dusty Hill’s fat and distorted bassline. The song featured the first of many incredible guitar solos from Billy Gibbons, who asserted total control and mastery over the instrument, taking just a few quick notes to get his point across. As per usual, Gibbons and Hill were sporting chest length beards, sunglasses, and matching jackets, a look that they have kept up for the past 35 years of near nonstop touring and recording. 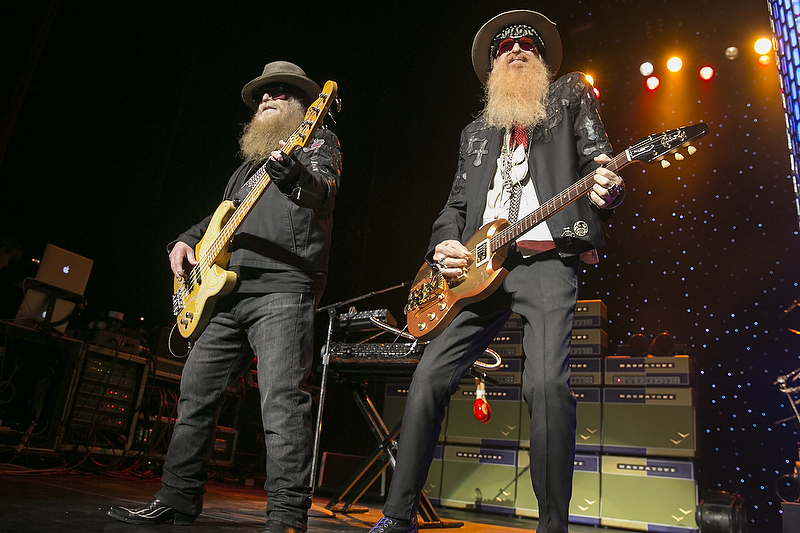 Next the band tore through a blistering rendition of “Waitin’ for the Bus,” delivering a scorching and stomping slow blues jam that once again allowed Gibbons to showcase his guitar chops. After rolling through a few more classic songs the band played a track off of their latest album La Futura, “I Gotsta Get Paid.” The song, like many ZZ Top classics, relies on a greasy, slippery guitar riff over which Gibbons lays down his trademark raspy snarl. It would seem as if age has only intensified his delivery, making it lower, throatier, and dirtier, suiting this type of song perfectly. 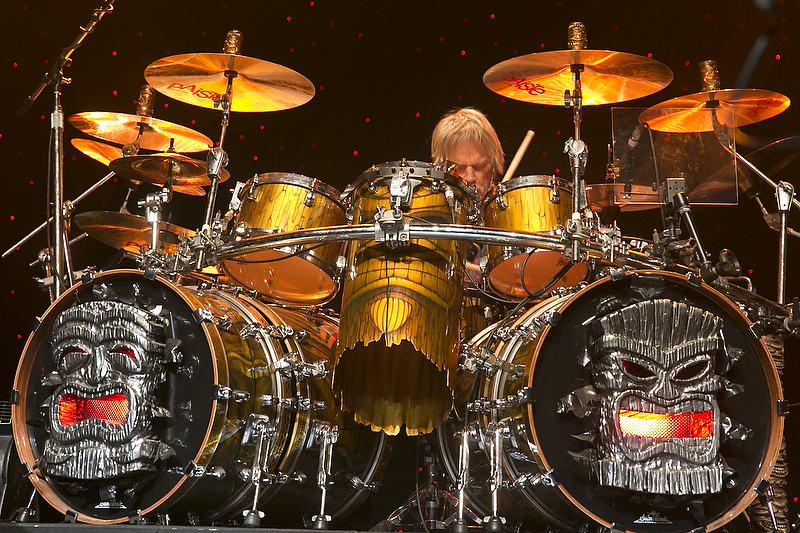 A little while after this, the band ripped through a couple of spirited covers, starting with the Jimi Hendrix staple “Foxy Lady,” stripping it down to its core as a popping and jagged piece of rock n roll. Directly following this was a fierce cover of the Muddy Waters tune “Two Trains Runnin’,” which was transformed into an overpowering rocker thanks to the thunderous and powerful drumming of Frank Beard. 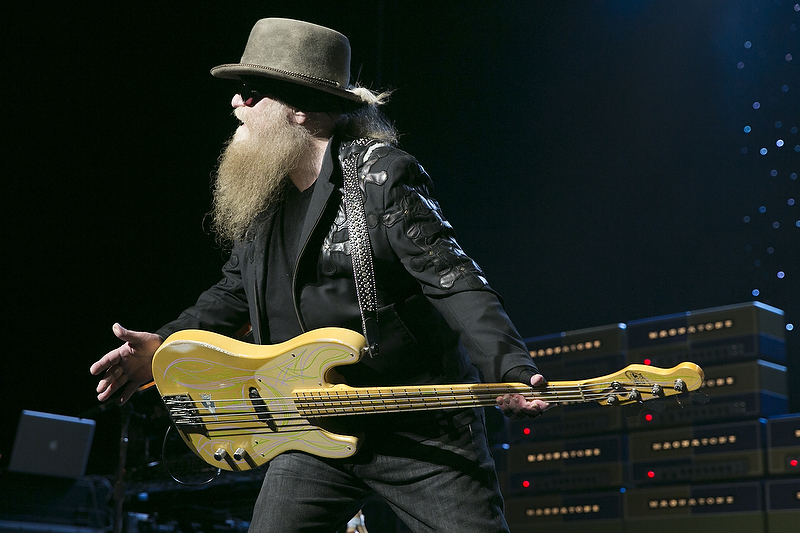 After a brief break from covers in the form of the catchy shuffle of “Cheap Sunglasses,” the band dedicated their next cover to Jeff Beck, who they had just finished touring with and who had insisted that they do a country song together on stage, taking the form of the Merle Travis track “Sixteen Tons.” While sticking closely to the original arrangement and sound, ZZ Top added just enough of their trademark grit to swing the piece into familiar sonic territory, as it appeared to seamlessly fit alongside their other originals in the set. 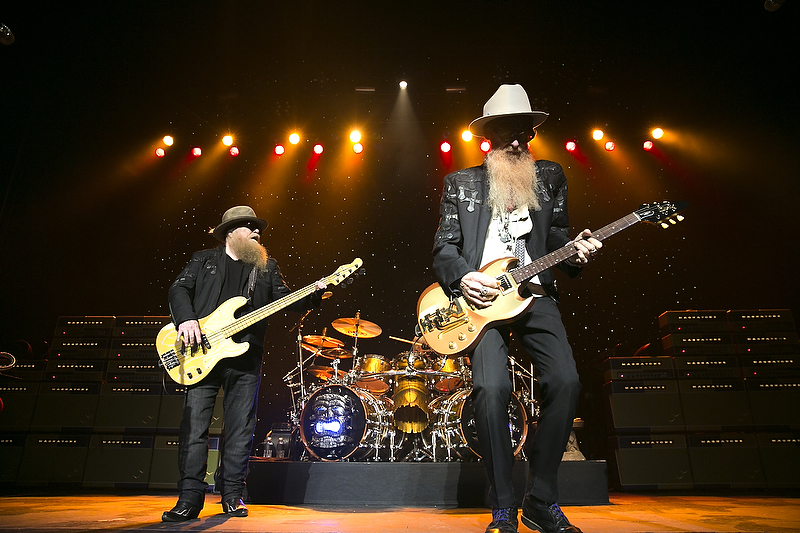 ZZ Top continued to play more classics as the night wound down, including a stomping and rousing rendition of their signature song, “La Grange.” The piece begins with a simple yet evocative guitar figure, over which Gibbons croons at the lower end of his range before signaling the band to come in at full swing, transforming the song into a revved up rocker as Gibbons rips through some of his most inspired soloing. While many guitarists are content to fling notes off the fret-board at astonishing speeds, Gibbons manages to do more with a few well-placed notes and bends than most guitarists do with ten times the number of notes, a true testament to his talents as a musician. 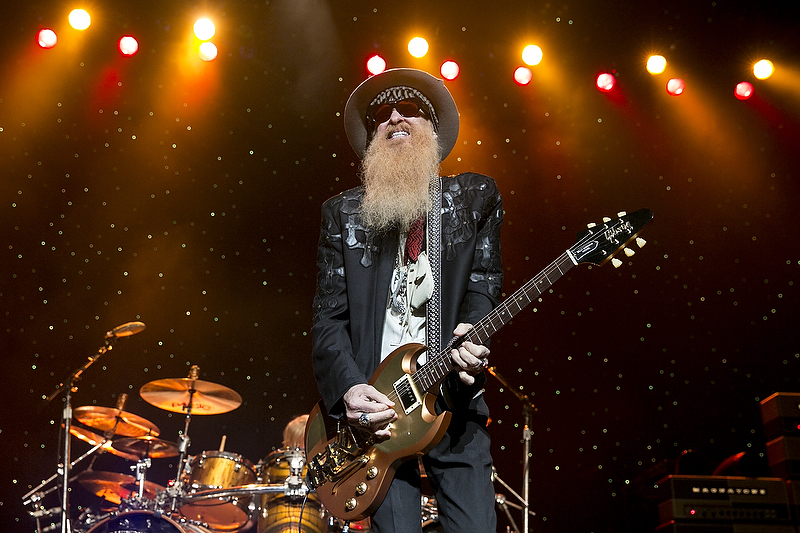 For a final encore the band rolled out a supremely rocking version of “Jailhouse Rock,” closing out the night with a great deal of energy. It is remarkable that a band that has been around for 45+ years can still sound so good live and still deliver sizzling performances. ZZ Top continue to stand as one of the most engaging live bands out there and easily lived up to their legendary status as one of the greatest rock bands of all time.

Here’s a slideshow with more photos of ZZ Top by Raymond Ahner:

Find out more about ZZ Top on their website.