X finished off their 40th anniversary tour with a phenomenal set at The Regency Ballroom in San Francisco on the night before New Years Eve. Formed in 1977, the legendary punk band never received wide mainstream success but were groundbreaking in their use of rockabilly, poetic lyrics and off kilter harmonies from vocalist/bassist John Doe and his then girlfriend vocalist Exene Cervenka. Their debut album, Los Angeles, was produced in 1980 by Doors keyboard player Ray Manzarek and was well received by critics and the media. In 1981 the band released Wild Gift, which was named “Record of the Year” by Rolling Stone. This was also the year they were featured in the classic documentary The Decline of the Western Civilization by Penelope Spheeris (who also made Wayne’s World), which documented the Los Angeles punk scene including Black Flag, The Germs, Circle Jerks, and Fear. 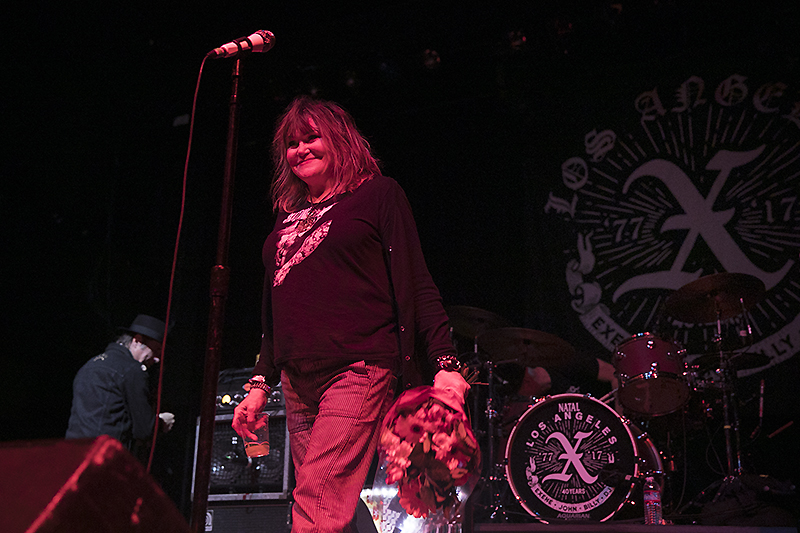 In 1982, X signed to Elektra records and released Under the Big Black Sun, which had a more country sound, and in 1983 they released More Fun in the New World, which had a slightly more polished and radio friendly vibe. In 1985 they released Ain’t Love Grand in an attempt to gain more commercial radio airplay; shortly thereafter guitarist Billy Zoom left in frustration when the album didn’t receive the commercial success they had hoped for. 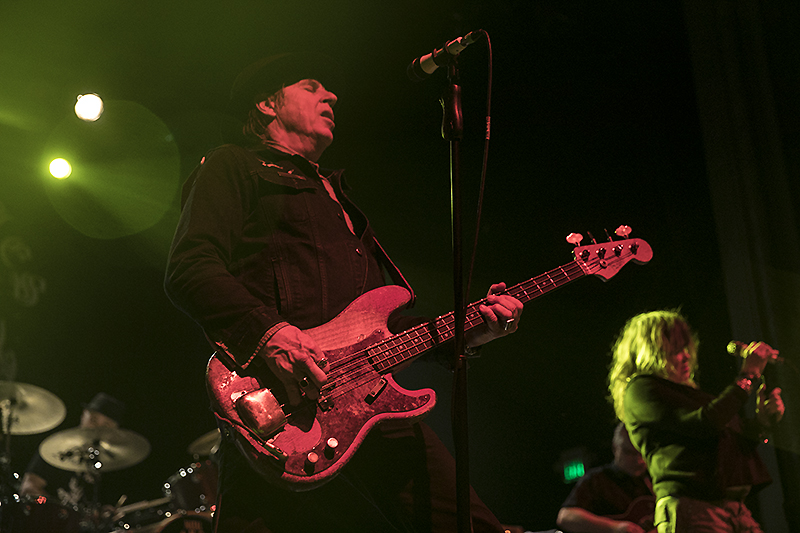 After several reincarnations the original members reformed again in 1993 to record Hey Zeus, which was a return back to their punk roots sound. From 2004 onward, the band has continued to play live although they haven’t recorded any new material since then. In July 2015, Billy Zoom took a few months off from performing in order to undergo treatment for bladder cancer. He returned in November of 2015 to resume touring with the band. 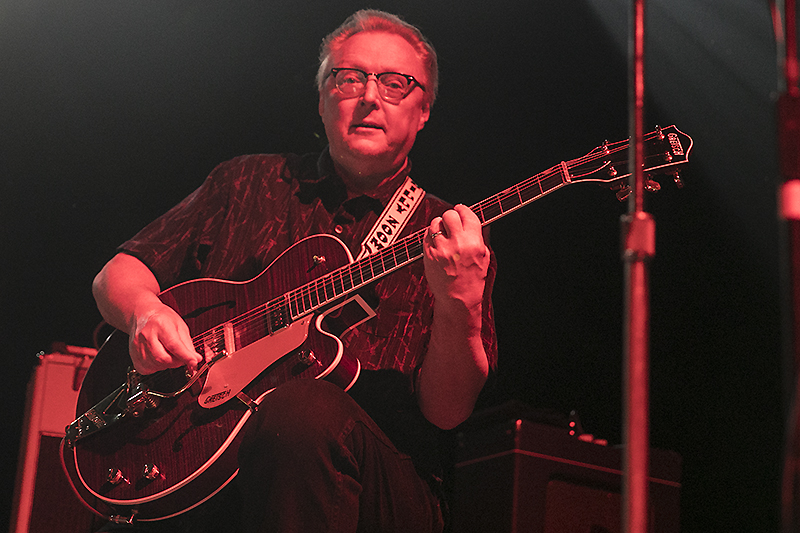 The show at the Regency included a broad setlist that included highlights from their long and amazing career. Along with original members John Doe, Exene Cervenka, Billy Zoom, and drummer DJ Bonebrake, Craig Packham filled in on drums and rhythm guitar. This allowed Billy Zoom to play saxophone on some songs and DJ Bonebrake to play the vibes. The band which is known for their vibrant and high energy live sets were on fire on this last night of the tour. They’ve managed to never lose their passion and even though they’ve had to make some adjustments as they’ve gotten older and Billy needs to remain seated throughout the set, they’ve created something even more powerful than they had before. Their harmonies sound better than ever and they’ve added a soulful and sexy vibe to their punk rock sound. 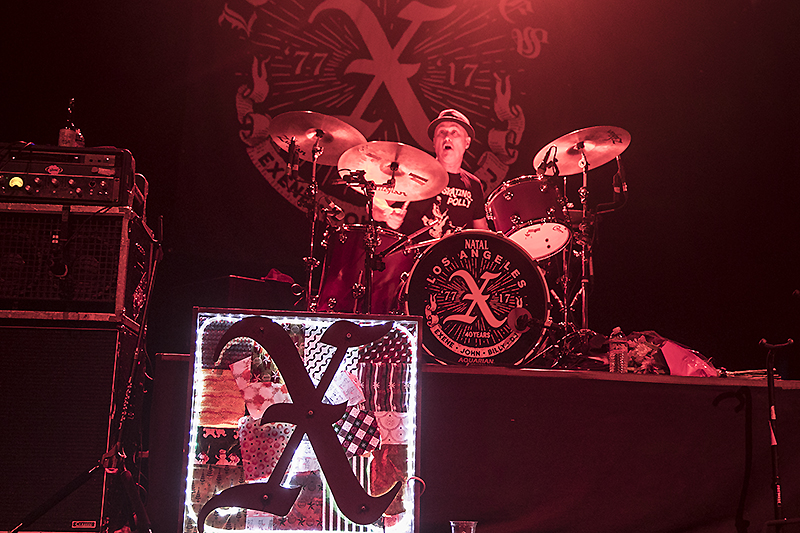 X started the set off with some fast numbers, ‘In This House That I Call Home’ and ‘We’re Desperate,’ and they never slowed down during the hour and a half set. John Doe was at his sweaty hand-banging best while Exene swirled her hips and flirted with members of the audience while they yelled out, “We love you Exene!” over and over. They played a high energy version of ‘Breathless’ which included a great solo by Billy Zoom which drove the crowd wild. The hit ‘Dancing with Tears in My Eyes’ included some terrific harmonies from John and Exene. From there they went on to play a soulful version of ‘Come Back to Me’ that had some wonderful saxophone playing by Billy Zoom and had DJ Bonebrake playing the vibes. They played a poppy version of ‘True Love’ before going in to an extended and sexy version of ‘Hungry Wolf’ with a fantastic drum solo, and included wolf cries and moans from John and Exene that raised the temperature in the room from hot to smoldering. 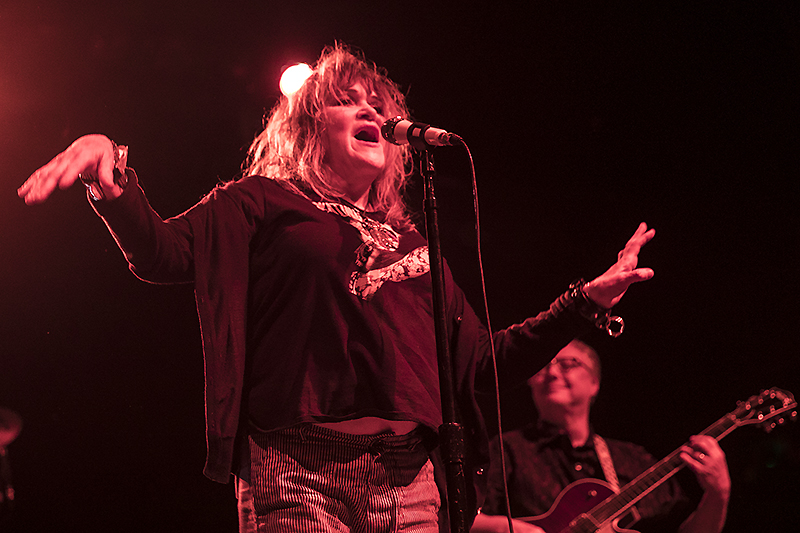 After another soulful tune ‘I Must Not Think Bad Thoughts’ the band kicked it in to high gear for the rest of the set with fan favorites ‘Los Angeles.’ ‘Nausea,’ and ‘Jonny Hit and Run Pauline’ that got the crowd, which had been loud but mostly standing, rolling around into a circle pit. They ended their set with super-fast punk rock versions of ‘Motel Room in My Bed’ and the Doors ‘Soul Kitchen’ before returning for an encore with ‘The Once Over Twice’ and their classic ‘The New World.’ At the end of the set John said, “I think for some people it’s been a pretty tough year and that’s ok. I’m really glad I get to share the stage with these guys.” We’re hoping these guys continue to keep on playing as long as they can as they’re still one of the most vibrant and exciting live acts out there today and their passion comes through in everything that they do. 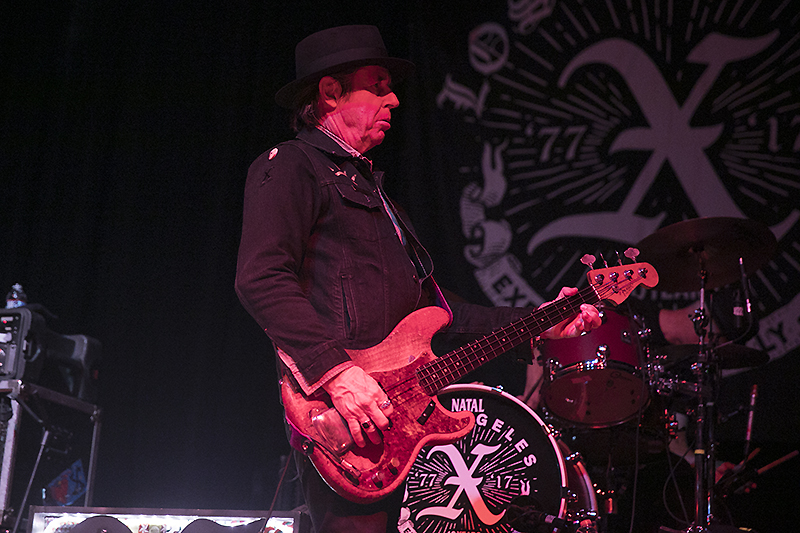 Here’s a slideshow with more photos of X by Raymond Ahner:

Setlist: Beyond And Back | In This House That I Call Home | Because I Do | It’s Who You Know | The Once Over Twice | Adult Books | Breathless (Jerry Lee Lewis cover) | Dancing With Tears in My Eyes | Come Back to Me | Poor Girl | Year 1 | The Hungry Wolf | The World’s a Mess, It’s in My Kiss | The Unheard Music | I Must Not Think Bad Thoughts | Los Angeles | Nausea | Your Phone’s Off the Hook, But You’re Not | Johny Hit and Run Paulene | Motel Room In My Bed | Soul Kitchen (The Doors cover)