All photos by Paul Piazza

Sharon Jones is not afraid to share the fact that she is fighting cancer. In fact, she’d rather her fans not only knew but join in the fight with her. The great soul singer has been battling pancreatic cancer since being diagnosed in 2013. It’s come and gone and now it’s come back again. 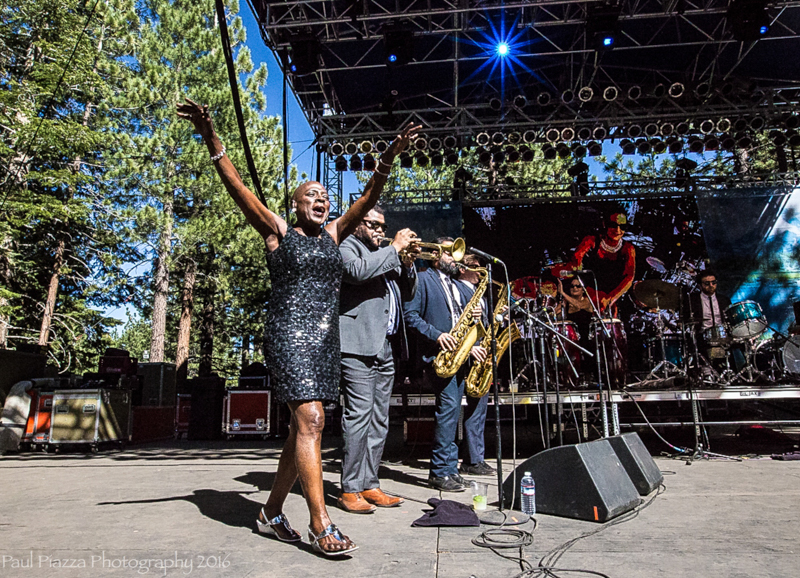 Sharon Jones and the Dap Kings

But despite a situation that would cause most to want to stay as comfortable as possible as they went through treatment, the five foot one powerhouse continues to hit the road and make music. And late one Sunday afternoon, she and the phenomenal Dap Kings brought the Mammoth Festival of Brews and Blues to a close with a powerful set that many will remember for years to come. 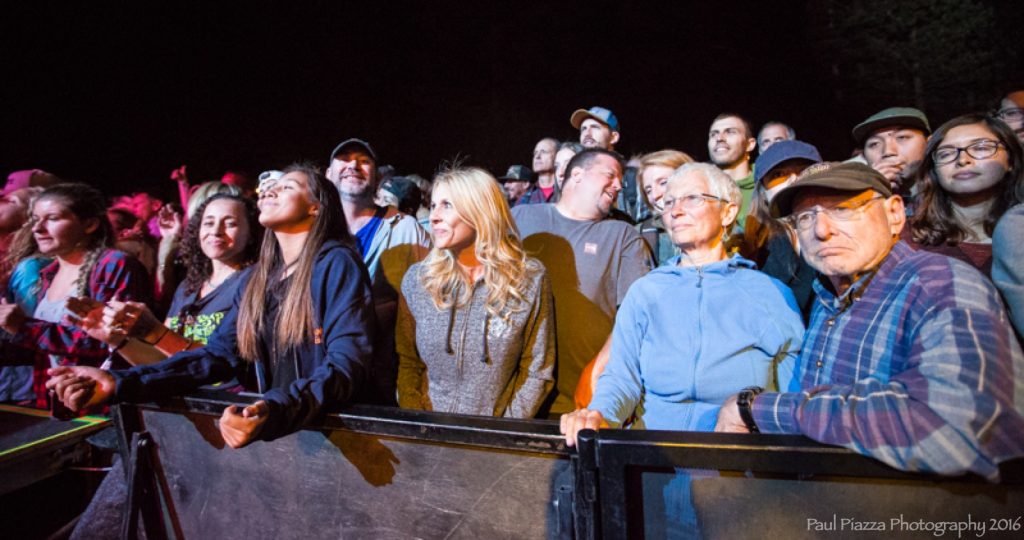 Her fiery, inspirational performance capped off a stellar weekend at The Mammoth Festival of Brews and Blues, or Bluesapalooza as it’s more commonly known. This four day extravaganza set in the heart of Mammoth Lakes, featured top talent from the world of blues and soul and some of the best brews on the planet. 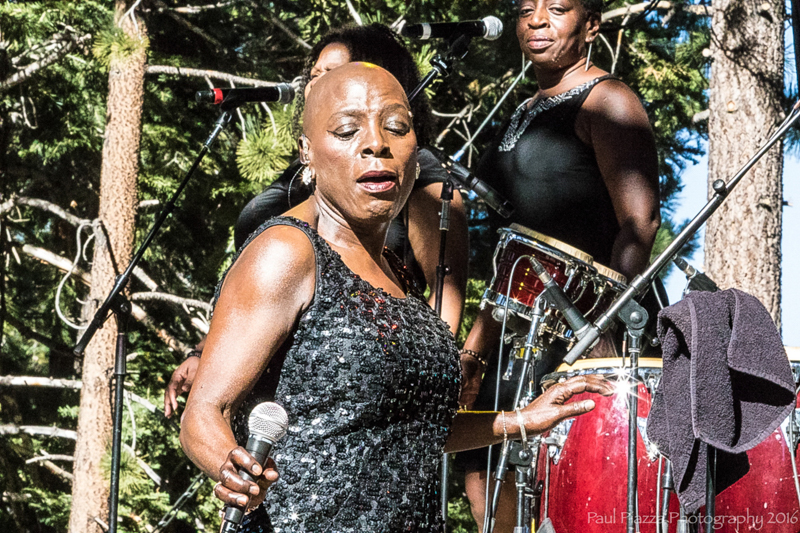 Now in it’s 21st year, the festival has evolved into an event that features top-tier entertainment, an extraordinary beer tasting event as well and much much more. Over 100 breweries were on hand during the tasting event, which occurred on Saturday and Sunday. Beers from all corners of California and a few from out of state were represented. San Diego, the beer juggernaut, was well represented. But smaller upcoming brewers like Berryessa Brewing from Winters and Eel River Brewing of Fortuna made a strong showing. Naturally, Mammoth Brewing Company, one of the festival’s sponsors, was on hand. Their signature festival beer, a passion fruit-infused IPA called Passion for the Blues was a big hit all weekend long. 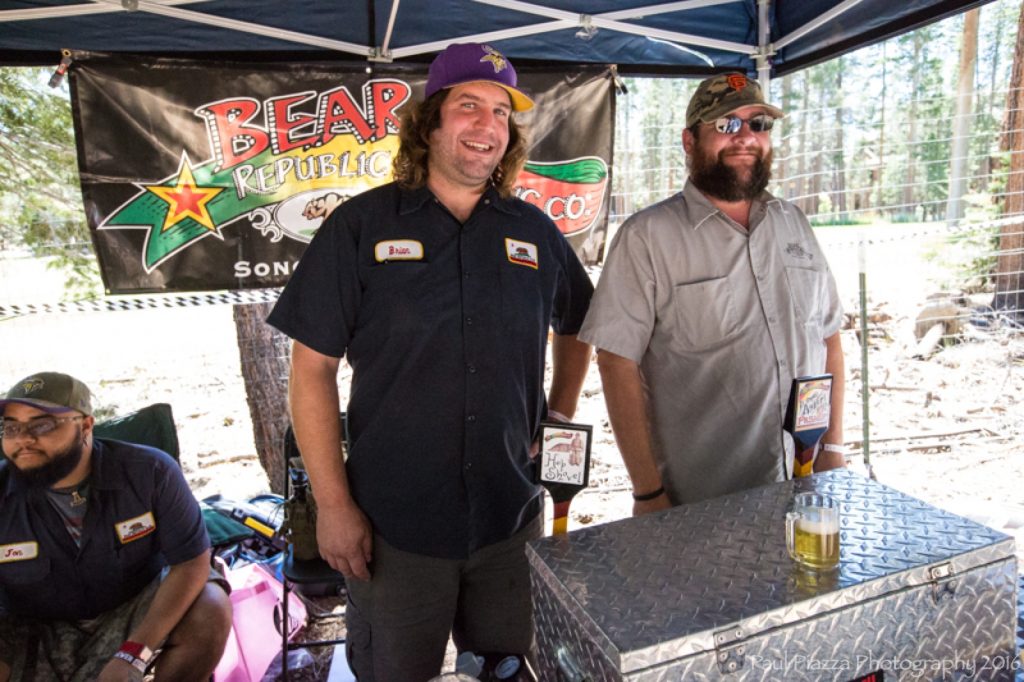 The festival began as a small event held in the parking lot of the infamous Whiskey Creek establishment (now home to Mammoth Brewing Company). Orginally, the idea was to create a fun event with music and hand-crafted beers for locals and summer regulars. Nowadays, it’s become an excellent destination festival.

Folks from all over attend the festival, which is held just down the hill from the brewery at the spacious Sam’s Wood Site. In this sprawling area, there is plenty of room for clothing and craft vendors as well as a mouth-watering food selection. Everything from gourmet confections to barbecue to lumpia to fresh barbecued oysters were available.

But back to the music. The four-day festival began with Beyond Blues Thursday, a night that featured Michael Franti and Spearhead and indie pop artist Zella Day. Franti, who started his career as a militant rap artist, has mellowed significantly since the the early 90s. His songs of peace, love, and healing have helped him reach a significant crossover crowd of music lovers. He has always carried a positive message within his music and has the keen oratorical skills that enable him to work a crowd. He split his time between the main stage and a smaller stage in the crowd that brought him closer to the audience. During one song, he had audience members alternately square-dancing, holding hands in a circle, and then hugging. 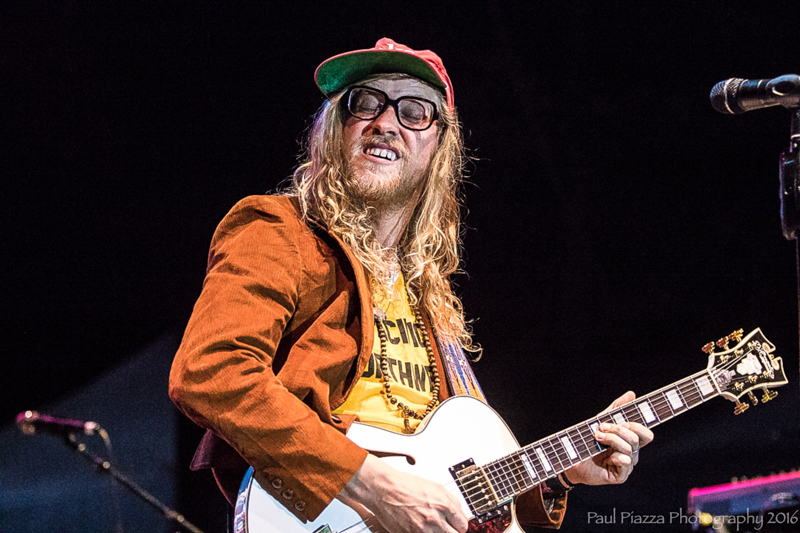 The next night featured a pair of stellar artists in Allen Stone and Beth Hart. Stone is a rising star with a neo-soul feel. His hippy ethos and goofy grin charmed the crowd, but what really knocked them out were his stellar pipes. At times, he sounds like a cross between Donny Hathaway, Stevie Wonder, and Marvin Gaye. Hart is a blues-rocker at heart, whose music has many soulful and jazzy influences. She alternated between the piano, an acoustic guitar and some good-old fashioned crowd exhorting rock. Both were very well received. 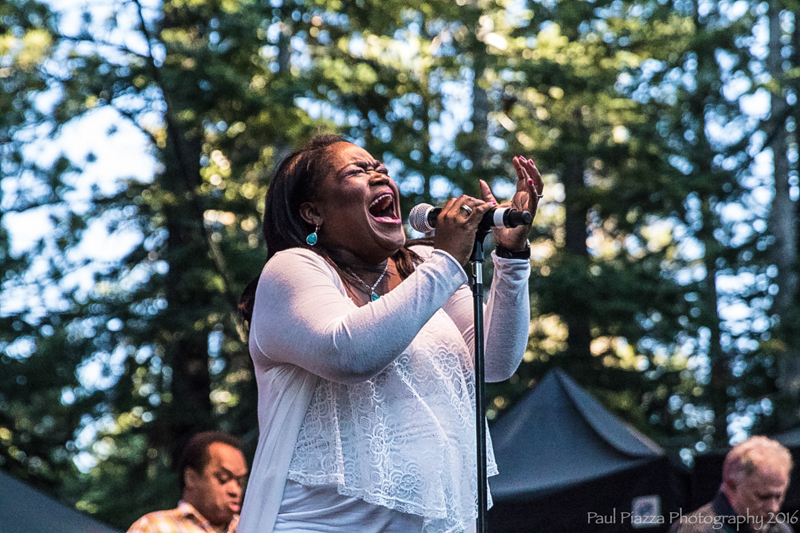 Saturday night featured Shemekia Copeland, whose most recent album, “Outskirts of Love,” was nominated for a Grammy. With a voice that is alternately seductive, forthright, and roaring, the blues siren played a spirited set that evoked emotion and included some great anecdotes, including her intro to “Drivin’ Out of Nashville,” a song about a body in a trunk that includes elements of country, blues, and gospel. 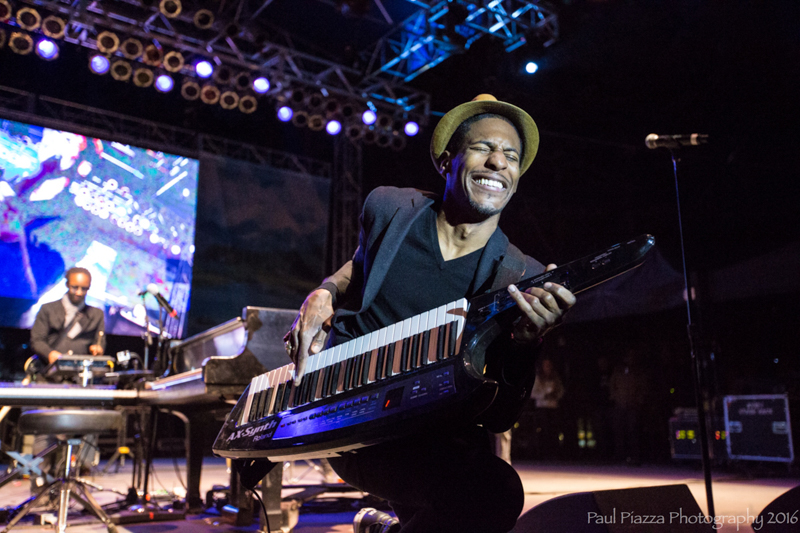 Saturday night’s headliners, Jon Batiste and Stay Human, have received international acclaim since becoming the house band on The Late Show with Stephen Colbert. Batiste and his extremely talented bandmates, all of whom attended Julliard, began playing in New York in 2005. A New Orleans native, Batiste infuses his compositions with a soulful jazz swing. Stay Human is a band with constantly moving parts. Batiste bounces between piano, percussion and the melodica. During their set, the band ventured into the crowd second-line style or what they call creating a “love riot.” Not a bad idea on a Saturday night. 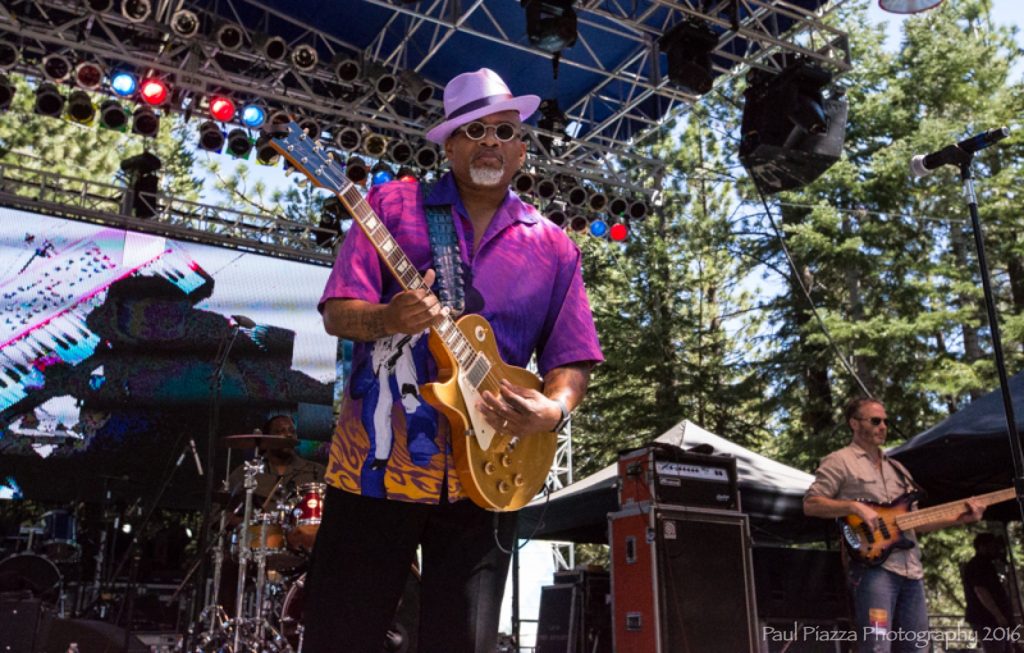 There were other excellent acts on the undercard each day. Some standouts included San Francisco’s The Stone Foxes, who riled up the crowd with a great set during the heat of the day on Friday. Also, exceptional was Chicago’s Toronzo Cannon, whose guitar theatrics wowed the crowd. There was also a smaller stage called the Minaret Acoustic Stage, which featured scaled-down sets from some of the main stage artists. 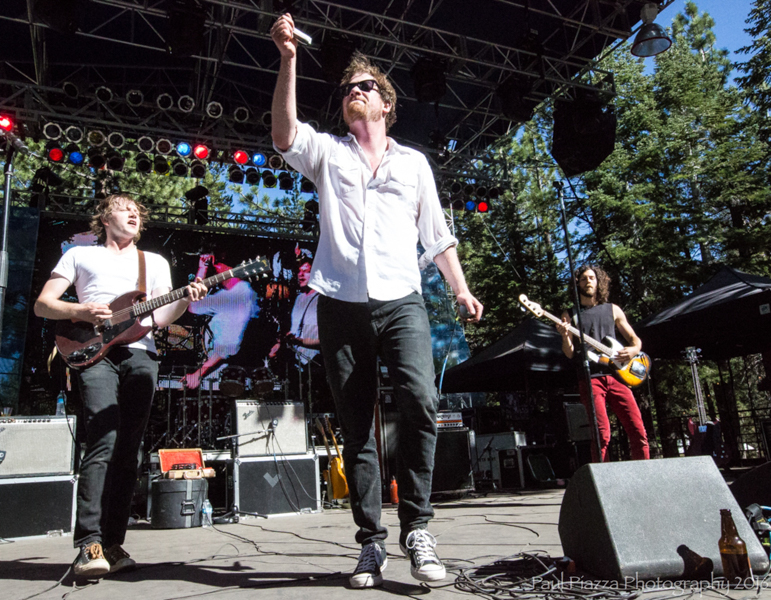 But it was Jones, due to start radiation treatment a few days after the festival, who evoked the weekend’s most engaged response. “I have cancer. Cancer don’t have me,” said the singer early in the show. She danced hard, noticeably winded a few times by the altitude. At times, she seemed a little lost due to the heat and what she calls “chemo brain.” But with quick reminders from the band, she dove back into it with gusto. 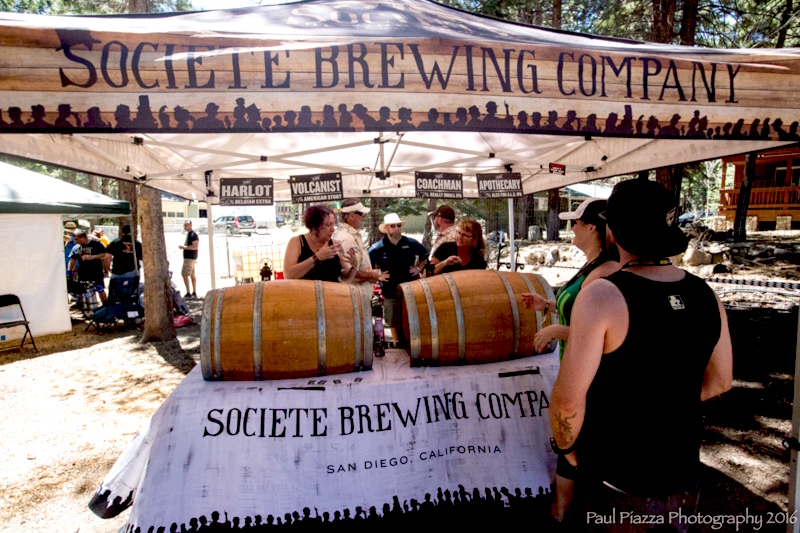 When a a small scuffle broke out between a couple of patrons in the packed crowd later in her set, the former Rikers Island correctional officer didn’t hesitate to address the fray. She stopped the band, took control of the situation and scolded the participants. Moments later, she was back in the thick of it onstage, telling cancer to “Get Up Get Out.” And the crowd at Bluesapalooza was right there with her.