For the first time in 5 years, Finnish melodic metal band Wintersun returned to San Francisco to deliver an impressive set that pulled from their three studio albums as well as a brand new song. 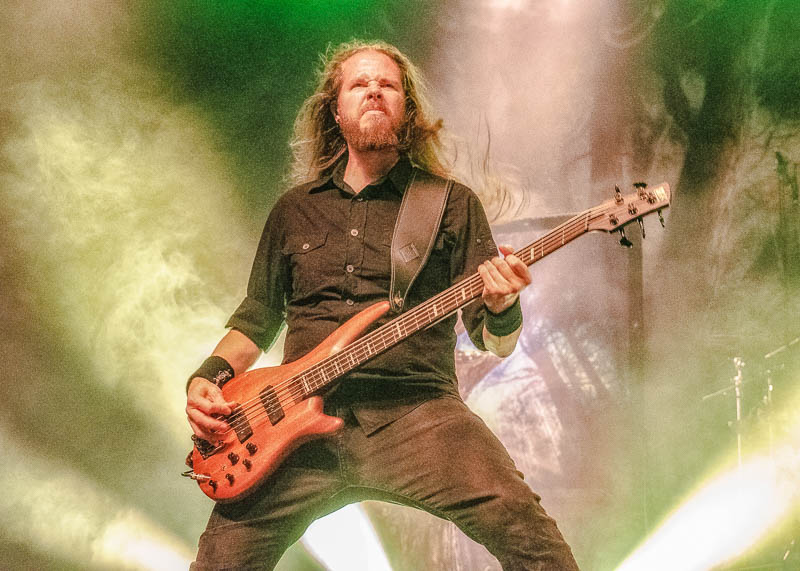 The band wasted no time in rolling out the powerful metal of “Awaken From The Dark Slumber (Spring),” a perfect example of Wintersun’s epic music. With a dense web of chugging guitars, pounding drums, and slick bass, along with Jari Mäenpää’s high-flying vocals, the song got the crowd going. Mäenpää recently changed positions in the band to focus solely on vocals, which paid off big time as he was on point throughout the night, dominating the stage with his presence. 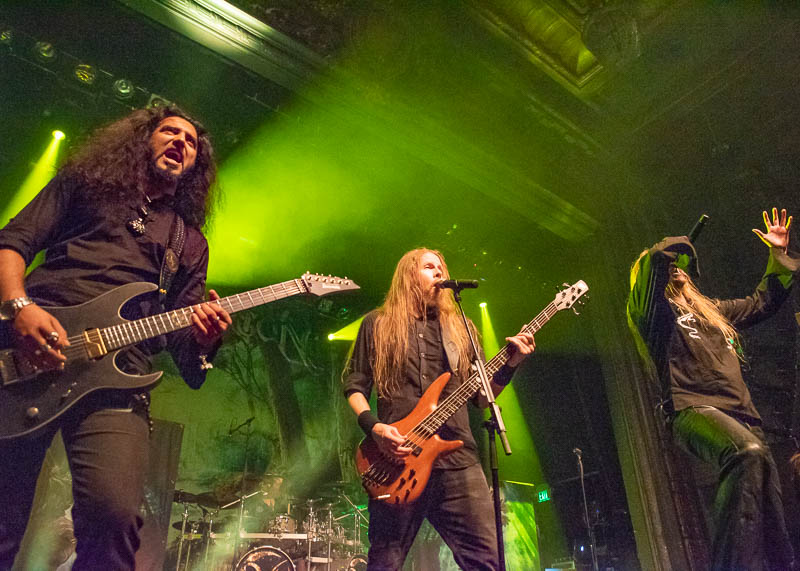 Asim Searah has recently stepped into the role of rhythm guitarist, and he sounded incredible the entire set, not an easy task with such complicated music. The crowd went nuts when Mäenpää introduced the next song, the furious “Winter Madness,” a classic off Wintersun’s self-titled debut album. Anchored by an impressive series of drum beats from Heikki Saari, the song mixed deep, growled vocals with clean backing vocals from the rest of the band. As usual, lead guitarist Teemu Mäntysaari was superb, delivering plenty of raging guitar leads. 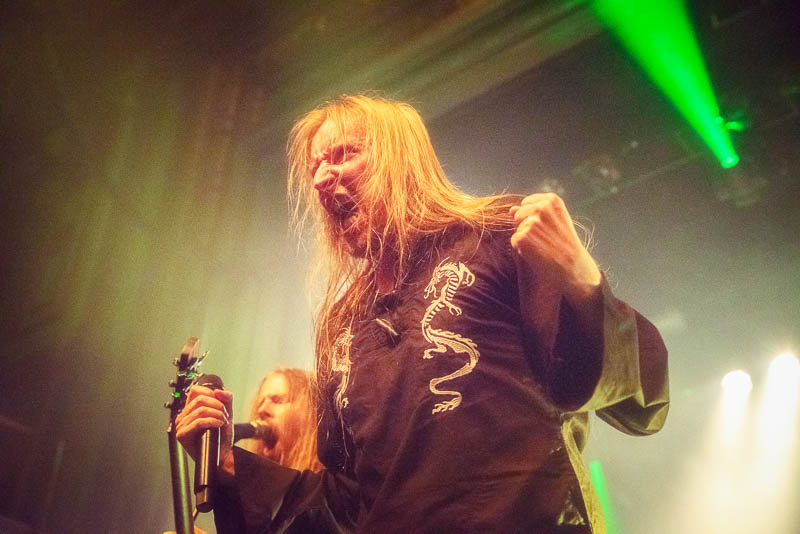 Wintersun slowed it down a bit for the next song, another old classic in the form of “Sleeping Stars,” which began with a stately mid-tempo groove along with some clean guitar work from Searah. Eventually the paced quickened up and an epic series of melodies contrasted with harsh vocal lines.

A few songs later, Wintersun tore through the best song of the night, the towering epic “Sons of Winter and Stars.” At 14+ minutes in length, the piece covered so much musical ground that it was hard to keep track of everything, especially as a blistering mosh pit opened up once the song erupted from the PA system. The first part of the song traded furious riffs and slamming blast beats before breaking into a slightly slower tempo. Mäenpää sounded incredible as he effortlessly switched between harsh growls and soaring clean vocals. 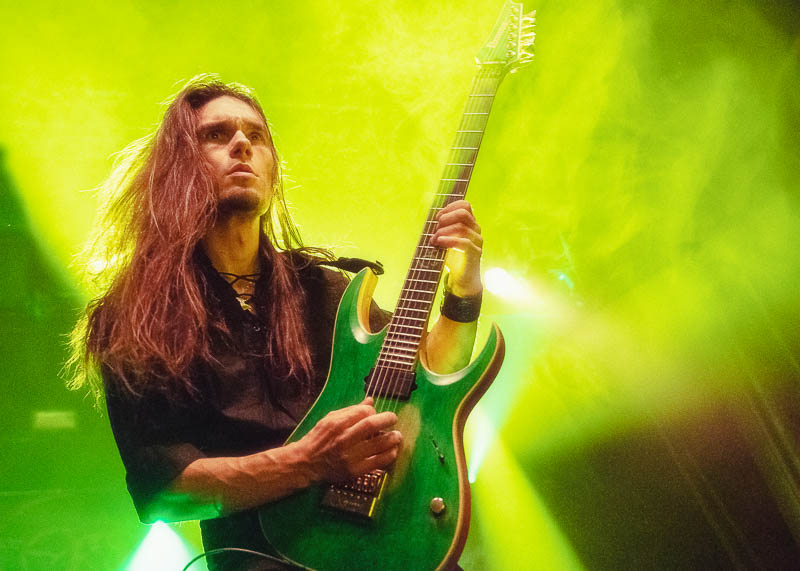 The sheer technicality and stamina required to perform such a song was impressive to behold and Wintersun kept the momentum the rest of the night. As they continued to alternate between old and new material, the group unveiled a brand-new song, which many fans have taken to calling “Storm.” The song was vintage Wintersun and it had some new twists and turns to it than much of their older material. 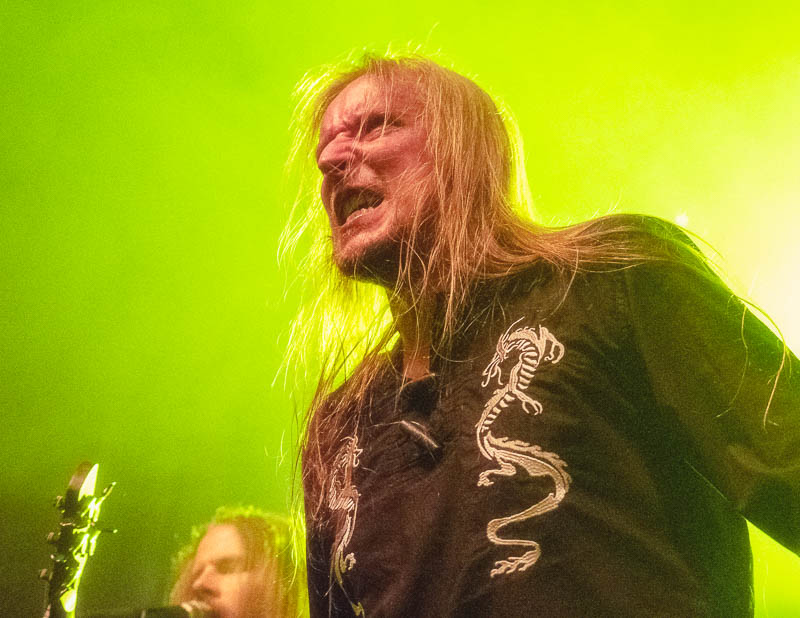 Finally, Wintersun ended the night with yet another lengthy epic, “Time.” Containing another set of crazy guitar leads and slamming drums, “Time” was the perfect way to close out the evening. The song had plenty going for it, with Jukka Koskinen delivering some rock-solid basslines and Mäntysaari and Searah engaging in some beautiful twin guitar harmonies.

Few metal bands can deliver the kind of anthemic and powerful live set as Wintersun, who have once again demonstrated that they are at the top of their game when it comes to performing on the live stage.