The tension in the Fox Theater was palpable as throngs of fans shuffled into the venue and dashed to cluster at the foot of the stage, ready for the Oakland date of the Press Restart Tour. After over a year and a half of silence, Walk the Moon are still able to draw sold-out crowds to their shows–something that can be difficult for the most successful of bands. 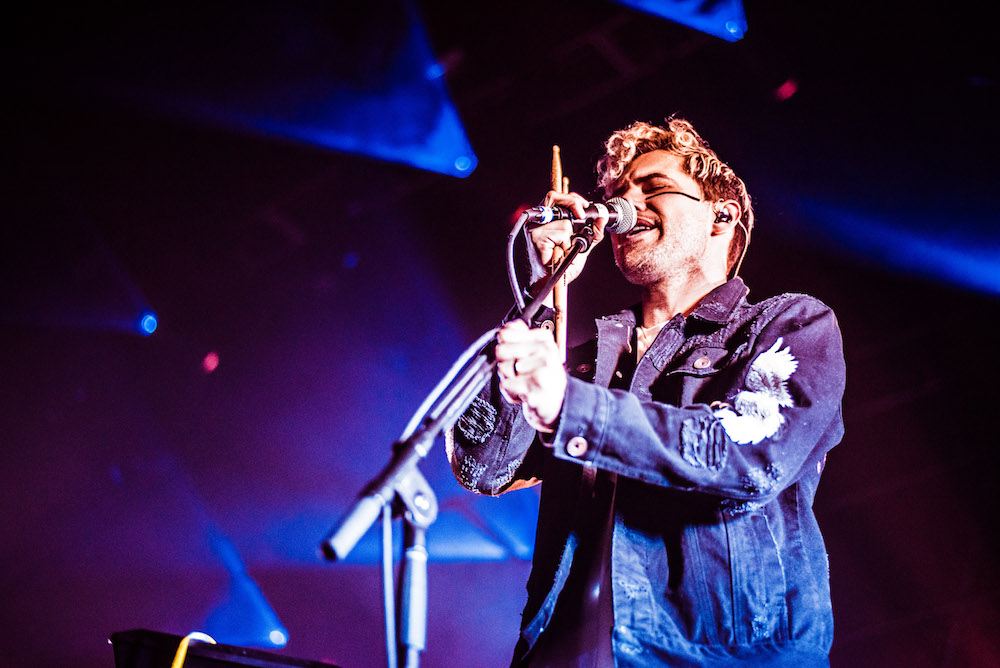 Walk the Moon consists of of frontman Nicholas Petricca on vocals, keyboard and synth, Kevin Ray on bass, Sean Waugaman on drums, Eli Maiman on guitar, and touring member Lachlan ‘Lucky’ West. The Cincinnati based new-wave-indie-pop-rock-dance conundrum of a band had a meteoric rise in the early twenty teens, beginning with the self-release of their debut album I want! I want! and their summer chart-topping song “Anna Sun.” Three months after a phenomenal step into the alternative world’s peripherals Walk the Moon was signed to RCA records, and quickly went on to tour with a variety of well established and well beloved alternative performers, including Young the Giant, Panic! at the Disco, Weezer, and Grouplove. 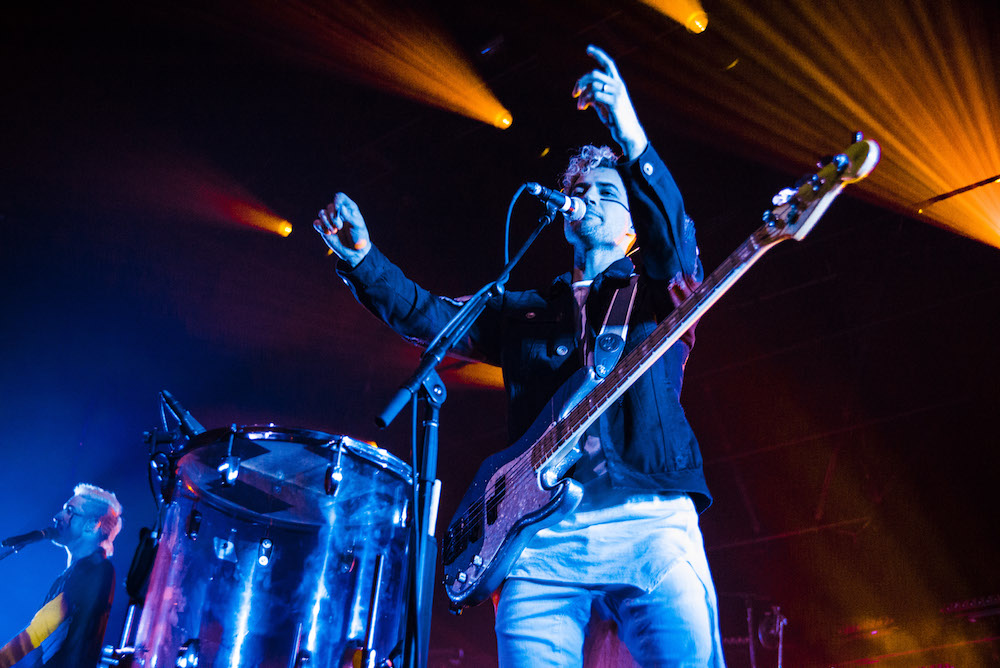 Having the opportunity to tour with cornerstone groups while having “Anna Sun” and brand new single “Shut Up + Dance” streaming through radio speakers and being added to Spotify playlists was evidence of the stars aligning for the band. They were easily gaining widespread praise from critics and other music industry personalities for the songs from their upcoming sophomore album release Talking is Hard, but there was something much more unique to this group than shockingly soaring sales numbers and rankings on Top 100 lists worldwide. 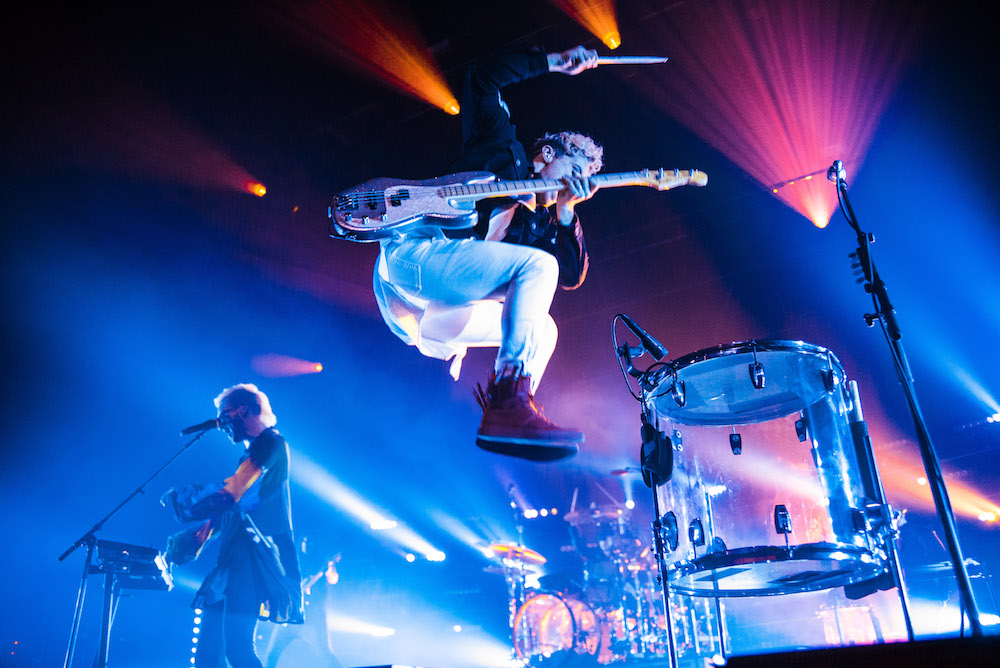 From the inception of Walk the Moon they’ve made a point of drawing attention to the power dynamics of fans and artists. In the group’s infancy, they began performing with face-paint; designs of dots and lines with bright splashes of color, and it quickly took root as a tradition for the band, and for the audience. A sort of unification of everyone in the room; everyone marking themselves as a family and as an individual within that family. 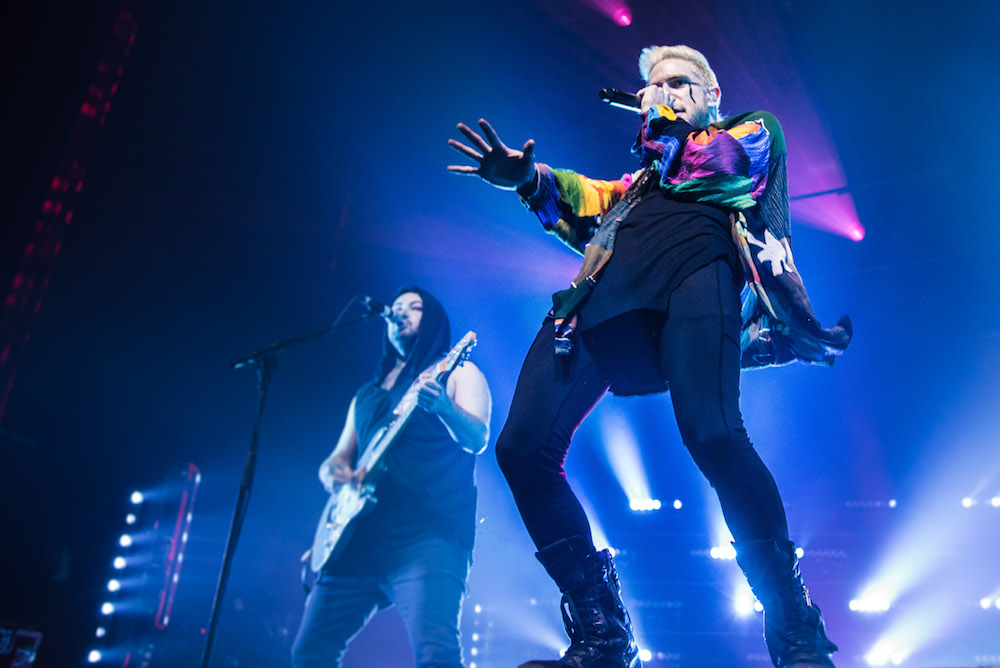 In early 2016, however, Walk the Moon’s incredible upwards projection hit a snag that made the future of the band tenuous and uncertain. Frontman Nicholas Petricca’s father, who had been suffering from early on-set Alzheimers, took a turn for the worse. They announced that their biggest headlining tour yet, to take place later that year, would be cancelled so that Petricca could return home. 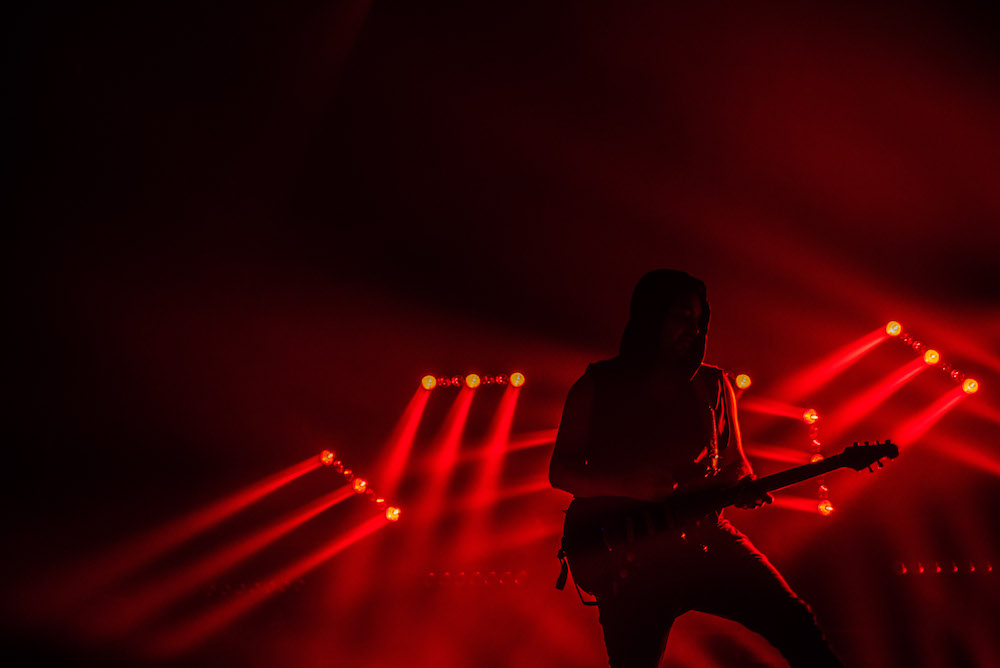 Silence fell over the band and their social accounts for the most part, and as time passed, radio play trickled off, fans moved on, and news outlets stopped updating. Then, a year and a half after the disappearance of the group, a new single was dropped. “One Foot” would go on to set the tone of their new music and the fresh, determined resilience that would accompany the group on their return to music with their third studio album, What if Nothing. 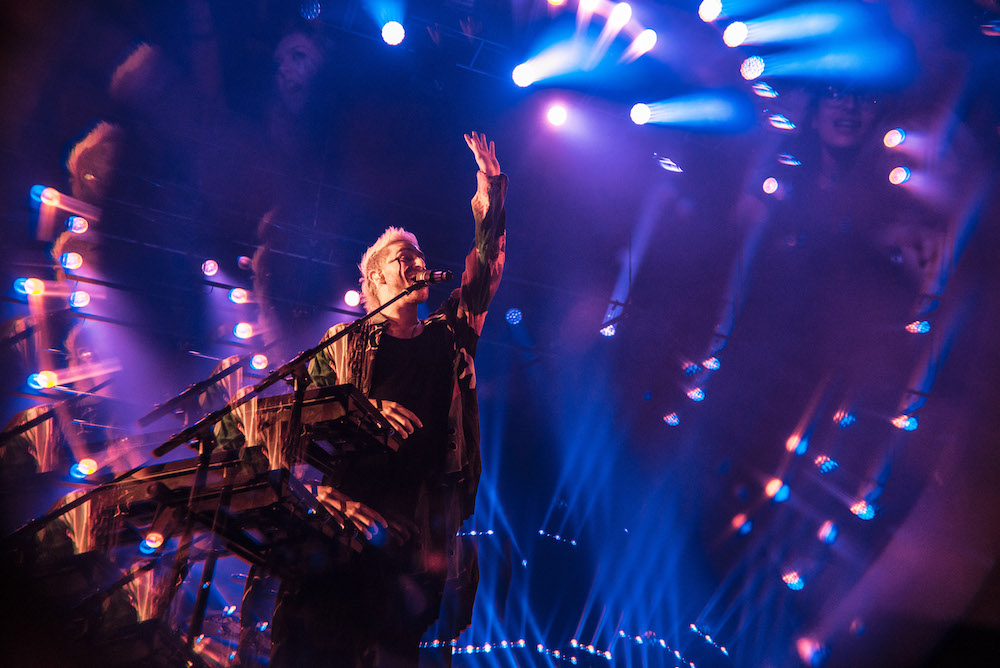 Renaissance, ‘rebirth,’ is truly fitting for the album and the next step in the journey of Walk the Moon, and Petricca. Once again the group had taken their audience along with them, despite the long silence, with a new level of maturity and raw honesty in their most recent release. It’s with a renewed sense of purpose that they take the stage, and the tension that had filled the space dissipated into a seeming sigh of relief. From the fans, because finally Walk the Moon is here, and from the band. After such a long, unexpected drought, people showed up, wearing the bright ’80s colors and patterns and face paint. The family was still alive and breathing, and ready for some music. 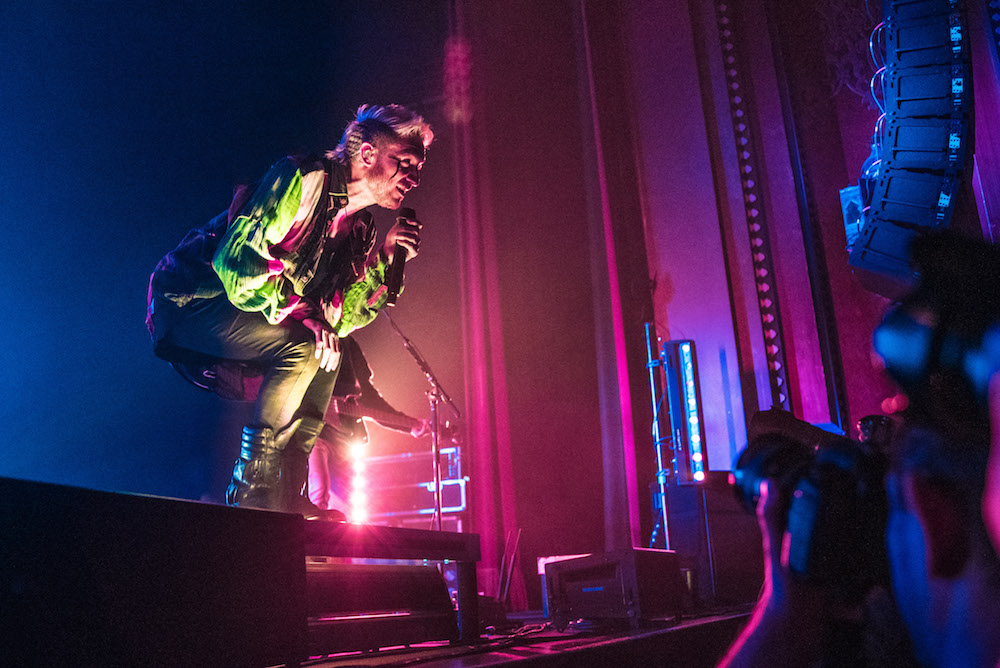 The lights went down, and a high note, bittersweet, filled the space. “Press Restart,” the first song from What if Nothing, turned out to be the perfect song to begin with. With more ’80s synth and a thrumming, nostalgic beat, the song was not just a reminder of the long absence of the band but of what truly happened during that absence, for Walk the Moon and the fans alike. ‘Maybe it’s not an ending, maybe it’s a beginning…I relax my grip, and I roll my wrists, shake loose, I’m like new’ is echoed back to the men on stage. 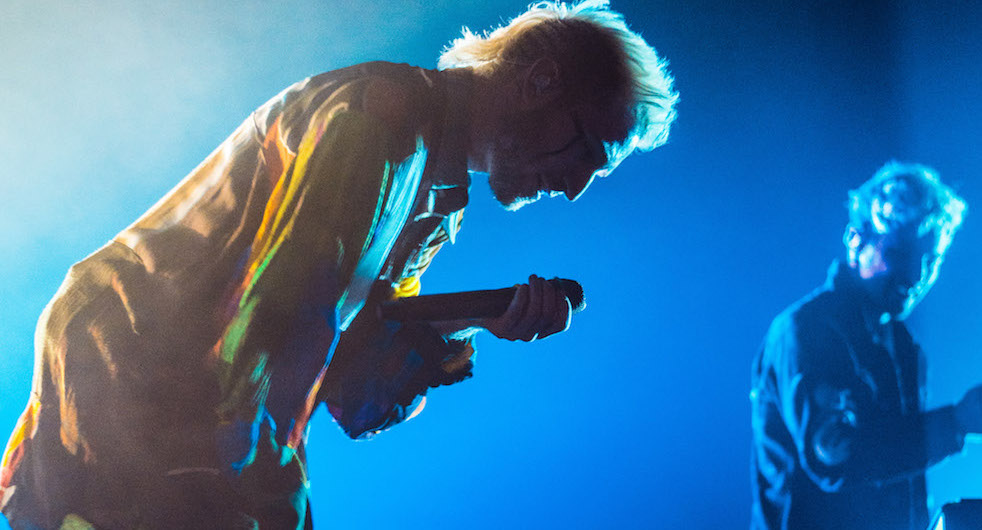 Tears covered faces of fans at the barrier who held their hands outstretched, crying for their own experiences during the year and a half of silence, crying for the high impact emotion in Petricca’s voice and the performance of his bandmates, crying for the rebirth of the band and what it means for this world-spanning, face paint wearing family they’ve found. 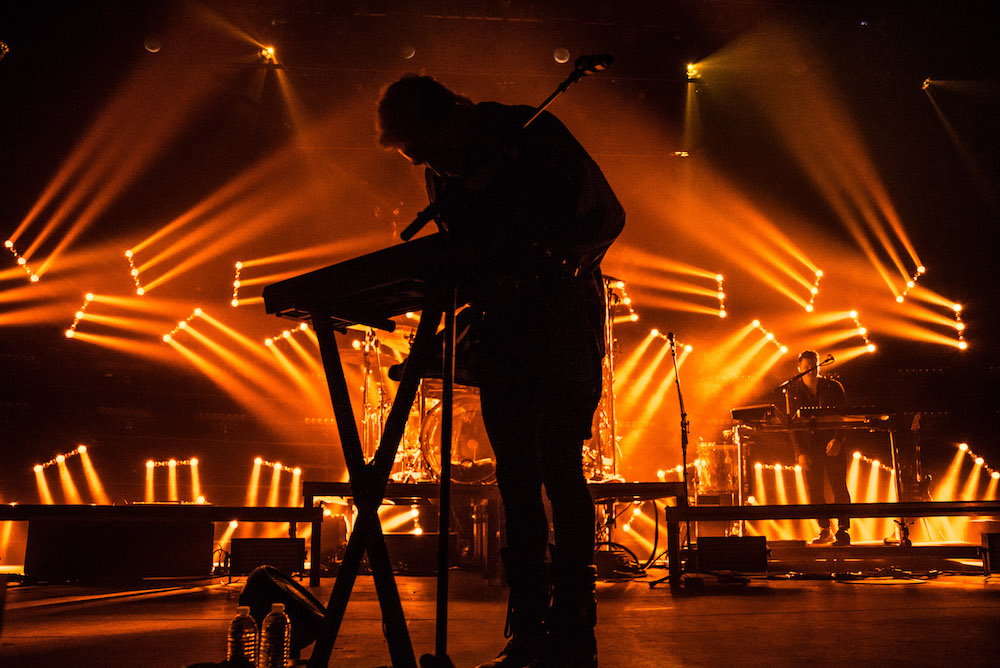 Walk the Moon had always been a special band; a group intent on inclusion, love, and unification, but they’ve come into their own thanks to their long absence. With more experimentation and a startling new vigor that somehow manages to bring an increased energy to their live show than before, they’ve taken the unfortunate situation of going into a hiatus at one of the high points of their career, and they’re better for it. The sold out shows, emotional maturity in their new release, and stunning live performance have shown Walk the Moon to have not just risen from the ashes of an unfortunate situation but to have taken their place back among the stars.

For more information on Walk The Moon, see their website.