Vintage Trouble put on a kickass rock ‘n’ roll show at The Fillmore on a November Thursday night. Formed in Los Angeles in 2010, the band combines rhythm and blues, hard rock, and soul in a style reminiscent of early 50s and 60s bands like The Rolling Stones, Otis Redding and The Yardbirds. Ty Taylor is a fantastic front man resembling a modern-day James Brown who stagedives. Under the management of the legendary Doc McGhee, the band toured outside of the U.S. and decided to grow their fanbase in Europe where they were able to open for such renowned acts on tour as Brian May, Bon Jovi, The Who, The Rolling Stones, AC/DC, and Willie Nelson. The band has put out three studio albums and has appeared on The Late Show with David Letterman, Conan O’Brian, The Tonight Show with Jay Leno, and has played large festivals like Glastonberry, Bonnaroo and Coachella. These guys aren’t getting these big opportunities because they’re some flash in the pan. They’re a really talented group of musicians with incredible showmanship to boot. 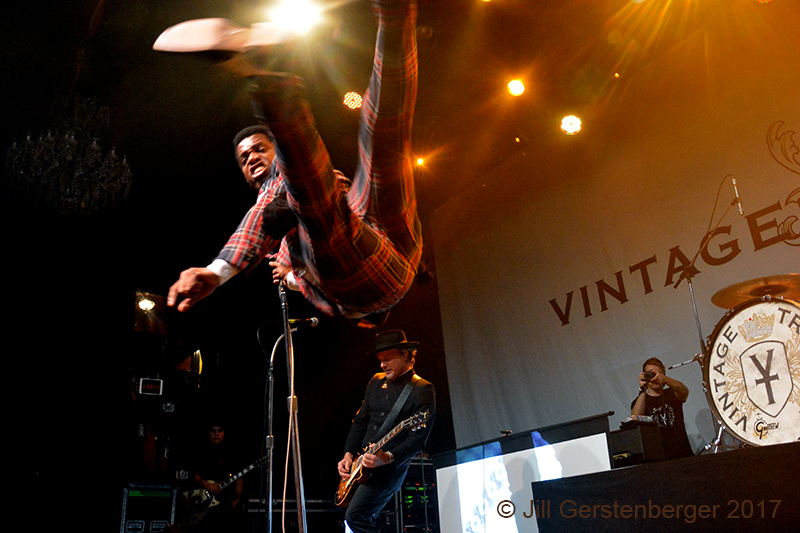 The band didn’t waste any time getting the crowd riled up on this chilly San Francisco evening. After a brief opening band huddle onstage, Taylor had the crowd jumping up and down in unison, soul clapping and singing along to “Strike Your Light,” all while he was making rock star poses and doing a handstand on the drum riser. By the end of the second song, “Blues Hand Me Down,” he’d already hopped offstage and gone deep in to the crowd and emerged back onstage with a cute little fluffy white dog in his arms. We never figured out where the dog came from but he held on to it and sang while we all wondered why there was a dog at the show. He passed the dog offstage to a stagehand and encouraged people to put their cellphones down and dance. 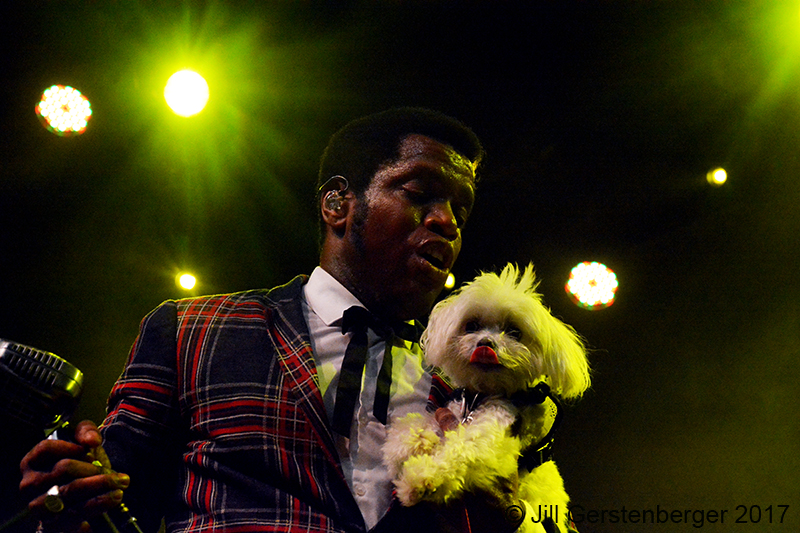 After the dog took his leave, Vintage Trouble went in to a soulful version of “Doin’ What You Were Doin’” that had people swaying back and forth and you could hear that this guy can really sing too. In fact, he’s pretty incredible. Swedish guitarist Nalle Colt really shined on this tune as well. He has a great tone and can slip into a gritty or soulful tune pretty easily. They played a couple more soulful tunes and went in to a wonderful version of “Nancy Lee,” a song that Taylor dedicated to his mom. The band then played a funky extended version of “Crystal Clarity” that had the crowd jumping up and down again; Taylor pulled out a trombone and played it for a few bars. While the band went in to an extended groovy jam, he disappeared and then emerged up in the balcony singing over the edge and then disappeared again and popped up in the back of the room at the soundboard where he asked everyone to gather close around. The midnight public transportation folks had left by now but everyone still at the show gathered around as he stage dived in to the crowd and flipped on his back and sang the bluesy “Run Like the River” while the crowd carried him back to the stage in the front. 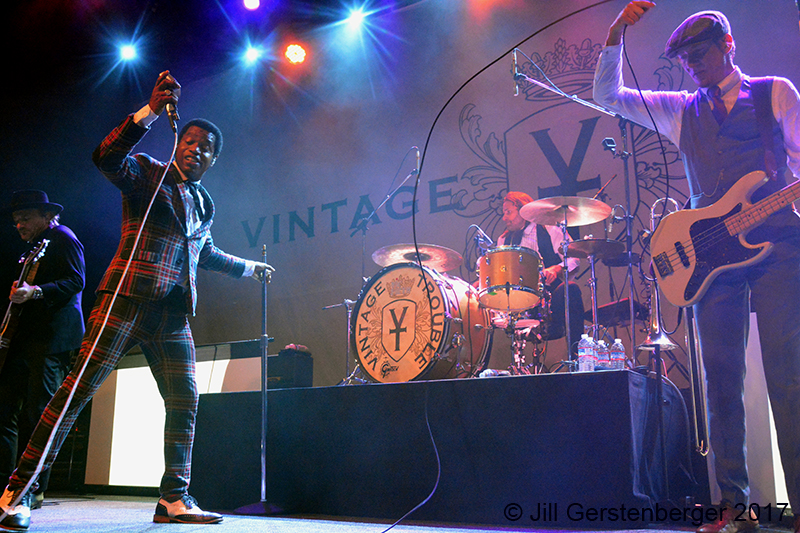 Once Taylor was back onstage the band did high-powered versions of “Knock Me Out” and “Push the Pelvis with Me,” full of pelvic thrusts while the crowd went completely wild. One has to note what a completely gracious performer he was too as he thanked the photographers, sound crew, band, tour manager, videographer, and staff at the venue. It’s not something we’ve seen too often but was a very classy move on his part on their last date of the US tour.

Opening for Vintage Trouble was Desi Valentine. A soul singer with a voice like Smokey Robinson with phrasing like Amy Winehouse, Valentine had some really clever original tunes like “One Night Stand” and “My Own Worst Enemy.” Although his set was just a half hour long, he really won the crowd over with his style, vintage quality, and cynical lyrics. He’s someone we’ll keep our eye out for again.

Overall this was one of the best shows we’ve seen at The Fillmore. We’ve been won over by the talents of Vintage Trouble and Desi Valentine and they’ve moved up the list of must see shows when they come to town. We’re hoping they get back here again soon as we really loved them both. They were just an amazing talented group of people and their love of roots music really shined through and gave us faith in music again.

Here’s a slideshow with more photos of Vintage Trouble and Desi Valentine:

Setlist: Strike Your Light | Blues Hand Me Down | Doin’ What You Were Doin’ | Another Man’s Words | Battle’s End | Love Song to the World | Nancy Lee | Crystal Clarity | Run Like the River | Knock Me Out || Not Alright by Me

Get all the info on Desi Valentine on his website.