Twenty One Pilots (TOP) descended on SAP Center Friday evening and the newly minted Grammy winners showed a sellout crowd exactly why they are one of the biggest up and coming acts in the popular music stratosphere. 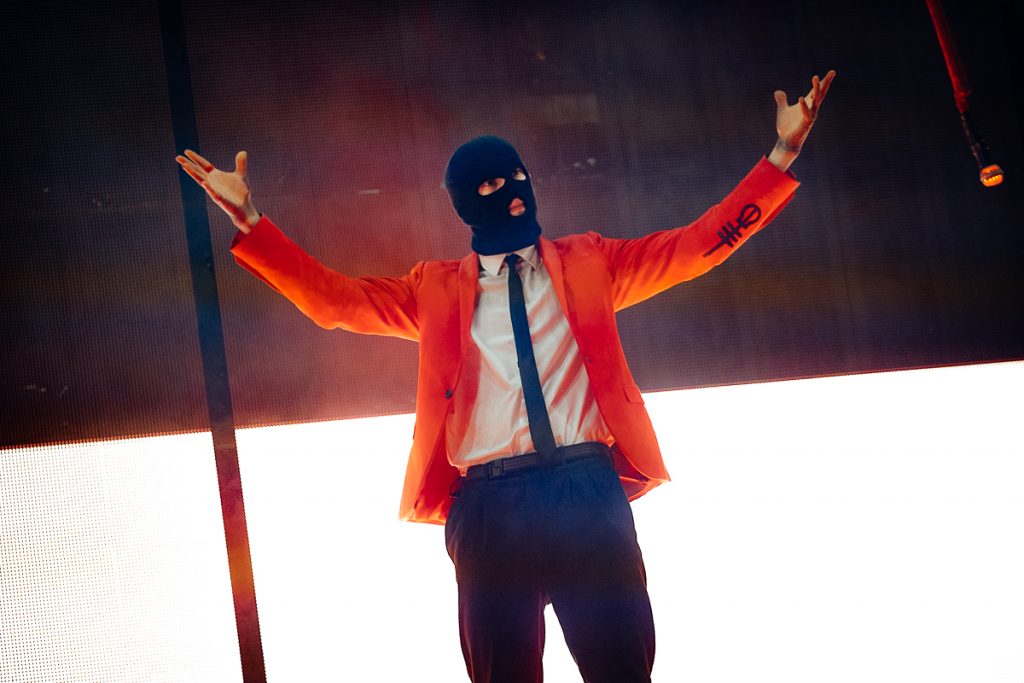 SAP Center was sparking with anticipation and energy as the packed house of predominantly late teens and early twenty somethings (and most of those female), along with a number of tweens accompanied by parents, all took their seats early to make sure they did not miss a second of the action. 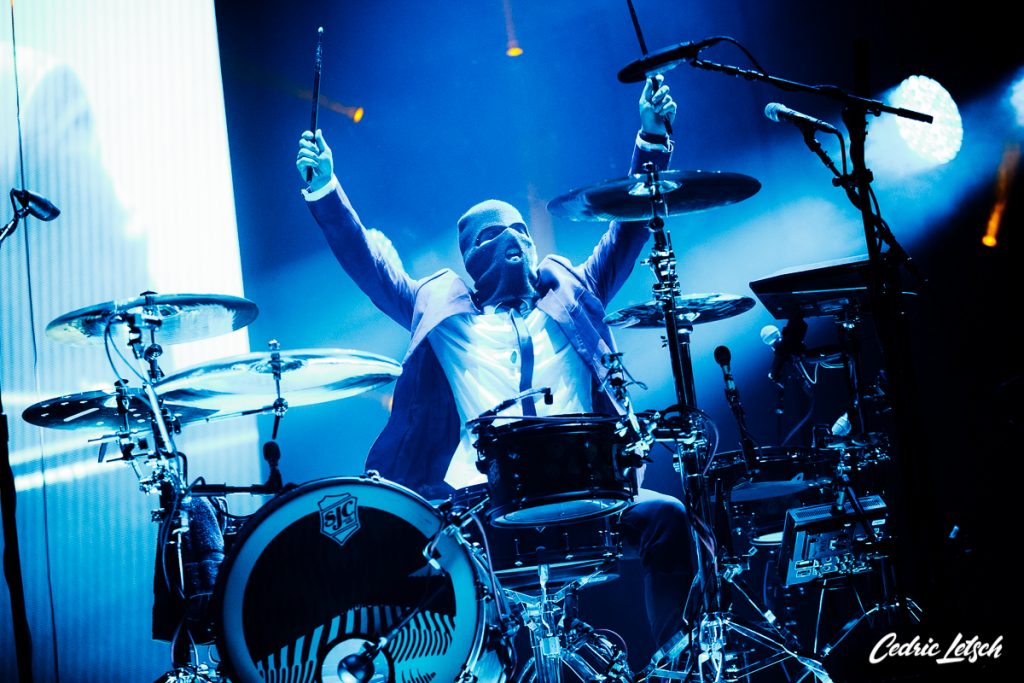 And the action would be fast and furious when Twenty One Pilots, who were nominated for 3 Grammys (taking home Best Pop Duo / Group Performance), began what would be a two-hour set with an explosive version of their current single ‘Heavydirtysoul,’ the lead track form their most recent studio album Blurryface. 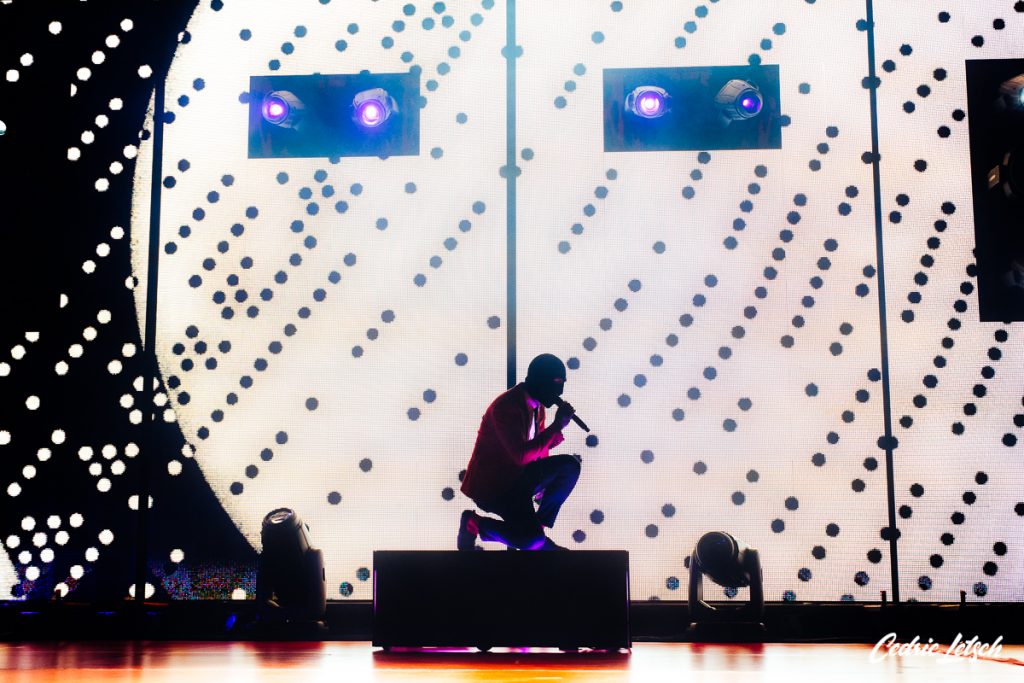 Appearing in sport coats with ties and their faces covered by stocking cap masks (as they often do), vocalist / multi-instrumentalist Tyler Joseph and drummer Josh Dun (the Columbus, OH duo comprising TOP) had the crowd out of their seats and chanting the lyrics as they ran through the continuous tempo changes of ‘Heavydirtysoul.’ 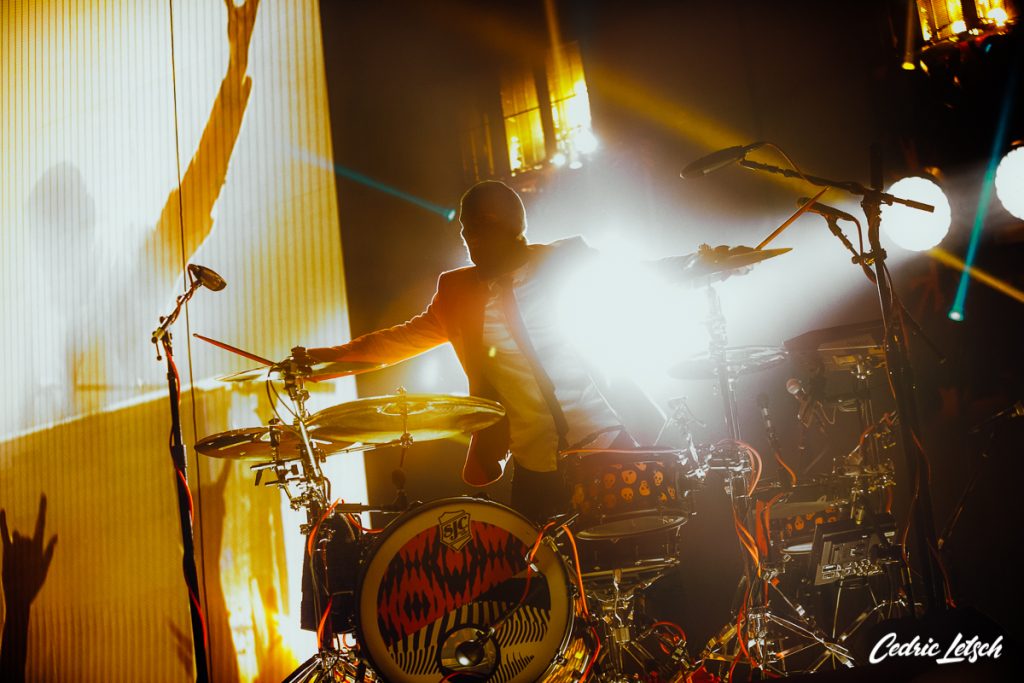 This first song encapsulated the wide range of influences that TOP fluidly stitches together. They have strong ties to the dark edged electronic underground-alternative sounds of Nine Inch Nails and Prodigy, but deliver their songs with unique overtones of dancehall reggae and hip hop that makes it difficult to pull them into one genre. The frantic drum work of Dun alternating between a driving drum and bass quickness and a half-time hip-hop bounce supported Joseph’s brilliant showmanship. In complete command of his vocal delivery and stage presence, Joseph lit the place up dancing around with a swagger that is at the same time quirky and mesmerizing. The crowd went ballistic, erupting with a high pitched euphoria that equates to witnessing a game changing act. 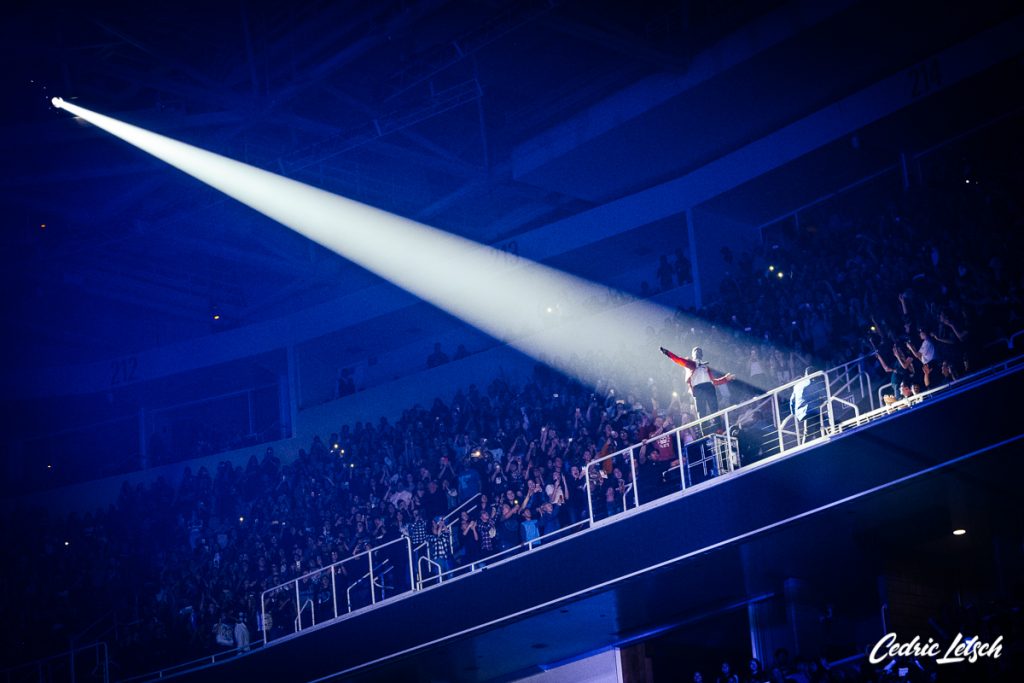 TOP is a band that is easy to root for, and this was apparent when they played a video chronicling their rise as a band, playing to small house parties and venues that were much more empty than not. Hard to imagine that given where they have now arrived. They seem like regular kids you might see at the skate park, only they have dropped in on a ramp that will take them much higher than most. 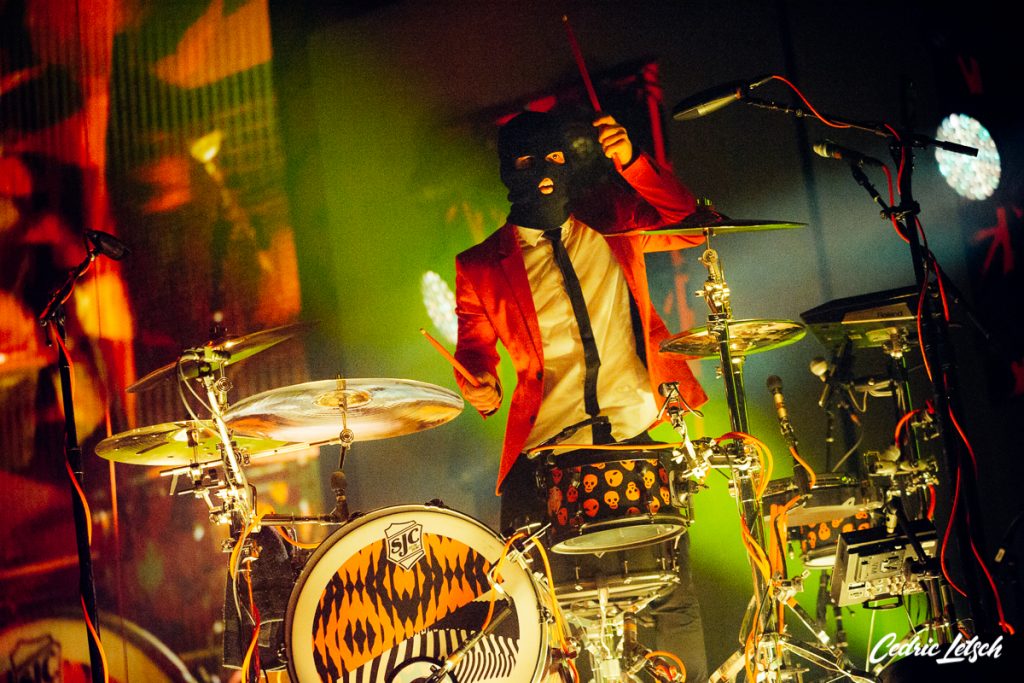 When Joseph went off stage and came back wearing cheesy sunglasses and a flowing floral print shirt that he claimed was his dad’s ‘least favorite outfit’, the fans knew what was up next. With a ukulele in hand, Joseph started into ‘Screen,’ which prompted a huge singalong as he strummed and crooned to the crowd. Transitioning into ‘Judge’ the backyard party vibe just built, but that party soon transformed into a sweaty dancehall. ‘Lane Boy,’ highlighted by Dun’s fast paced animated drumming spiraled up and broke, unleashing a frenetic rave inspired release of energy. 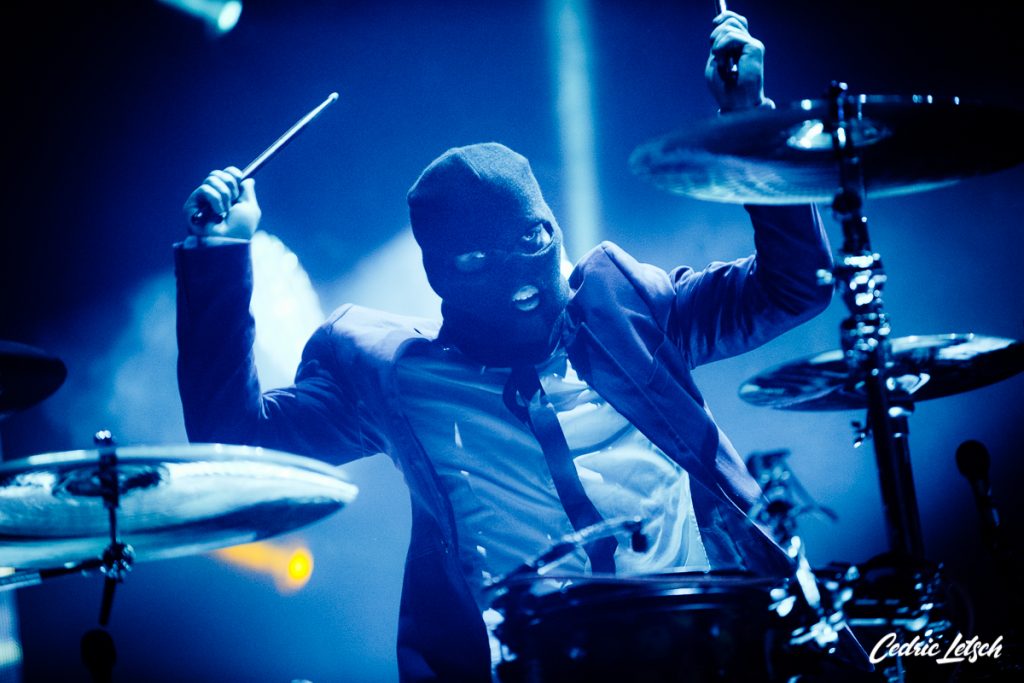 Purists may have a hard time with the fact that TOP uses a lot of drum triggered back tracks to execute their songs. At times Joseph may start by playing a bass or keyboard phrase that gets looped over backing tracks that are not played onstage. The thing is, that they do this about as masterfully as a duo could to produce so much driving sound. They play at the crossroads of live performance and leveraging technology as an instrument. Quite a feat that they could do so effortlessly and at such a high level for the entire set. Honestly, it is something that will take time for purists to get used to. 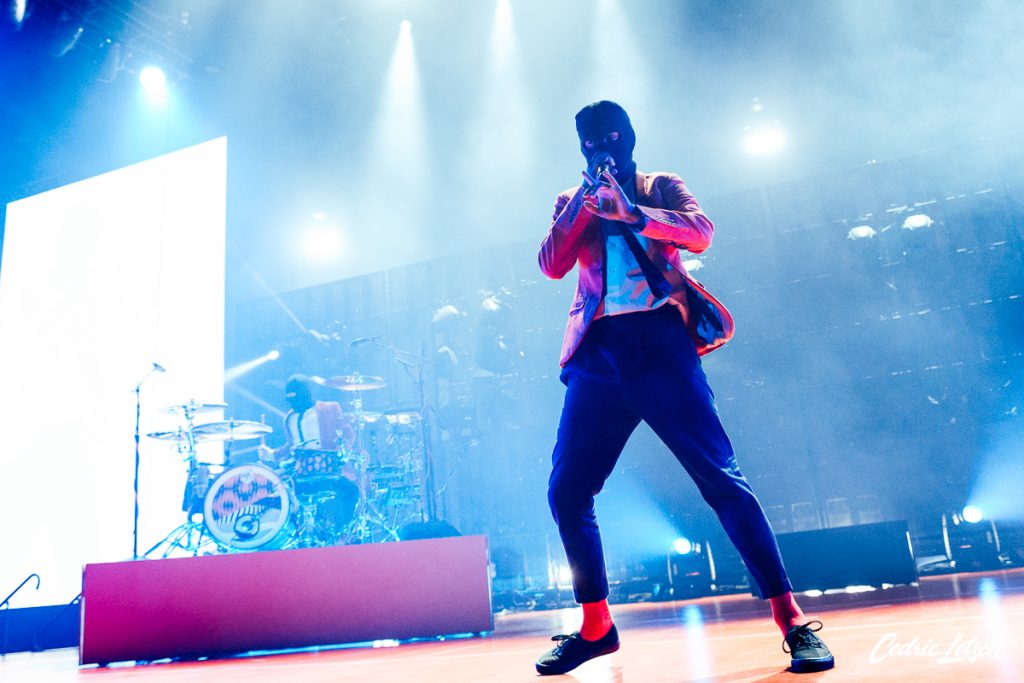 TOP kept things fresh through a number of methods that made the cavernous SAP Center seem more like an intimate club. They performed a few songs (including a My Chemical Romance cover) from an auxiliary stage set up toward the back of the floor….flipping the perspective so that fans toward the back were now up close and personal. They also had a segment of the set that ran through a series of covers and included collaboration with both opening acts Judah the Lion and Jon Bellion. Though playing covers can be seen as a crutch, the way these were done came across as more fun loving and indicated some of the influences of TOP….they are definitely born of the 90s. 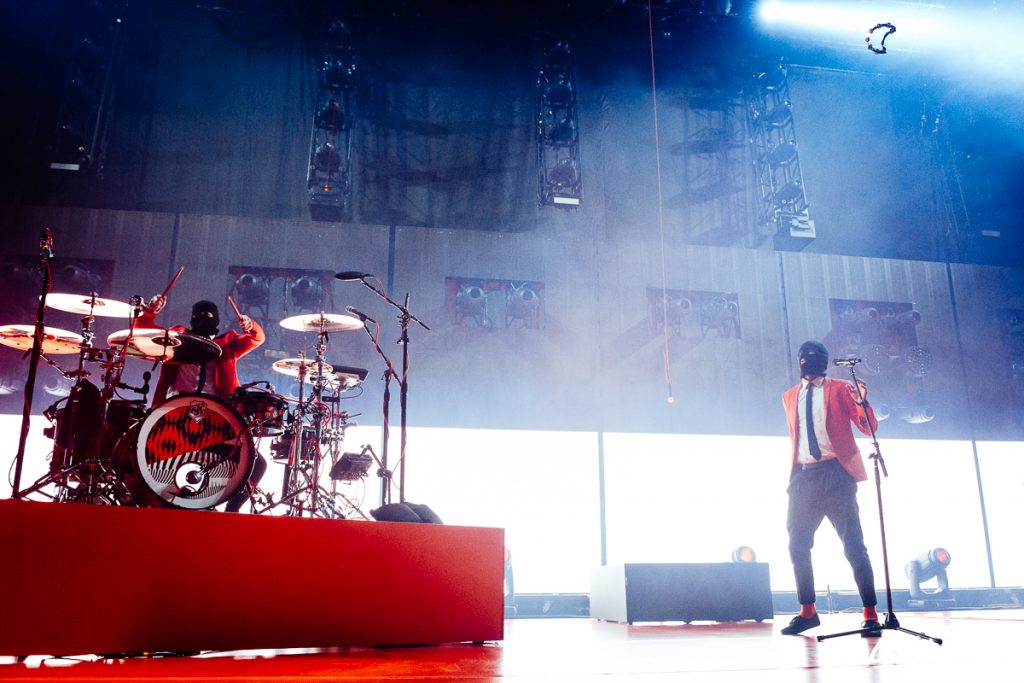 From ‘Tub Thumping’ to ‘No Diggity’ and ‘Where is the Love’ to a rousing version of ‘Jump Around,’ the presentation with the whole cast of bands was more fun loving and did not take itself too seriously. The homage to the 90s even came complete with a quick break in the set for a Mario Cart competition on the big screen. The energy of the set never waned, keeping at an electric pace that plateaued with the TOP hit ‘Stressed Out,’ and went over the top during ‘Guns For Hands’ in which Tyler Joseph seemed like he entered a video game. He got into a transparent plastic hamster ball and actually propelled himself over the outstretched hands of fans on the floor, circling around the crowd before returning to the stage. 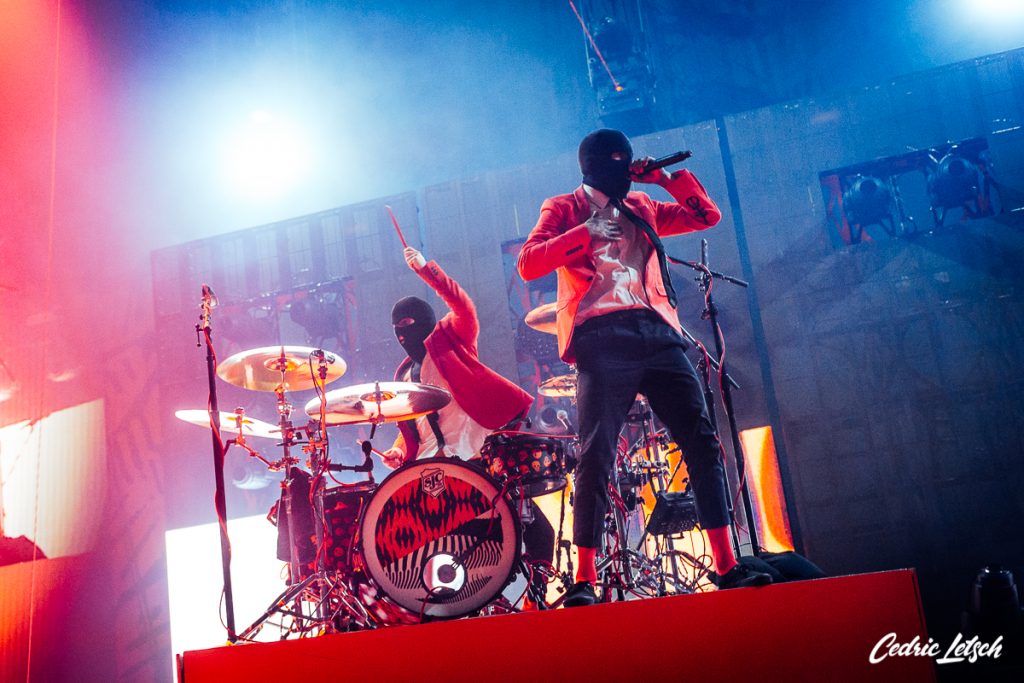 There is often debate over who of the latest generation of musical artists actually pushes the envelope and breaks new ground. An argument can be made that Twenty One Pilots is one of those bands. Even before they took home a Grammy, that point had been made with the inspired material they have released. Like Green Day, this band is poised to show they have more depth to their art than just a flash from the skate park.

(Chumbawamba cover) | No Diggity (Blackstreet cover) | Where Is the Love? (The Black Eyed Peas cover) | Jump Around (House of Pain cover) | Ride | Stressed Out | Guns for Hands (Tyler in hamster ball) | Tear in My Heart | Car Radio | | Goner | Trees

For more information about Twenty One Pilots, see their website.