Whatever it is you might imagine when you hear the words “rebel fighters” and “refugee camps,” surely it is no match for the actual experience of Tinariwen, the Grammy-winning Tuareg-Berber nomads from the Saharan Desert. With their striking traditional attire and intricate guitar work, the group played to a sold-out crowd in Berkeley recently. Their sound – characterized by multiple guitarists finger-picking in a manner not unlike fellow Malian Ali Farka Toure, and thematically similar to folk music and Islamic poetry – is in a class by itself and is accomplished enough to stand on its own. But as singularly mesmerizing as their music is – Robert Plant has said theirs is “the music I’d been looking for all my life” – and as painfully heartfelt as their lyrics are (well worth finding a translation), it is their incredible backstory that is truly remarkable. 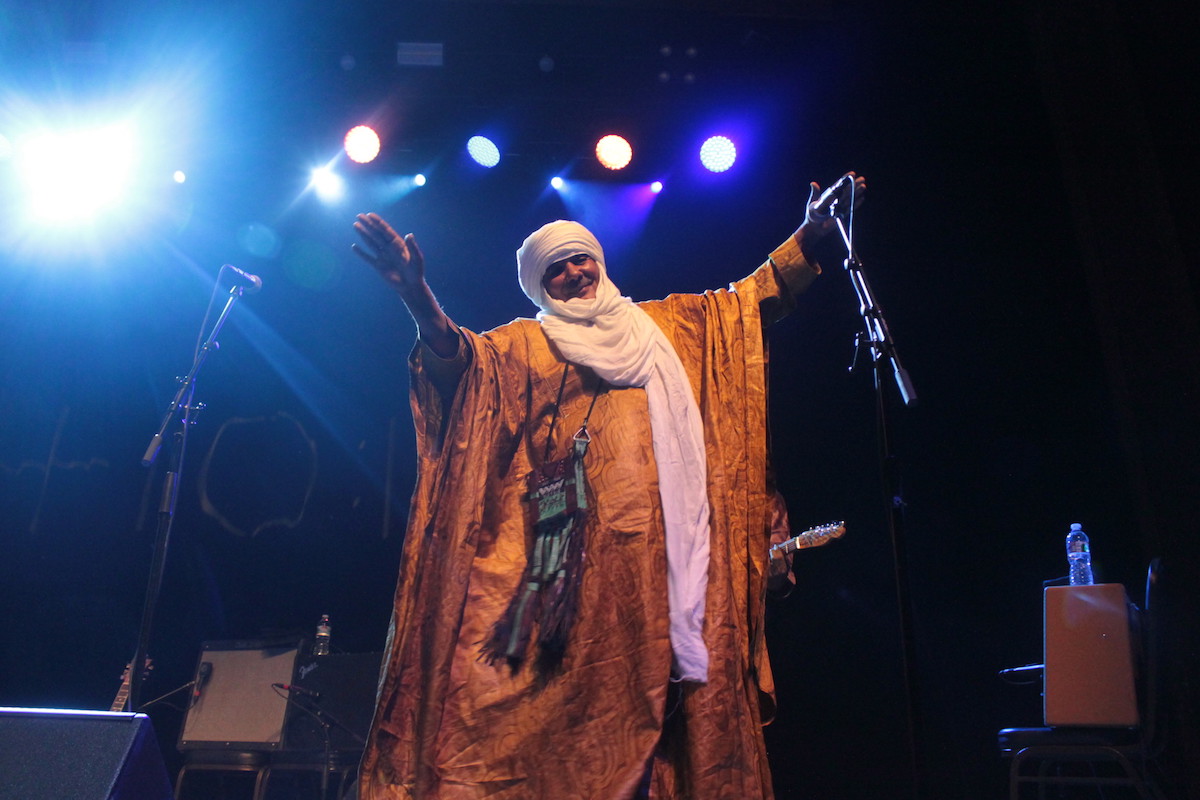 NPR calls Tinariwen “music’s true rebels,” and for good reason. Tinariwen was formed in 1979 amid extreme political turbulence. The three primary band members – founder Ibrahim Ag Alhabib, Hassan Ag Touhami and Inteyeden Ag Ableline – were teens living in exile in southern Algeria when they met and bonded over music and cigarettes. Like the majority of Tuareg youth of their generation, they were desperately poor, wandering and displaced from their traditional lands, their culture all but decimated. Together, they became rebel fighters, joining other Tuareg-Berber nomads who waged a decades-long fight against the Malian government that left them dispossessed of their lands. 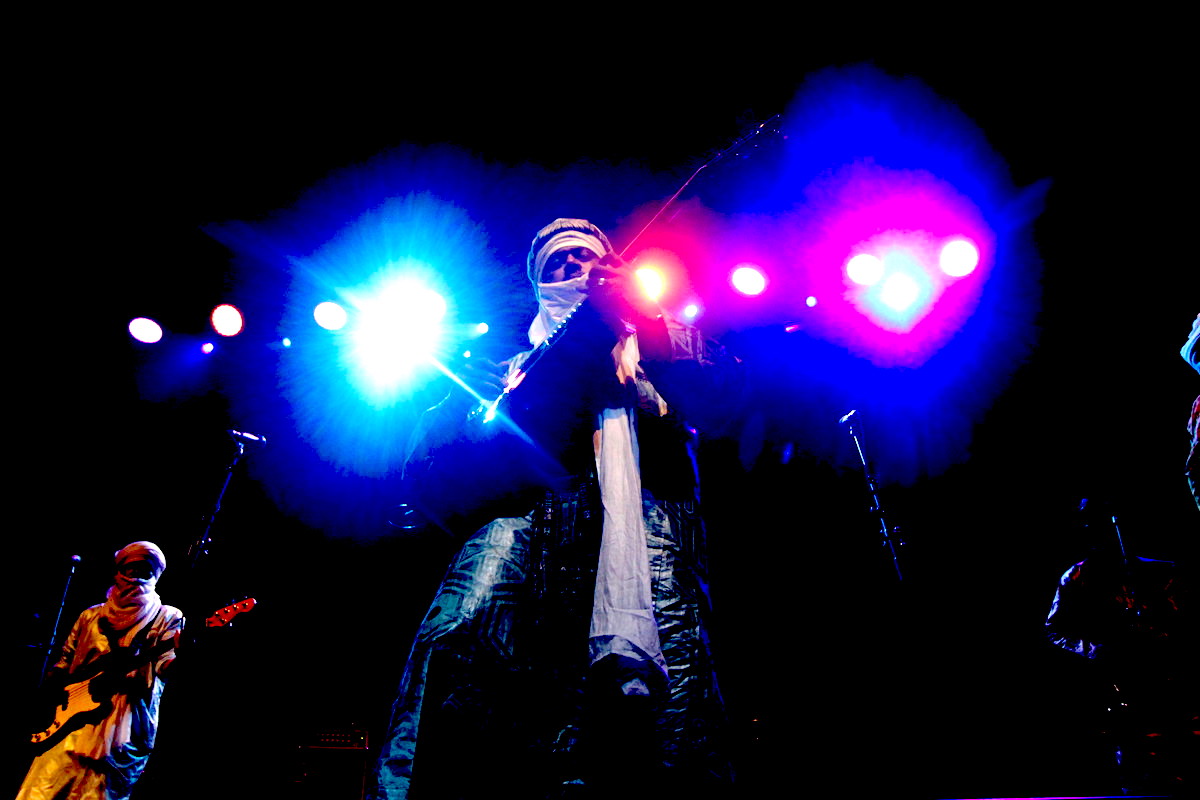 But their struggle began long before then. At age four, Ag Alhabib, the group’s founder, watched helplessly as the Malian army murdered his father, a rebel fighter, during a 1963 Tuareg uprising. He fled with his grandmother to Algeria, where he would grow up in refugee camps. Inspired by a cowboy in a Western movie he saw, he built his own guitar – out of a tin can, a stick and bicycle brake wire. He became a vagabond, passing the time in various refugee camps singing traditional Tuareg songs and radical chaabi protest music of Morocco combined with rebellious music from the West, drawn from Jimi Hendrix, Carlos Santana, and Bob Marley. Eventually, Ag Alhabib was gifted a proper guitar, which he played using generator-powered amps for the other exiled Tuaregs, some of whom would become band members. From these desperate and humble beginnings, Tinariwen was born. 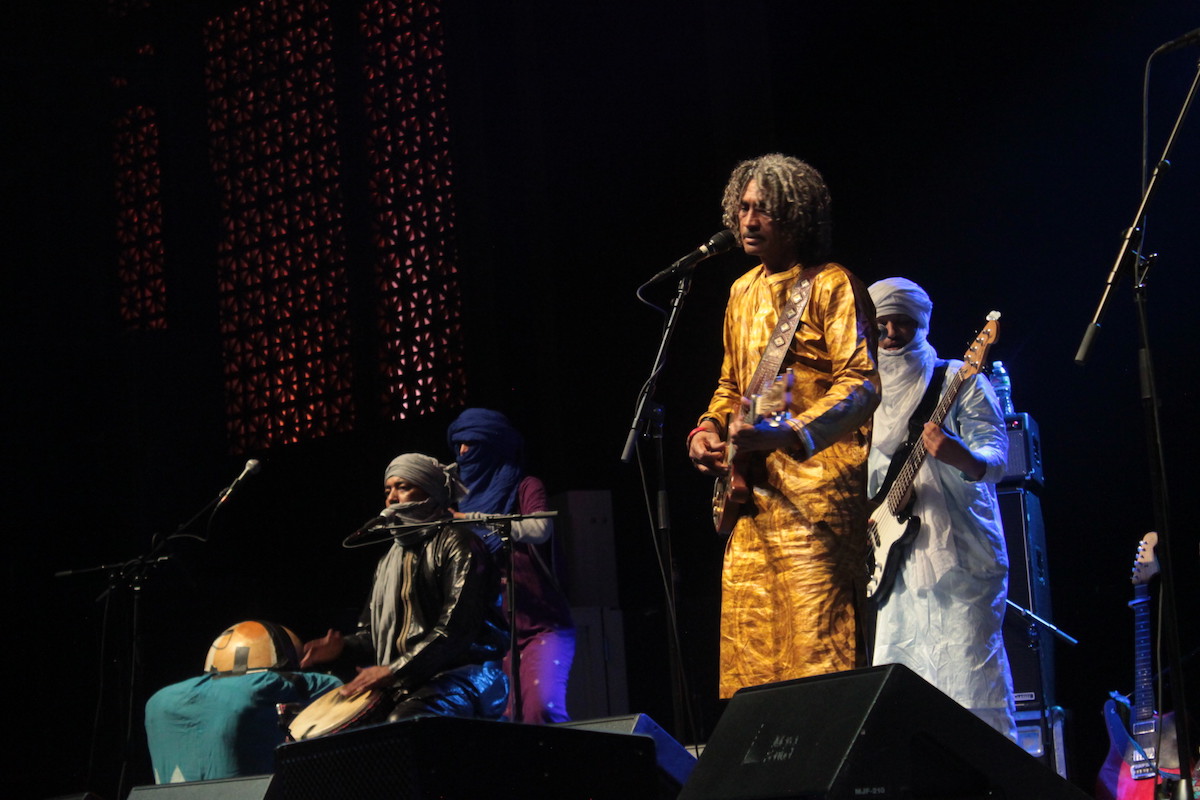 The following year in 1980, while still in exile with no homeland left to return to, the band’s three original members began developing their unique sound in Muammar al-Gaddafi‘s military camps in Libya. The dictator had invited all young Tuareg men who were living in the country illegally to receive military training. Although in reality, this was in furtherance of Gaddafi’s vision of a Pan-African army, the displaced young Tuaregs were told the training was in preparation for the creation of an autonomous Tuareg nation, a highly attractive prospect to the disaffected youth. Bassist Eyadou Ag Leche admits that, at the time, they didn’t know Gaddafi was “a crazy person, because we didn’t have any information in the desert.” In 1985, they responded to a similar call to arms put forth by leaders of the Tuareg rebel movement in Libya. There they met fellow musicians who would also become members of Tinariwen. 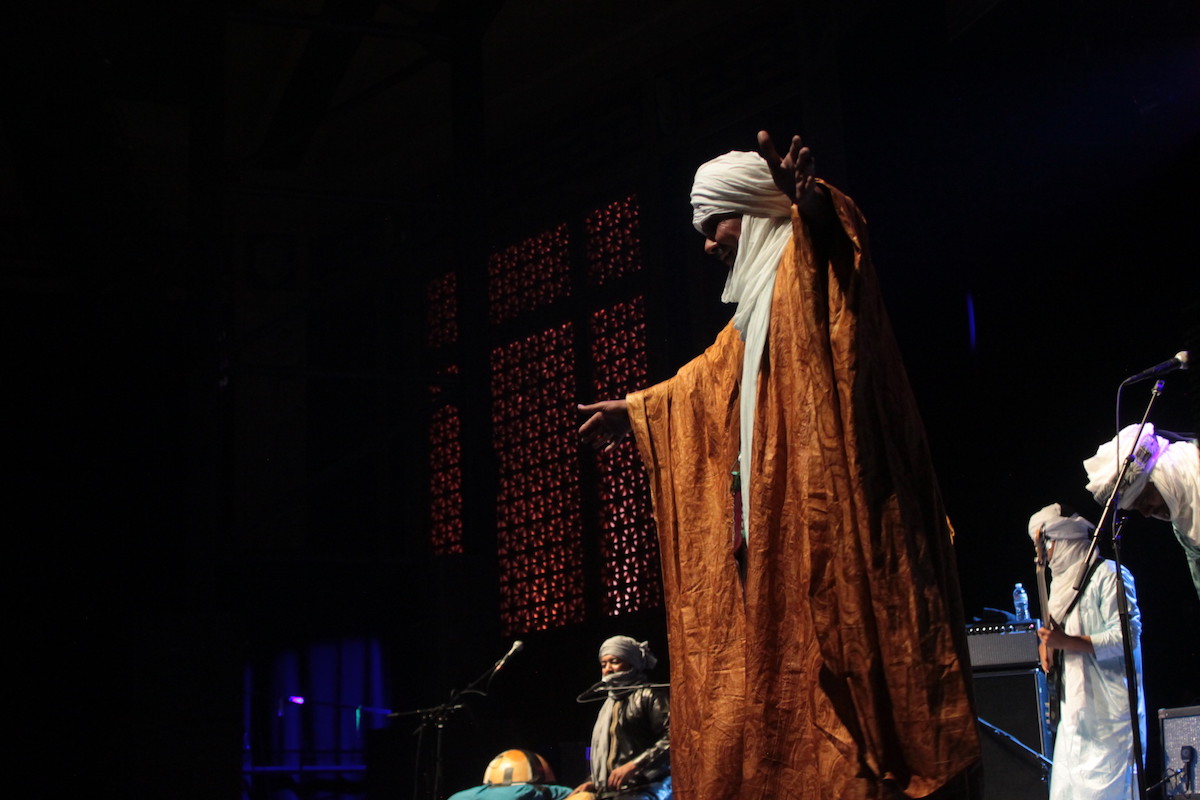 The band’s primary purpose was to write songs about issues relating to the Tuareg tribe, a people whose homelands spanned Libya to southern Algeria, Niger, Mali and Burkina Faso. They built a makeshift studio and vowed to give their music away for free to anyone who provided a blank cassette tape. These homemade cassettes spread throughout the Sahara region, and the band gained a following. At the time, they had no official name. Eventually, people came to call them Kel Tinariwen, which in their native Tamashek language loosely translates as “The Desert Boys.” With no Tamashek language newspapers, radio or television in existence, Tinariwen’s songs spoke directly to the Tuareg people in a way that nothing else did, bringing a message of camaraderie and hope, offering whispers of nostalgia and chronicling the painful exile, as in “Assuf d’Alwa (Longing and Loneliness)” from the 2011 album Tassili: “Longing, loneliness and despair / I am a prisoner of this time / In times of hardship, we share our suffering / As we share a glass of tea…” 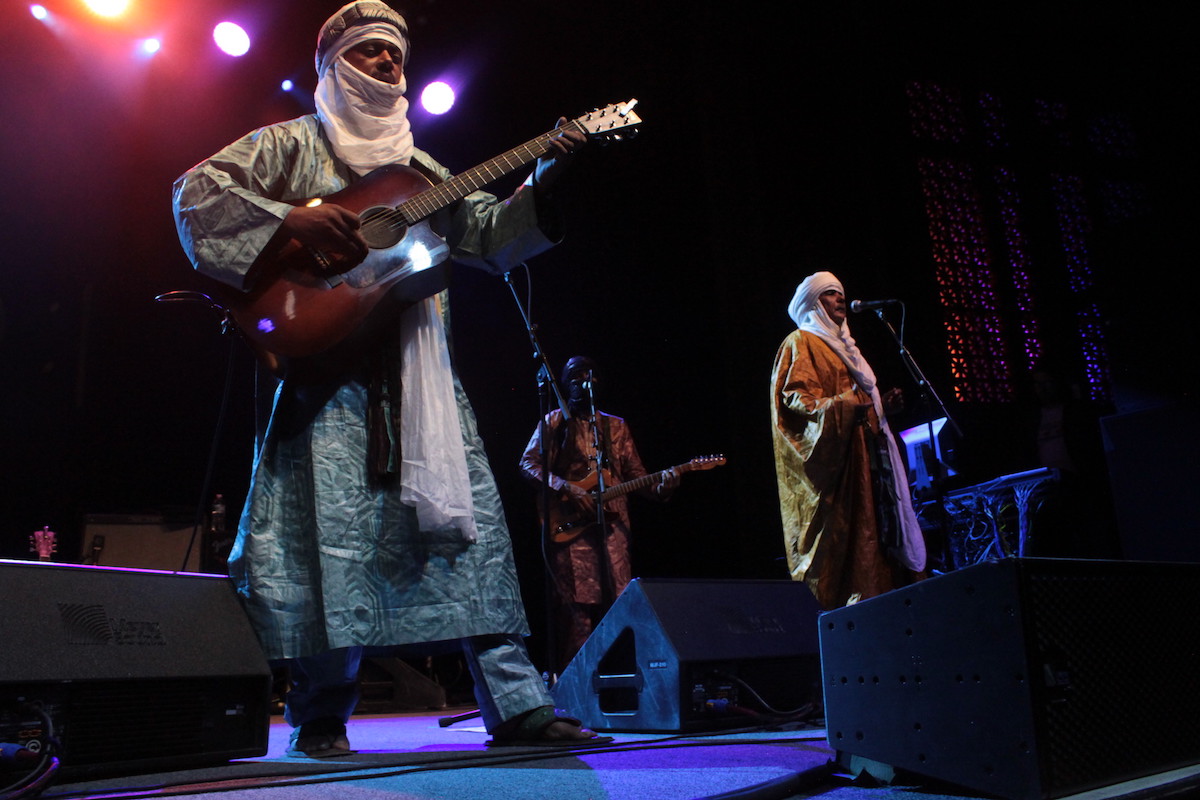 In 1990, Tinariwen moved to Ag Alhabib’s native Mali, where he returned to his home village for the first time in 26 years. There he would be a warrior again, fighting alongside other members of the band in another Tuareg uprising against the government. After a cease-fire and the subsequent peace agreement that was reached several months later, the musicians decided to lay down their weapons for good with the ambition of playing music full-time. 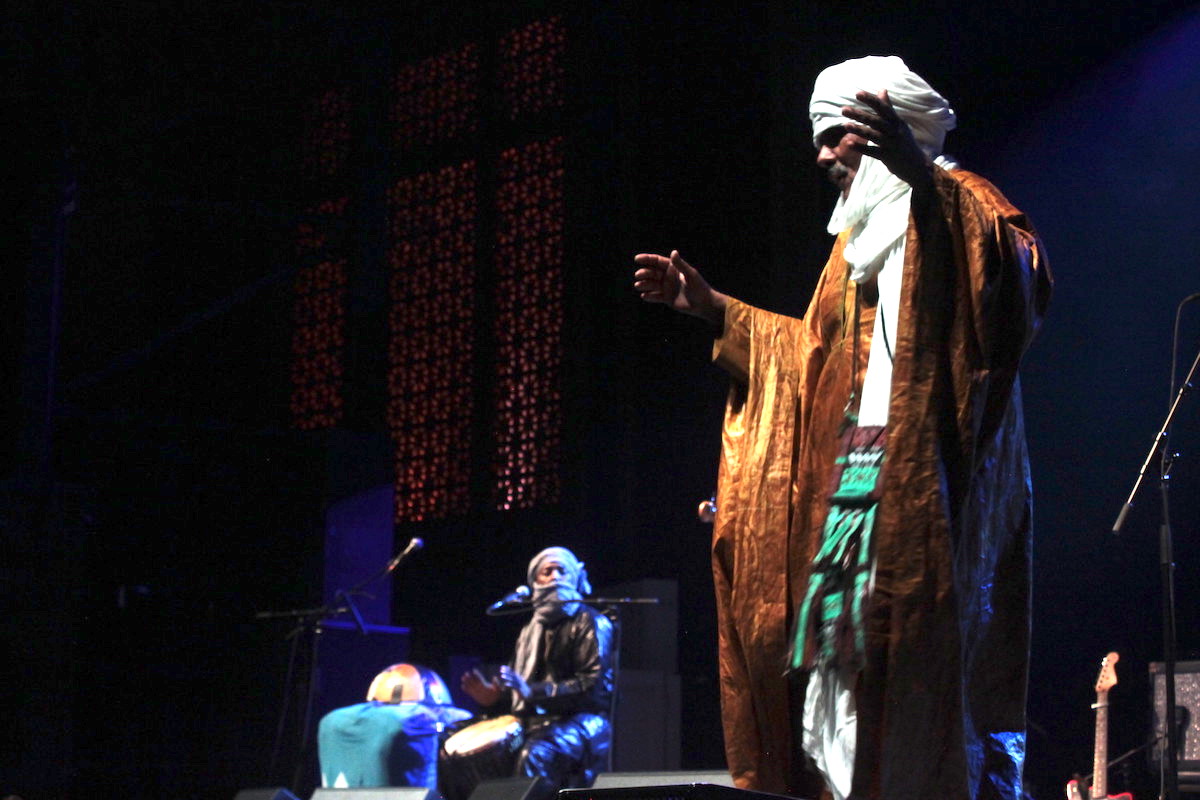 But the conflict wasn’t entirely behind them. In 2012, another party in the rebellion, a militant Islamist group, denounced secular music as satanic, demanding it be replaced with Quranic verses. Tinariwen was specifically targeted. While most band members managed to evade capture, Abdallah Ag Lamida was kidnapped while trying to save his guitars. During his weeks-long captivity, several members of Tinariwen fled from the conflict and resettled temporarily in California, where they recorded their sixth album, Emmaar, in another desert – this time, Joshua Tree (where their latest release, Elwan, was also recorded). Further illustrating that the struggle continued, the band had to tour in support of that album without leader Ag Alhabib, who was compelled to stay in Mali to deal with family issues brought on by yet another political crisis.

Indeed, because of the nomadic lifestyle of the Tuareg tribe, Tinariwen has always been a collective of musicians and singers who come together in various combinations to perform and record, as opportunity allows. Though several members tour regularly, their line-up has never been exactly the same. 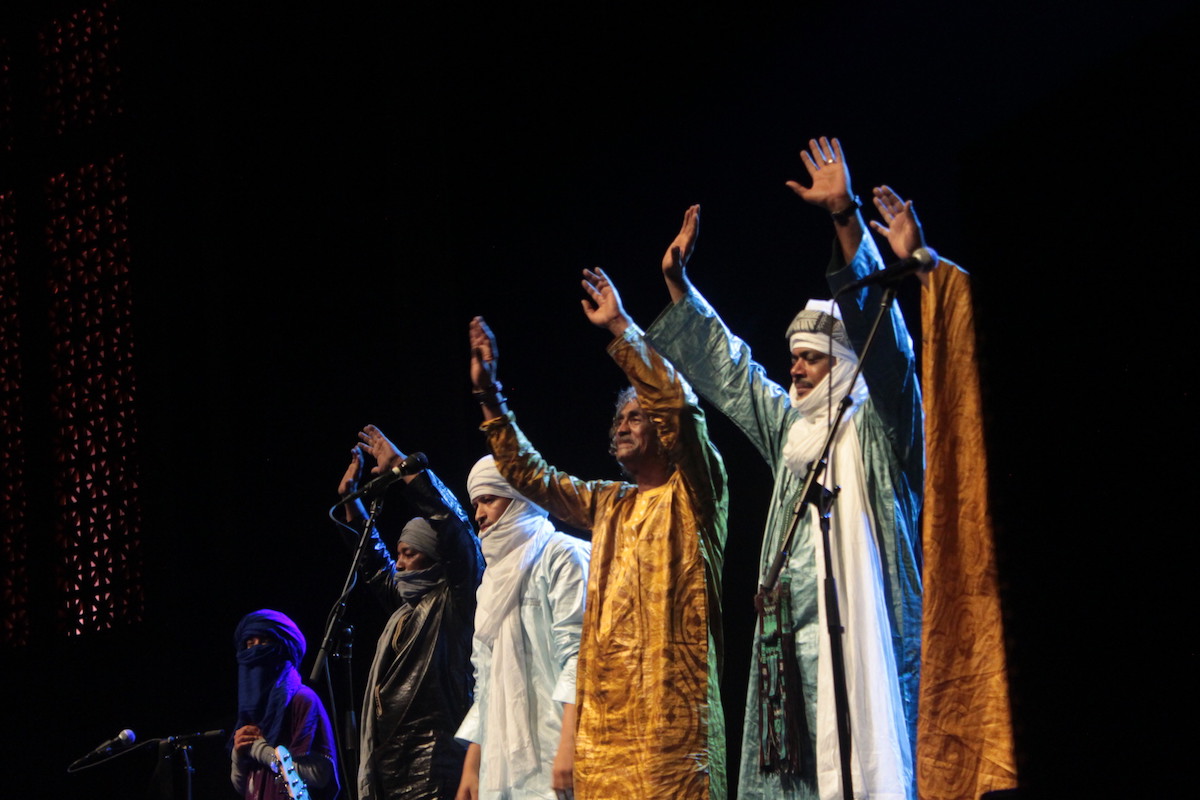 The show in Berkeley featured six members, including iconic founder Ag Alhabib, and their poignant performance cast a mesmerizing glow over the crowd. Never mind that the audience likely could not comprehend the Tamashek lyrics; the aching melancholy and triumphant jubilation spoke volumes, making it clear that while some songs, like “Djeredjere (At Rock Bottom),” told of unfathomable loss: “This year I’m at rock bottom… / Friendship has gone / Family has gone / Today we are hemmed in on all sides / The mountains here, the two rivers over there / And I see no escape,” still others spoke of the simple joys of desert life, as in “Sastanàqqàm (I Ask You)”: “Can you tell me of anything better / Than to have your friends and your mount / And a brand new goatskin… To find your way by the light / Of the four bright stars of heaven / To know how to find water / In the unlikeliest of places / And enlist the momentum of the wind / To help you move forward…”

Beyond the singing and immaculate guitar work, there was also much dancing and clapping. Taken as a whole it was transcendent, transporting the audience to the untamed elements of the Saharan desert. There was a palpable ephemeral feeling that lingered throughout their performance, like witnessing something mystical on a starry desert night, something to be appreciated in the moment, never to be captured and never to be repeated in quite the same way again; like a memory of a landscape that no longer exists, or the surreal awakening from a fading dream to which one can never return. And perhaps that is the emotion Tinariwen wants listeners to have – a way to relate to the longing they as displaced Tuaregs know all too well.

East Bay’s own Dirtwire got the crowd going with their unique style of psychedelic Americana played over danceable beats. Featuring David Satori of Beats Antique, Evan Fraser from The Dogon Lights and BOLO, and Mark Reveley of Jed and Lucia, Dirtwire is single-handedly making Americana great again.

Drawing on influences that span the globe – from Asia and Africa, to South America and the American South – these cowboys from space delivered a proper hipster hoedown and an electrifying live experience. Dressed in matching all-black mariachi outfits, Dirtwire conjured a sound that was at once reminiscent of sitting on the porch in the shade of a hot summer day, and dosing and dancing on the night of the Burn. They played a dizzying array of exotic instruments from all over the world, including  a kamale n’goni (African harp), a whamola (electric one-string bass), a guitarjo (guitar with a banjo body) sometimes played with a bow, Siberian Ghostcatcher (mouth bow), harmonica, trumpet, jaw harp and their own electric space fiddle, just to name a few, with the lyrics often hooted through a megaphone. Bridging worlds as they do with their eclectic instrumentation, Dirtwire was an unexpectedly, unpretentiously perfect choice to open for Tinariwen, and the Bay Area must consider itself truly lucky to count this trio among its local bands.