It felt like 1990 all over again at the Fillmore when the incredible line-up of Reverend Horton Heat and Fishbone took over the stage. Headliners Reverend Horton Heat delivered their unique blend of psychobilly/rockabilly music and brought an old school punk rock vibe to the venue. Although they started late, the three-piece band hit the ground running with their hits “Big Sky” and “Psychobilly Freakout.” The current line-up consists of Jim Heath on guitars and vocals, Jimbo Wallace on stand-up bass, and Arjuna Contreras (Brave Combo) on drums. They played a few more hits, “Five O Ford” and “Devil’s Chasing Me,” before Heath went into story that involved playing with the Mentors’ Jimbo Wallace, who performed at the show with some bloody fingers, and getting a record contract after that show. The crowd thinned out a little at this time as it was around 11pm when shows at The Fillmore usually end and the people taking public transportation had to catch the last trains. 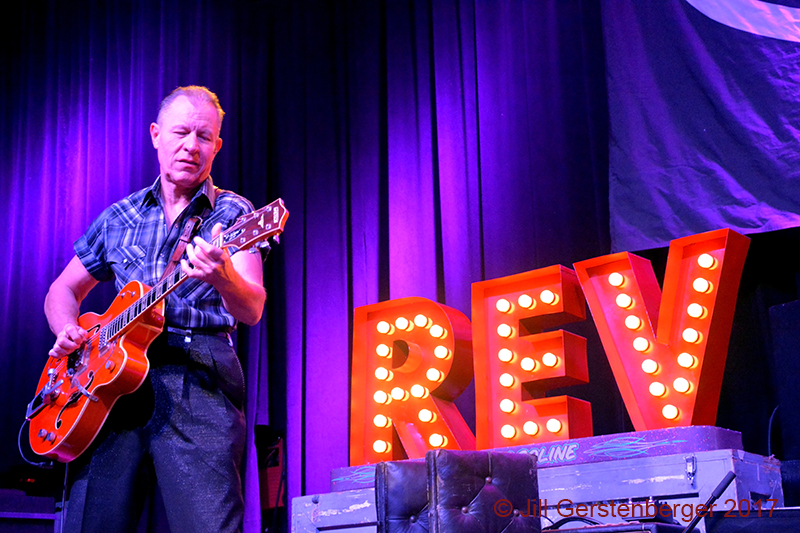 Everyone who stuck around was in for a big treat as the band got a second wind at this time. Matt Jordan joined the band onstage and played New Orleans style piano on a couple tunes. Then the band turned up the energy and started playing the psychobilly rock that their known for. A large pit formed in the crowd and it was old school style where people were dancing and spinning and helping each other up when someone lost their footing. 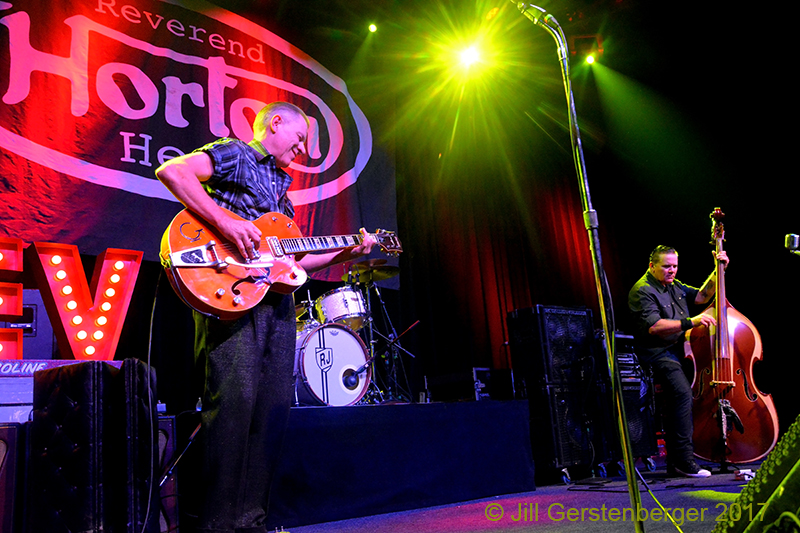 They played a couple more hits, “400 Bucks” and “Galaxy 500,” before they went in to a great cover version of Motorhead’s “Ace of Spades.” Everyone that was left in the club seemed to run towards the pit to get in on the action and it was the closest thing to a Motorhead show that we’ve seen since Lemmy’s passing. The band left the stage but returned for an encore with surprise guest Jello Biafra who sang a version of “House of the Rising Sun,” which had the remaining old punks in the crowd beaming with huge smiles on their faces. Biafra, the former lead singer of the San Francisco punk rock band the Dead Kennedys and founder of Alternative Tentacle Records, used to be a figurehead in the San Francisco punk scene but he doesn’t perform as often live anymore so it was a special treat to see him on stage here. 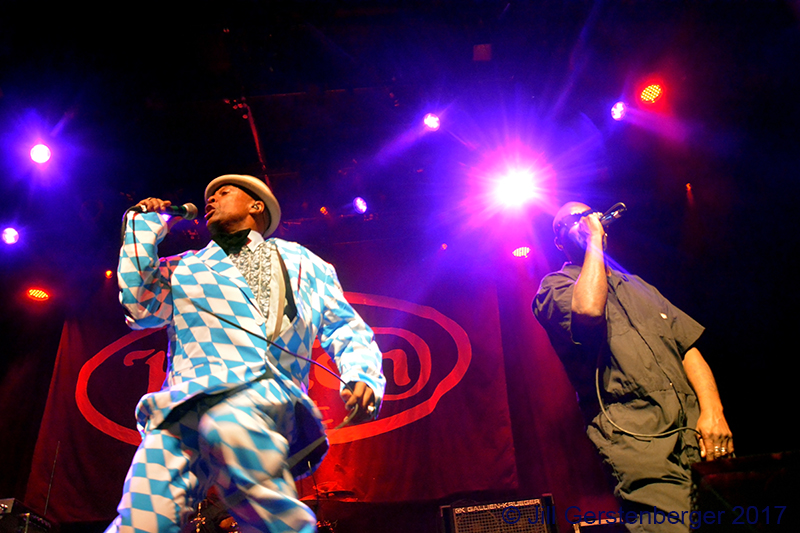 Opening for the Reverend Horton Heat was the phenomenal band Fishbone. Formed in Los Angeles, CA in 1979, the band uniquely blends ska, funk, soul, and hard rock, with terrific results, especially in a live show. The current lineup finds the return of some of the band’s original members performing together for the first time in 25 years according to their website. Fishbone consists of Angelo Moore on vocals, sax, theremin, John Norwood Fisher on bass and vocals, “Dirty” Walter A. Kibby II on trumpet and vocals, Phillip “Fish” Fisher on drums, John “JB” Bigham on guitar and keyboards, Rocky George on guitar, Jay Armant on trombone and vocals, and Paul Hampton on keyboards. 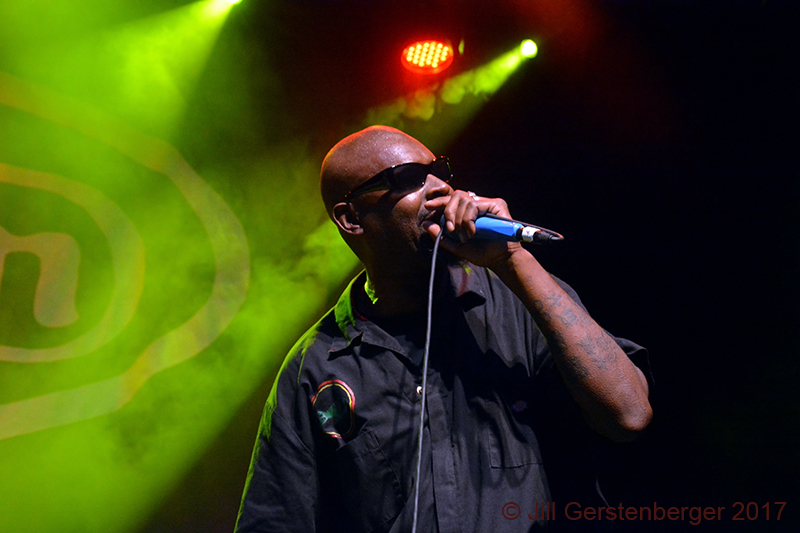 The band played a tight one hour set full of funk, dance moves, and horns. They resemble a wilder version of James Brown’s band the JB’s with some ska thrown in. Singer Angelo Moore is loaded with charisma and when he’s not singing and dancing he’s playing the saxophone or theremin. Their lyrics are often humorous and contain lots of social commentary. They played a few of their hits “Give It Up” and “Bonin” and then were joined briefly onstage by Fat Mike from NOFX during the song “Ma and Pa.” They finished their set with rousing versions of “Skankin’ to the Beat” and “Party at Ground Zero”. If you get the chance to see these guys live don’t miss them. They never disappoint. 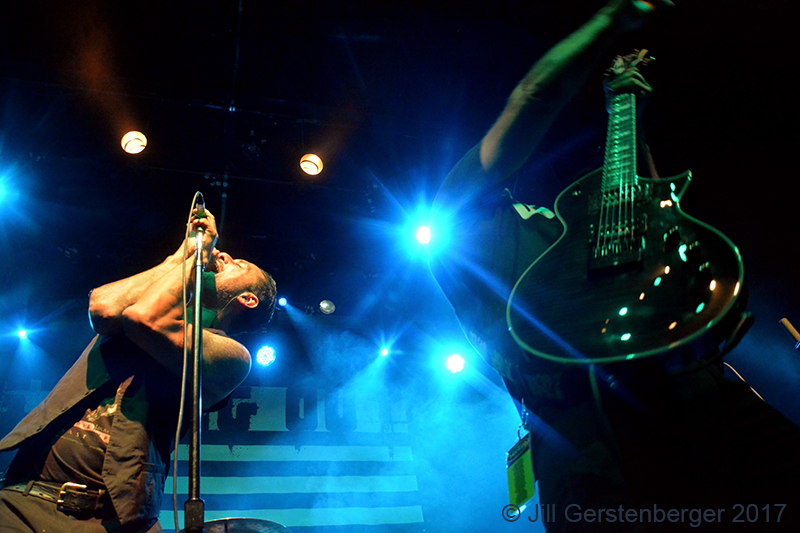 Playing second in the line-up was Strung Out from Simi Valley, which played a blend of punk and hard rock. Lead singer Jason Cruz resembled a young Mike Ness of Social Distortion and had a powerful voice and presence. The crowd was just starting to fill in during their set but really enjoyed Strung out and were forming a pit towards the end of their set. They are definitely worth catching if they come through San Francisco again. 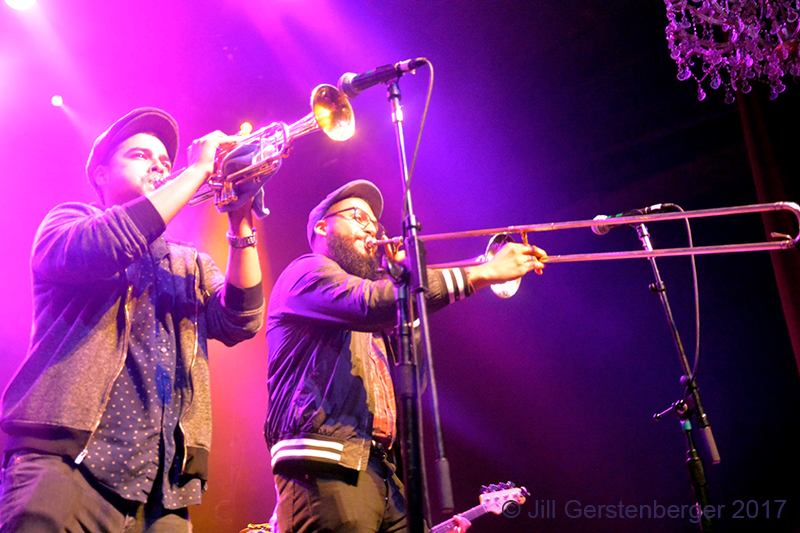 Opening for the whole show was ska/punk band Los Kung Fu Monkeys. Their members are from the US, Canada, and Mexico. Even though they had to play first when the crowd was pretty thin they gave it their all and were a fun band to watch. They had a horn section and lead singer Bang Bang had loads of energy and was getting the crowd pumped up. The band had downhome vibe and sang some songs in Spanish. They’ve been touring constantly for the past ten years opening for acts like The Misfits, Moby, Fishbone, and Madness. We’d really like to see them do a full set sometime so we’ll be keeping our eyes out for dates from them in the future. 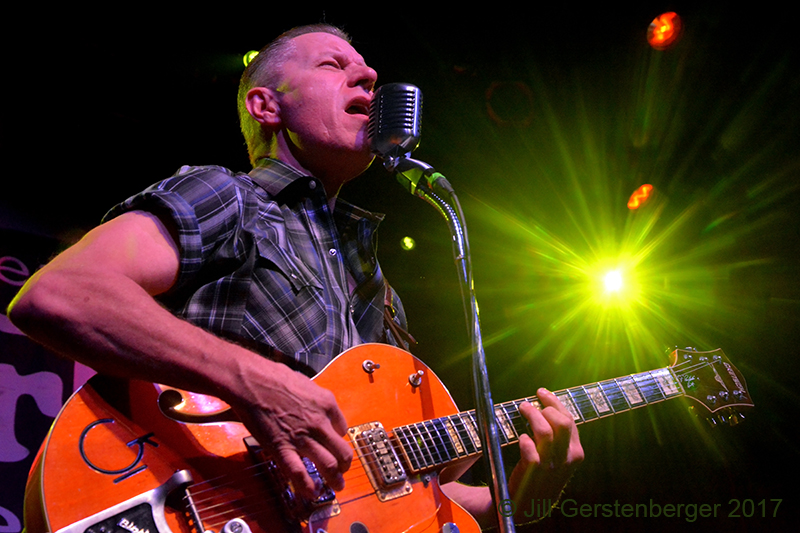 All in all it was a great night of music with lots of special guests. All four bands were fun and unique and they all complemented each other in their own way. Having the different genres was reminiscent of how shows used to be booked back in the day and the crowd had a feel-good vibe which made it all the more enjoyable. This line-up has a few more dates traveling through the Midwest of the US and is worth seeing if you’re out that way. Catch them while you can!

Here’s a slideshow with more photos by Jill Gerstenberger of all four bands:

Find out more about Reverend Horton Heat on his website.

Get more info on Fishbone here.

Setlist: Everyday | Rebellion of the Snakes | The Animal and the Machine | Too Close to See | Blueprint of the Fall | Bring Out Your Dead | Soulmate | Solitaire | Never Speak Again | Cemetery | Matchbook

Get all the dirt on Lost Kung Fu Monkeys on their Facebook page.