A sold-out crowd stood still, and thousands of wide eyes watched musical prodigy Thom Yorke grace Bill Graham Civic Auditorium’s stage. Standing behind an electric piano, his fingers slowly slid across the keys. Leaning into the mic, his haunting voice gripped you from the start. 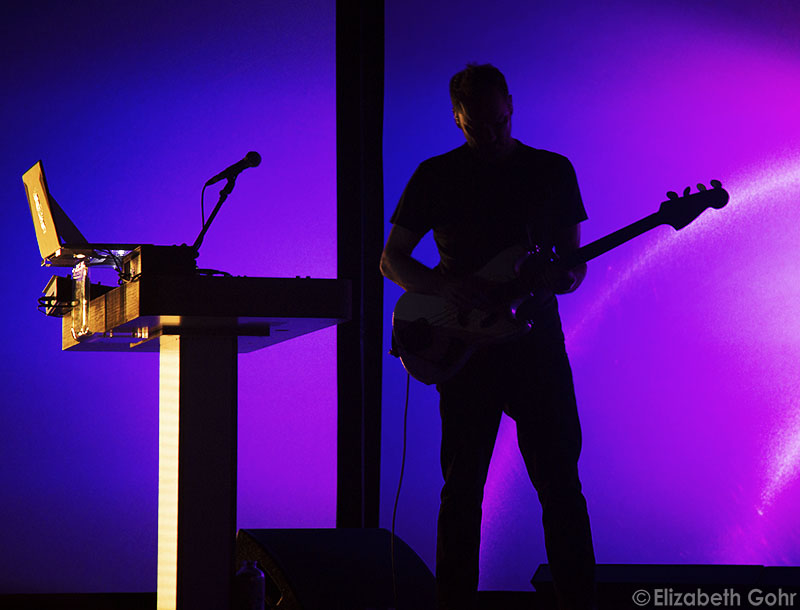 Opening with “Interference” (Tomorrow’s Modern Boxes, 2014), he softly sang, “I don’t have the right / to interfere / to interfere.” Oh, but Mr. Yorke, please do. His voice pressed us to move closer. And one by one, fans freely fell down his rabbit hole of noise. 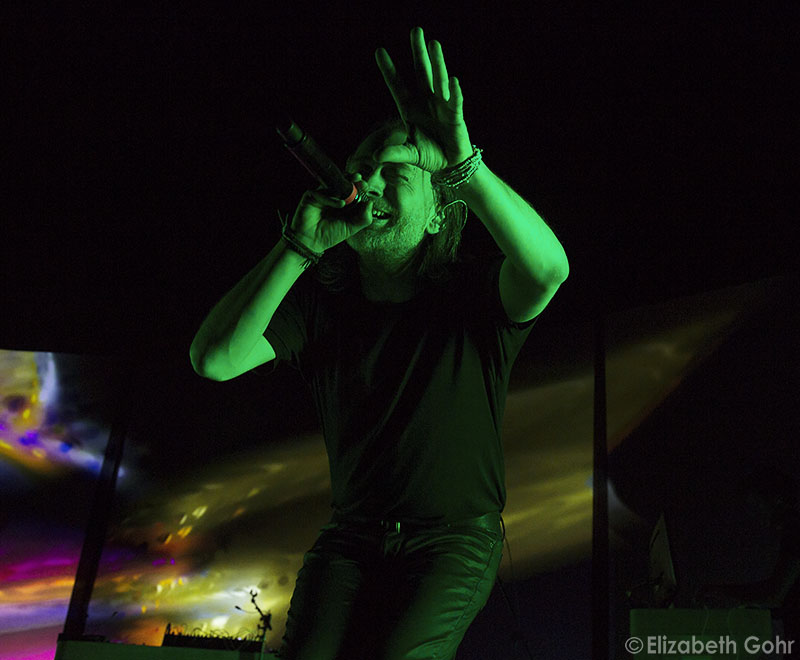 By the time he started playing “A Brain in a Bottle,” a hypnotic beat sprung off the stage and latched onto the crowd. Bodies involuntarily throbbed; feet moved to the beat; necks jolted forward. Yorke danced across the stage — his small hips jittered back and forth as his arms swam through the air above his head. And just like that, everyone was in Yorke’s beautiful biosphere, committed to experiencing this high together. 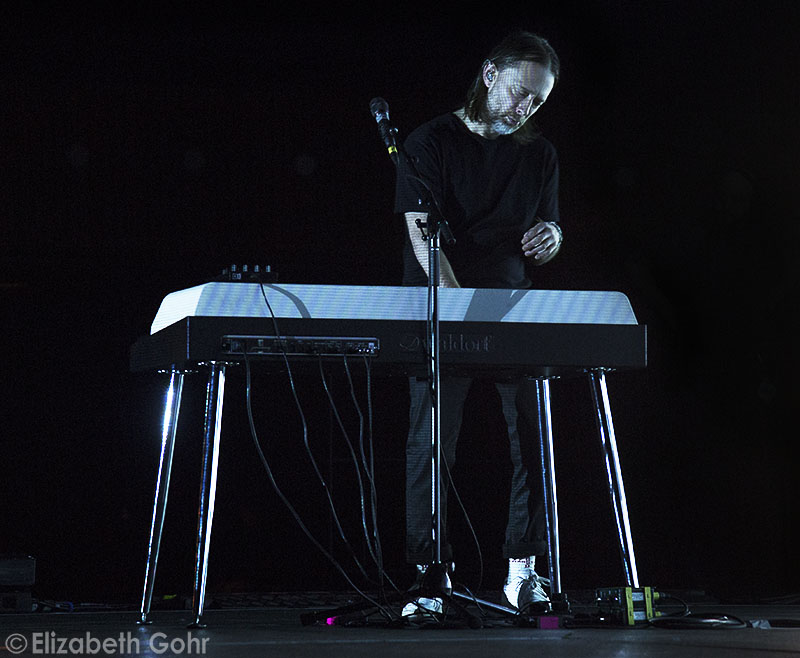 Yorke summons a euphoric storm — sometimes ominous, sometimes heavenly. He has an impeccable knack for imagery, and offers so much more than literal narrative. His abstract lyrics are open to interpretation, but it’s his angelic voice that reaches the depths of your soul. 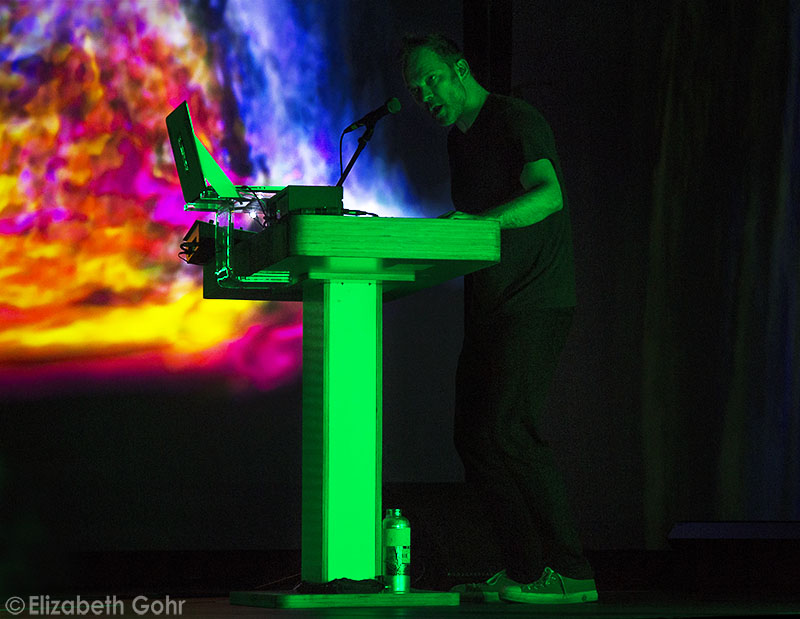 An array of laptops, knobs, pedals, and gadgets were assembled upon three small programming stations. Tarik Barri, a Dutch audio-visual master who has worked with Yorke since 2013, stood at one table and projected his vibrant art. Nigel Godrich, who has produced every Radiohead album since Ok Computer, took turns managing some of the digital equipment while Yorke played just about everything, sometimes taking long breaks to wail over the crowd and dance. 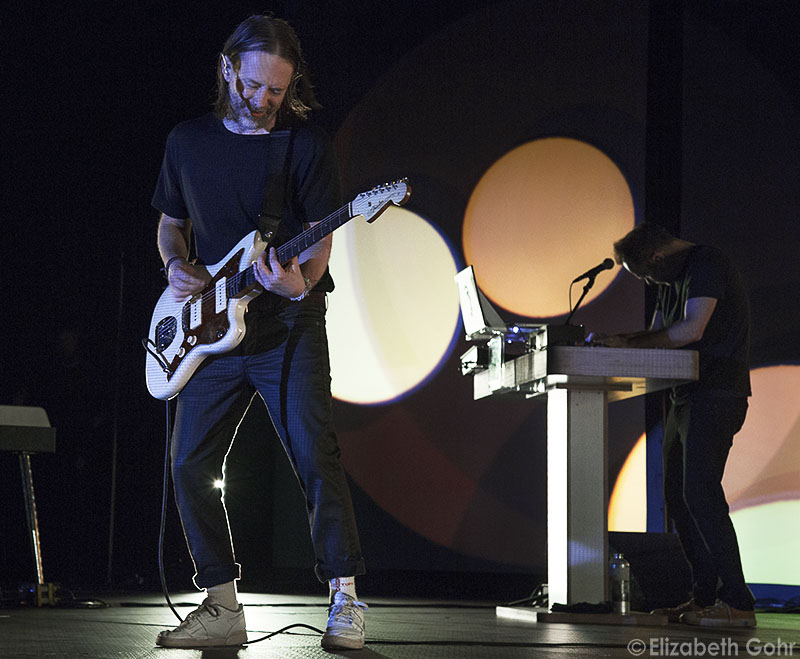 The English native became an international icon as the frontman of Radiohead. The band has released nine studio albums — 1997’s OK Computer was named best album of the past 25 years by Q magazine. However, Yorke’s Radiohead-adjacent projects have further proven his artistic genius. 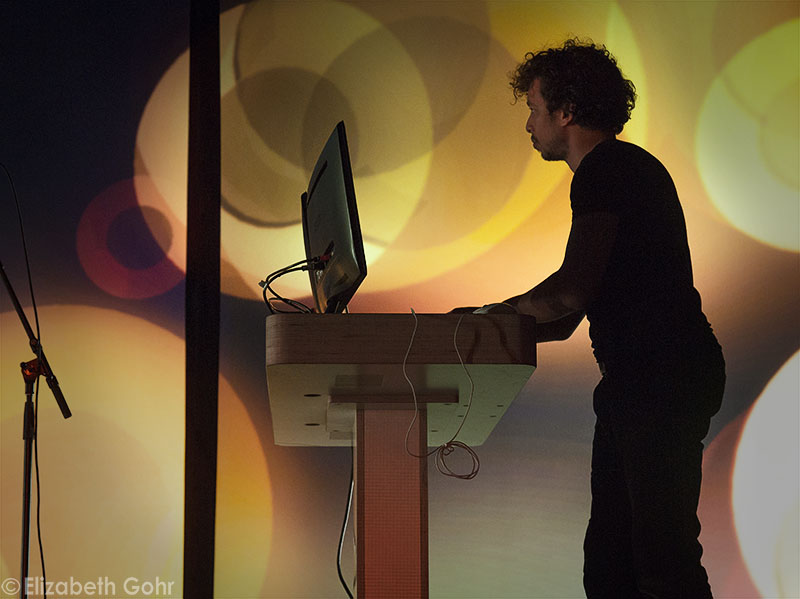 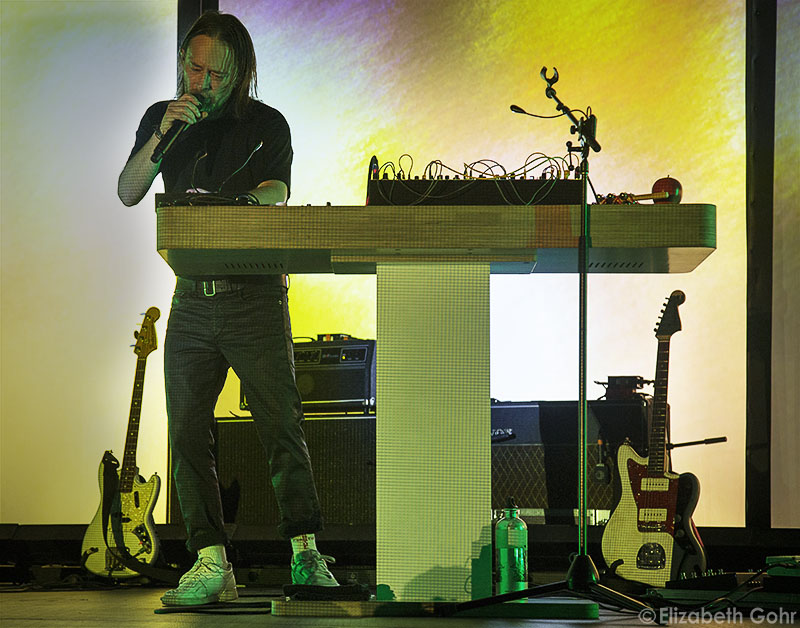 You won’t hear any Radiohead songs at a Thom Yorke gig, but you might indulge in a bit of the band’s flavor here and there. “Black Swan” (Eraser) could have easily complemented In Rainbows. And some of his electronic-heavy tracks remind you of the good ol’ days of Kid A. 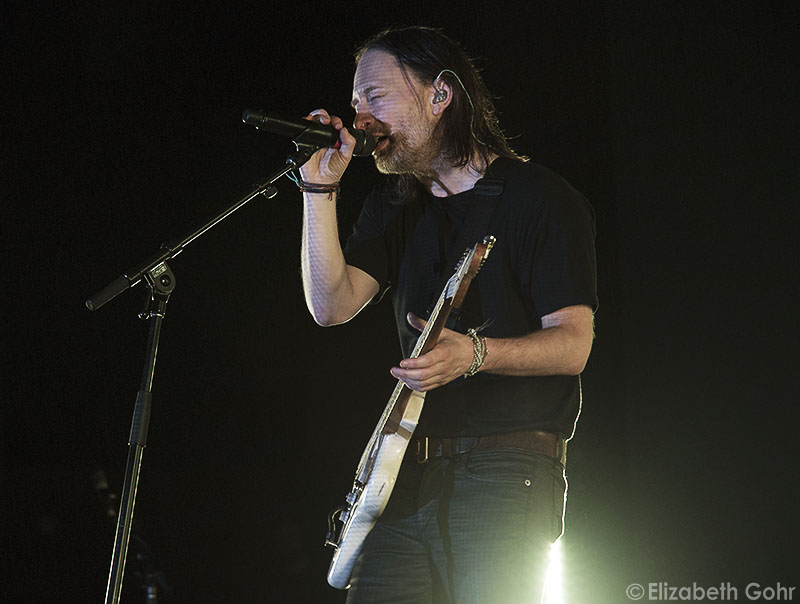 His most powerfully provocative number, “Default” (AMOK, 2013), came at the end of his encore. Shapes of all colors chaotically swirled as Yorke twitched and clutched his mic. Possessed by the spastic imagery, the crowd watched the shapes blend into each other. 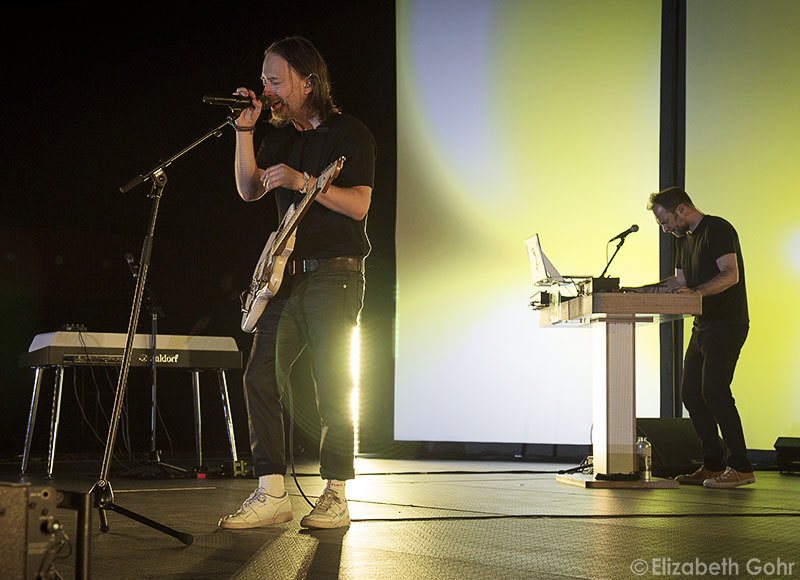 The textured beat, both rough and smooth, was layered with echoing reverb. Building, building, building. People’s pupils throbbed. Stinging synths stunned the crowd still. Delicate vibrations crawled up your skin as Yorke’s falsetto croon hovered and embraced everyone in the room. 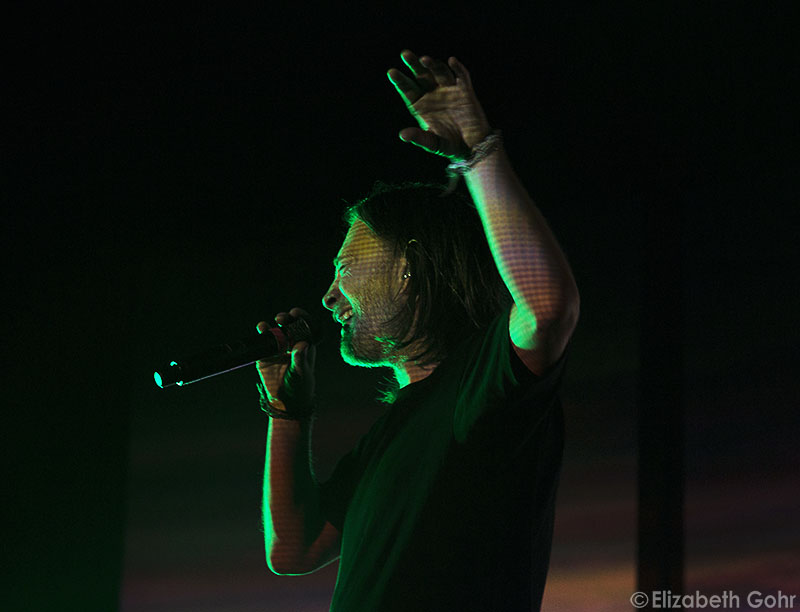 But the night wasn’t over. After leaving the stage for the second time, thousands of fans turned on their phones’ flashlights and held up lighters, cheering for one more song. The longer the room remained dim, the louder they got. Yorke reemerged from the side of the stage and sat behind his electronic piano. A spotlight shone upon his frame; his shadow moved before a panel of illuminated purple screens. 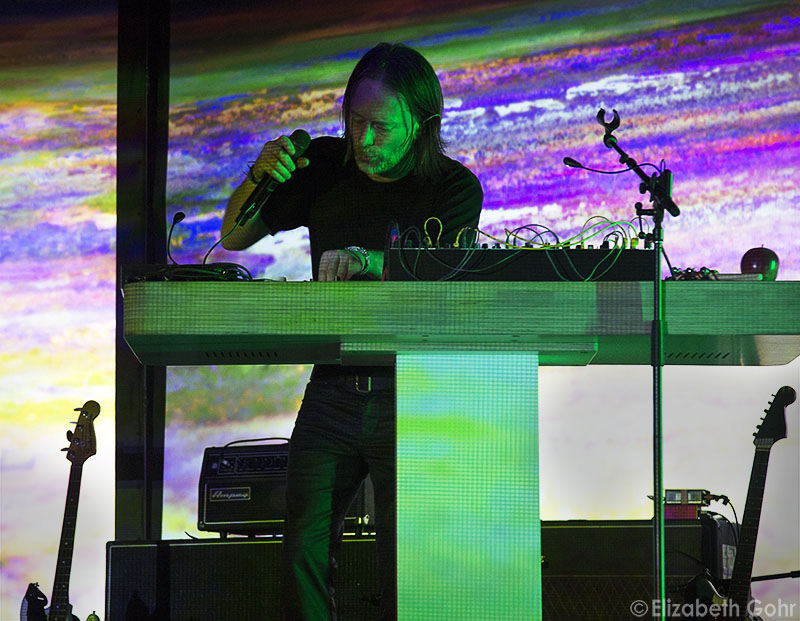 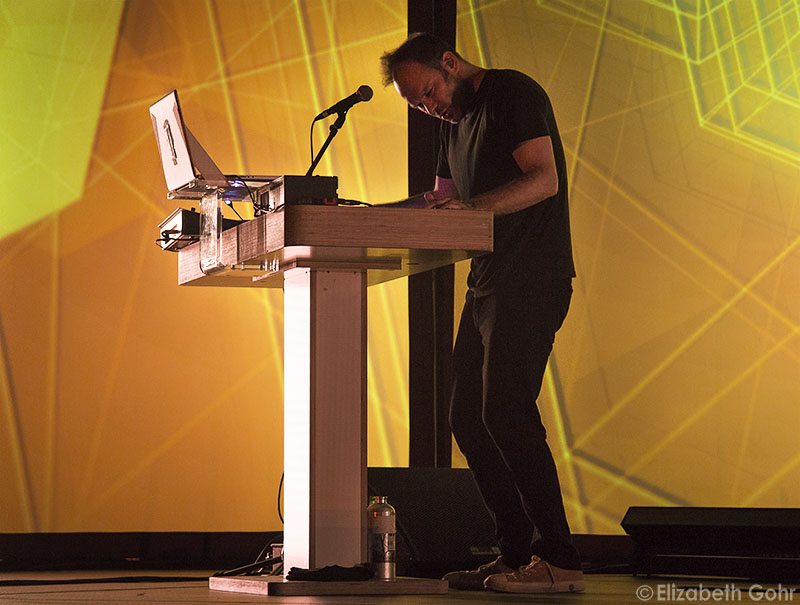 The simple piano melody paired beautifully with sounds reminiscent of a choir. It was angelic and eerie all the same time. Tears rolled down a woman’s cheek. People sat, resting their chins in their palms. Others stood motionless, in awe. And then he bid adieu.

Opener Oliver Coates started the night with his cello. The film composer played a slew of atmospheric and brooding songs, admittingly playing whatever came to mind in the moment. Sometimes dark, Coates utilized a lot of loops and a computer with pre-recorded vocals and instrumentation to take the audience into unknown territory.