With beautiful shrouds of fog rolling into Nob Hill on the last weekend before Halloween, Thievery Corporation played the last show of their five-week tour at the Masonic in San Francisco. A grand old concert hall that has had its interior upgraded from the traditional red carpeted seated theatre-in-the-round to a spacious multi-use rock venue, the setting both outside and inside was a appropriate backdrop for the multi-faceted, style-encompassing outfit from Washington DC. 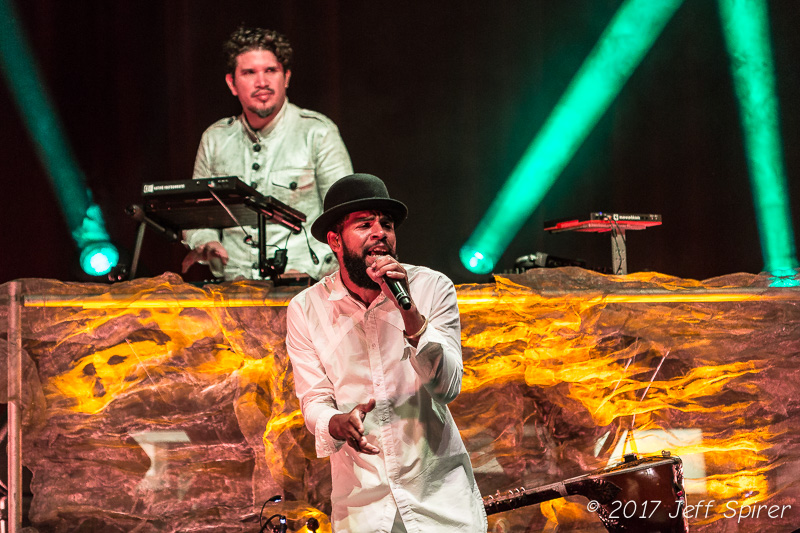 Having started in 1995 as a live cooperative wrapped around the musical interests of DC DJs Rob Garza and Eric Hilton, the outfit has been at the forefront of their genre which combined world rhythms, EDM, hip-hop, and jazz that has seen the group release eight records, sell out big venues, and encompassed collaboration with folks like David Byrne, Perry Farrell, and The Flaming Lips, all without having hits in the traditional way and also all being released on their own label. 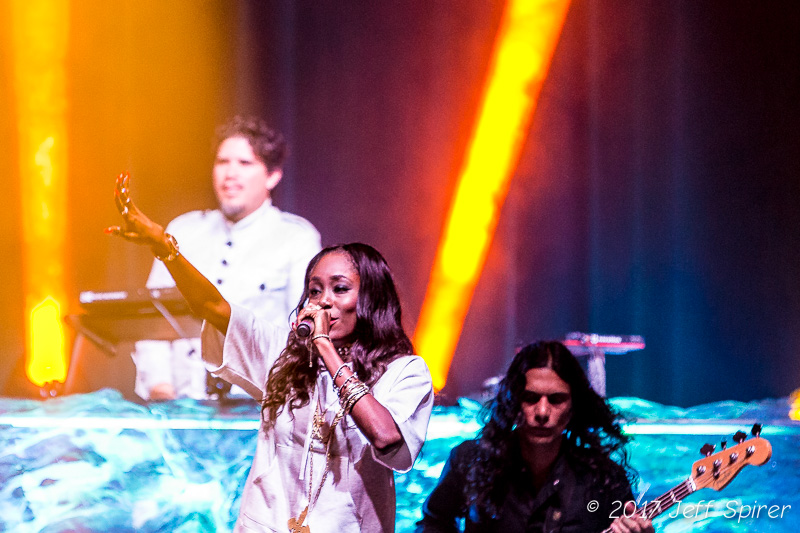 This time around saw a leaner touring outfit without the horn section or co-founder Hilton;l on board were a roster of singers consisting of mostly veteran singers with the exception of new vocalist Raquel Jones. 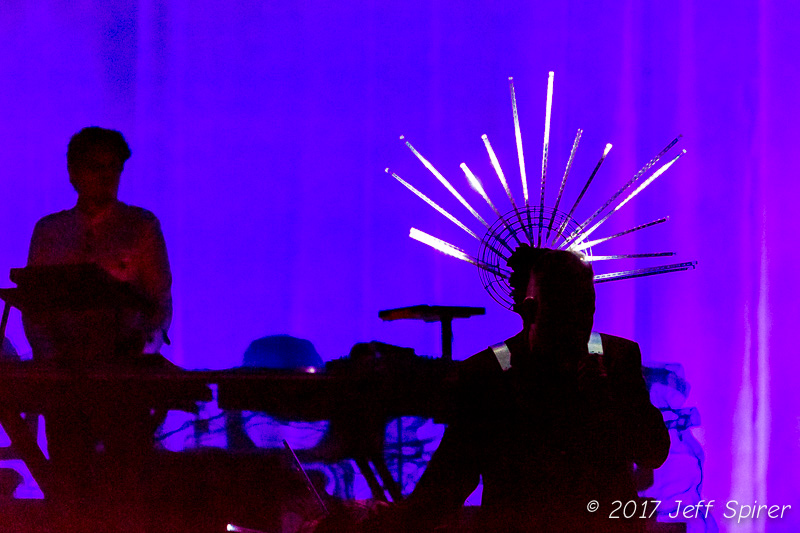 The set started in the dark with “Marching the Hate Machines” from their critically acclaimed The Cosmic Game LP. The vocals which were performed by Wayne Coyne on the record were done by percussionist Frank Orall who wore a light emitting scaffolding on this back as well as brandishing a light emitting star shaped device. This visual surprise opened the show. The first eight songs pretty much defined the motifs that would be rotated throughout the rest of the 20 plus song two-hour night. 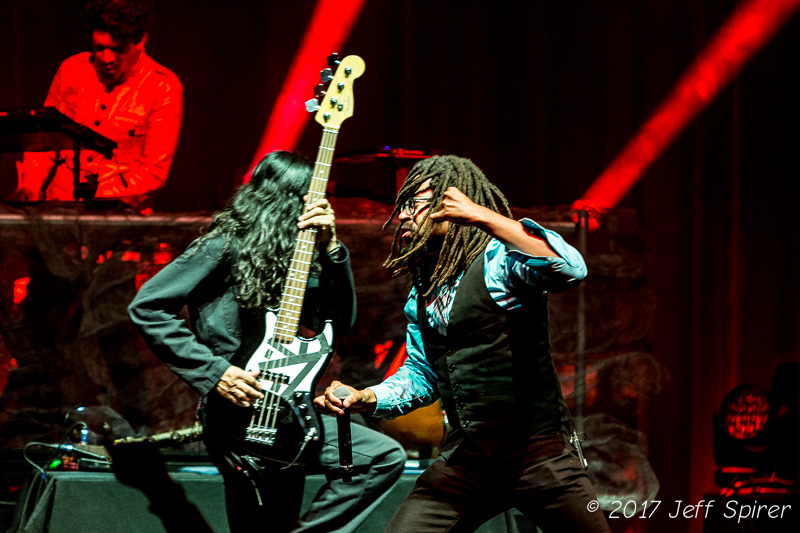 Prominent was singer Puma, who performed more songs than any of the other performers in his smooth mellifluous tenor; his specialty was the reggae based material. Seeing how their latest LP The Temple of I and I is reggae-themed, this made sense. In between the singers, the band would launch into one of their patented sitar powered instrumentals ably played by Rob Myers. These were clearly a crowd favorite with the audience, which by mid set had filled both the floor and upstairs of the Masonic. 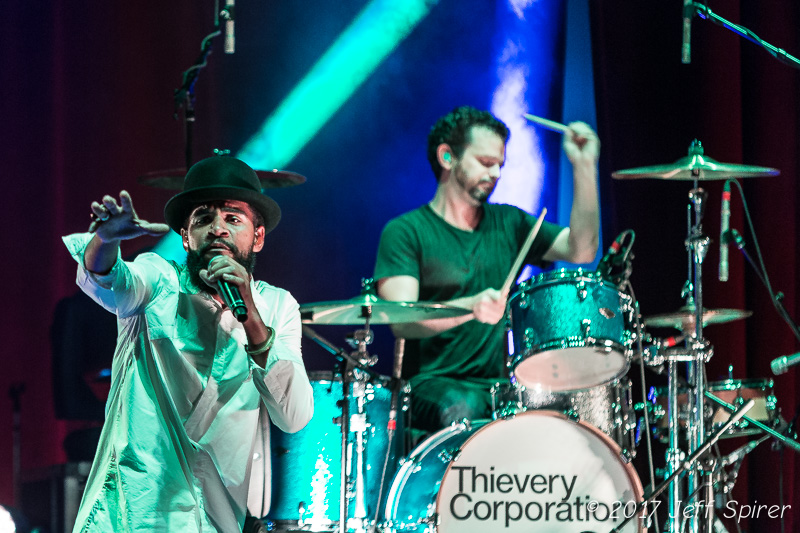 Now local by way of Massachusetts, MC Mr. Lif was also in fine form, cheerleading and pushing on the crowd with his energy and clearly felt raps about social injustice, the police state, etc. on songs like “culture of fear” and “Ghetto Matrix.” By far he was the most animated performer. 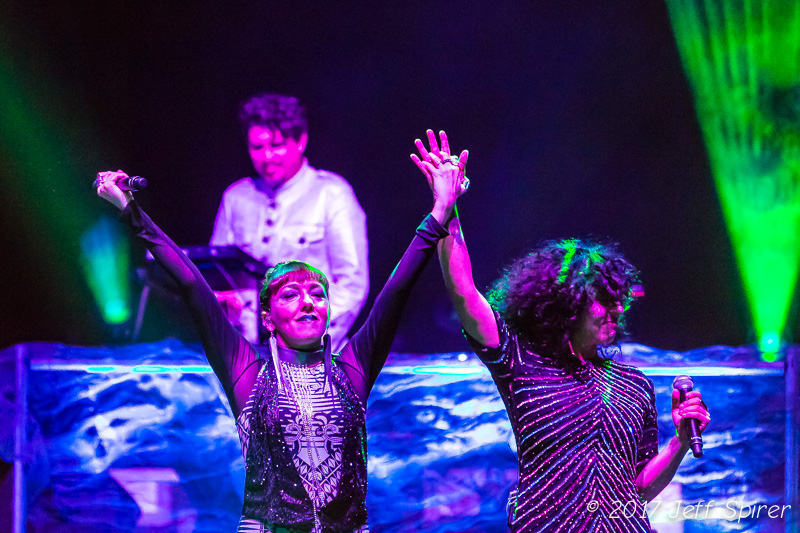 And, of course, on board were the much loved Natalia Clavier and LouLou Ghelichkani who have appeared on many TC albums and tours. Loulou in her breathy chanteuse voice usually intoned in French, which made me think of a modern Francois Hardy; Natalia in her more smoky jazz-inflected delivery which was so effective on songs like “Love Has No Heart” from “The Temple of I and I.” 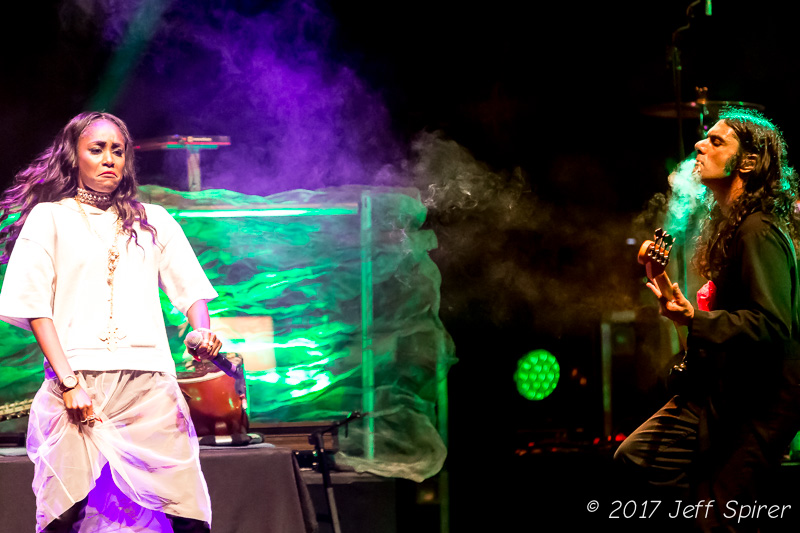 And on board was also Raquel Jones from Jamaica, who appeared on the latest “The Temple of I and I” LP. She did a fast patois rap on “Letter to the Editor” and also the reggae-themed “Road Block.” 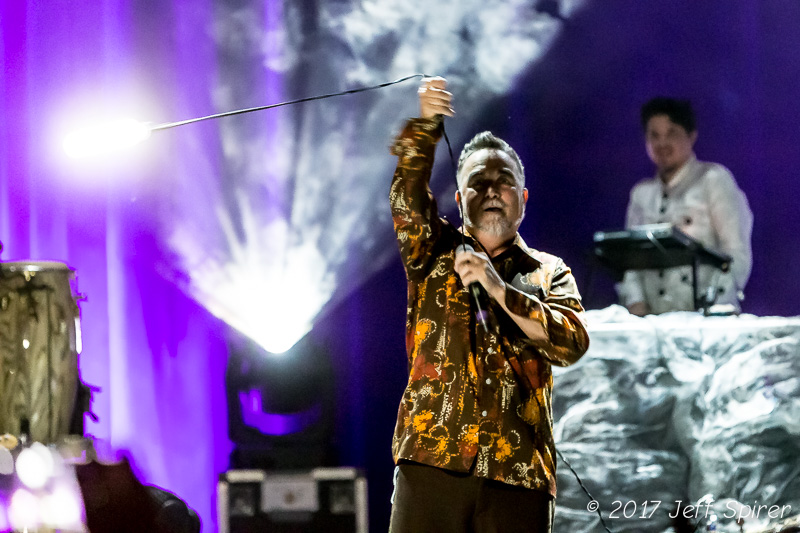 Frank Orall also did one more song “The Heart is a Lonely Hunter” from Cosmic Games while swinging a light bulb in a huge circle; Frank appears to be the special effects singer. 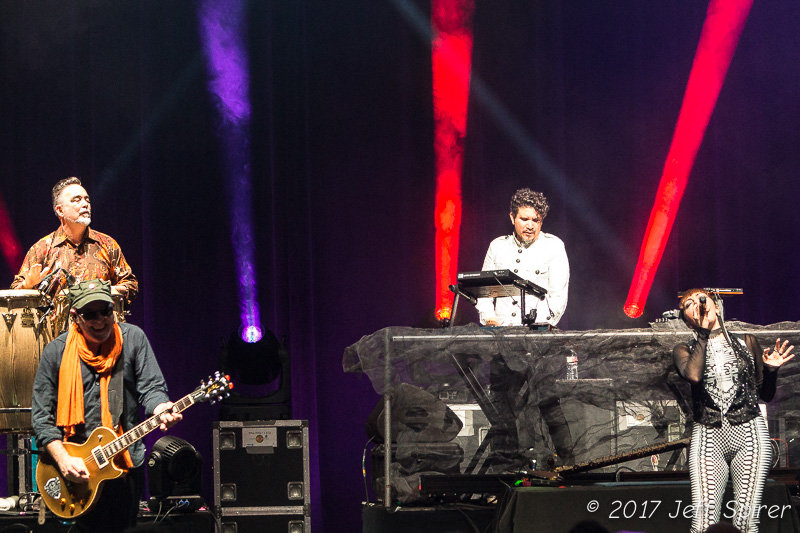 The rest of the band (guitar/sitar, bass, drums, percussion, keys) ably did their jobs, pretty much staying out of the way of the singers (although the bass player had a tendency to march around risking collision), no grandstanding or solos with the exception of a few short percussion spells played by Frank Oral. The sound was actually surprisingly stripped down so for those of us used to the rich production of the records; this was an interesting change. Though the drummer was powerful and precise it was very different from the nimble, lighter machine rhythms generated on the records. But also you had a very hypnotic lightshow with scintillating patterns and colors throughout the evening. 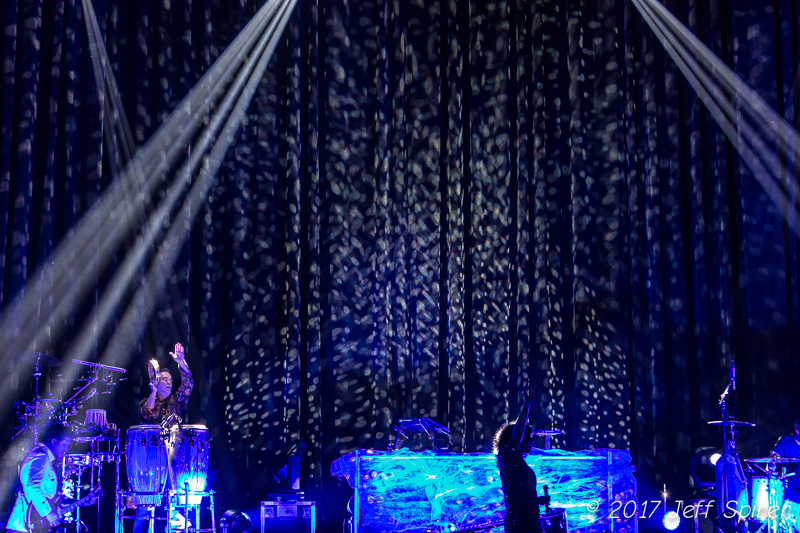 The emphasis appeared to be on giving all the singers a spotlight and highlighting new and classic material; for a band with as much history and material and guest artists this was probably a series of daunting managerial decisions. But they did pull that off and had the audience skanking in appreciation and a few lighting up to the mood of the night.

Canadian group Delhi 2 Dublin opened for Thievery Corporation with their electronics/fiddle/dhol (drum)/vocals, a culture mashup which got the audience dancing well before TC came on. D2D has basically defined the fairly narrow genre of Celtic dub built around the Indian and Irish roots. Dhol master Ravi Binning returned towards the end of TC’s set to add some powerful beats.

Here’s a slideshow with more photos by Jeff Spirer of Thievery Corporation:

For more information about Thievery Corporation, see their website.