“No matter what night it is, it feels good to be here,” Spencer Morphy, frontman of The Velveteins, smiled into his microphone. Pushing shaggy blonde hair from his face, illuminated by Café du Nord’s dim red lights, Morphy and his bandmates joked throughout the evening about the mellow Tuesday night schedule. But for the sizeable audience packed around the stage of the lower level of Swedish American Hall, the lively set was anything but dull. 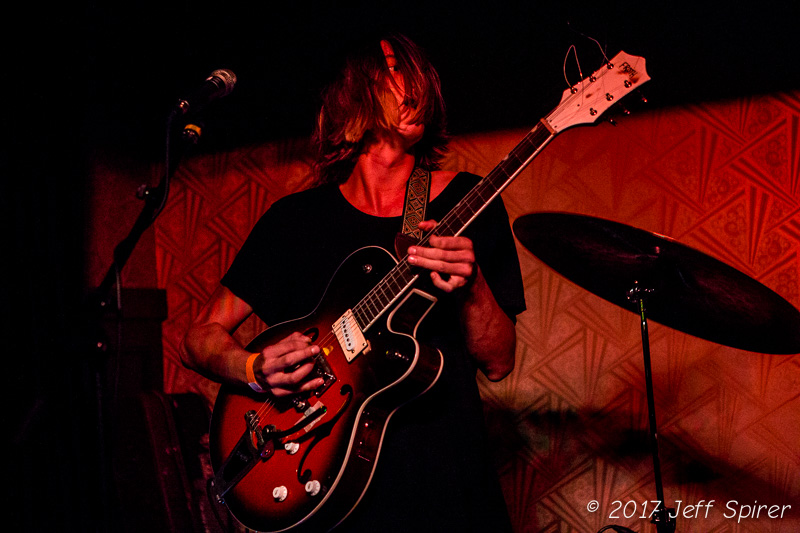 The Edmonton three-piece fall under the blanket label of indie rock, but such a broad characterization does a disservice to the depth of sound they performed. Morphy and his bandmates, Addison Hiller on drums and Dean Kheroufi on bass and keys, have drawn together garage with surf rock, for a sound that is as psychedelic as it is gritty. Opening the set, “Monica Louise” exemplified the band’s unique sound. Building steadily from the lone guitar groove into a crashing, percussive chorus, the group set the stage for an energetic set. 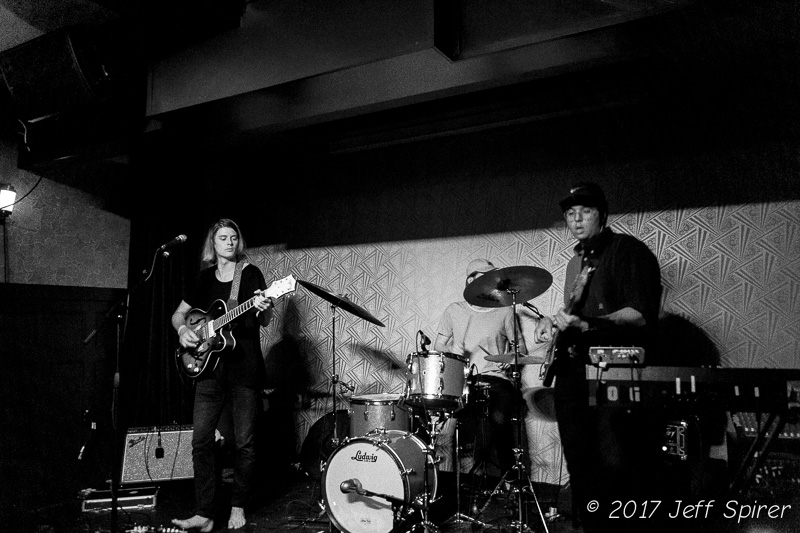 “Don’t Yah Feel Better” brought one of the evenings undeniable highlights. Morphy’s voice, reminiscent of T. Rex’s Marc Bolan, glided through the song’s shimmering guitar hooks and Hiller’s effortlessly fun lyrics. It was impossible not to smile during the infectiously fun performance as Morphy trilled ”Don’t it feel fine all of the time?” Next was “Midnight Surf,” a dreamy surf-rock synth trip, a departure from the bouncy garage rock of the previous song. Kheroufi’s ethereal synth paired with Morphy’s soft croon made for a wonderfully dozy beach vibe. “All Night Baby” followed, a 60s-styled carefree tune, driven by a catchy bass line and bouncy guitar riffs. 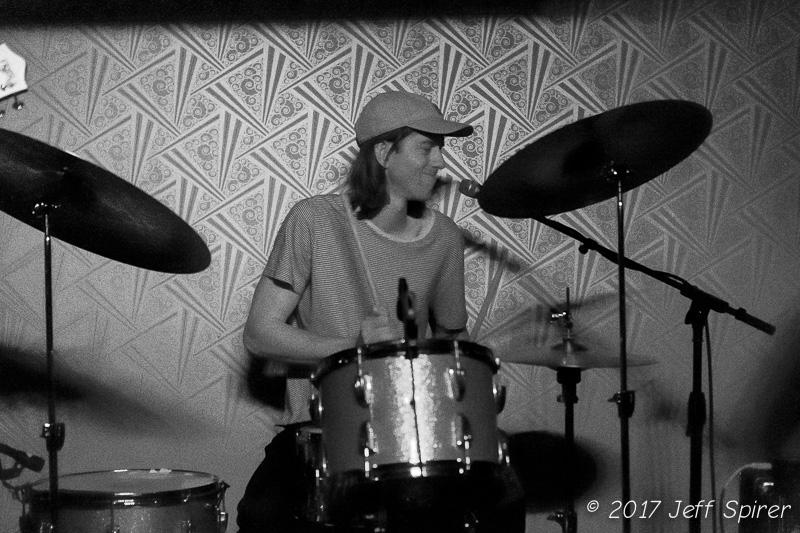 Café du Nord’s intimate atmosphere highlighted the playful camaraderie of the group. The goofy twenty-somethings laughed and smirked onstage, side-eyeing each other between songs and chatting with the audience. Hiller recalled the delay getting his American social security number in the previous days due to having two middle names. In response, Morphy joked, “Yeah they had to send it up, so they sent it to God. And he’s like ‘I’m not sure about this fucking guy.’” It was moments like this, small glimpses into a genuine friendship, that added a level of joy and authenticity to an already entertaining performance. 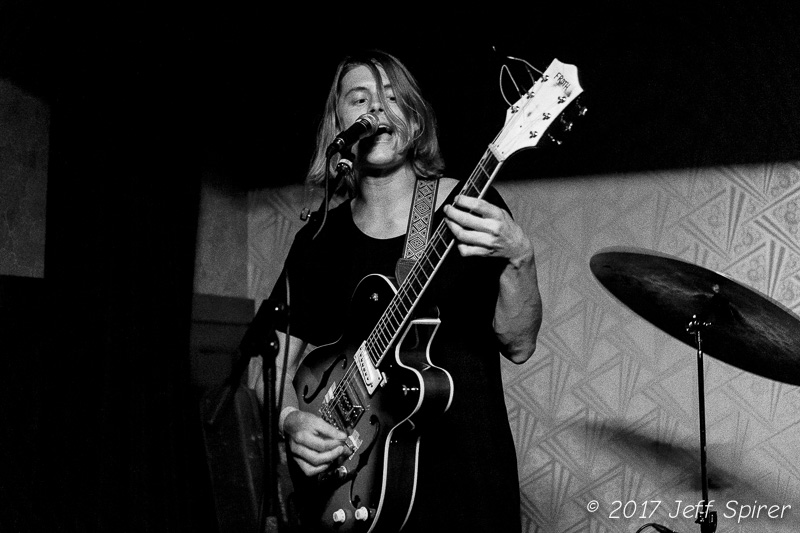 Quintessential sad-boy rock “All I Do” slowed down the set for a pleading croon. An irresistibly catchy guitar riff opened the song, leading into Morphy’s imploring, whispering melody. Accented perfectly by rolling percussion, the song surged into a boisterous, shouting conclusion. 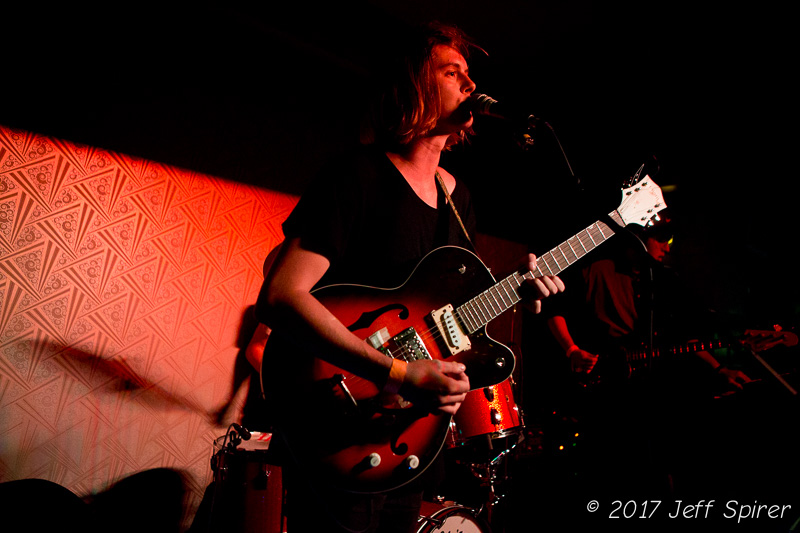 The Velveteins ended with “Hanging from the Ceiling”, a kaleidoscopic swirl of fuzzy reverb and clanging guitar. Crescendo-ing into a fervent swell at the bridge, Morphy slid effortlessly from his laidback, melodic voice into raucous yells, a skill he showcased deftly throughout the set. The song was visceral both in composition and performance, the band’s energy sparkling onstage in a perfect conclusion to the set. The audience met the band with enthusiastic cheers at the final notes, some yelling for an encore. 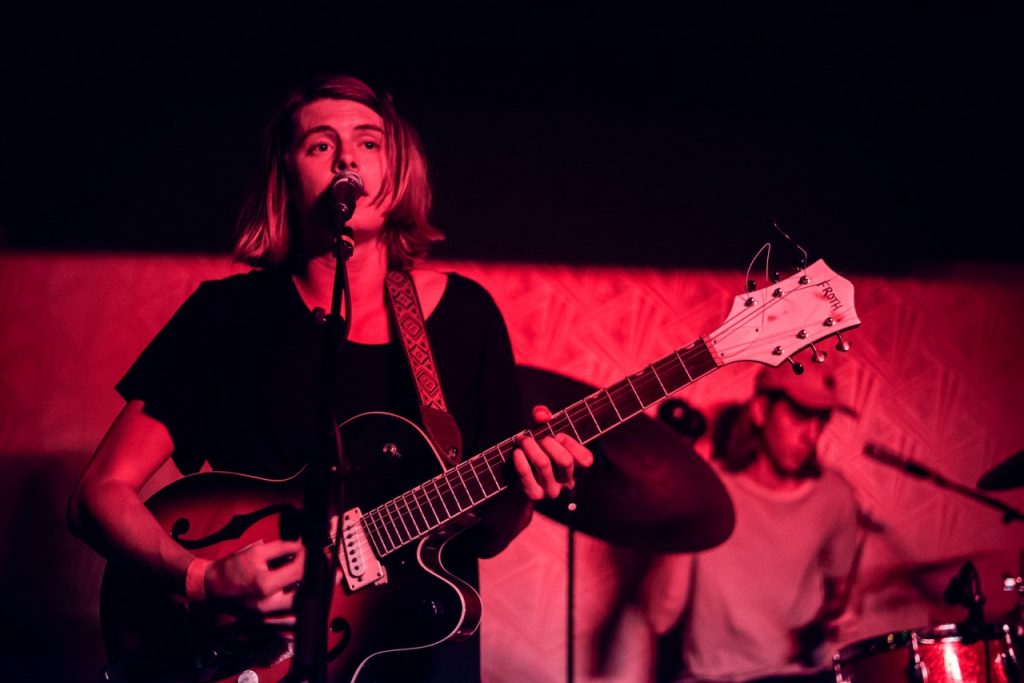 In the small venue on such a quiet Tuesday night, The Velveteins put on that rare kind of show where it just all goes right. While there were no elaborate stage design or lights, there was no need. This charming indie band stands strong on its foundation of unique sound. For those lucky enough to sing along with the cheeky Canadian rockers, it was a performance to point to say “I knew them when.” And when The Velveteins roll back into the city in their haze of surf rock glory, it will not be a show you’ll want to miss.

Dream pop band Cruel Summer opened the evening. The adorable hipster group were as charming as they were enjoyable. Delighting with atmospheric rock, the local group brought playful experimental sounds that swirled together for a set of expansive, relaxed tunes, a perfect introduction for The Velveteins.

Last photo by Dana Jacobs. All other photos by Jeff Spirer.

Setlist: Monica Louise | Strange Side of the Street | Daydreams | Don’t Yah Feel Better | Midnight Surf | All Night Baby | All I Do | Hanging From the Ceiling

Find out more about The Velveteins on their website.