San Franciscans have always been fascinated with the history of the Barbary Coast, our very own red-light district made famous during the late nineteenth century. But no one deserves more credit for resurrecting the local love affair with the spirit, look, and artistry of the bawdy Barbary Coast as the Vau de Vire Society . Founded in 1997 by husband and wife team Shannon and Mike Gaines, the Vau de Vire Society has performed their signature avant-cabaret shows at vintage-themed events like the Edwardian Ball and New Bohemia, as well as alongside musical acts as diverse as Moby, The San Francisco Symphony, Dresden Dolls, and Fishbone. 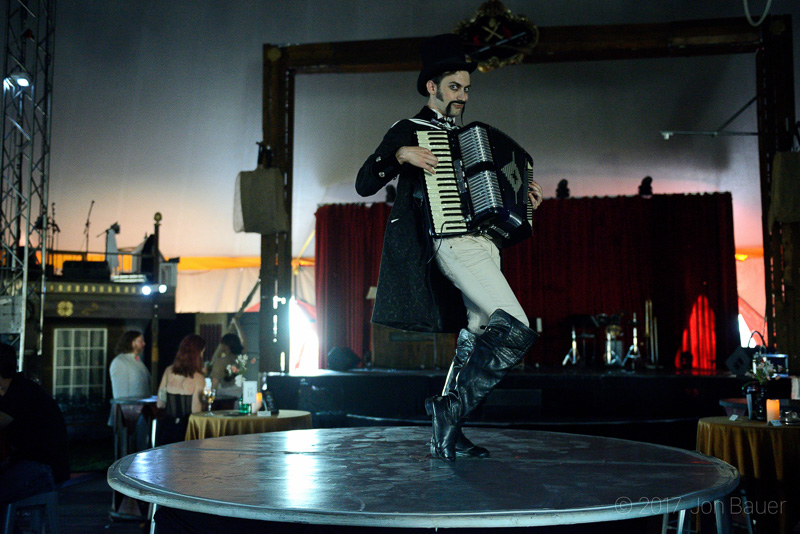 Their newest innovative production, The Soiled Dove, draws inspiration directly from the dance halls and saloons of the infamous Barbary Coast. The name comes from a term used to describe the harlots who worked in the illicit establishments, earning money by dancing (or more) with the patrons – sailors, gold miners, and society’s undesirables. Said founder Shannon Gaines of the show’s inspiration, “The Barbary Coast was undoubtedly a very rough time for all, especially women, so our intention with The Soiled Dove was to create a safe haven from the wretched happenings outside of its walls, where the harlots are the owners of the establishment.” 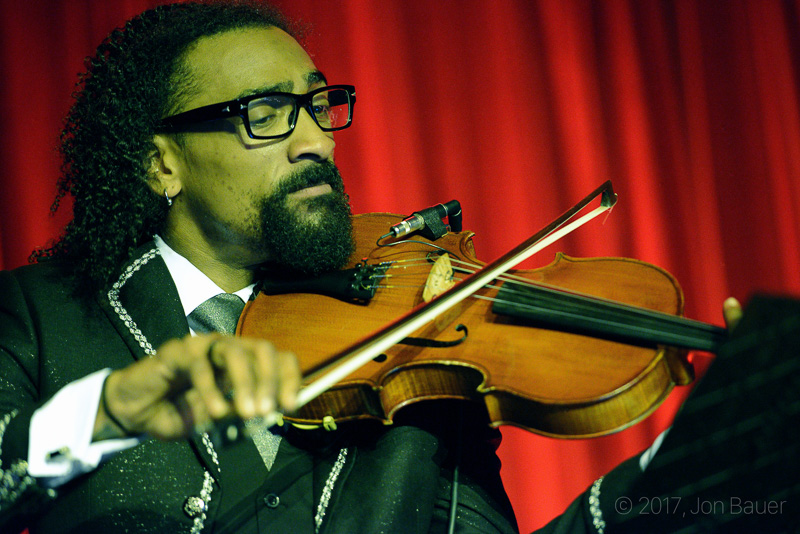 Staged under a big top circus tent for the month of June at Alameda Point, the female-centered show truly transports its audience to another era. The moment one entered the world of The Soiled Dove, they were immediately taken in by two-story sets that make use of all 360 degrees of the tent, plus a roving cast of characters offering decadent bites topped off with playful banter that draws you deeper into their raucous world of can-can dancers, harlots, and rebels who defined the Barbary Coast. The show blended performances by aerial artists, acrobats, dancers, and contortionists with a formative live band, the Jazz Mafia, who set the tone from their second-story perch to the side of the main stage. 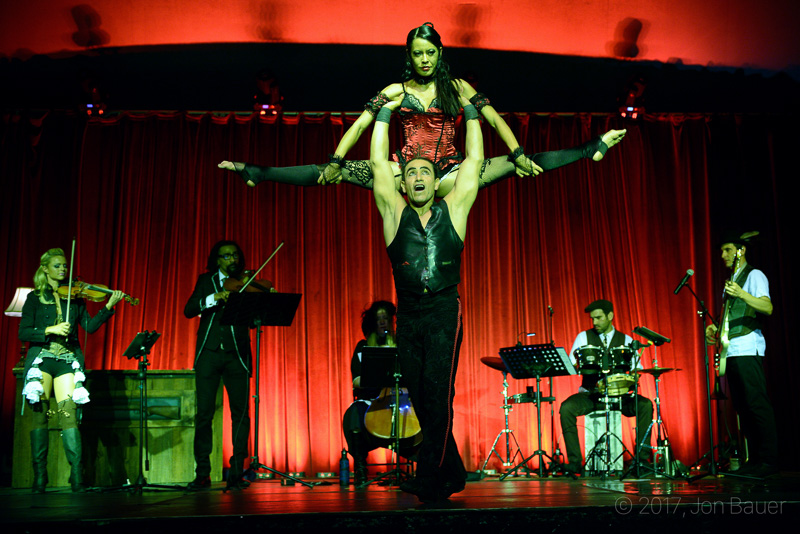 For those wise enough to have come for the dinner and stay for the show, guests were treated to a sumptuous four-course meal catered by Work of Art Catering. While the official show did not begin until the coconut lime mousse had been cleared, the pre-show performances providing ample entertainment for diners with a mix of high-caliber acrobatics and stunning aerial artistry. 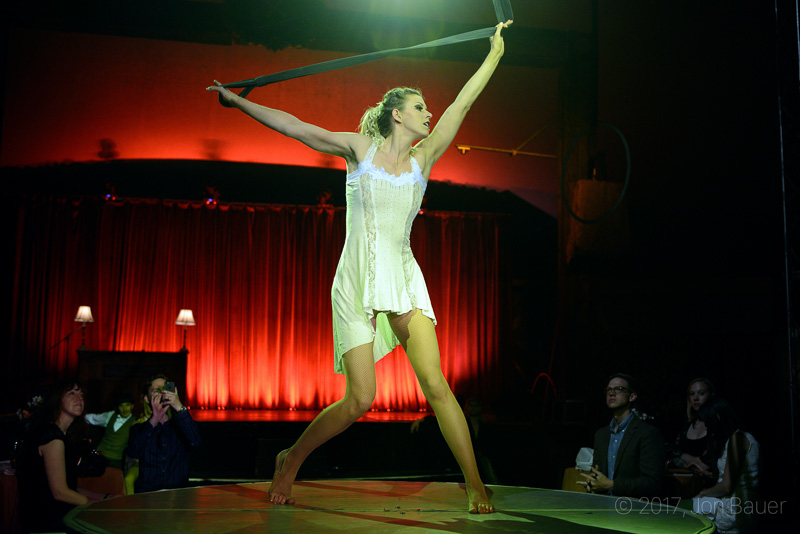 The Vau de Vire Society prides itself on creating immersive theater, and indeed, the performance continually took place, at the guests’ tables as much as on any one of their three stages. One moment a corset-wearing “dove” delivered plates of the absurdly good pastrami short ribs, and the next, she was suddenly under the lights, center stage, gracefully pulling her body up two-stories of silk fabric, only to come tumbling down to earth, finishing in a balletic pose a mere two inches from the ground. To complete the sensory inundation, the band Cosa Nostra, a side project of members of Jazz Mafia, kept the music flowing throughout the meal. 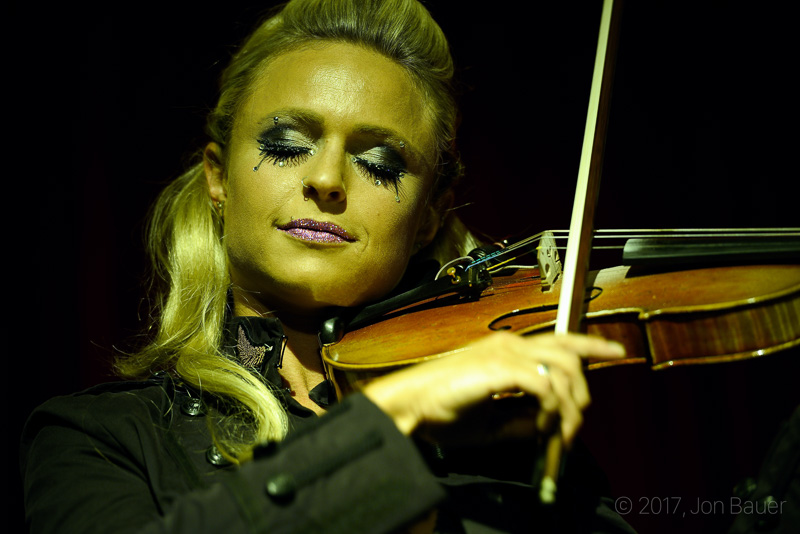 Dinner blended seamlessly into the main show. Tables clustered around the circular stage in the center of the tent reinforced the sense that there is little separation between audience and performer. While the aerialists and contortionists captured much of the attention on center stage, the show continually moved throughout the tent. Audience members could suddenly find themselves plucked off of their stools for a song or dance with the cast. 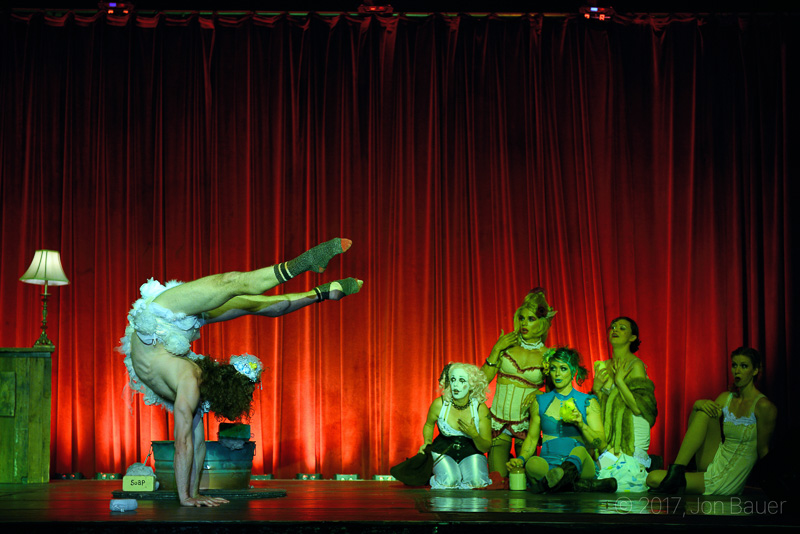 The thrilling performances continued to surprise as the night wore on. Miguel Balderrama and Becca Feller delivered an acro-balancing partner dance that drew audible gasps from the audience several times. Cowboy Girl, as we were introduced to her, flipped the script on the legendary circus act of men throwing knives at scantily clad women. Instead, she teamed up with an impossibly strong male acrobat who managed to invert himself balancing on one hand, and grasping a balloon in the other, which she expertly destroyed with a BB gun. 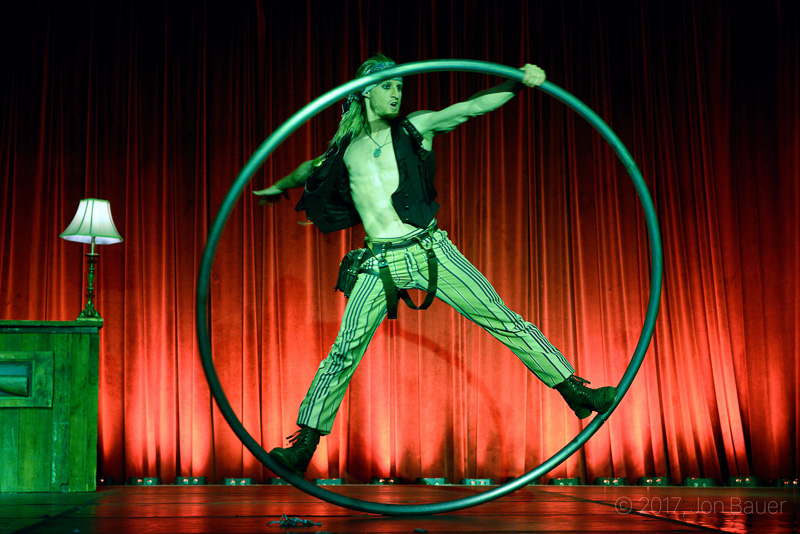 The show wrapped up with aerial dancers flipping simultaneously in four hoops suspended throughout the tent, followed by the classic can-can girls dancing from stage to stage as the final nod to our beloved Barbary Coast. This annual event of food, dance, aerial magic, and music is not to be missed. San Franciscans just need to dust off their tops and tails- or fishnets and bustiers, and come prepared to be part of this stunning, lively show when it returns next year.

Here’s a slideshow with more photos of The Soiled Dove by Jon Bauer:

Find out more about the Vau de Vire Society here.