It has been a true time machine of hard rock this past week. And Thursday night the Teutonic terrors known better as Germany’s rock juggernaut the Scorpions effortlessly flipped the switches and levers to transport the rapt SAP Center audience of 17,000 strong back and forth through the 70s, 80s, 90s, and to the present. 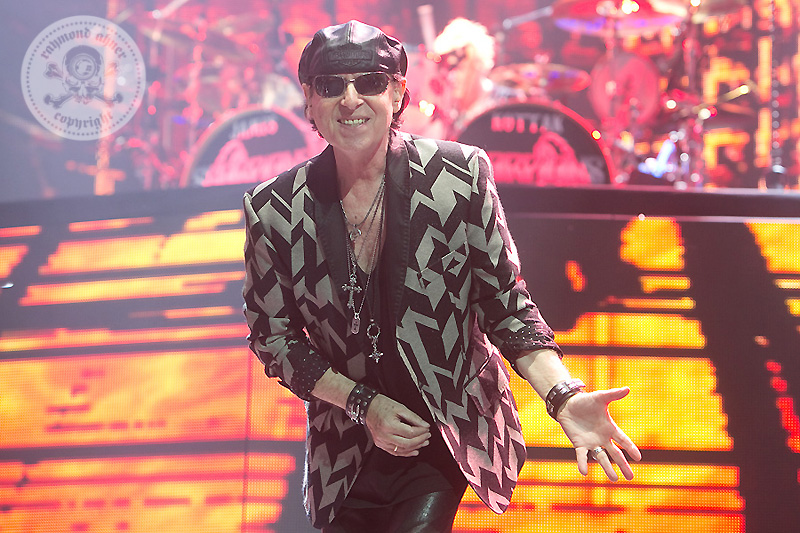 Between the Scorpions show and the epic AC/DC show a few days earlier in San Francisco, it is clear that the bands that laid the foundation of hard rock/metal throne are loathe to relinquish their seats. The Scorpions let it be known that despite the fact that they are celebrating their 50th anniversary this year, they are just as on top of their collective game as they have been at any time in their previous five decades, weaving together an outstanding 22 song – 100 minute show.

Led by the spritely 67 year old vocalist Klaus Meine, and longtime lethal guitar duo Rudolph Schenker and Matthias Jabs, and backed up by drummer James Kottak and bassist Pawel Maciwoda, this incarnation of the Scorps put a spell on the crowd as they dug deep into their half-century old catalog. 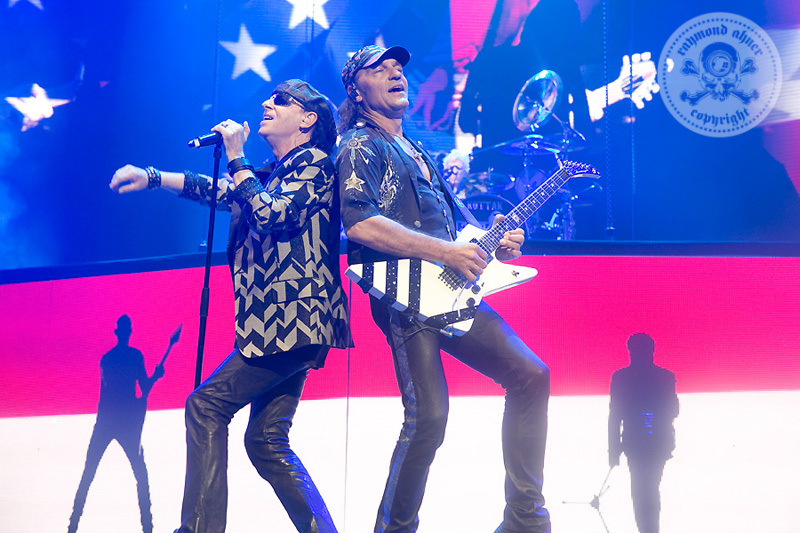 Bursting out of the gates with ‘Going Out With A Bang,’ a straight ahead guitar-driven head knocker (off their current release ‘Return To Forever’), the Scorpions lifted off awash in a sea of lights and multi-media projections. Klaus then shouted, “Are you ready San Jose?!!” After a flip of a few switches on the virtual time machine…press the button….and we are dropped into a Scorpions show circa 1980.

To show that this was not a hallucination they launched into ‘Make it Real’ and backed it up with a stellar rendition of the crowd favorite ‘The Zoo’ off of the epic Animal Magnetism album, highlighted by Rudolf looking about fifteen feet tall and lurching back and forth to the metronome cadence of the song…..the audience ate it up. 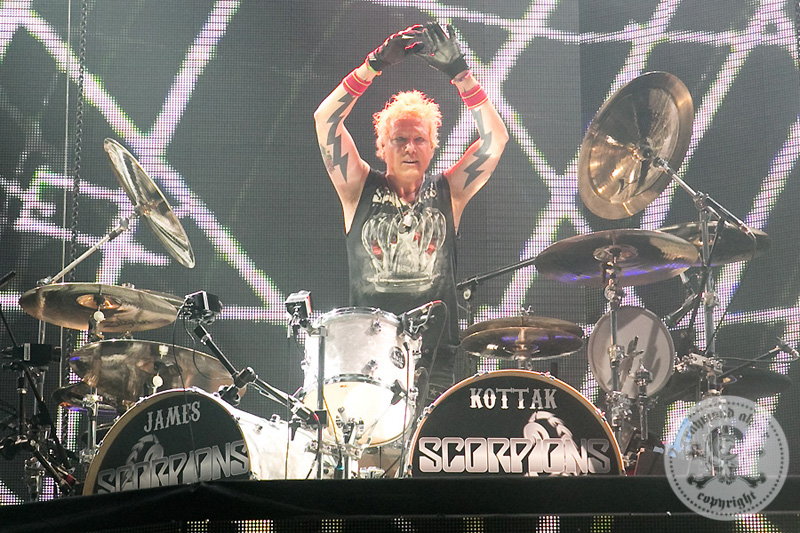 A quick stop in to 1979’s Lovedrive album produced the starry eyed instrumental ‘Coast to Coast’ featuring the razor sharp dual guitars of Schenker and Jabs which took the ride to the next level. Little did we know that Klaus and the boys were about to turn it up another three notches on the frenzy-meter. Switch flip…knob turn….we are back in the 70s, kids.

This is where the night truly went into hyper drive. Aiming their stingers at the most loyal and diehard of their fan base, the Scorpions struck with a medley straight out of the early/mid 70s……the Uli Roth years. From ‘Top of the Bill’ (from In Trance – 1975), to ‘Steamrock Fever’ (lead track from Taken By Force – 1977), to ‘Speedy’s Coming’ (Fly To The Rainbow – 1974) to the absolutely transcendent ‘Catch Your Train’ (Virgin Killer – 1976), all featuring the stunning, explosive guitar wizardry of Matthias Jabs channeling Uli Roth, it was like we were transported back to the age where you would turn the album over in lovely anticipation of hearing the magic that lies on side two (that’s right kids, you would actually have to flip the album.) The crowd went hoarse with the ovation that followed. 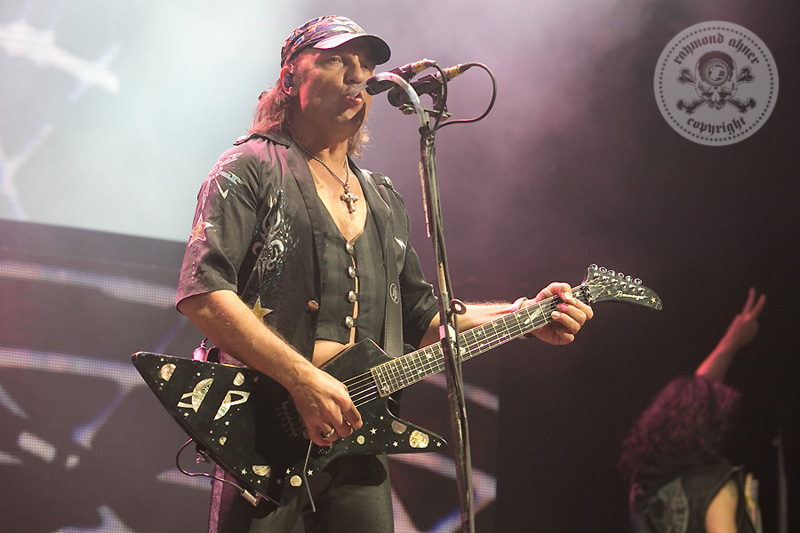 As if to remind folks that they were in complete control of this time travel, all of a sudden we were back in the now…with ‘We Built This House’ off Return To Forever. So as not to induce the bends from so much deep diving time travel, Matthias gave the crowd a nice sedative with his Satriani-esque (did I just coin a phrase?) guitar work on the instrumental ‘Delicate Dance,’ swaying into soothing shuffle grooves and punctuated by jazz/rock fusion mastery.

At that point, the setlist visited the realm which has brought the most commercial success for the Scorpions, the power ballads for which the band has become so renowned. The four song run of ‘Always Somewhere’ into ‘Eye of the Storm,’ ‘Send Me An Angel,’ and finally the grandiose ‘Winds of Change’ lit the arena up with cell phone flashlights (back in the day this would have been handled by lighters), transforming the concert bowl into what looked like a sea of floating fireflies. 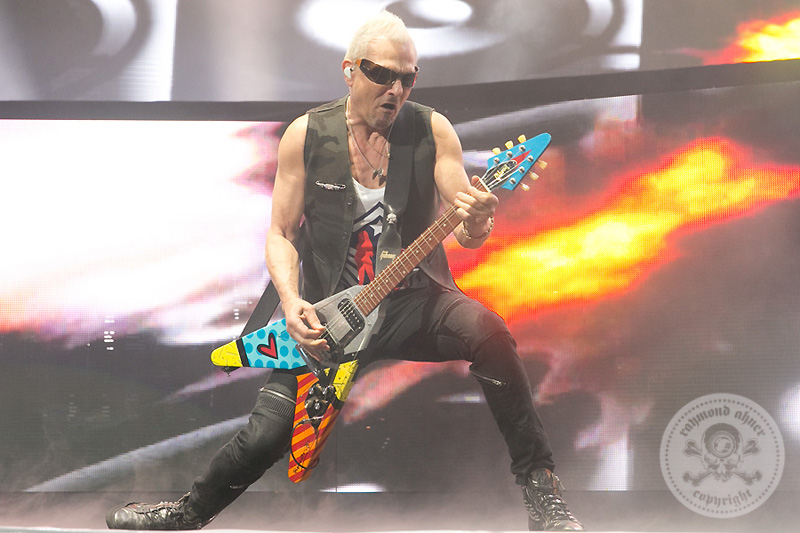 Slow stuff now aside, and surprisingly most folks stayed in their seats instead of exiting for concessions or the restrooms, the rest of the evening was a freight train of rock. Firing it back up, the Scorpions took no prisoners charging though ‘Rock and Roll Band’ and the double-time head banger ‘Dynamite.’ The stage was then turned over to drummer James Kottak, whose drum riser literally levitated off the stage as he incessantly pounded away during a drum solo which included a variation of John Bonham’s signature drums from Led Zeppelin’s ‘Rock and Roll.’

The rest of the band then re-emerged (James had said they were backstage taking shots of whiskey), and it was on. Like a predator stalking its prey, the Scorpions went for the jugular, stomping through the hits that catapulted them into international stardom during the mid-80s.

Dialing up the time machine once more, they took us to 1982 continuing on with cuts from the Blackout album, playing the title song and backing it up with the hard rocking melodic hit ‘No One Like You.’ Fast forward again and the Scorpions finished up with their regular set with the bombastic ‘Big City Nights’ from the 1984 masterpiece Love At First Sting album, which all at once captures the excess and innocence of mid 80’s MTV era hard rock. The lights then dimmed leaving the audience chanting “Scorpions!!!….Scorpions!!”

After a few moments the 50-year old quintet (still amazed that they have been around that long), came back out to unleash another couple of hits off their Love At First Sting joint, laying down ’Still Loving You,’ and the ubiquitous 80s monster jam ‘Rock You Like A Hurricane.’ Good night, thanks for coming…..the crowd was spent in the euphoric bliss of reveling in hard rock royalty.

Overall, this evening of time travel was epic in every way. Great performance, great crowd, and great nostalgia. You see I grew up listening to the Scorpions. I remember seeing them as a bright eyed young version of me at Day On The Green at the Oakland Coliseum back in July 1982 with Loverboy, Foreigner, and a fledgling Iron Maiden (I still have the ticket stub – $10.50.) As a matter of fact the Lovedrive, Animal Magnetism, and Blackout albums were huge reasons why I started cutting school to play guitar way back when. I remember spending hours thumbing through record bins at Record Factory, looking at all of the suggestive (and now forbidden album covers.) I remember spending my saved money on Blackout and reading through all of the lyrics and liner notes, and having to deal with the grief and eye rolls from my mom asking why the guy on the cover had forks over his eyes. Those simple pleasures are now lost in this digital age of immediate gratification….too bad youngsters, that is the good part of music….not just the listening but the learning and the knowing and the imagining of possibilities. For a few hours it all came back thanks to a still rolling 50-year old band from Germany known as the Scorpions. 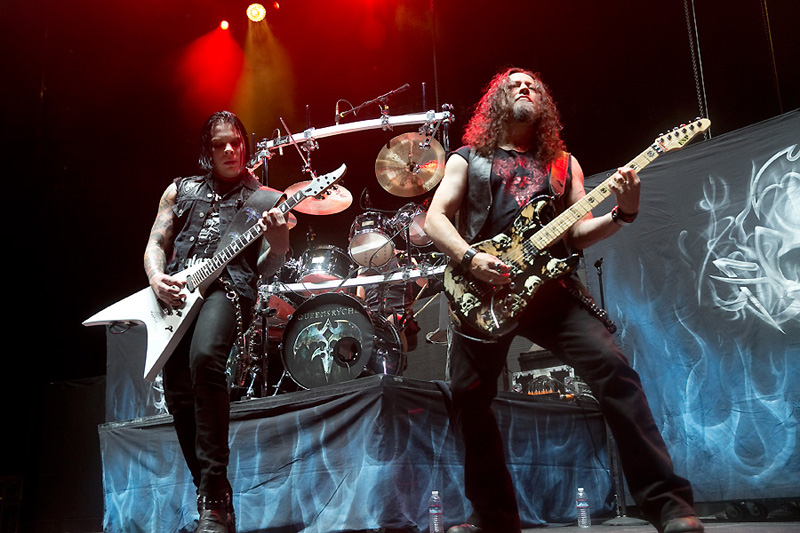 For those in the audience that were fortunate enough to arrive early enough (and if you opted for taking Caltrain to the show you probably did not make it in time…what a fucking mess of delays and waiting), you got a dose of the new brand of Queensryche, the metal forefathers of the Pacific Northwest. 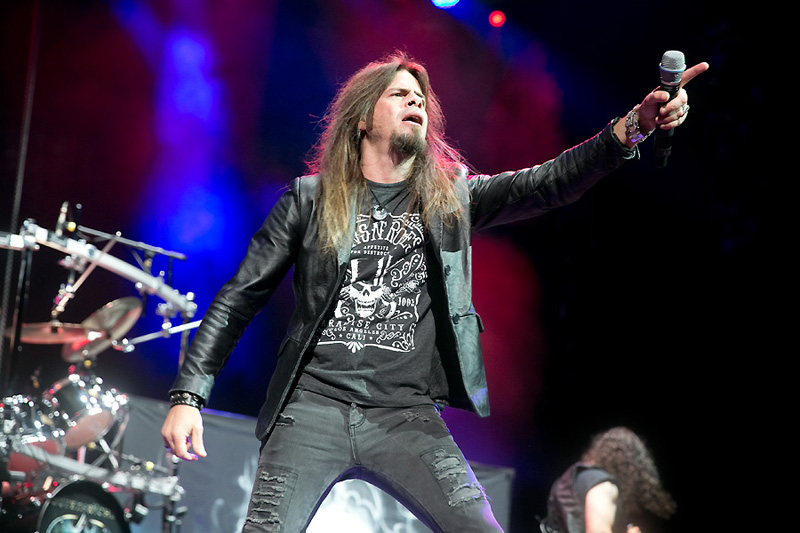 Albeit without original singer extraordinaire Geoff Tate and guitarist Chris DeGarmo, this version of Queensryche represented themselves well in a short but sweet nine-song set highlighted by ‘Jet City Woman,’ Grammy nominated ultra-hit ‘Silent Lucidity,’ and driven home impressively with the seminal Queensryche rocker ‘Queen of the Reich’ (first recorded in 1981 and released in ’84 on the ‘Queensryche EP’).

Now firmly back in 2015….in the afterglow of the Scorpions tearing it up last night at SAP Center…..hmm, let’s put on the radio. Uggh…puke!!!…Taylor Swift. Back in the time machine we go.

Setlist: Going Out With A Bang | Make It Real | The Zoo | Coast to Coast | Top Of The Bill | Steamrock Fever | Speedy’s Coming | Catch Your Train | We Built This House | Delicate Dance | Always Somewhere | Eye Of The Storm | Send Me An Angel | Winds of Change | Rock and Roll band | Dynamite | Kottak Attack | Blackout | No One Like You | Big City Nights | Still Loving You | Rock You Like A Hurricane

Get more information about Queensryche here.