With around a dozen musicians on stage, The Roots showed how hip-hop thrives with a live band, especially one skilled enough to fluidly cross genre boundaries without missing a beat, or a step. For the first half of their long set, the band explored funk with rap-fronted takes on R&B from War to The Meters. After that came some real head-turners, with a jazzy segment from the keyboards and guitar-driven mini-covers of Guns ‘N’ Roses and early roots reggae hit “Chase the Devil.” 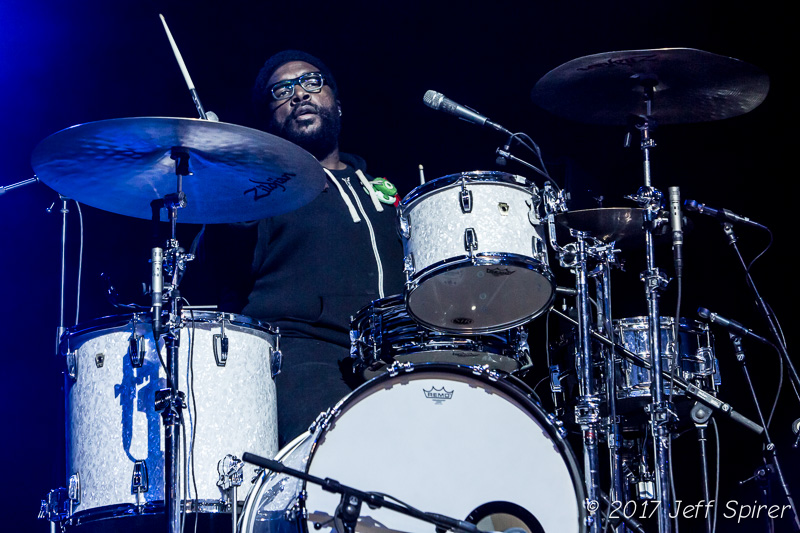 Questlove lorded over the proceedings from that platform, watchful eye keeping everything in check. The man makes great drumming look far easier than it is, hardly moving in the midst of things. As everyone should know by now, Questlove plays drums, writes songs, and produces recordings for a vast array of artists from Duffy to Jay-Z to John Mayer to Erykah Badu. And a lot more. 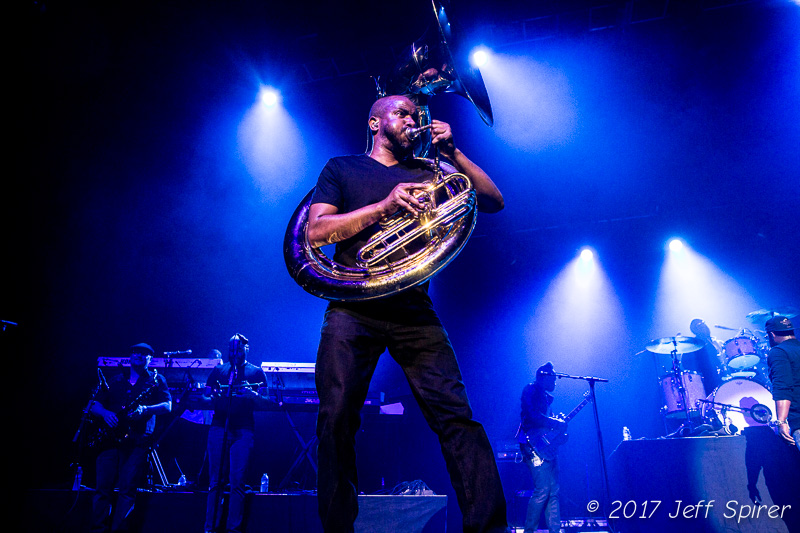 And then there was the sousaphone. Tuba Gooding Jr. (Damon Bryson), despite being dwarfed by his big brass instrument, honked and bounced his way across the stage, even jumping at one point onto (and off) the platform for Questlove and his drum kit. It was an impressive performance, both visually and musically. 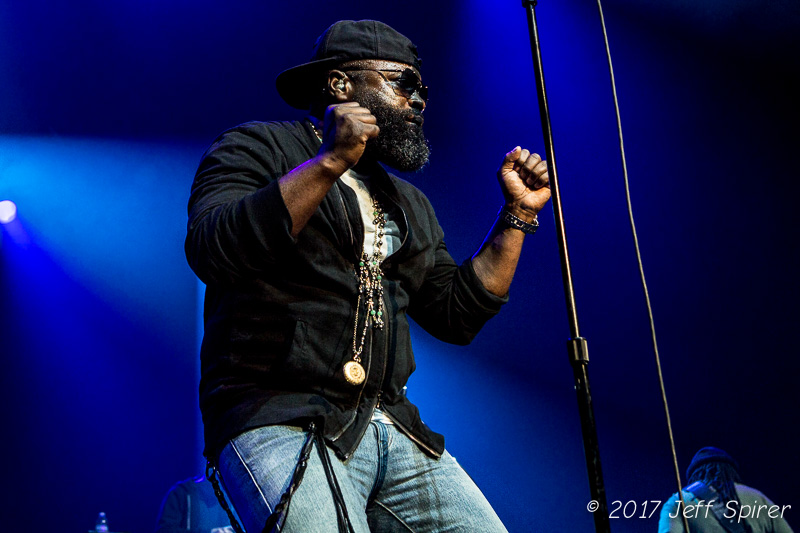 Black Thought, out front as the emcee since co-founding The Roots with Questlove, demonstrated proficiency with both originals and all the covers, turning cover lyrics into raps that sound organic, as if that’s the original way they were recorded. It’s tough to stand out in front of a huge group of musicians and still command a presence, which is exactly what Black Thought does. As a counterpoint, guitarist Captain Kirk sometimes sings melodic lines behind Black Thought and sometimes just out in front. Like the rest of the musicians, Kirk has phenomenal skills, demonstrated most dramatically when stepping out from the funk chords to insane shredding during the “rock section.” 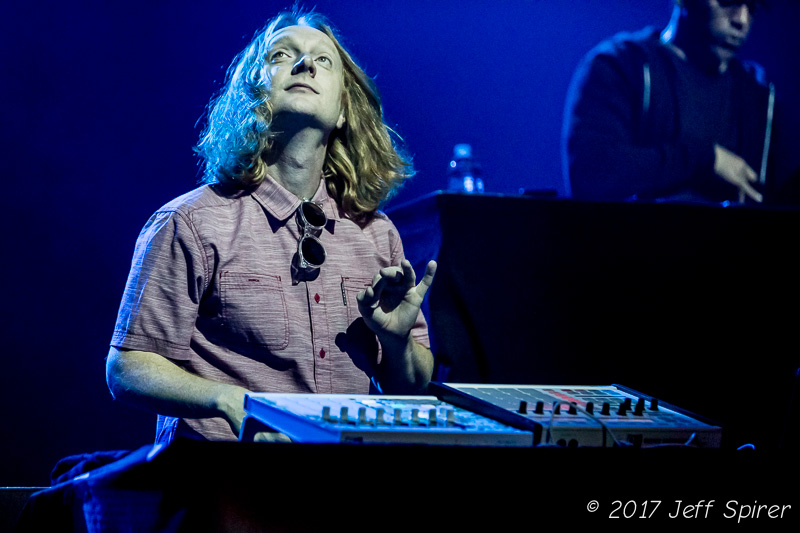 Probably the biggest surprise, for anyone who hasn’t seen him before, is Jeremy Ellis finger drumming his way through a seemingly impossible mashup. From the audience, it’s difficult to see exactly what it is that Ellis does; it’s worth checking out his mad skills on YouTube. Whatever it is, it keeps the crowd moving on its feet. 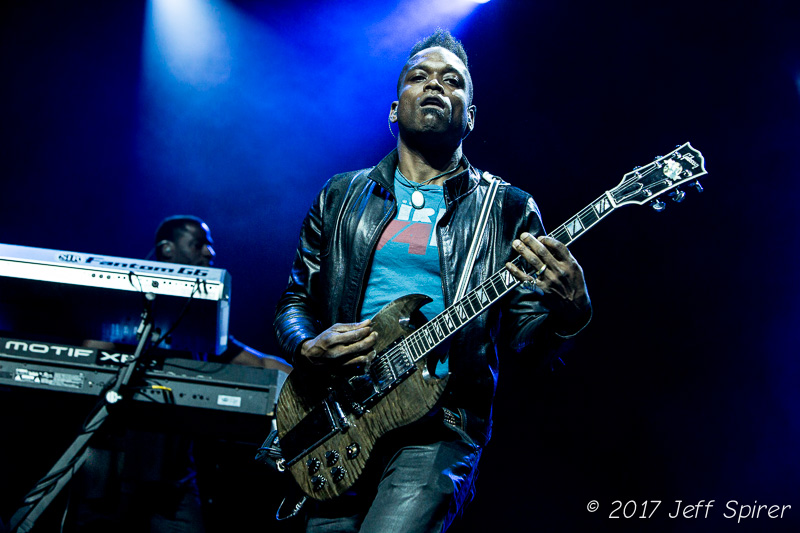 There were more fine solos from keyboards, bass, horns, and, of course, drums, as expected for any show with The Roots. At the end of the night, whether it was funk, reggae, metal, or hip hop didn’t matter, it was simply The Roots. 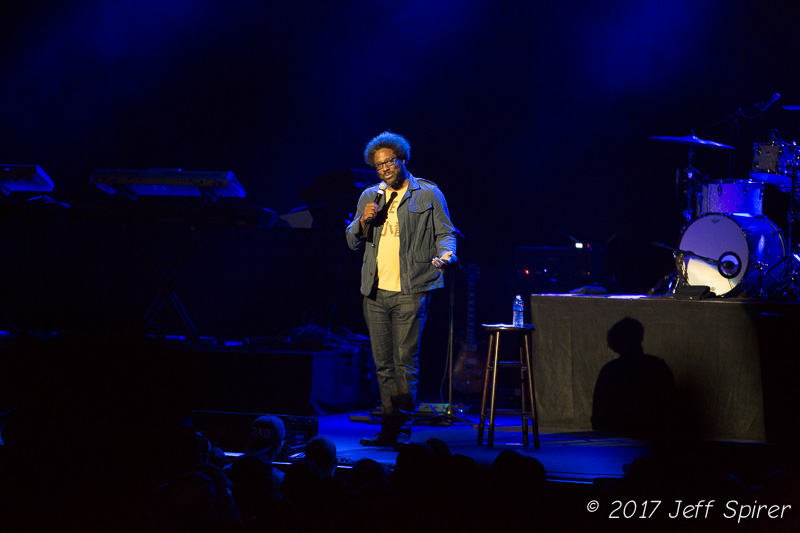 Local comedian W. Kamau Bell opened the show for The Roots. Bell currently hosts the show United Shades of America on CNN, a show exploring political and cultural themes in the US that opens and closes with comedy segments. In person, Bell projects an affability that belies the strong themes around race, the president, and Bay Area culture that his monologue hits. Bell’s targets may look easy, especially here in the Bay Area, but he deftly brings comedy to difficult and even dire topics.

Here’s a slideshow with more photos of The Roots by Jeff Spirer:

For more information about The Roots, check out their website.