In a scene that could have been extra footage from the Prince’s 1984 cult movie classic Purple Rain, fans milled around outside the entrance of The Fillmore in San Francisco, waiting to get a dose of ‘Purple Rain’ from The Revolution. Adorned in various configurations of purple….lace, leather, sequins, and a requisite ‘party people’ attitude that only Prince fans can bring, it was a fashion show of epic proportions that would have done his Purple Badness proud. 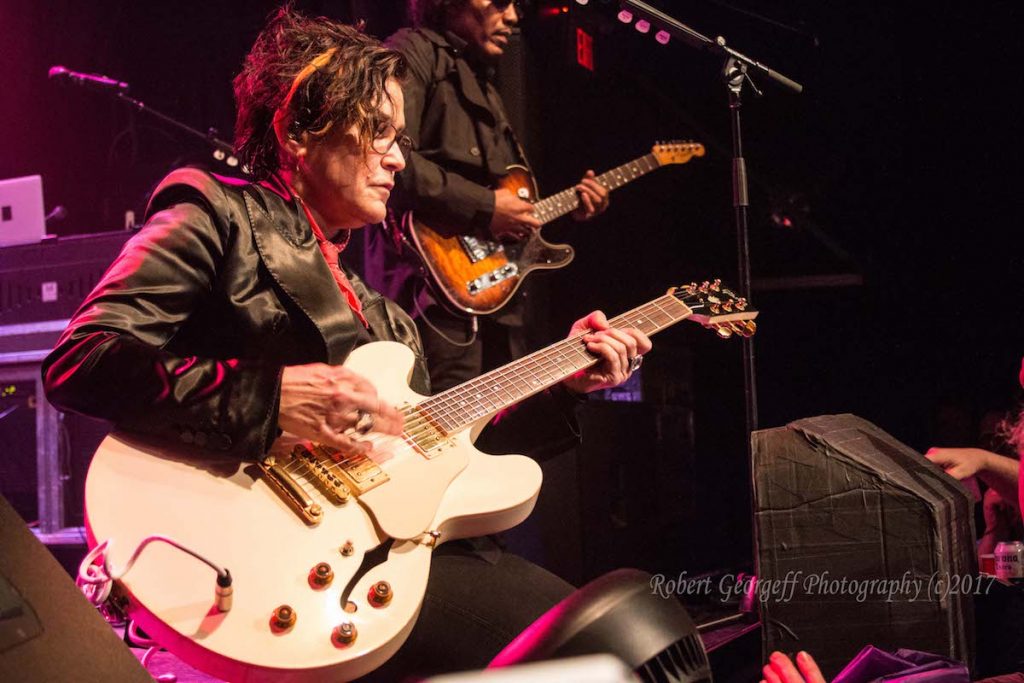 Looking closely at this backdrop, the only clues to the fact that we have fast forwarded 33 years (yikes!) since Prince and the Revolution sold out the Cow Palace for a week straight (supporting the release of the Purple Rain soundtrack) were the prevalence of vapes and cell phones. However when you look at the evening in the context of the present day, the enormous difference between 1984 and now is the fact that the musical genius Prince Rogers Nelson is no longer with us in the physical realm. 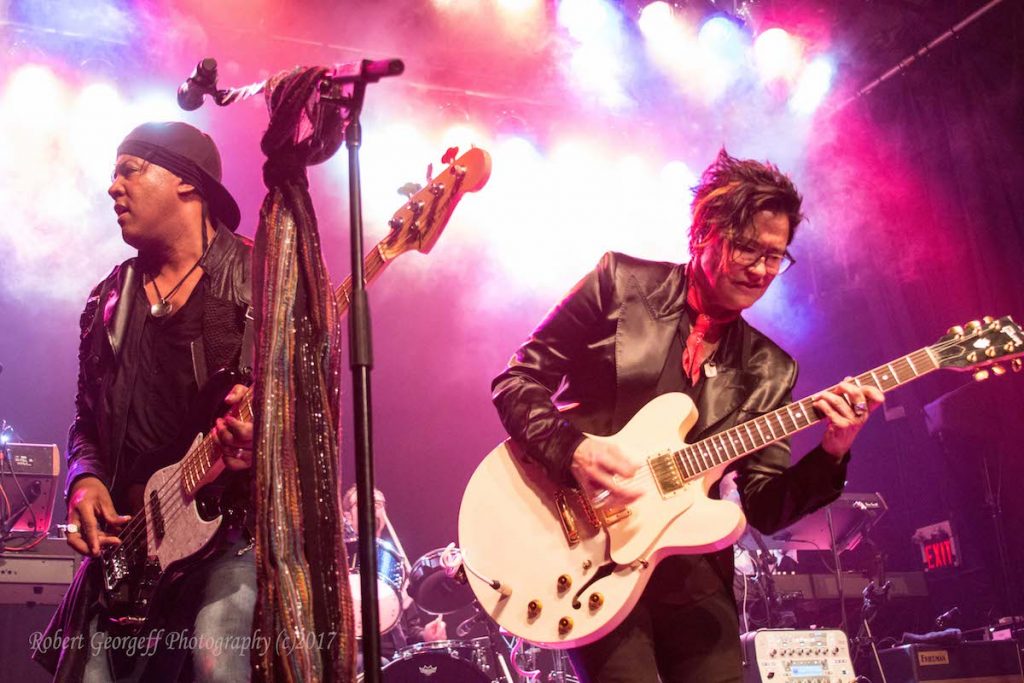 Sadness though is not a reason for fans of Prince’s music to stop the party. To celebrate his musical legacy, The Revolution (Wendy Melvoin – guitars / vocals, Brown Mark – bass / vocals, Lisa Coleman – keys / vocals, Bobby Z – drums, and Matt (Doctor) Fink – keys, vocals), the stellar band that backed Prince at the pinnacle of his career, performed a dynamic set of funked-up classics center-cut from his catalog. 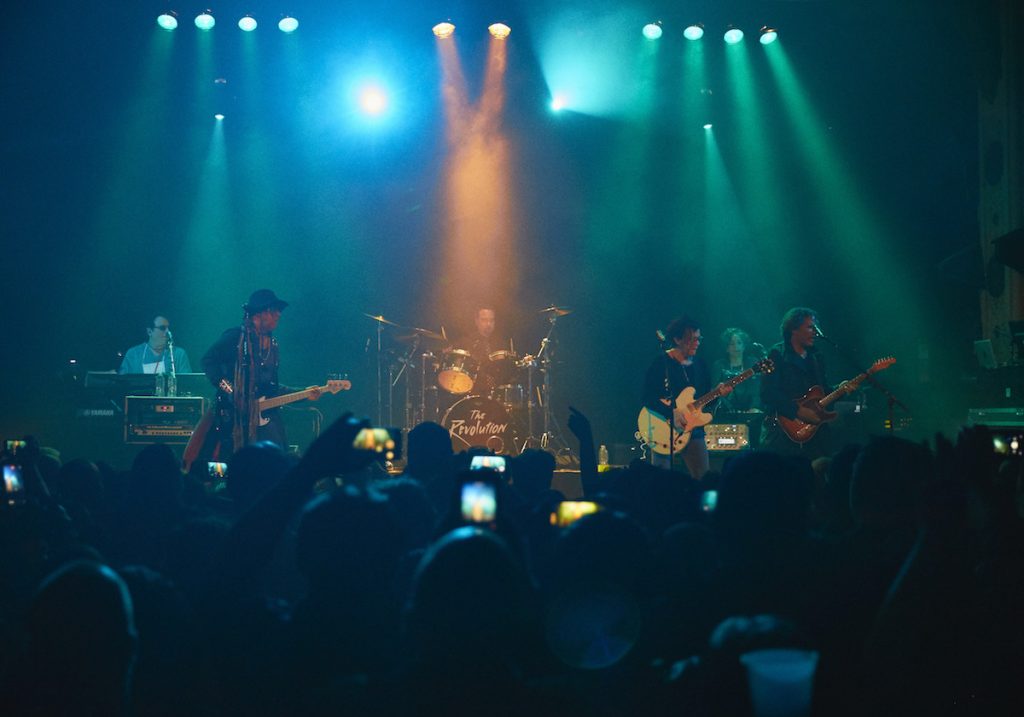 “Wendy?”…..”Yes Lisa”…….”Is the water warm enough?”….”Yes Lisa”….”Shall we begin?” With those words and the metronome backbeat from Bobby Z, the overdriven guitars of ‘Computer Blue’ ripped through the Fillmore and lit up the densely packed crowd. To remind us that this is 2017 and not 1984, it was bassist Brown Mark’s vocals that sang the purple words “Till I find the righteous one…” during the opener. 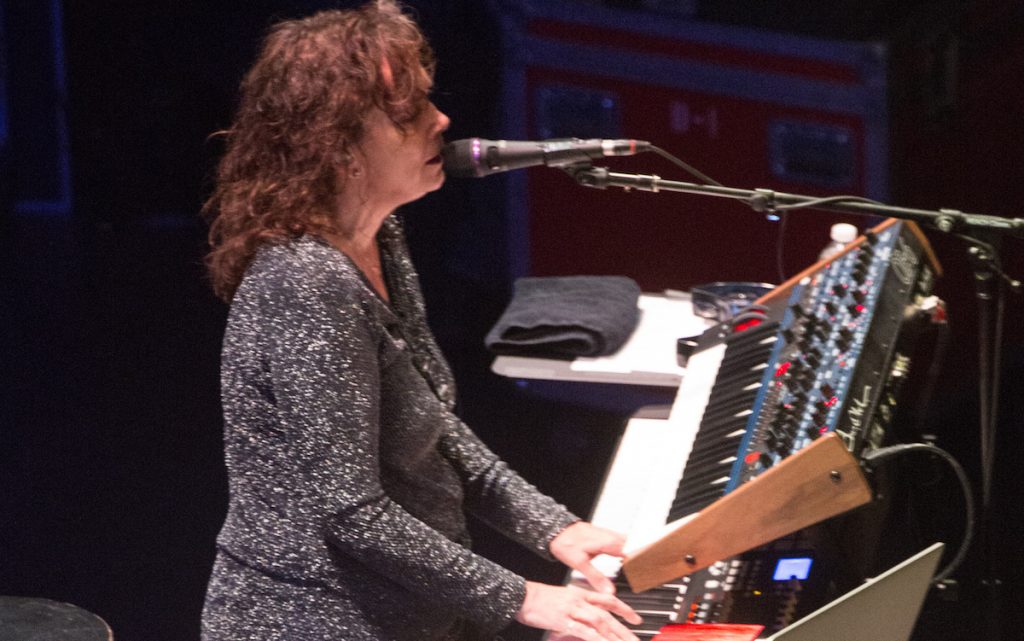 Diving directly into ‘America’ (Around The World In a Day – 1985), the room lifted…folks jumping and dancing around like they were in a bounce house.   Smoothly segueing into ‘Mountains,’ the Revolution displayed their versatility, transitioning from wall shaking funk-rock to the psychedelic R&B that is prevalent on Parade (1986). 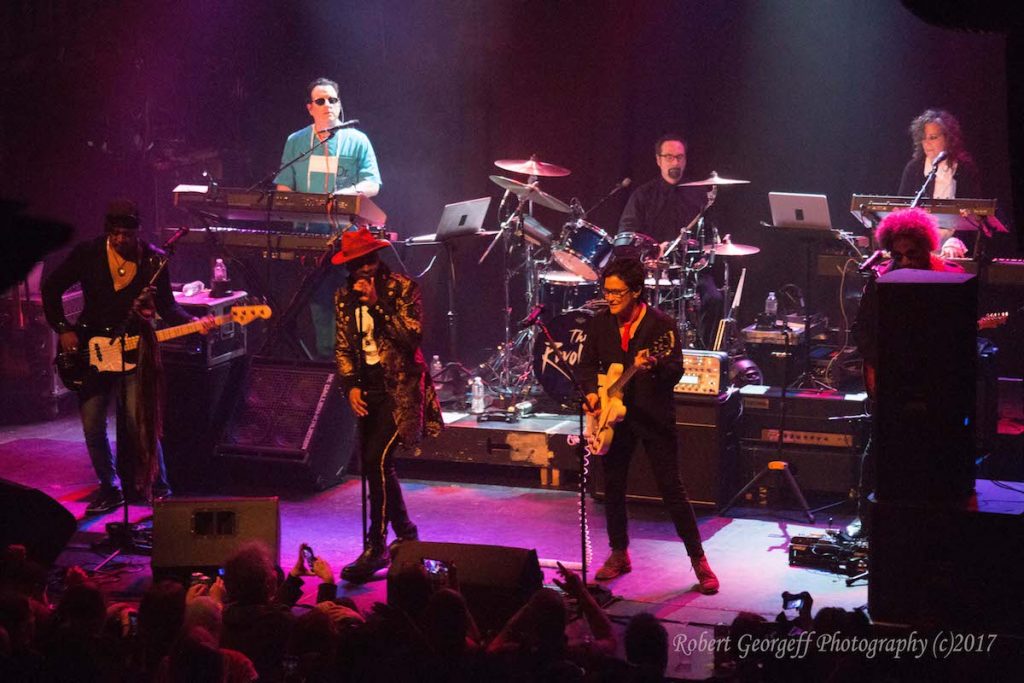 To close out the opening quartet of numbers that ironically cover the 4 studio recordings that the Revolution played on, they turned to the ultra-funky new wave of ‘Automatic’ (‘1999’ – 1982).   The floor was alive with movement as if it had been set on a seesaw balancing dancers grooving on both ends. 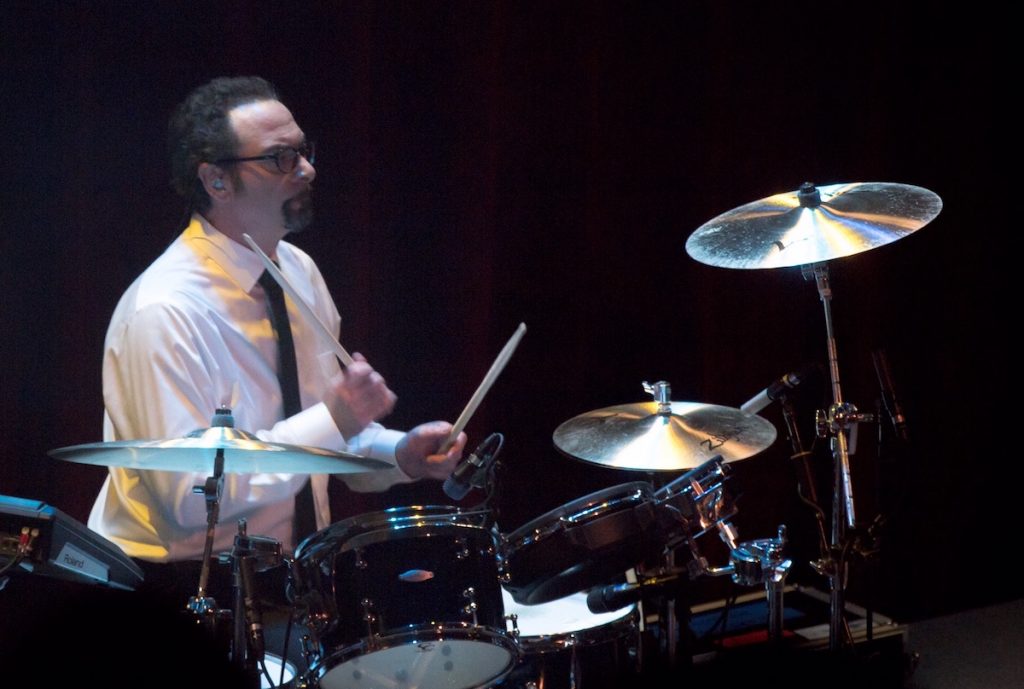 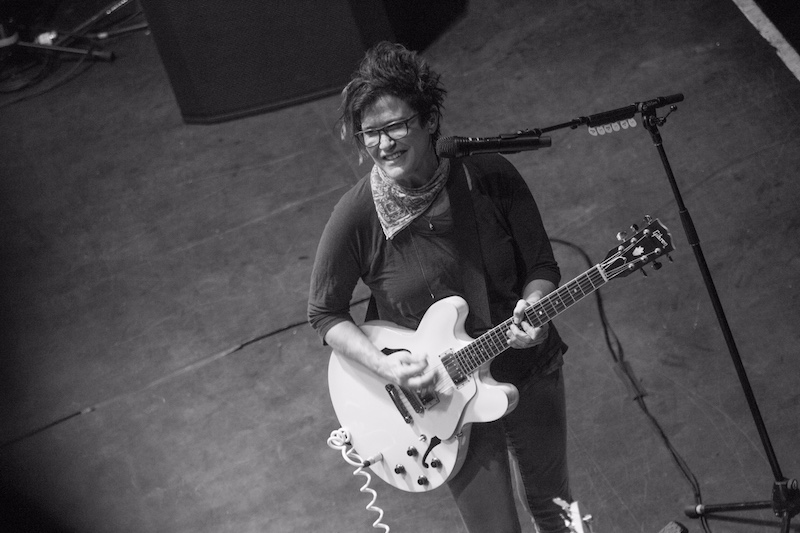 While it is undeniable that the show missed the firepower of arguably the best showman/musician of his generation, Prince’s influence was still greatly felt through his fabulous music and the vibe of the crowd. To help kick start some of the higher register falsetto tunes that were trademark Prince, singer Stokely Williams (vocalist / drummer of band Mint Condition – St. Paul, Minn.) came out and turned things up a few notches. 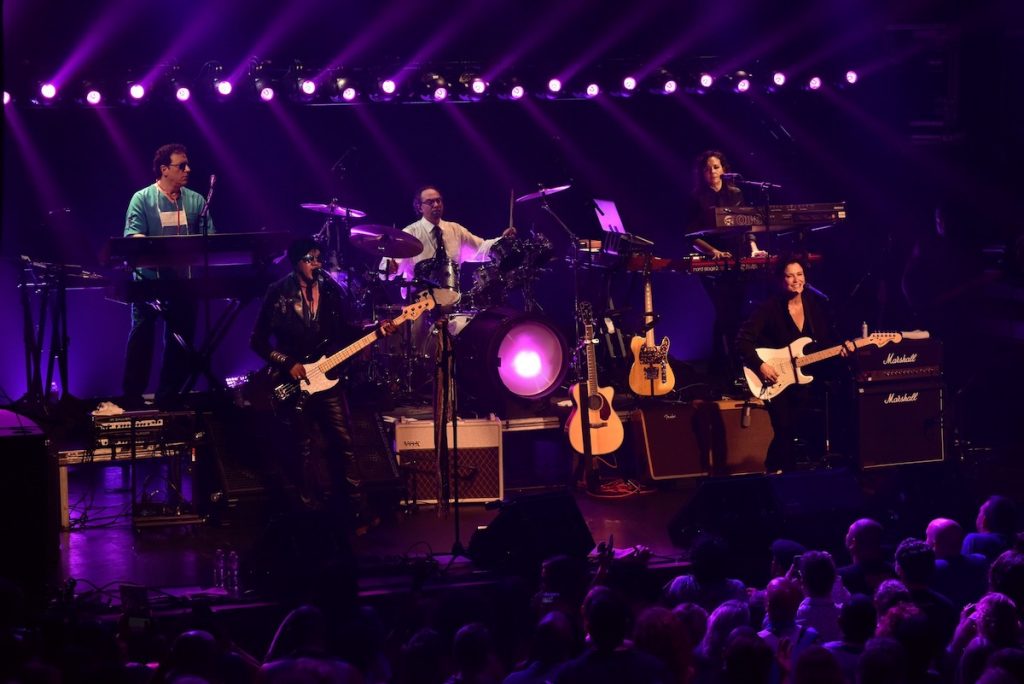 Perhaps it was the familiarity of having a front man to fire up the crowd that liberated the Revolution, but songs with Williams out front such as ‘Uptown’ (Dirty Mind – 1980), ‘Kiss’ (Parade), ‘D.M.S.R.’ (1999), and ‘When Doves Cry’ (Purple Rain) had a little extra electricity and particularly resonated with the crowd. To his credit, Williams did not try to mimic Prince with his dance moves or vocal style. He instead performed with his own flair while staying true to the music. 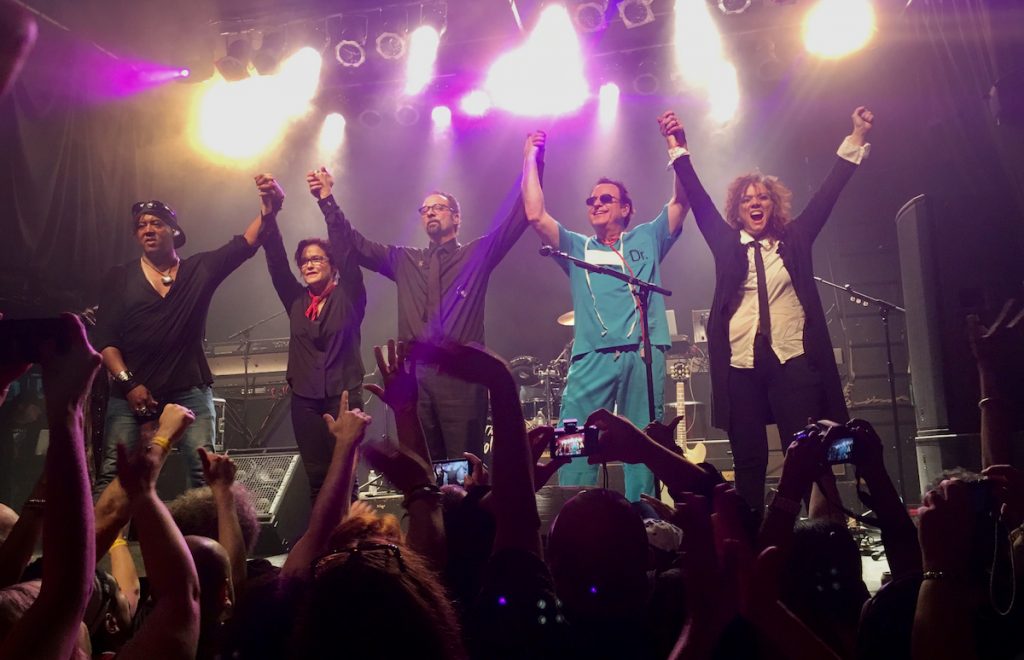 The most heartfelt moment of the evening of course was ‘Purple Rain,’ which was the closer of the regular set. With Wendy on lead vocals and guitar, the crowd backed her and the band with word-for-word vocals that served as a sort of farewell catharsis for fans to celebrate Prince’s music and mourn his passing.

After a brief break during which the crowd whooped (“oooh…ooooooh”) and frantically cheered, the Revolution re-appeared for ‘I Would Die 4 U’ and ‘Baby I’m A Star.’ Fittingly these are the same two songs which culminate the performance at the end of the Purple Rain movie. The performance brought down the house and sent everyone home on a purple high, clutching the beautiful show poster that the Fillmore is famous for providing, and hearing the purple funk echoing in their heads.