The Revivalists
The Outdoor Plaza at Harrah’s, Reno
May 25, 2018

As I was driving into a mountain storm on the ride up from Sacramento to Reno to catch The Revivalists at the start of their recent three-day Memorial Day weekend run on the West Coast, I had sudden a sense of deja-vu. A couple of years earlier, I had driven out to Santa Cruz during a storm to catch the fantastic New Orleans band at the Catalyst Club. That trip ended up being a memorable white-knuckle ride on the way there, with me and my Toyota Corolla barely escaping a rapidly flooding Highway 17, minutes before the road was closed overnight. 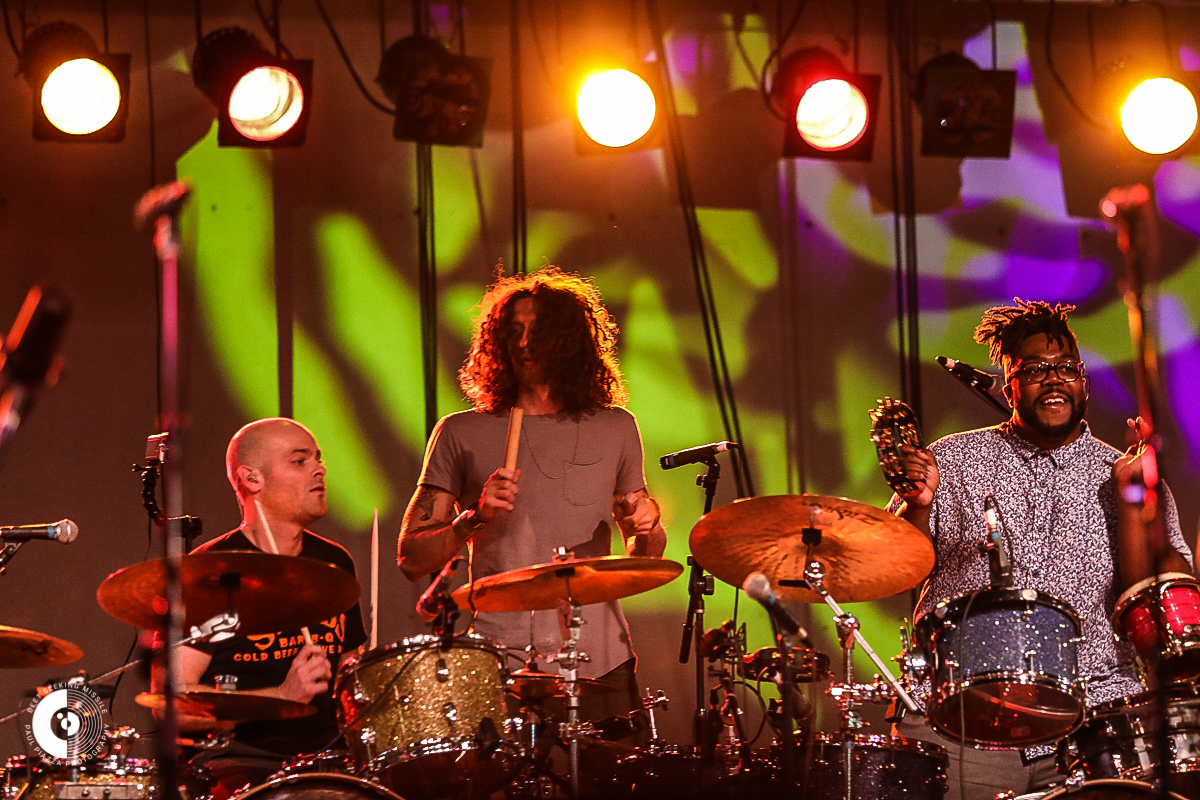 So naturally, the day before I departed for Reno, a man at the hardware store had warned me of the possibility of needing chains because it might snow on Donner Summit. I checked the weather multiple times as the hour of departure approached. Fortunately, when drive time arrived, none of that came to pass. The roads were wet and chilly, but easily navigable. By the time I arrived in Reno, all that remained of the storm were some gusty winds outside at Harrah’s modest-sized Outdoor Plaza. On the nearby stage, one of the best live bands in the country did their soundcheck in the strong breeze. 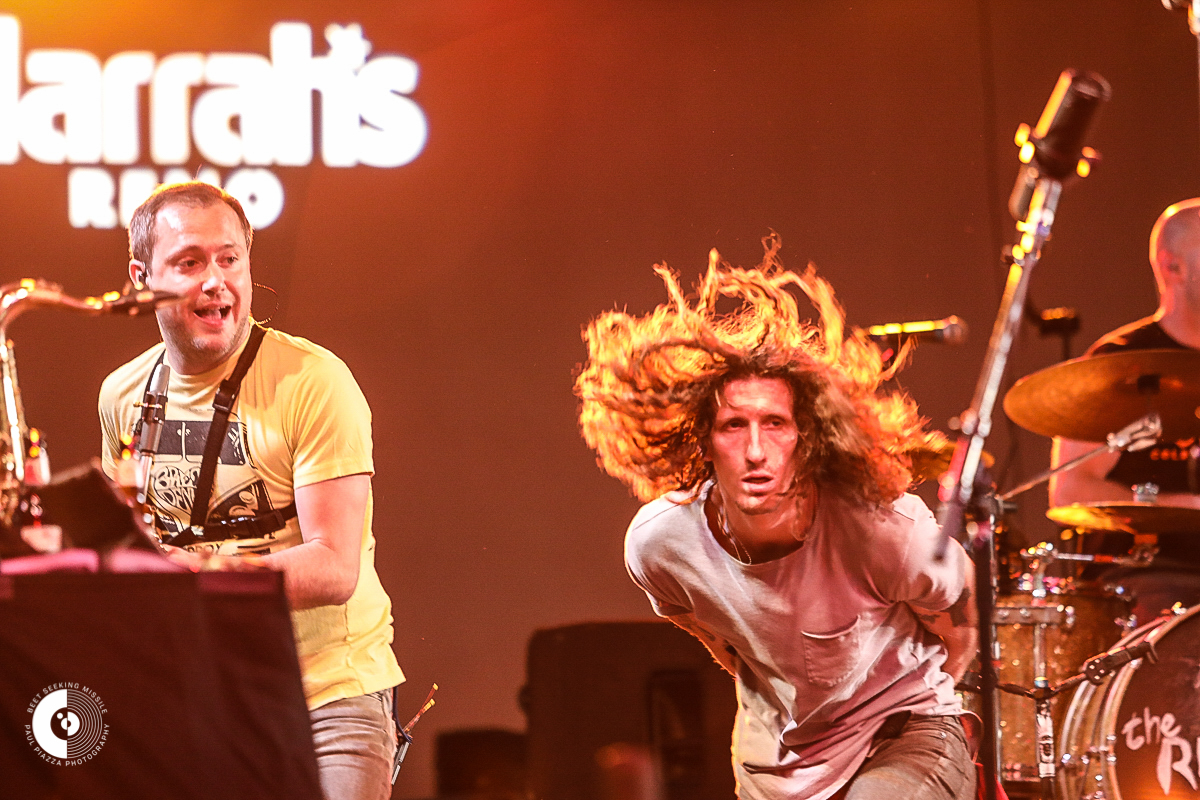 That memorable tune is from 2015’s excellent Men Against Mountains album, and the group has toured extensively since then in a variety of settings, from clubs to theaters to big radio festivals. However, this year the band has played barely over a dozen live dates, while focusing on their upcoming studio album. Thus, this Friday night show would be a good chance to catch the group as they were wrapping things up in the studio and trying out some of the new tunes as well as playing longtime favorites. And of course, it was a good chance to see these men in the mountains in the place they thrive – in the elements on an outdoor stage.

Since forming in 2007, the Revivalists have gained an ever-growing following by writing many good songs, but they take it to the next level as live performers. Their engaging, high-energy live shows bring their visceral songs to life. Led by vocalist David Shaw, whose sweet, raspy vocals and soulful lyrics, which occasionally take a dark turn, have a raw honesty and a stage personality that connects with fans square in the heart. Meanwhile, the current 8-piece version of this band remain a formidable beast that can create soulful swings that can accelerate, grind it out or get sensually fluid at all the right moments. Often, this happens all in one song. 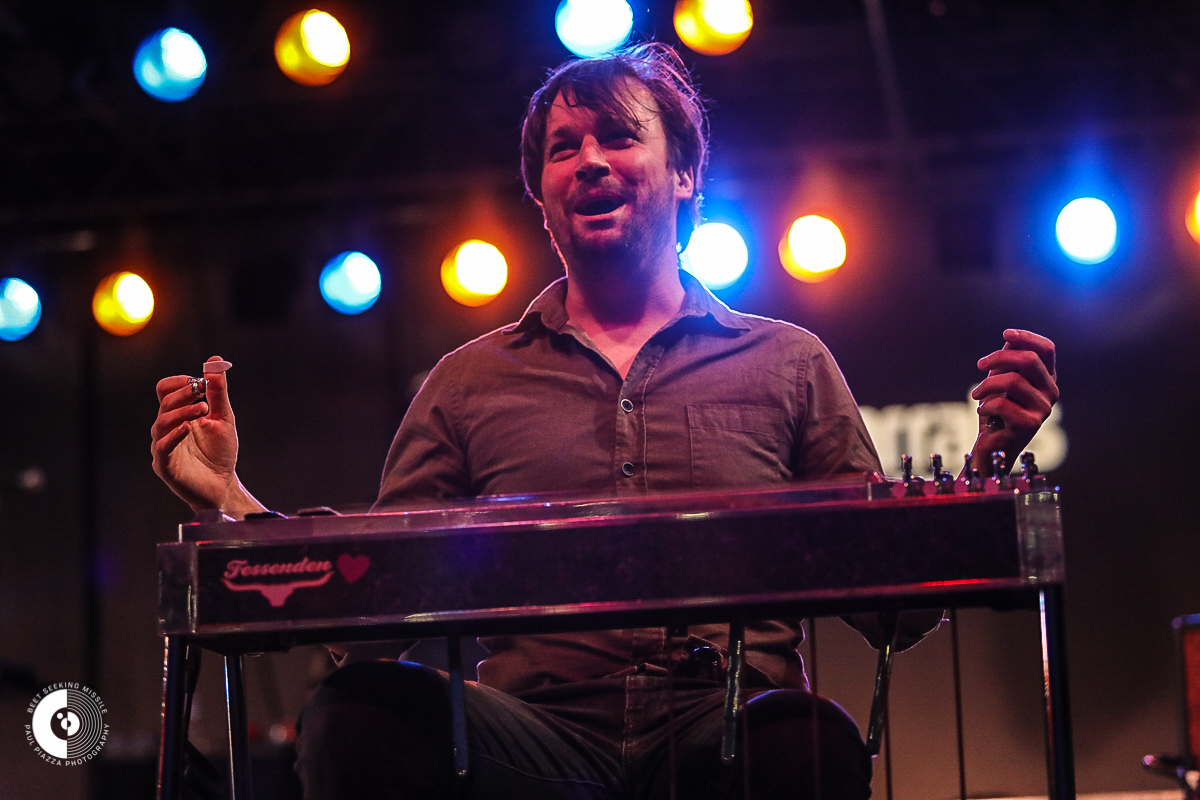 This potent charm was captured beautifully on the live second album, City of Sound, which is one of the better live recordings of the early century. It showcases a band that learned how to keep a crowd’s attention while they cut their teeth playing lengthy sets (some as long as 5 hours) up and down the Gulf Coast in their early days. Recently, the septet added percussionist PJ Howard (The Heard) to their touring ensemble, which adds another texture to their sound. Howard was with the group in Reno. Ironically, on this night, Michael Girardot-(trumpet, keyboards), was absent due to a wedding commitment.

Since they’ve been so good for so long, the group has amassed a dedicated following of diehard fans who call themselves the RevHeads. And naturally, on this evening, many of these folks were in attendance. A few of them showed up for soundcheck. Some of the fans I met before the show had come from two or three states away to see the band. More than a few of these RevHeads, most of whom were posting up on the rail, mentioned that after this show, they’d be heading to The Masonic in San Francisco the next night and to Bottle Rock in Napa on Sunday as well to complete a weekend trifecta. They are dedicated folks. 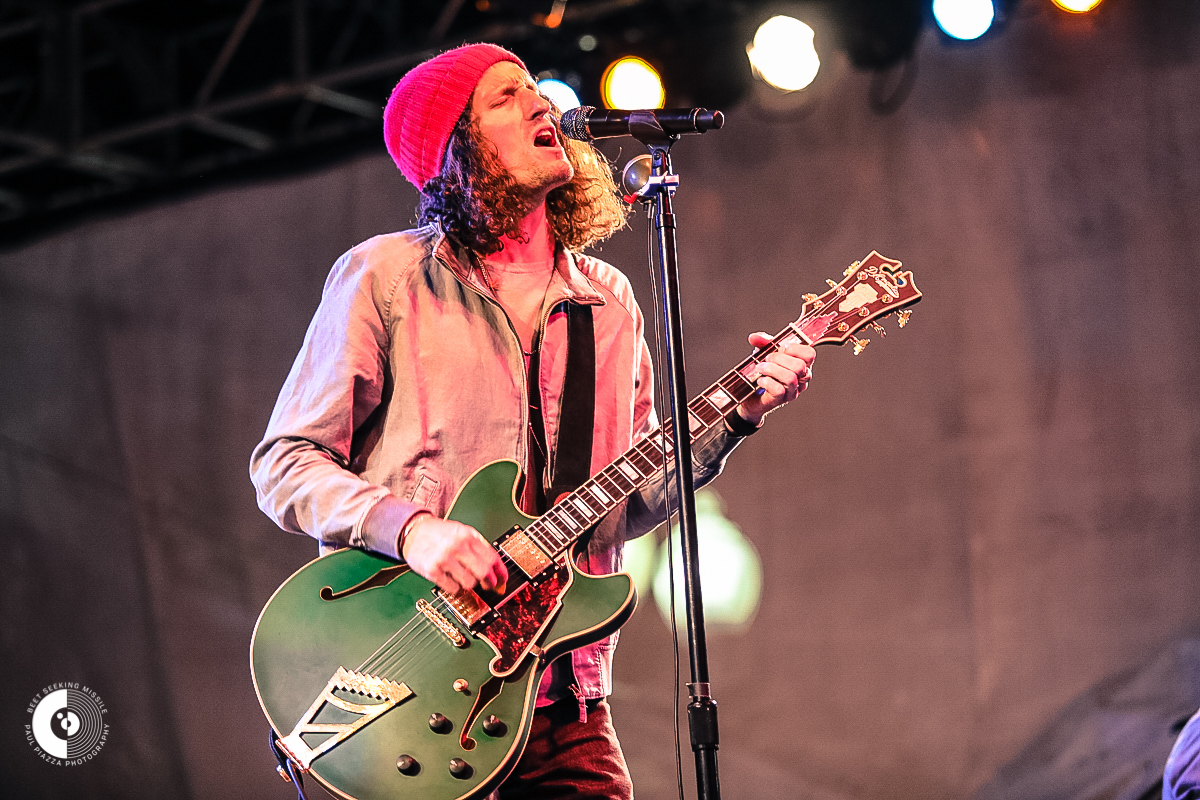 As we all settled into the outdoor venue, which is nestled in downtown Reno, one couldn’t help but notice the runway that went from the stage to the rail. This was a hint that Shaw, who is no stranger to dipping and dabbing into the audience, might be dropping in for a visit or two. Needless to say, he didn’t disappoint. During the band’s opening number, which happened to be a great new song with a sticky guitar/bass riff called  “You and I,” Shaw danced right onto the walkway from the start, which made sense since the first lyric of the song is “Feet Don’t Fail Me Now.” Next, he hopped off the platform into the pit, working the crowd and getting them to sing along the catchy sing-song chorus, which all of the already RevHeads knew. Immediately, everyone else understood what kind of night this was going to be in Reno.

The band members, including Zack Feinberg-guitar, Rob Ingraham-saxophone, Ed Williams-Pedal steel guitar, George Gekas-bass,  and Andrew Campanelli-drums, are all sensational players and performers and Howard meshed right in with them seamlessly from the start. Along with the additional percussion, there was a second drum kit onstage. 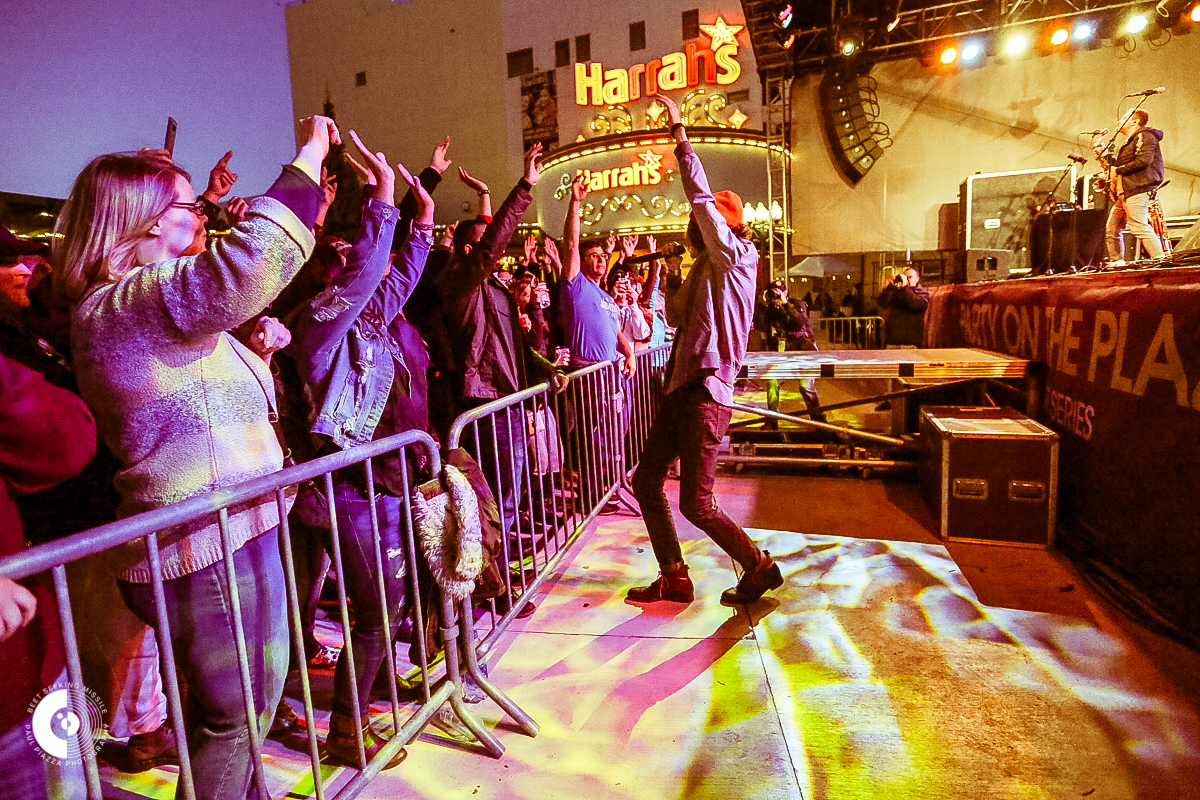 During the night’s second tune, the band slowed things down a little with Shaw on guitar as the band launched into the spellbinding “Amber,” which winds around in a funky way before building to a big crescendo. Next, they played another solid new tune called “When I’m With You.” As this went on, the night got cooler and the band got hotter and gave the songs some nicely extended jams. The audience, fueled by all of this, huddled closer to the stage and fed off the energy of the all of this and the band seemed to feed off of that in turn.

The first set ended with fireworks. There was an extra-large version of the excellent “Hurricane Winslow,” on which Howard sat in on the second drum kit and he and Campenelli just crushed it. The band stretched out the Allman Brothers-like jam near the song’s end, hitting all the satisfying notes. They finished with “Catching Fireflies,” which featured some savagely sweet pedal steel work by Williams.

For the first encore, Shaw and Feinberg came out and started an acoustic version of another new song “Shoot yYou Down.” Prior to starting the tune, Shaw spoke to the crowd about the need for more talk about gun violence. “When this is all over, I want to be on the right side of history,” said the singer. The plaintive new tune, which has the line “Can we for once, just live with no guns,” went down well with the crowd, and the whole band eventually joined in.

Afterwards, they finished with a tasty triple whammy of tunes. During the raucous up-tempo slamming of “All In the Family,” the band had the whole joint rocking hard and Shaw joined Campanelli and Howard for a jam on percussion. During “It Was a Sin,” Ingraham ventured onto the runway and wielded his mighty sax. For the finale, everyone in the outdoor venue, along with what felt like most of downtown Reno, sang along to an extended version of “Wish I Knew You” before the band finally called it a night. 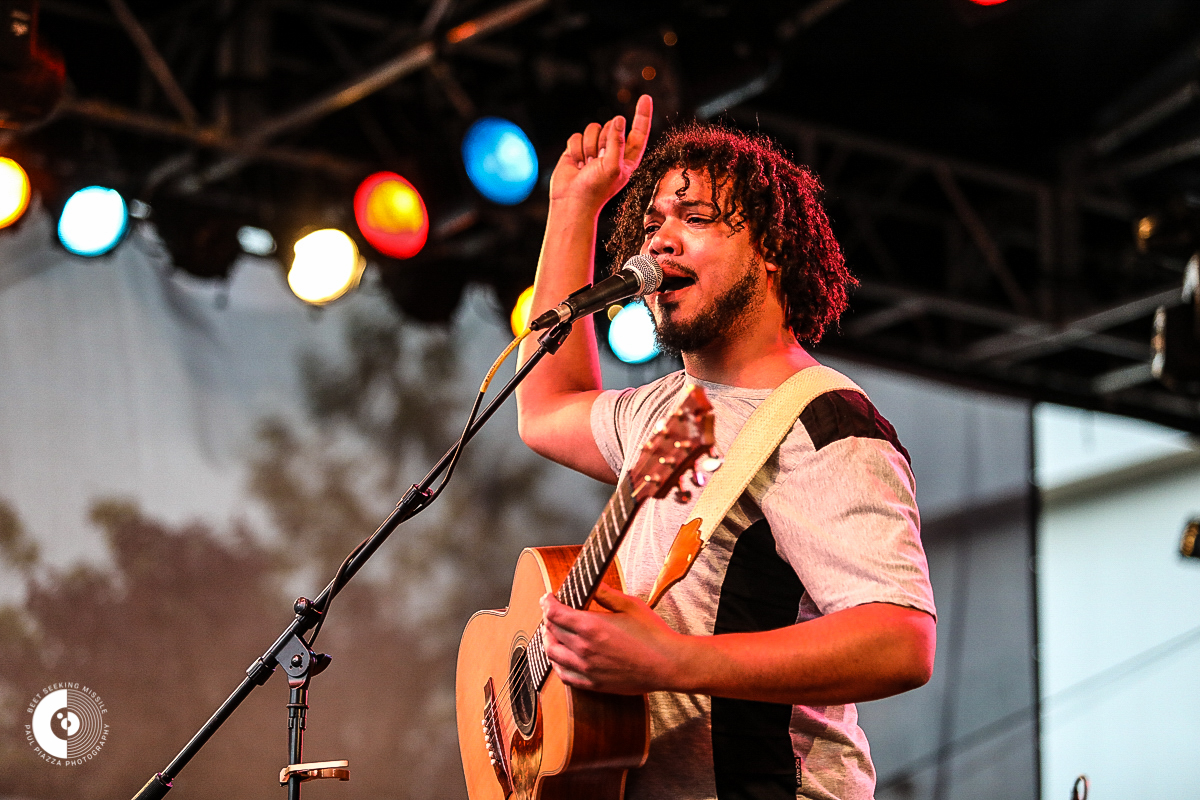 Earlier in the evening, Ethan Tucker and his band had opened the show with a set of acoustic roots music that was both soulful and bluesy. The Olympia, Washington native has evolved into a solid performer, who is often seen on the reggae festival circuit. He also opened for the Revivalists at the Masonic and was part of the Bottle Rock line-up.

For the remainder of the weekend after the show, Northern California was the picture of nearly cool perfection as the Revivalists continued their three-day run onward to San Francisco and Napa. Meanwhile, back on the Gulf Coast, residents were besieged by Alberto, the first big subtropical storm of the year before it moved northward. But on this Friday night in Reno, we danced in parkas to the Revivalists for the final time before the start of summer.

Find out more about The Revivalists here.

Get all the info Ethan Tucker on his website.