The Revivalists
The Fillmore
February 10, 2017

All photos by Paul Piazza

Leading up to their sold-out headlining gig at the Fillmore last week, everything was lining up pretty damn well for The Revivalists. The hard working New Orleans band, who have earned their rep by playing every show as if it were their last, are on quite a roll these days.

Last fall, their song “Wish I Knew You,” from their excellent 2015 album Men against Mountains, had topped the Adult Alternative Songs chart. Suddenly the venues they played were getting bigger, their fanbase was swelling to new levels and they were making the rounds playing the song on television talk-shows like The Today Show, Conan, and Ellen. Naturally, they responded to all of this by hitting the late-winter roads with a renewed vengeance.

Of course, none of this came easy and certainly not without great sacrifice and dedication. Since forming in New Orleans in 2007, the Revivalists have steadily risen the ranks from NOLA clubs, to the festival gigs across the nation on the jam circuit, to carving out a regular presence at Jazz Fest. Much of this was due to their live shows, where the band combines their stellar chops with an engaging stage presence. But they also dropped a killer album in 2010 called Vital Signs. Along the way came a few more nuggets, including the great live record City of Sound, in 2014 before releasing Men Against Mountains in mid 2015.

Every night they take the stage, they roll up their sleeves and go to work. And with front man David Shaw, the band have a unique human who has an intuitive ability at establishing special connections with audiences everywhere the band goes. 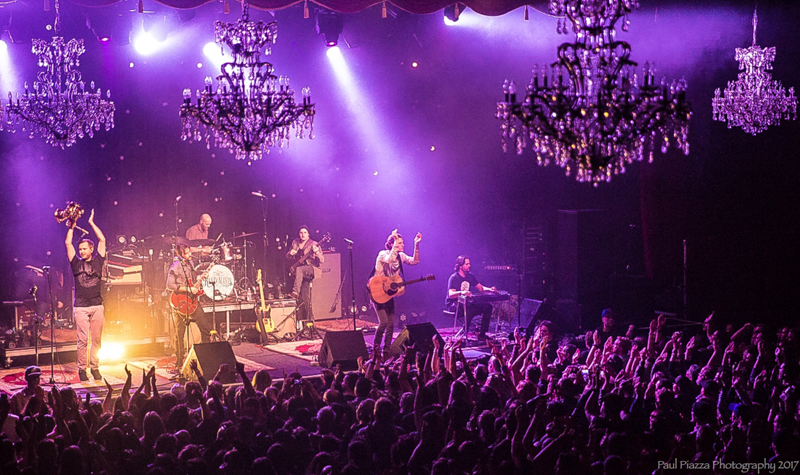 The RevivalistsThey also have a devoted and ever-expanding group of followers called RevHeads who lovingly follow the band’s moves. On the band’s recent Northern California run, many of these folks could be seen taking in shows at any number of venues from Santa Cruz to Lake Tahoe. Perhaps that’s why one of the band’s most valued merch item is their beer koozie, which honors the fans because it’s covered in images of RevHead license plates.

So on this special night at the Fillmore, the band’s first time headlining the legendary room, they came out swinging. They opened with “Stand Up,” a song that is literally about slugging it out while facing life’s inevitable setbacks, made all the tougher by starting out behind the eight ball in the first place. It starts off with the line “And I should’ve been murdered by now…”

“Stand Up” encapsulates the Revivalists vibe, which explores the small joys and big loves in life as well as the inevitable fuckups and the darkness that lurks near the edges. Nothing is easy in this world. Nothing is gained without a fight. And you always have to fight for what is right.

Needless to say, from the get go this band had the ghosts of Fillmore shows past smiling with a sound which puts a Crescent City spin on rhythms that expand the palette of the every day music goer. This was good because there were a lot of first-timers in the crowd and many left the venue overwhelmed by the band’s versatility. And on this rare night, Shaw did not let release his massive curled mane, which happens more frequently than not. Whether that was planned or not, it really didn’t matter, because although the hair was constrained, the band let it all go and slammed the Fillmore crowd upside their heads with the force of a two-ton wrecking ball all night long. Naturally, the audience reveled in every moment of it.

With a foundation built on roots rock, soul, and funk, the band explores a milieu of musical directions and throws down with ferocity, often all in one song. After hyping up the room with “Criminal,” which is a long-time fan favorite, the band slowed it down with “Monster.” This song builds up with moody anticipation before rocking out at the end.

The same could be said later in the set when they played “Need You,” which creeps along paced by an elegant horn line, has a little implosion of psychedelia, then quiets down for a gentle trumpet/steel pedal duel at the end. This was followed by “Bulletproof” which starts off with a piano bounce and winds into a luscious soundscape before rocking out like a mofo during the chorus.

It was a well-paced show, with the band in fine form. Ed Williams on the pedal steel guitar commands the stage on one end with power, finesse and the occasional smile, while saxophonist Rob Ingraham holds down the other side with so much joy, he literally bounces and spins for a fair amount of the set when not playing his ass off. Next to Ingraham is keboardist/trumpeter Michael Girardot, who in baseball parlance, would be a five-tool player. He sings quite well and provides energy, spirit, and the occasional tambourine slap from his stronghold.

The rhythm section of bassist George Gekas and drummer Andrew Campanella are quite extraordinary as well, since they steer this animal all over the place, all the while keeping it on a tight leash with a loose feel. Guitarist Zack Feinberg is a six-string sentinel beast, holding his place in front of Campanelli. Feinberg had many great bursts on guitar, but it was also terrific to hear him picking acoustically during a stunning rendition of “King of What,” which featured Shaw, Ingraham and Girardot on a three part harmony. Simply beautiful.

By the time the band wrapped a little after midnight with “Wish I Knew You,” after a nearly two-hour set, the crowd was whipped from the euphoria. So naturally, the band took it to another level and rocked out a little extra hard at the end. Hard work pays off. People left the venue buzzing about the show with a nice Fillmore poster to commemorate the night.

Opening on this February evening were Magic Giant, an incredibly energetic band from Los Angeles. They are led by vocalist Austin Bis, who was all over the place during the band’s set. Zambricki Li is somewhat of a phenom on banjo and fiddle and he was bounding all over the stage as well. Might as well add that guitarist/cellist Brian Zaghi was doing the same with shamanistic flair. They were basically a super-jolt, of highflying sounds, big drums and big sounds. One of their best moments was when Bis and Zaghi paired up for a banging percussion duel. Their song “Set On Fire” has been getting a lot of listens and views and it pretty much describes what their set just happened to be. They play excellent music while it appears at any moment they may veer out of control. Look out for them in the future.

For more information on The Revivalists, check out their website.