The Residents made a grand return to their hometown of San Francisco for two nights of spectacular sold out shows at The Chapel. This incredibly unique experimental band with an immense underground following has opened the minds and captivated the wonder of many fortunate souls for over 45 years now and continues to prove their ambitious notoriety in having endless creative music and artistic innovations. Now on a generously lengthy tour, they bring their one of a kind show to smaller venues perfect for intimately exquisite experiences. 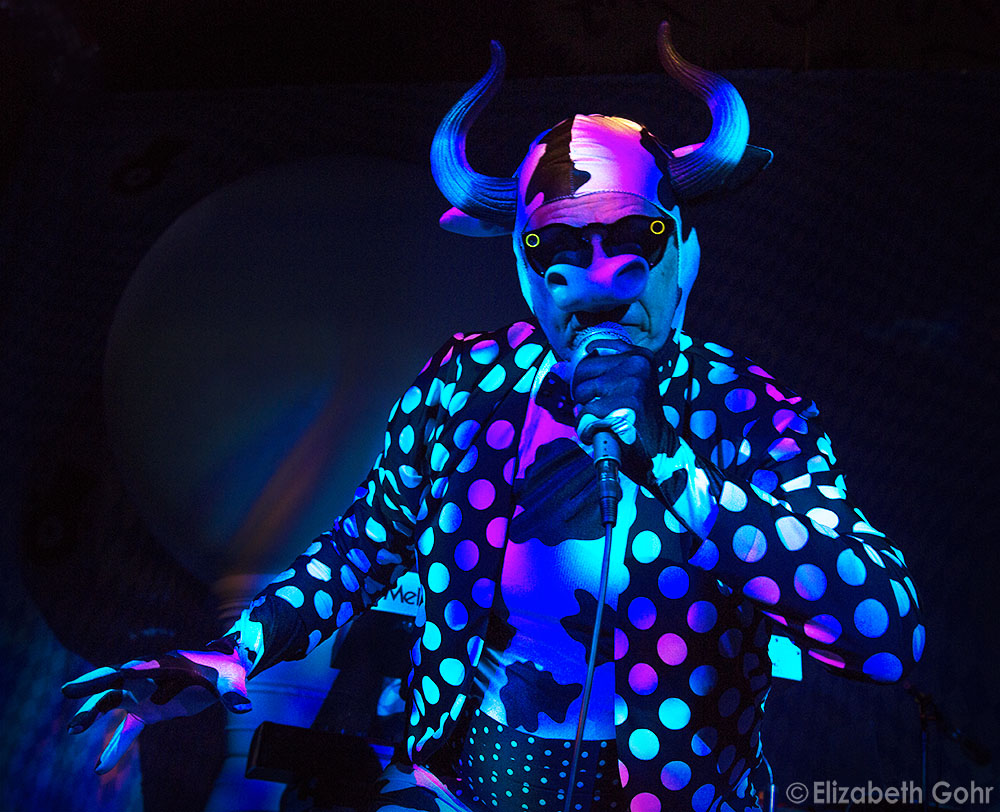 Aside from their massive catalogue of albums, multimedia projects and videos, every tour from The Residents conveys new conceptual ideas and storylines. They also have a genuine approach to their art by keeping their identities unknown and preserved in anonymity which allows new characters to emerge and stories to evolve throughout their very rich history of jaw dropping and mind melting performances. 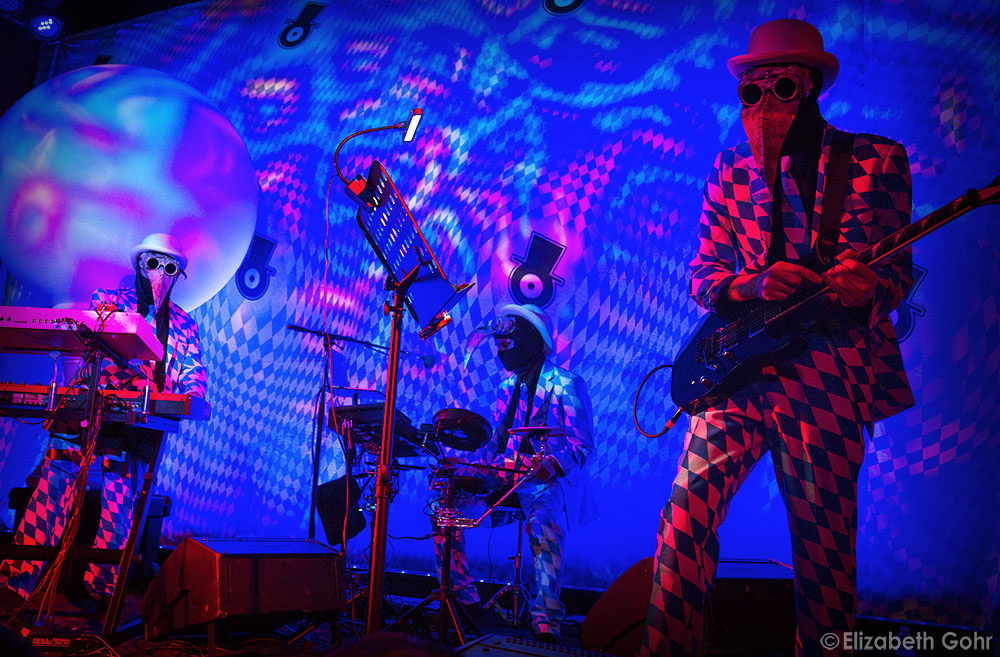 This show in particular presents the In Between Dreams tour featuring a cow-clad fellow by the name of Tyrone on vocals and harmonica with the rest of the band wearing plague doctor masks perched under white bowler hats and dressed in blue and white checkered suits amidst a matching backdrop. Here we have Eekie on a Jackson guitar, possessing his own voice through the instrument and exhibiting unique sounds by using an ebow, slide, finger tapping and consistent application of the whammy. Then we have Erkie on the keys and synth offering his range of harmonics and effects to create charismatic melodies. And then there is Cha-Cha on the electronic drum kit, contributing backing vocals and his array of tantalizing beats obscured through programed synth pads of every percussive sound possible. 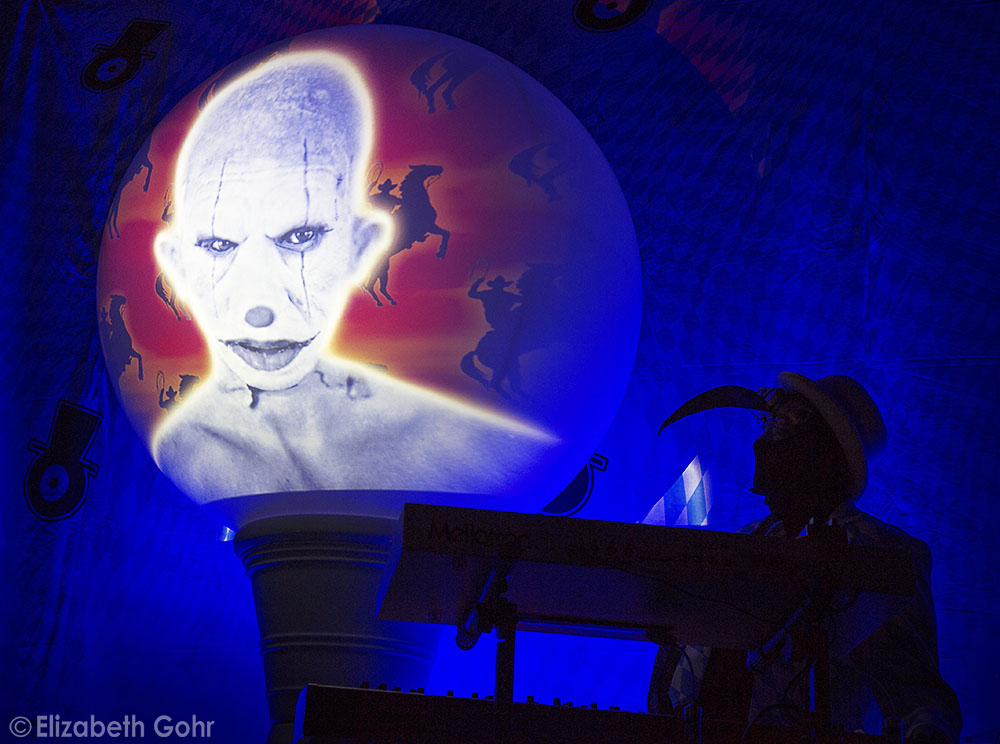 Part of the beauty in witnessing a Residents performance is the sensory overload from the live experience. They have the grand ability to remaster and rework their archive into fresh takes that never sounds like the studio version, only emulating their true lyrical essence. While keeping the listener engulfed with such interpretations, the abundance of lights and color always compliment the mood and present a visually stimulating atmosphere. Also diving into the subconscious, storytelling about dreams are incorporated in between sets of songs spoken from animated figures such as John Wayne and Richard Nixon that are projected on a white globe providing humorous and dark interludes. 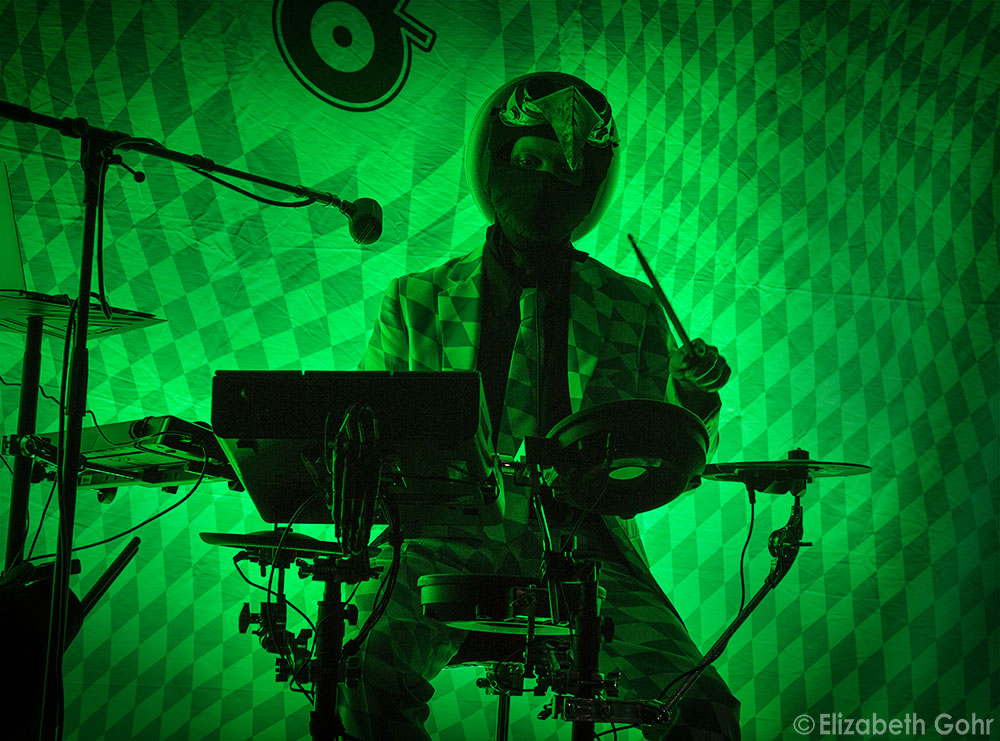 This well-constructed setlist included songs from the past, the present, and the future. Immediately the crowd was introduced to an auditory whirlwind of dark psychedelia with a few songs from their Freak Show album. A classic cover of James Brown’s “Its a Man’s Man’s World” emitted extremely powerful vocals from Tyrone and matching howls from Eekie on the guitar. There was also a set of songs off the recent album released last year, The Ghost of Hope, that featured the preview single “Rushing Like A Banshee” backed by energetic beats from Cha-Cha and “Train vs. Elephant” that had a very esoteric language transmitted from Tyrone along with audio of a simulated train wreck colliding with an elephant as the song faded out. 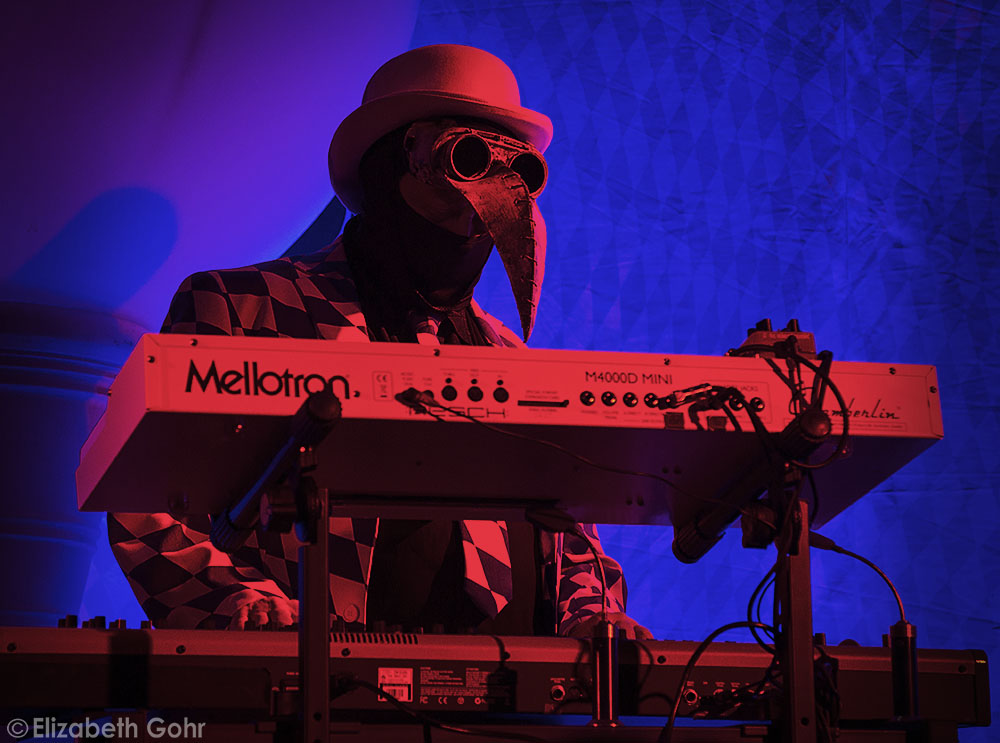 To much surprise, the fans got the pleasure of hearing three brand new songs that will be on their upcoming album entitled Intruders: “Hungry Hound” and the song “Tell Me” featured Tyrone on the harmonica and new song “Die! Die! Die!” demonstrated dark lyrical intensity with growling vocals paired with Erkie’s eerie organ tones. The song “Africa Tree” was an intriguing instrumental conversation amongst the band and closing the set was “Tourniquet of Roses,” generating a march like rhythm with layered looping of vocals towards the end as each member humbly left the stage. The encore featured a haunting cover of the Hank Williams song, “Six More Miles (To The Graveyard),” with hair-raising note bends on the guitar, unearthly harmonica wails, and grim train noises echoing in the background. 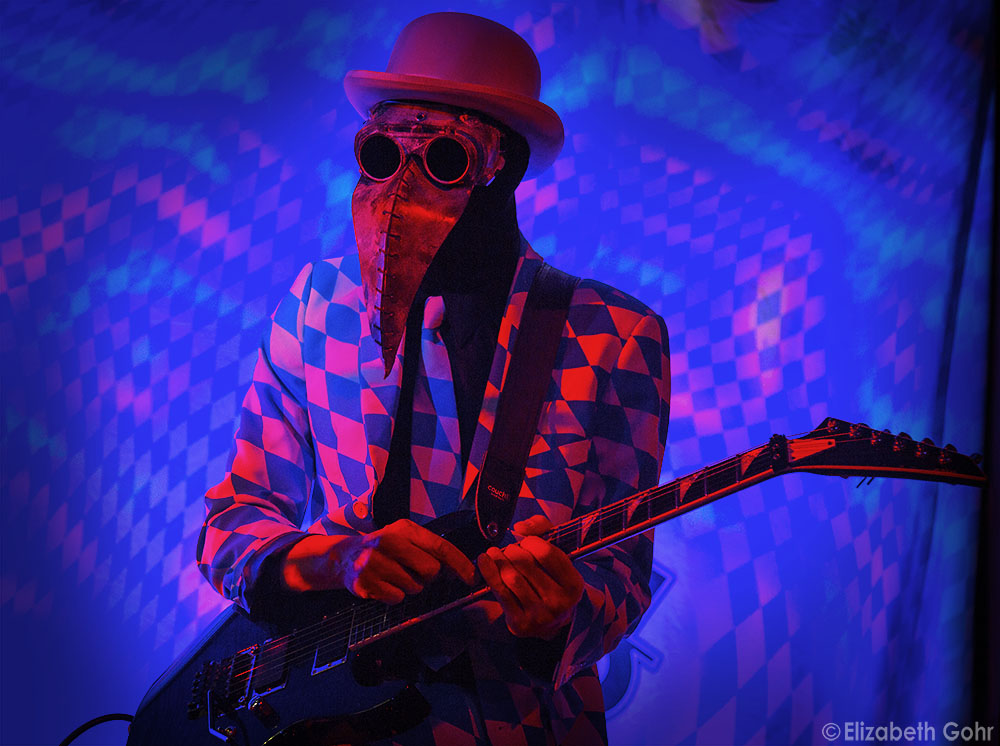 A fascinating notion about The Residents is the subtle symbolism portrayed in these well thought out concepts, allowing the fans to piece together a deeper meaning to it all. The checkered pattern used to adorn the stage also resembles the same pattern on the Bavarian flag. An early collaborator with The Residents was a mysterious Bavarian composer by the name of N. Senada who also formulated The Theory of Obscurity, in which a documentary released about the band bears the same name. This theory, so to say, became a backbone which the band grew upon; it states that pure art can only be produced when the influences and expectations of the outside world are not taken into consideration. Such aspiration of attaining this purity emerged as true originality, and that’s exactly what sets this band apart from the rest. 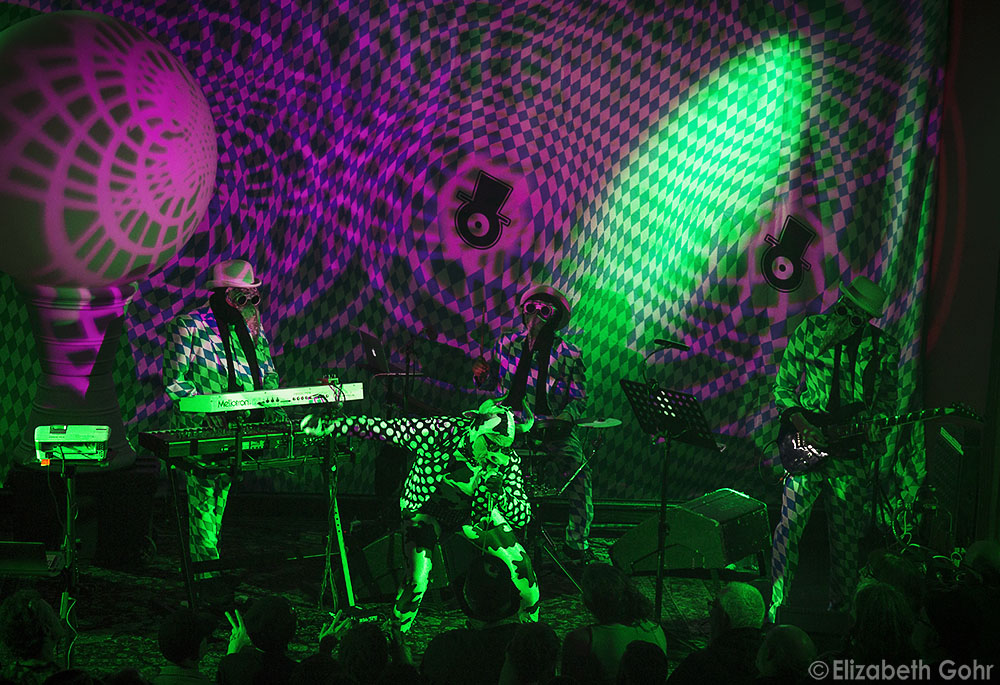 SF Sonic had a chance to catch up with the manager of the Cryptic Corporation, Homer Flynn and relay a few questions from The Residents’ rather large fanbase on social media. 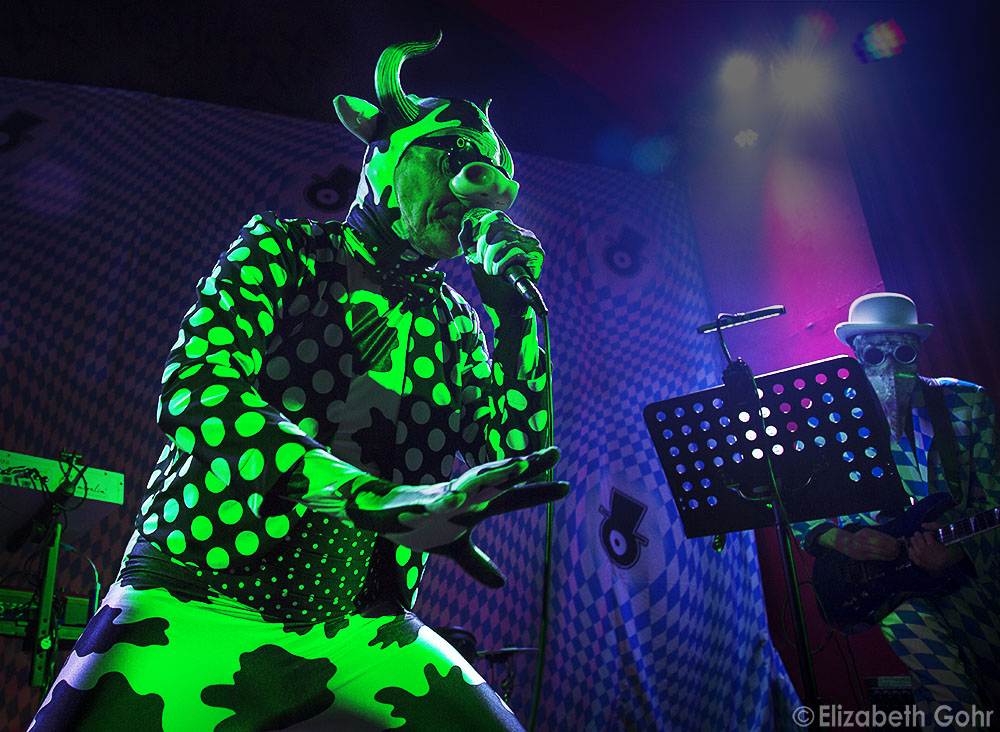 Frenesi Gates from Pennsylvania was wondering, “Which major releases will be the most difficult to release pREServed editions of?”

Flynn: “Once Residents’ recording went digital, which would be Freak Show, artifacts and additional recordings became more rare. There may be some extra material for some of those releases but probably not much that hasn’t been released one way or another.”

Another fan all the way from Australia inquired, “Any plans to release more pre-Residents material now that The Warner Bros Album is being officially released?”

Flynn: “Assuming that the Warner Brother Album gets a decent reception, I expect Baby Sex will follow but it does present an, uh, objectionable packaging problem as well as a less than wholesome title. But hopefully we’ll find an equally unsavory solution for that. I think Cherry Red is also considering a very limited two LP set of a lot of the early material, but nothing has been decided yet.”

Find out more about The Residents here.