Sleep, the extremely influential and incredibly heavy band hailing from San Jose, induced a communal state of transcendental meditation for a crowded house of rockers at the Warfield Theater on Friday night. Founding members Al Cisneros (bass/vocals) and Matt Pike (guitars), were joined by drummer Jason Roeder (Neurosis), as Sleep awoke from its hibernation to blow away the Market Street venue with truckloads of heavy handed riffage and gargantuan volume.

Underground guitar hero Matt Pike, taking a brief break from his High on Fire tour, joined Cisneros in reaching back to the now mythic roots of Sleep (which first started assaulting bay area stages in 1990). The result was an evening in which there were fans who were simultaneously head banging and nodding off….both appropriate salutes to the hypnotic musical powers of Sleep.

Opening to a cacophony of yells, “oh yeahs!!”, and howls, Sleep lurched into the ominous first notes of ‘Holy Mountain’ (Sleep’s Holy Mountain – 1992). Pushed by the by the increasing tension of Pike’s sludgy guitar attack and the slow pound of Roeder’s bottom-heavy drum shuffle, the crowd lit up as an avalanche of Sabbath / St. Vitus drenched volume rained down.

Cisneros then weaved in his overdriven bass, and creepy whine to complete the aural landscape, painting a picture of doom that stirred the crowd into a stomping circle of bodies. Suddenly the volume broke and there was a calm in the middle of the song…like a calm of black clouds gathering together after a storm breaks. Gathering its energy and weight before exploding again in a maelstrom of down-tuned guitars and quaking percussion.

That’s the way Sleep operates. And for the many in the audience who have experienced it before, it was something to behold to see Sleep in their element. Thick and brooding as ever…rolling through anything that may get in its way like a black expanse of stoner fog. 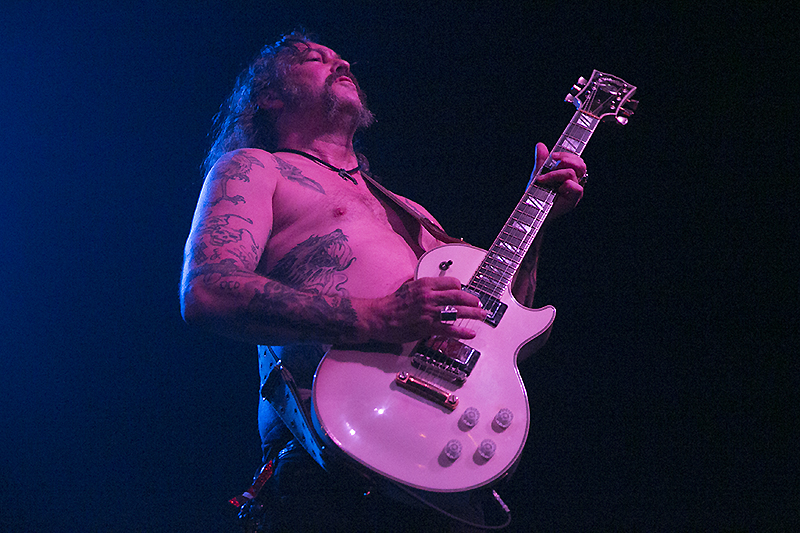 Next up was something that most of the fans likely had not seen before. In 2014 Sleep released a single called ‘Clarity’ for Adult Swim, and for many seeing the band spread its wings and perform a new track was like finding $20 in your coat pocket that you forgot was there. That $20 bill pummeled the crowd with a nearly 10-minute opus of dense volume….head banging and nodding out abounded.

The over 90-minute set was quintessential Sleep, complete with plenty of sweat, a few minutes of audio issues, and of course the shirtless high priest of stoner metal guitar Matt Pike (he is shirtless more than Matthew McConaughey) wailing away.…sometimes on a 9-stringed guitar.

Ending the exhaustingly satisfying evening, Sleep decided to take it easy on the crowd and play a nice lullaby to send folks on their way. That lullaby was delivered in the form of ‘Cultivator’, the final movement of Dopesmoker (2003). On cue, vapes and pipes were brandished, and the Warfield was awash in the smoke of the holy leaf…the perfect way to end the set.

Sleep is a true pioneer of the stoner/doom movement that has grown, well…like a weed. Despite rare and sporadic releases of new music, infrequent live performances, and little if any mainstream media support, Sleep have become an amazingly influential phenomenon, inspiring scores of like-minded connoisseurs of apocalyptic, astrological, deep space heaviness to spawn like fledgling dragons all over the globe.

Opening for Sleep was Helen Money (aka Alison Chesley), an accomplished classically trained cellist from Southern California who has worked with some of rock music’s most notable underground acts (Disturbed, Anthrax, Russian Circles).

Money set the tone for the night performing dark, moody soundscapes that enthralled the crowd. Working her cello through various effects, she scraped, plucked, and pounded the strings to fill the Warfield with haunting rhythms that bring to mind the barren raw orchestration of Tool. ‘Rift’ and ‘Become Zero’ were particularly effective numbers that rocked the crowd.

Setlist: Holy Mountain | The Clarity | Dopesmoker | Dragonaut | Aquarian | The Druid | From Beyond | Cultivator