Metal fans were treated to a high-energy show on Sunday night as Anthrax and Killswitch Engage both brought their powerful sonic attack to a sold-out crowd at The Fillmore. 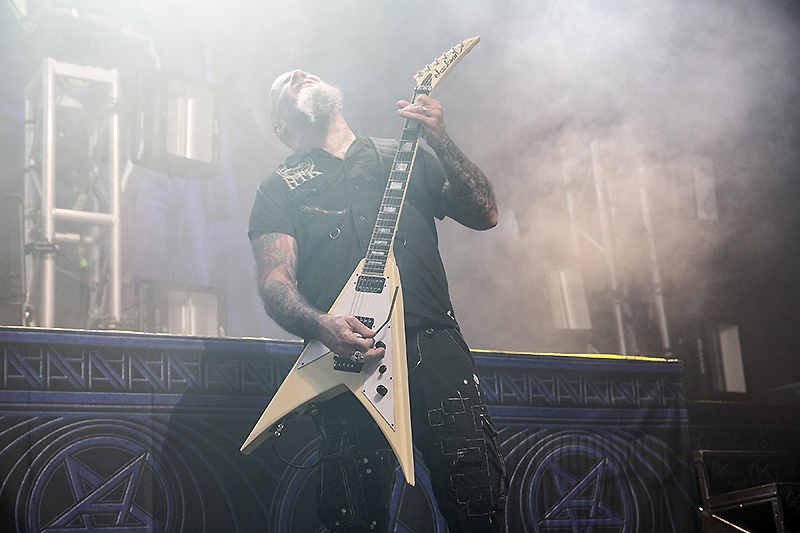 Anthrax played an energetic and upbeat set, packing in plenty of classic songs along with a few newer ones from their two most recent albums: Worship Music and For All Kings. 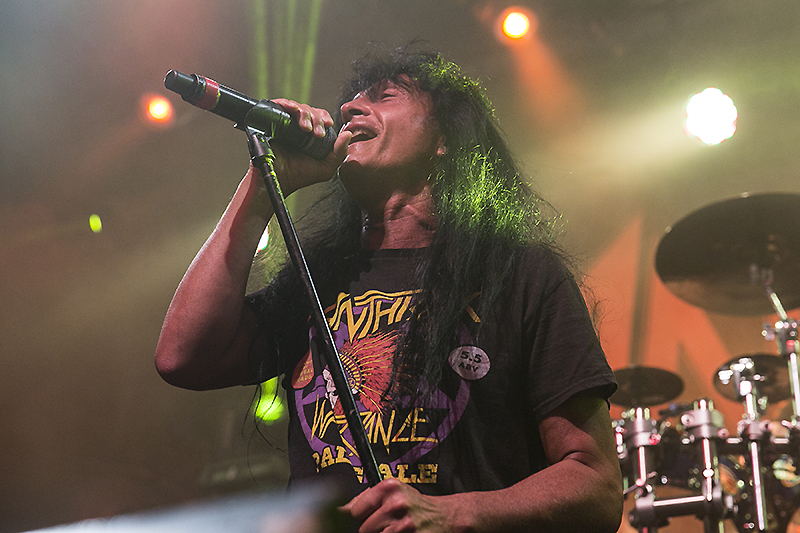 They opened with the stomping “Among the Living,” a blistering slice of thrash metal that whipped up the crowd and got the circle pit moving at maximum speed. Lead singer Joey Belladonna sounded incredible on this track, nailing a set of high flying vocal lines that melded perfectly with guitarist Scott Ian’s throaty backup vocals. 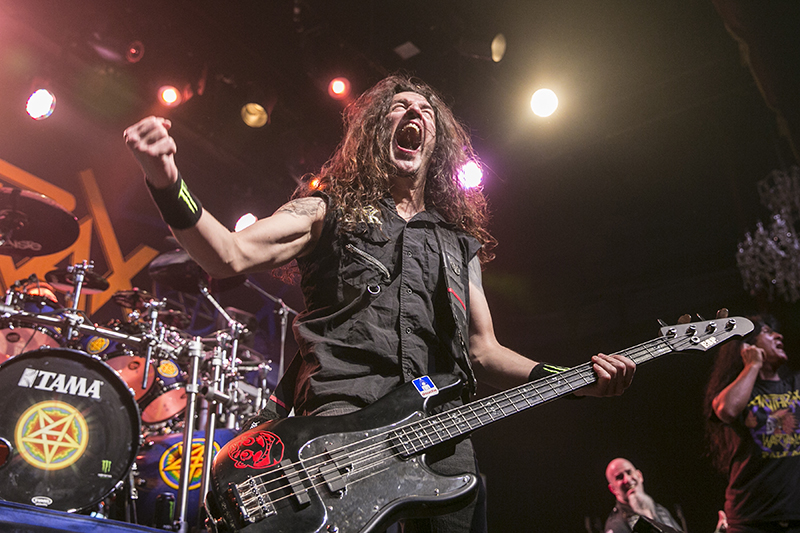 Immediately following this the band launched into another killer song, the awesome “Caught in a Mosh.” Driven by Frank Bello’s aggressive bassline and Charlie Benante’s precise drumming, the song simply thrashed from start to finish. What makes an Anthrax show so captivating is the energy they give off; whereas many metal bands are content to stand there looking tough or evil, Anthrax are driven by pure fun and enthusiasm. There was seldom a letdown in intensity during the remainder of their set, as they packed on thrasher after thrasher. 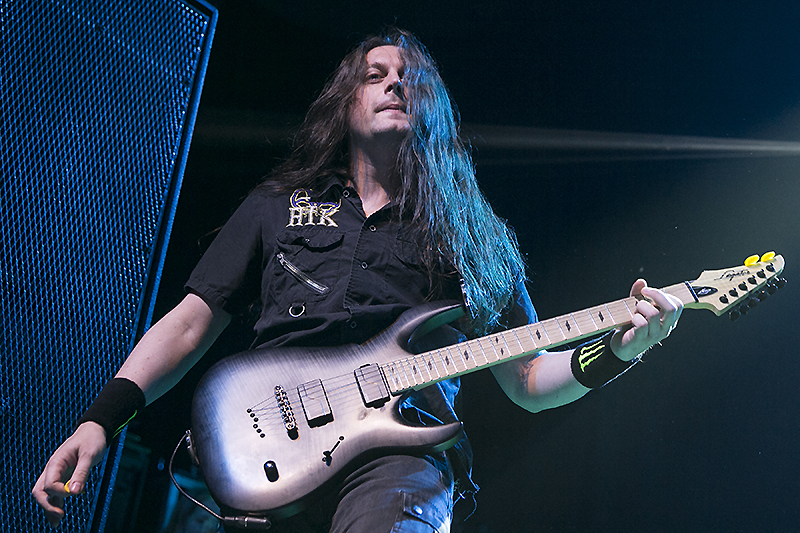 Just when you thought there was going to be a drop, Anthrax pulled out the biggest surprise of the night: a fun cover of the Stormtroopers of Death song, “March of the S.O.D” (a band that Ian and Benante were both founding members of). The pounding riffage and pummeling beat of the song was a perfect segue into the crushing “Blood Eagle Wings,” a newer track which featured some of Jon Donais’ best lead guitar work of the night. To close things out the band rolled out their legendary cover of Trust’s “Antisocial” and the thrash anthem “Indians.” 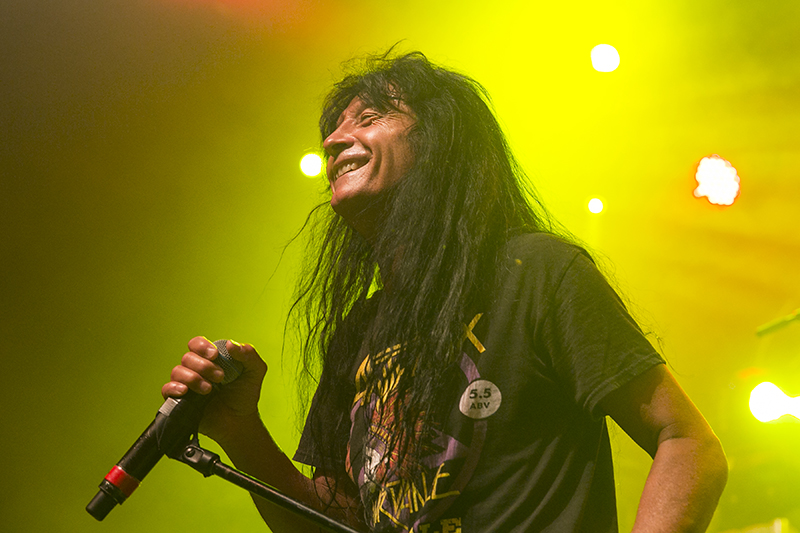 “Antisocial” mixed revved up metal with bubblegum pop melodies to get its point across, with Ian’s ferocious and percussive guitar playing leading the way. “Indians” ended the night in climactic fashion, as the song’s dense web of interlocking stop-start dynamics were something else to behold. Again, punctuated by a killer set of guitarwork, the song gradually ratcheted up the intensity before exploding upon Scott Ian’s classic battle cry of “war dance” before going into a stomping breakdown. It was a cathartic end to a spectacular night of metal. 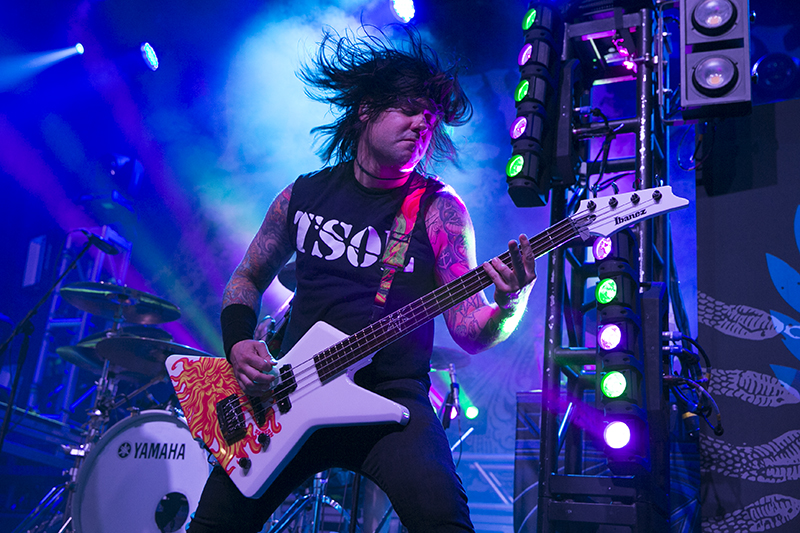 Killswitch Engage got the night started off right by powering through a seventeen-song set that spanned their entire career and included some seldom-played deep cuts that really blew fans away. Killswitch began with the scorching “Hate by Design,” one of the lead singles off their latest album, Incarnate. That was only a taste as to what was to come as immediately following the conclusion of that song, the band ripped into an early period classic, the crushing “Vide Infra.” Fueled by a combination of   Adam Dutkiewicz’s and Joel Stroetzel’s crushing guitar playing along with Jesse Leach’s caustic vocal delivery, the song was the first big highlight of the set, only to be topped immediately afterwards by the anthemic “My Last Serenade.” 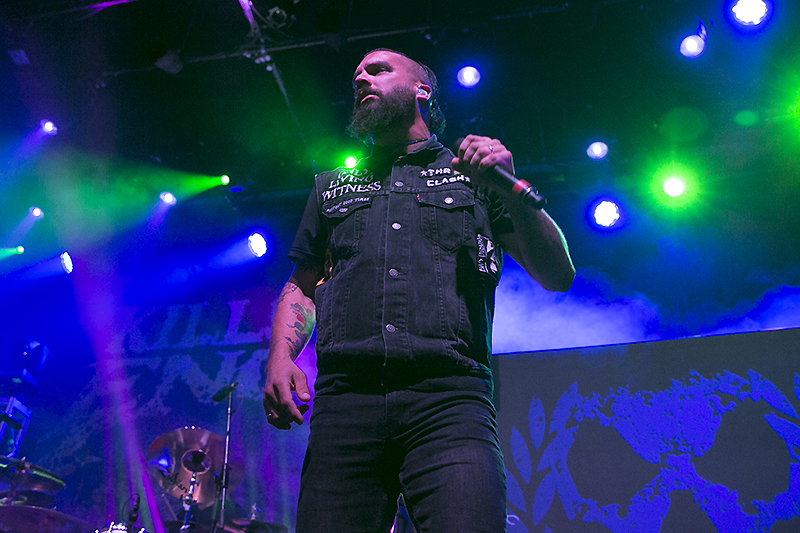 The song featured some of Leach’s most impassioned vocals of the night, blending harsh screams in the verses and tuneful melodic lines in the choruses. Dutkiewicz was all over the stage during this song, a recurring theme throughout the set, bashing out tight riffs and delicate lead guitar harmonies. Towards the end of the song, Leach stepped out into the audience to crowd surf whilst belting out the final chorus. It was a seemingly spontaneous and incredible way to end a song, as it caused the crowd to bristle with even more energy. Not missing a beat, Killswitch tore into the pummeling “A Bid Farwell.” Driven by a fierce drum/bass groove from Mike D’Antonio and Justin Foley, the song again deals in musical extremes, with ear splitting dissonance giving way to gorgeous harmonies. This was a trend that continued during the rest of their set, with the band alternating between well-known classics and newer material before unleashing a mind-boggling cover of the DIO standard “Holy Diver.” With Joey Belladonna guesting on lead vocals, the song rode an impressive series of high powered riffs as Dutkiewicz and Stroetzel traded off impressive guitar solos. 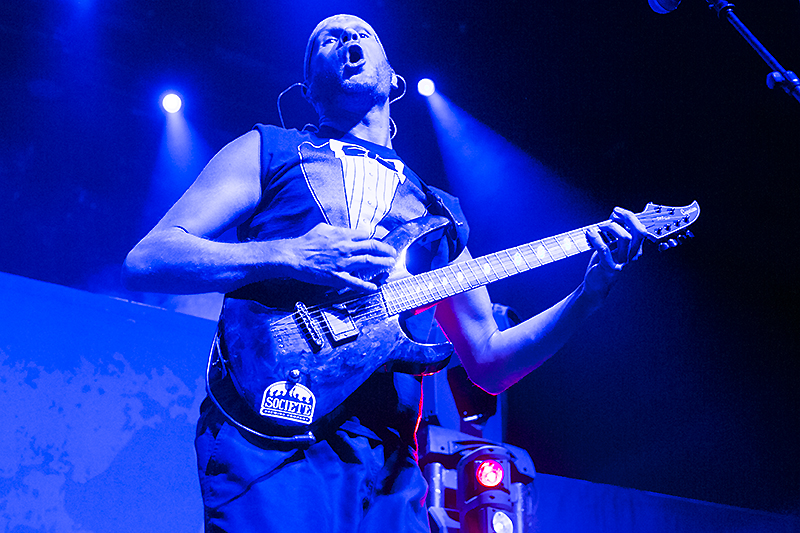 What really stood out from Killswitch Engage the whole evening (and crystalized on this track) was the positive attitude and energy that emanated from them and onto the audience. These guys simply love to play, and love to perform their music in front of an adoring crowd. With such a powerful live show, Killswitch Engage is still operating at an incredibly high level, even in their second decade of musical existence. 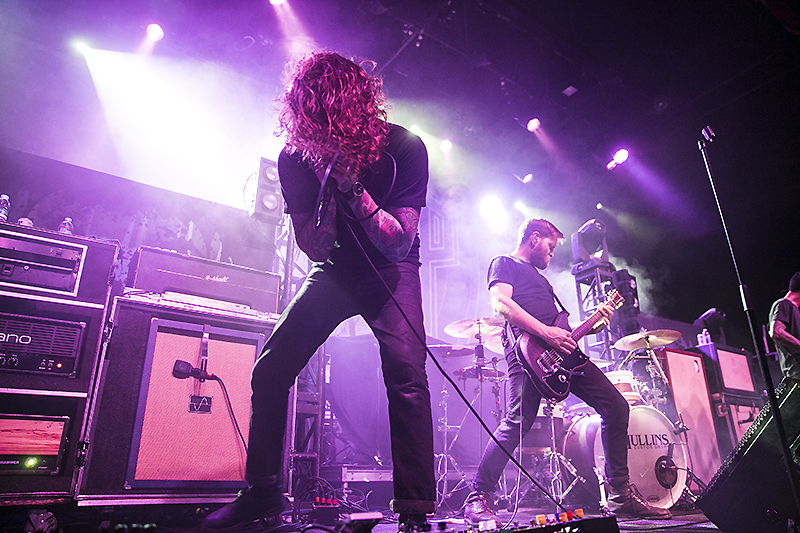 Metalcore band The Devil Wears Prada opened, giving a quick start to the energy level that was sustained all night. Vocalist Mike Hranica screamed through the set, aided by the less-screamy vocals of rhythm guitarist Jeremy DePoyster. As expected, in addition to Hranica’s intense vocals, TDWP delivered heavy beats and speed guitar riffs. Definitely music to mosh to.

Setlist: Among the Living | Caught in a Mosh | Madhouse | Fight ‘Em ‘Til You Can’t | I Am the Law | Breathing Lightning | Efilnikufesin (N.F.L.) | Evil Twin | March of the S.O.D. (Stormtroopers of Death cover) | Blood Eagle Wings | Antisocial (Trust cover) | Indians

Setlist: Hate by Design | Vide Infra | My Last Serenade | A Bid Farewell | The New Awakening | This Fire | Alone I Stand | The End of Heartache | Embrace the Journey…Upraised | Fixation on the Darkness | Rose of Sharyn | This Is Absolution | Beyond the Flames | Strength of the Mind | My Curse | In Due Time | Holy Diver (Dio cover)

Everything you want to know about Killswitch Engage can be found here.

Find out more about The Devil Wears Prada on their website.