The Darkness are proving to be a force to be reckoned with if their recent show at The Regency Ballroom in San Francisco is any indication. While many people are bemoaning the death of rock ‘n’ roll and the sea of current bands is filled with bland plaid shirt wearing Zeppelin sound-a-likes, The Darkness are creating their own unique brand of kick ass rock ‘n’ roll inspired by early Queen, Thin Lizzy, and AC/DC. 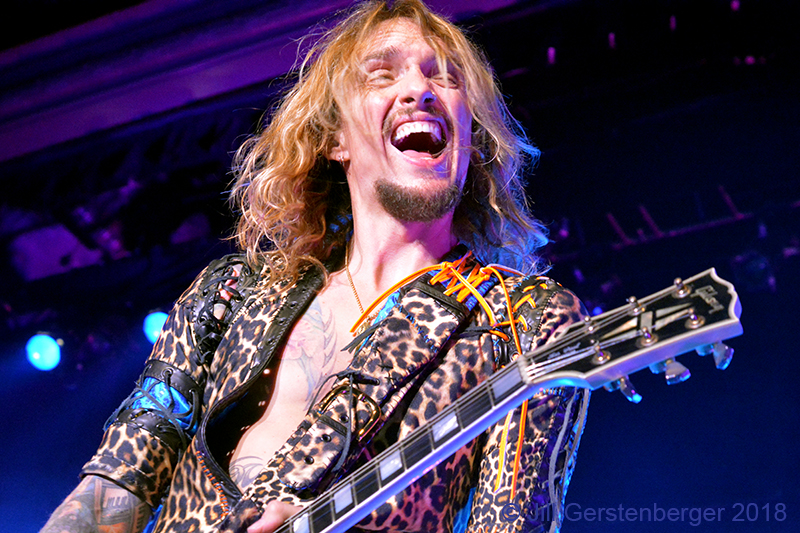 While their music is tight and filled with heavy guitar riffs and pounding drums, their stage show has become legendary from people in the know. Justin Hawkins is one of the most charismatic front men out there these days and he has the ability to pull off a spandex catsuit and cape like no other. It’s not uncommon to see him standing on his head clapping his feet in front of the drum riser, stage diving, or jumping off balconies in between playing some fierce guitar solos. His brother Dan is the driving rhythm force of the band and he’s usually on the left blasting his Marshalls to eleven while non-stop headbanging. Bass player Frankie Poullain is the stylish, dry-witted one who dresses better than all of us in his wide lapeled suits. 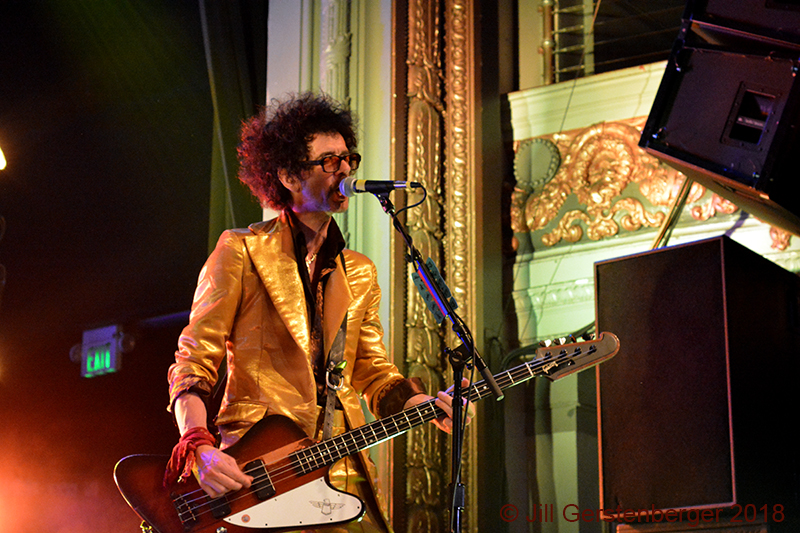 Formed in 2000 in Lowestoft, Suffolk, England, the band had some commercial success with their debut album, Permission to Land, in 2003, which included the hit “I Believe in a Thing Called Love” and also with the Christmas single “Christmas Time (Don’t Let the Bells End)” released the same year. The band released One Way Ticket to Hell…and Back in 2005 and broke-up later the next year over personal issues but reformed in 2011 and released Hot Cakes in 2012. Original drummer Ed Graham was replaced in 2014 by Emily Dolan Davies for the recording of Last of Our Kind, and in April 2015 the band announced that drummer Rufus Taylor, son of Queen drummer Roger Taylor, was joining the band. With the addition of Taylor, the band has had a renewed sense of energy as his powerful drumming takes the band to a whole new level that rocks even harder than before. 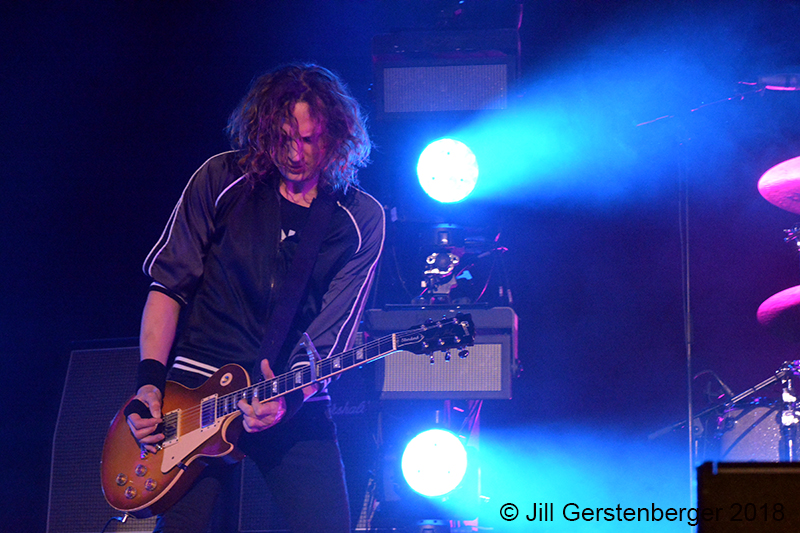 The show at The Regency was packed to capacity and filled with loyal followers of the band who had traveled far and wide to see the show. The band likes to open with the Abba tune “Arrival” and the energy in the air felt electric as soon as the lights went out. Singer Justin Hawkins was wearing a leopard print catsuit with full cape which he quickly threw off in place of his white Les Paul custom. The band went into a spirited version of “Open Fire” before going in to their classic, “Love is Only a Feeling,” which had the crowd singing along and raising their arms in the air. Their new album, Pinewood Smile is filled with some hard rocking, almost metal sounding, tunes, including “Southern Trains” which has the guys headbanging in unison while Taylor smashes the drums with flair. They then went on to a couple classic tunes, “Black Shuck” with a hilarious non-PC call and response with the crowd, and “One Way Ticket,” which had everyone hopping up and down in unison after Poullain enticed the crowd with his cowbell intro. The band has moved “Barbarian,” , with its howling chorus and driving beat, to the middle of the set and they played another one of their newer, faster tunes, “Buccaneers of Hispaniola,” which the crowd loved. During “Friday Night,” Justin corrected the crowd who was singing along that it was pronounced “Dahhn-cing” on a Friday Night, not “DANcing” making fun of our California accents. His banter between songs is always hilarious and witty. 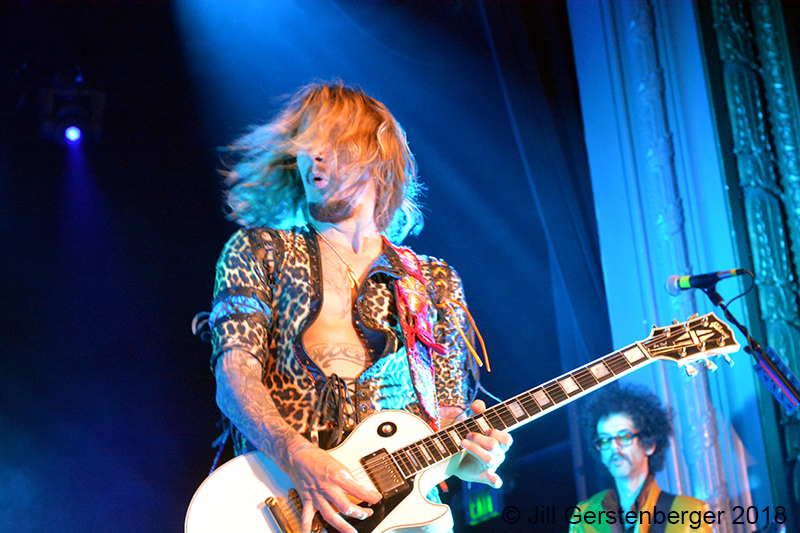 For the encore, the band played a driving version of “Japanese Prisoner of Love,” which is becoming a new fan favorite, before playing their hit, “I Believe In a Thing Called Love,” which had the crowd bouncing up and down again. They have their set dialed down to a tight hour and a half with the energy staying high the entire time. The crowd was having a blast and when the show ended they finished with the Bill Medley – Jennifer Warnes hit, “I’ve Had the Time of My Life,” which had the audience in smiles as they filed out of the building. We’re looking forward to seeing The Darkness again and hearing more new tunes along the lines of “Buccaneers of Hispaniola” and “Japanese Prisoner of Love,” which have an element of danger and risk that have been seriously lacking in rock ‘n’ roll these days. While most rock bands are playing it safe, The Darkness are creating the kind of music and performance that sets our soul on fire. 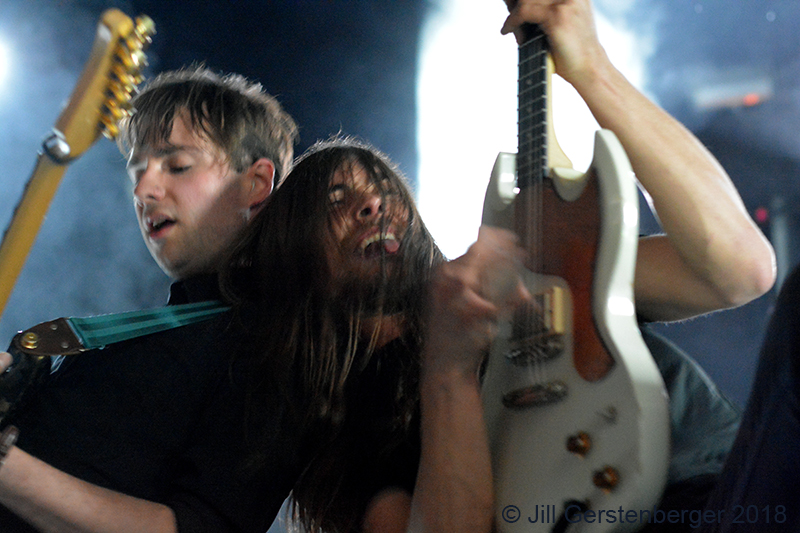 Opening for The Darkness was the Nashville band Diarrhea Planet, which was full of energy and filled with guitar players. They had four of them altogether; each looked like they could be in different band. It was pretty entertaining with the quick punk styled songs changing up before you could catch on to the chorus. Guitarist Jordan Smith would stage dive into the crowd with his guitar with no warning, causing mass confusion and chaos for the people in the front and the security. Their song, “Platinum Girls” was a crowd favorite and had a Ramones vibe. The song “Separations” was really catchy with a Wheezer feel. We liked their originality and carefree attitude. We need more of this in rock music today and we’re looking forward to seeing them again.

Here’s a slideshow with more photos of The Darkness by Jill Gerstenberger:

Find our more about The Darkness on their website.