On a Friday night, the Fillmore hosted sold out crowd to Austin TX’s Black Angels, impressive considering that both Sparks and Dinosaur Jr. were both playing that night in town. 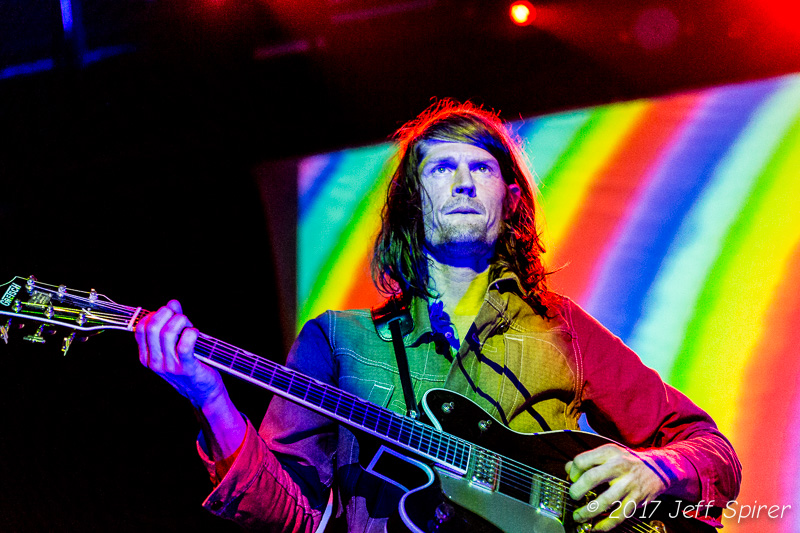 The band has been around since 2007 with 7 releases to date and has been Roky Erickson’s live backing band as well as getting their music onto various TV shows. The band’s 1½ hour set mostly emphasized songs from their latest LP Death Song with the rest of the set consisting of multiple songs from their debut Passover and one song each from their second and third albums. 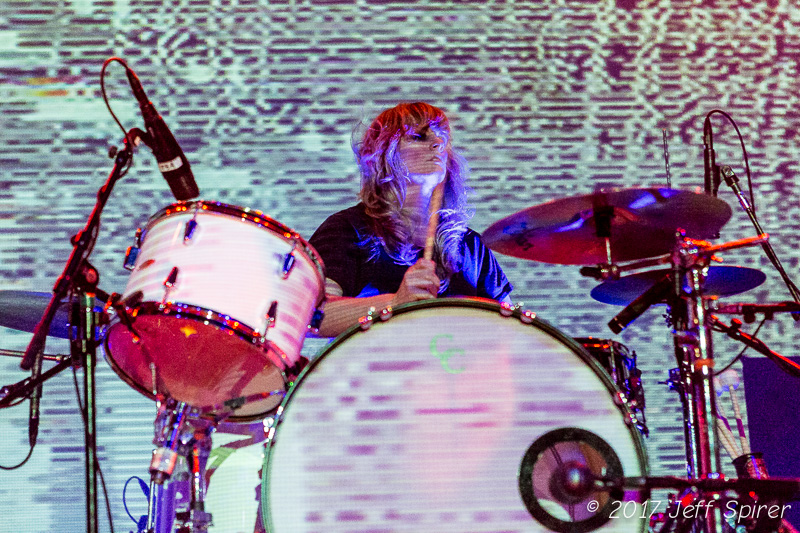 After revving up a very impressive projection and light show, a slowly throbbing projection of the band’s logo with the Velvet Undergrounds “Black Angel’s Death Song” over the PA, the band stepped onstage and launched into “Currency” from Death Song. With its twitchy Echo and the Bunnymen-esque vocals and massive guitar parts, mixed with over the top strobe lights, the rock show with all its associate pyrotechnics had begun. 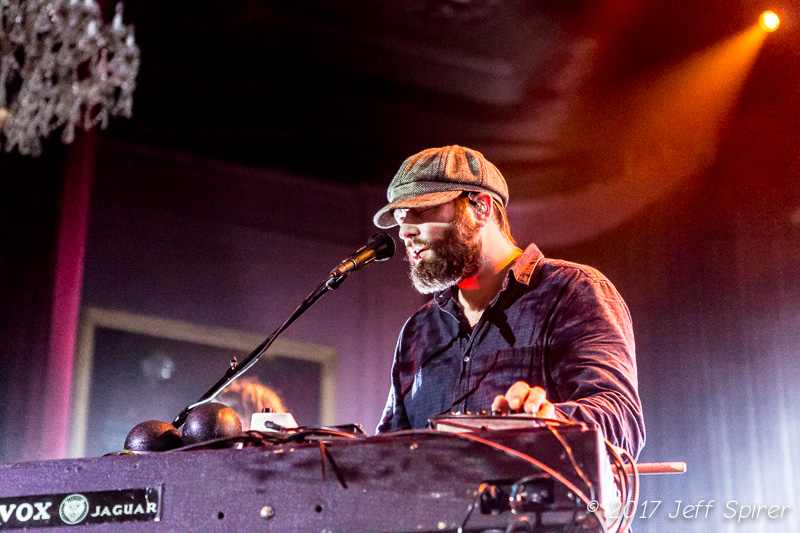 Despite that overt Velvets nod in the beginning, the Black Angels take a lot from bands influenced by the Velvets rather than a direct ape, at no time do they sound like the Feelies; think Spaceman 3, especially the “Sound of Confusion” LP and Suicide even bands like Loop: a mix of the Velvets sensibility with more outer space/psychedelic trappings assisted by modern technology. Unlike bands in a similar space like the Brian Jonestown Massacre or the Bay Area’s Asteroid # 4, the shoegaze, folk, or traditional song elements have been jettisoned so the song just rests on the sonic characteristics that they have crafted. 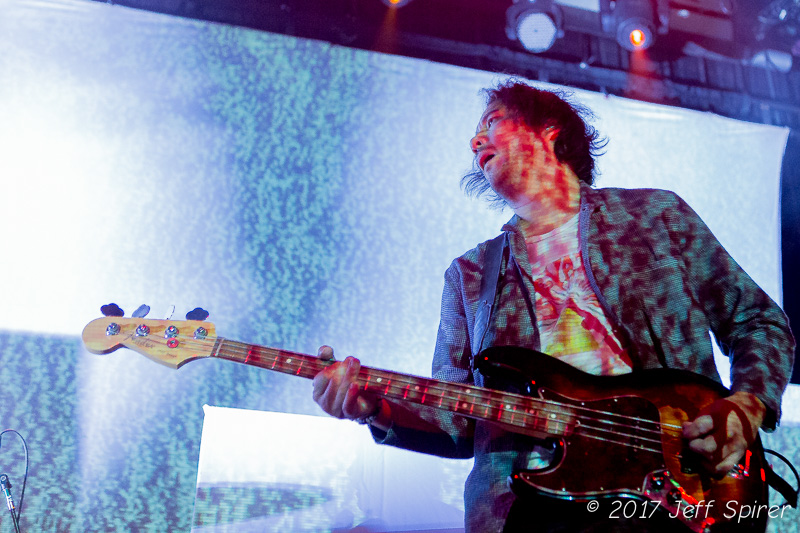 All their records are quite good and consistent with good production and detail; live, visuals and an overwhelming guitar presence appear to be their oeuvre. The second song “Bad Vibrations” (from Passover) was a textbook case of taking all the familiar elements and coming up with the goods. The use of Cramps-like guitar twang combined with white noise Suicide-like keyboard parts, plenty of guitar fuzz topped with a Jim Morrison-like vocal performance made for a pretty kick ass tune. 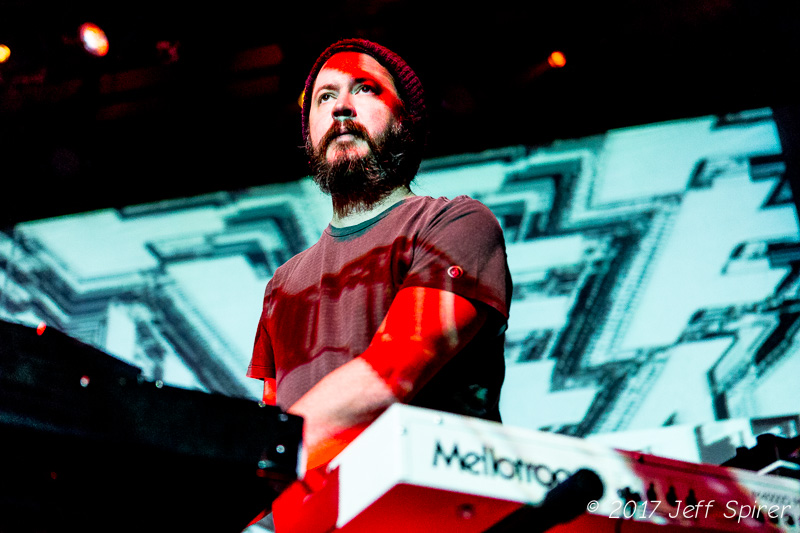 One downside of relying so much on a certain set of rock moves is that songs can all seem samey. There appears to be no peak or valley in the set. On record the vocals are well recorded, live the vocals are drenched in reverb even more so than the record and all lyrics are indecipherable. The band themselves contribute to this atmosphere in their somber workman like approach to their job. They stand still, mostly expressionless and move slowly to silently switch instruments every so often (there’s a fair amount of that). Of course lead singer Alex Maas is never without this trademark messenger cap and full growth of beard which he has always had in his 10 years of being in the band. He is also possibly the most unobtrusive lead singer in rock and roll, slinking around the stage we never see his eyes, just another element in the Black Angel’s sound. 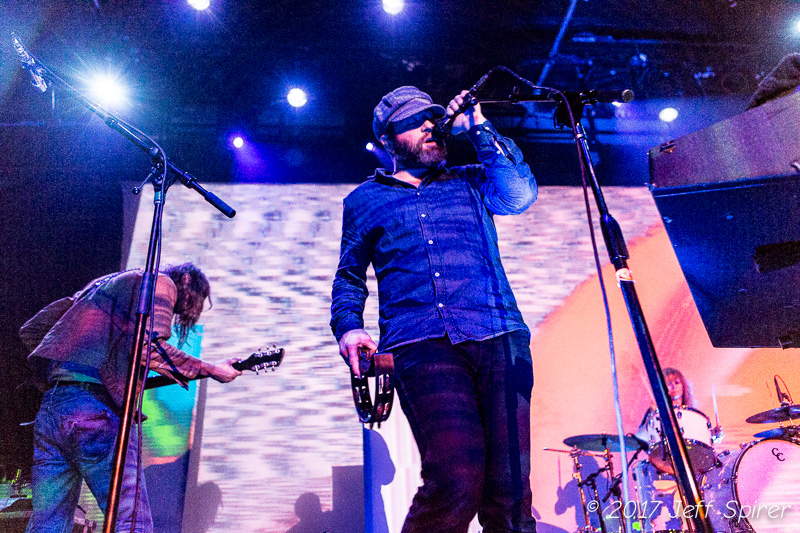 Once in a while the mood was slowed down and a certain space crept into some of the songs, especially on “Life Song” which has a certain “Space Oddity” going-on-a-journey motif, gorgeous church organ-like parts and slower, more drawn out and ultimately touching vocal performance from Mr. Maas. 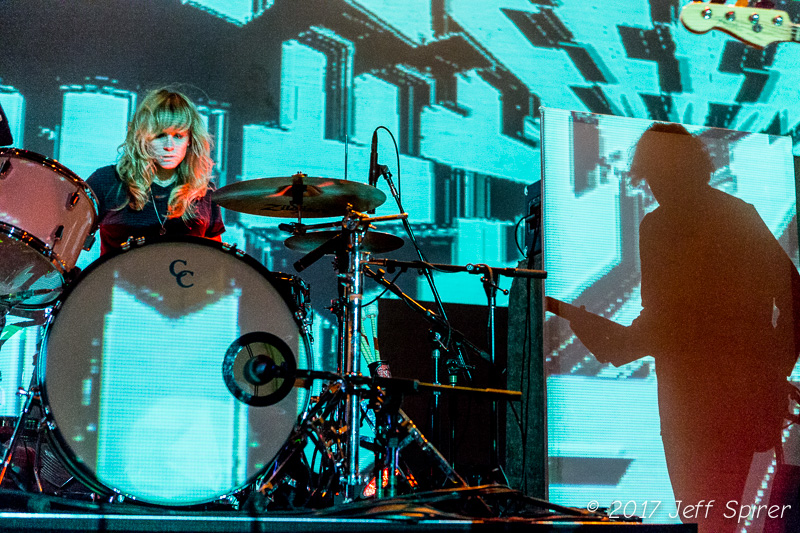 Needless to say, the band sounds great live and has strong material, one wonders what’s up their sleeve after seven records of this, but the audience appears happy with what they have. They have certainly staked their place in their genre. They came back for three encores for the audience. As enjoyable as it was, one also wonders what Sparks song were done across town.

The opener was The Ron Gallo 3, 3 young dudes with the lead singer sporting a white guy fro and imparting a big Napoleon Dynamite vibe to the proceedings, the drummer was a dead ringer for Keyso in That 70s Show, and the bass player constantly played that opening part from the Beastie Boys “Sabotage.” It was good geek-punk with the lads jumping around and with song titles like “All the Punks Are Domesticated” . This was a good counterpoint to the concentrated intensity of the headliner.

Setlist: Currency | Bad Vibrations | The Prodigal Sun | I Dreamt | Medicine | Hunt Me Down | Black Grease | Grab As Much (as you can) | Half Believing | The Sniper at the Gates of Heaven | I’d Kill for Her | You On the Run | Comanche Moon | Life Song || Death March | Bloodhounds on My Trail | Young Men Dead

For more information about The Black Angels, see their website.

Find out more about the Ron Gallo 3 here.