The Alarm brought the old school punk rock to The Chapel in San Francisco on a recent Friday night. Formed in Rhyl, North Wales in 1981, the band gained popularity in the 80s when they opened for U2 on their War tour in the US and released a hit single at the same time, “The Stand” on their EP The Alarm. They followed up in 1984 with their album Declaration that included the hits “Blaze of Glory” and “Sixty Eight Guns,” the latter being their highest charting single, getting all the way up to number seventeen on the charts. The band managed to stand out in the sea of 80’s alternative music with their unique look of dandelion hair, black pants with concho buckles, and military influenced jackets but also with their music which was not only heavily influenced by Welsh culture but had great songwriting as well.

The band released several more albums and had additional hits including “Rain in the Summertime” and “Rescue Me,” and in 1987 they played as the support on Bob Dylan’s tour. The band toured extensively for years; despite critical acclaim conflict arose in the band and in 1991 singer Mike Peters announced he was leaving the band while onstage at the Brixton Academy. The band’s members embarked on several solo projects, and in 2000 they released a complete collection of recorded material. Singer Peters assembled a backing band of different musicians to promote the collection under the band’s name. 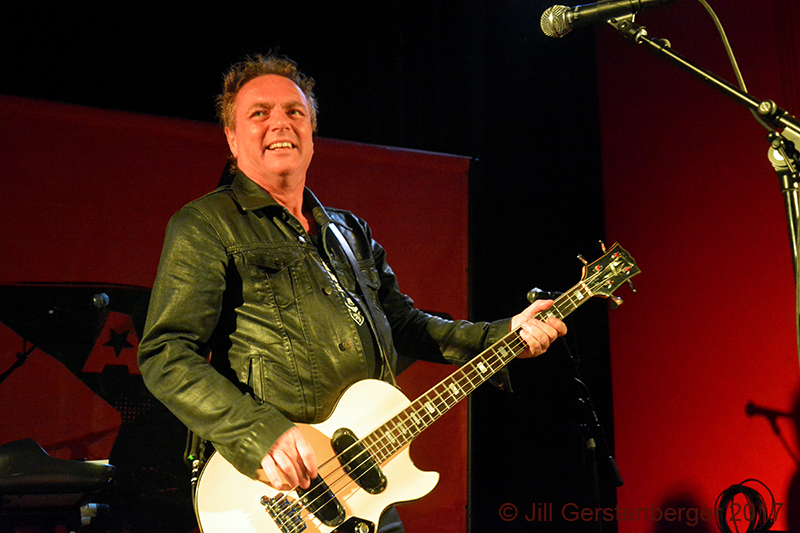 In 2004, Peters along with the new line-up of The Alarm pulled off a hoax on the British music industry when new material they recorded was getting little interest from industry insiders. They released the new material under the fictitious name “The Poppy Fields” and had a young band from Wales called The Wayriders lip-sync their song in a new video. The song, “45 RPM” became a hit and reached the UK’s top 30 before the hoax was revealed. The next year Peters discovered he had chronic lymphocytic leukemia and he started a foundation called Love Hope Strength to help with the fight against cancer. The foundation sponsors treks on which famous musicians climb the world’s highest mountains and perform concerts at the peaks. So far they have climbed Mt Everest, Machu Picchu, and Mount Kilimanjaro, and have had musicians such as Chuck Berry, Squeeze’s Glen Tilbrook, and members of The Cult, Stray Cats, The Beat, and more attend their events. They also set up tables at large concerts like Lollapalooza to sign up people for the bone marrow registry and organ donor registries. 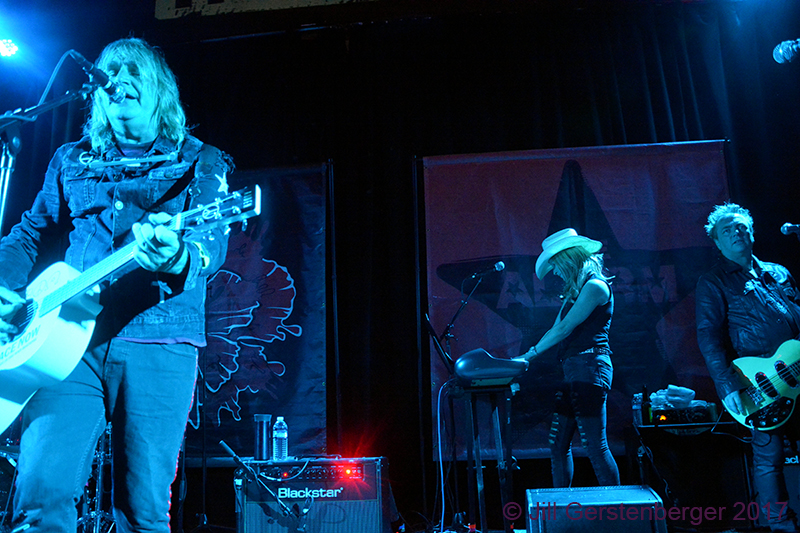 The show at The Chapel was attended by many of their loyal fans and the banter in the line outside made it clear that a lot of the people traveled far to see the band. In fact, the show sold out in the band’s presale before the tickets were even made available to the general public. For this show, the band included Mike Peters on vocals, guitar and harmonica along with some heavy hitters including James Stevenson (Gen X, Gene Loves Jezebel, and The Cult) on guitar and bass, Jules Peters, who is Mike’s wife on keyboards, and Steve “Smiley” Barnard (Robbie Williams, Joe Strummer and the Mescaleros, and The Jam) on drums. 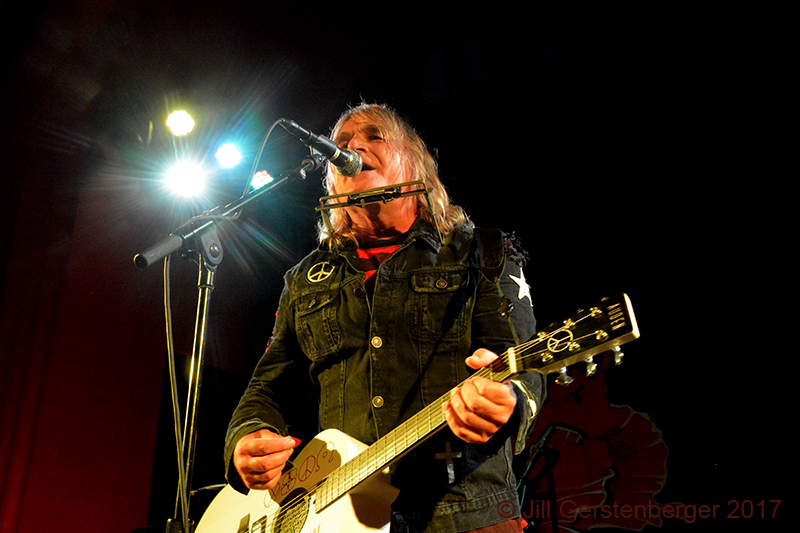 The band hit the ground running from the moment they went on stage and the energy level stayed high throughout the entire show. They were three live microphones up front and Peters ran back and forth singing in all of them during the first few songs. His voice sounded great, leading to some of the best moments of the evening when he was playing acoustic by himself with just his guitar, harmonica, and a single bass drum at his feet that he pounded during highlights of the song, all the while sweating and semi-screaming the lyrics as the crowd went wild. Peters seemed to be loving every single moment he was onstage as if it could be his last. It was inspiring and something you don’t see that often in today’s younger musicians. 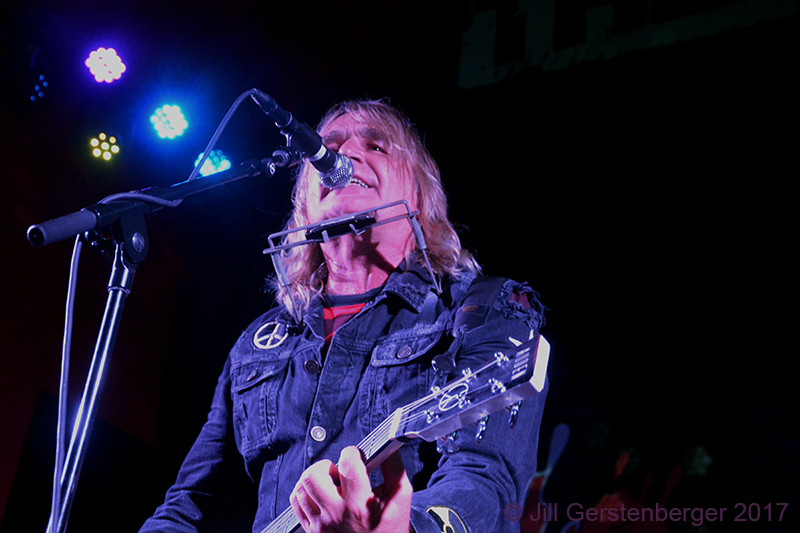 Fans at the front of the stage became part of the performance when he went from telling stories to splaying decks of playing cards all over them; during the performance of “Rain in the Summertime” he sprayed a half a bottle of water on to them from his mouth. There was never a dull moment. The band went into spirited versions of “68 Guns” and “The Stand,” and the crowd, which had its arms in the air most of the time, sang along loudly to all the words. In an intro to a cover of “Anarchy in the UK” Peters told the story of how he met Johnny Rotten in a club and when he went to talk with him Rotten told him to fuck off, which inspired him to start his own band. The clever tale was accompanied by swearing and spitting and one person in the crowd decided to throw a bottle on stage that flew past this reviewer’s head but didn’t land anywhere near the band. The band did a great version of “Rescue Me” and “45 RPM” before doing and extended version of “Blaze of Glory” that had the audience singing, “Going out in a blaze of glory….” over and over for a few minutes when the band left the stage. They returned for the first of two encores, playing “Strength” and “Two Rivers” and then returned to the stage for a second encore, introducing The Alarm’s original drummer Nigel Twist, who played on the last two songs with the band. This got the band’s loyal followers totally excited as it’s always great to see the people who made the original magic happen on stage together again. Peters announced at the end of the show that they were working on a new album and were planning on returning to the Bay Area again next year. We’ll be sure to follow the band on their website so that we can get in on those presale tickets before they’re gone this next time around. We sure wouldn’t want to miss it. 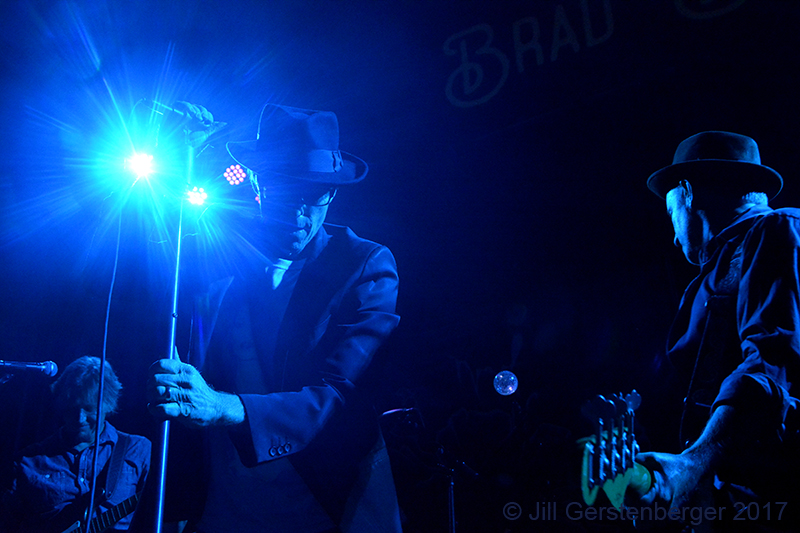 Opening for The Alarm was Oakland’s own Brad Brooks, who played an enjoyable set. Brooks is an interesting combination of Chris Robinson, Tom Waits, and Elwood Blues of The Blues Brothers. He has a soulful voice and dances around frenetically while his talented band played a mixture of soul, southern rock, blues and experimental rock. Bay Area music folks will recognize Joey DiBono on bass who used to play in Liquid Sky back in the day. He adds a groovy beat to this talented group. We’re definitely looking forward to seeing these guys again playing around the local scene and we’ll be keeping our eye out for upcoming shows.

Setlist: Declaration | Marching On | Where Were You Hiding When the Storm Broke | Coming Backwards | Absolute Reality | Breathe | (Mike Peters song) | The Drunk and the Disorderly | Walk Forever by My Side | Rain in the Summertime | 68 Guns | The Stand | Anarchy in the U.K. (Sex Pistols cover) | Spirit of ’76 | Love and Understanding | Rescue Me | One Step Closer to Home | 45 R.P.M. | Blaze of Glory || Strength | Two Rivers | Encore 2: | Sold Me Down the River | Rockin’ in the Free World (Neil Young cover) | |

Find out more about The Alarm here.

Check out the Mike Peters Love Hope Strength Foundation on this website.

Everything you ever wanted to know about Brad Brooks can be found here.