The 1975 brought the Bill Graham Civic Auditorium back to ’80s England recently. A group that can be considered ‘aesthetic incarnate,’ they inspired a boy-band level of fanaticism in the crowd of flower toting girls and reluctant boyfriends. Consisting of Matty Healy on lead vocals and rhythm guitar, Adam Hann on lead guitar, Ross Macdonald on bass, and George Daniel on drums; The 1975 are a band that is hard to define. They are polarizing; with juxtaposition a foundation of their image and their music. In essence; a band you hate, or a band you worship. 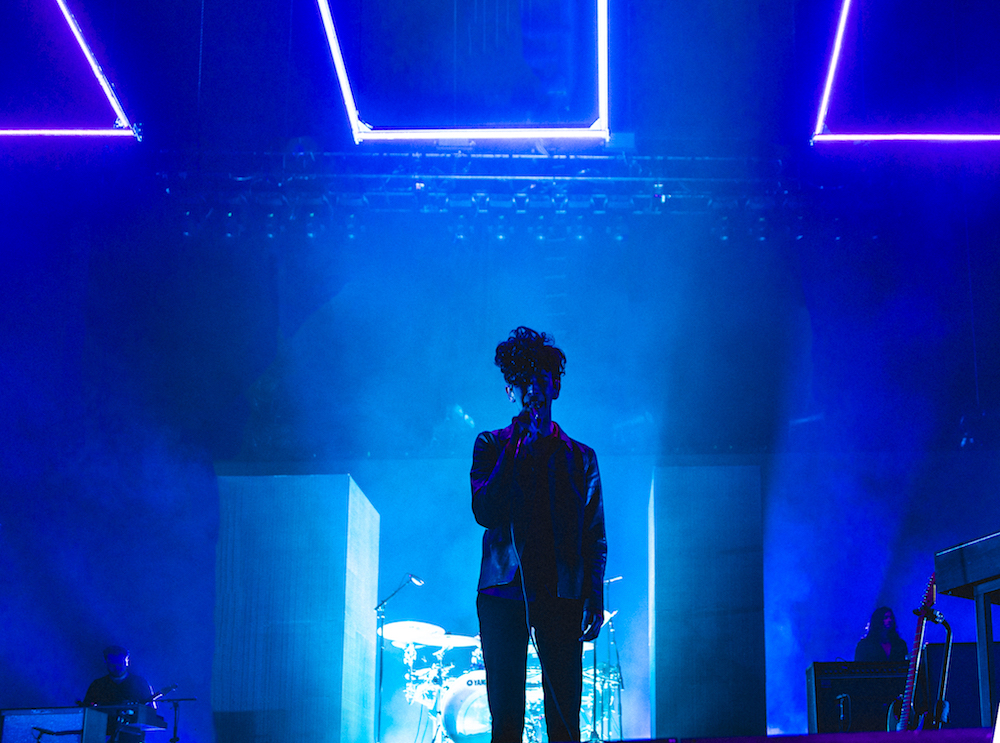 It’s easy to see why their main demographic, teenage girls; are drawn to them. Front man Healy is a complex character with a mop of messed curls, garish tattoos, leather jackets, and a fondness for cigarettes; he’s the walking embodiment of the bad boy that your mother warned you about. He’s the one that the fans are there for; and whether his demeanor is found to be enrapturing or irritating it’s incredible to watch how well he can play a room. 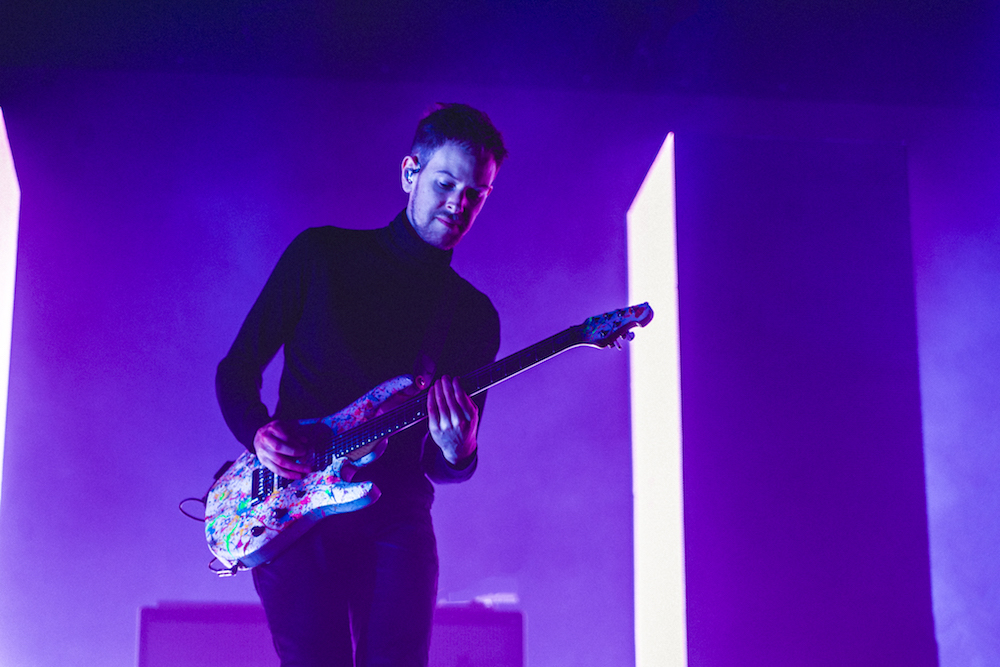 The uncanny ability of Healy to time a wave and a smile, to fall to his knees during a taxing vocal riff, to dance about in jarring, awkward and surprisingly suave motions, it’s all the essence of what this band is. A contradiction of an 80s pop sound with a black leather jacket, of a pungent cigarette smoked onstage and Healy happily catching a bouquet of roses from a crying girl at the barrier; it all leads one to either be completely captivated by the men lounging across the stage, or to question the truthfulness of the band. 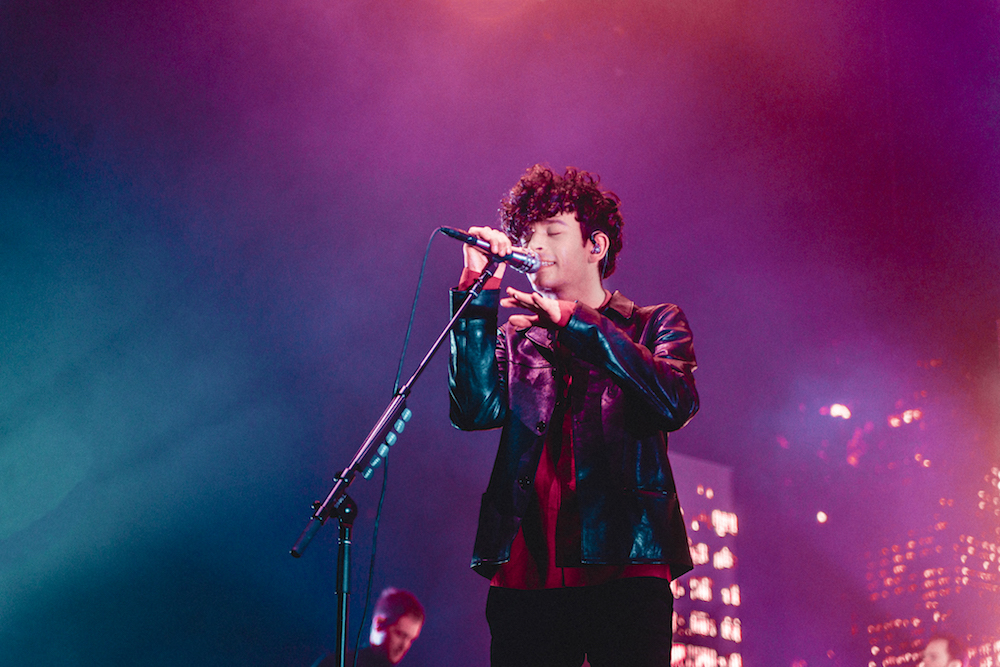 Is this group, and really is Healy, the sensitive lad hidden beneath skinny jeans and songs about sex and drugs, or is he a master at controlling and holding a room, at knowing what the crowd wants to see? Both are impressive; the first because in the day and age of perfect performers that are seen on social media a genuine face is a welcome sight, and the second because the uncanny ability of this band to craft their image so carefully and so thoroughly is admirable to anyone familiar with the art of performance and the taxing nature of the music industry. 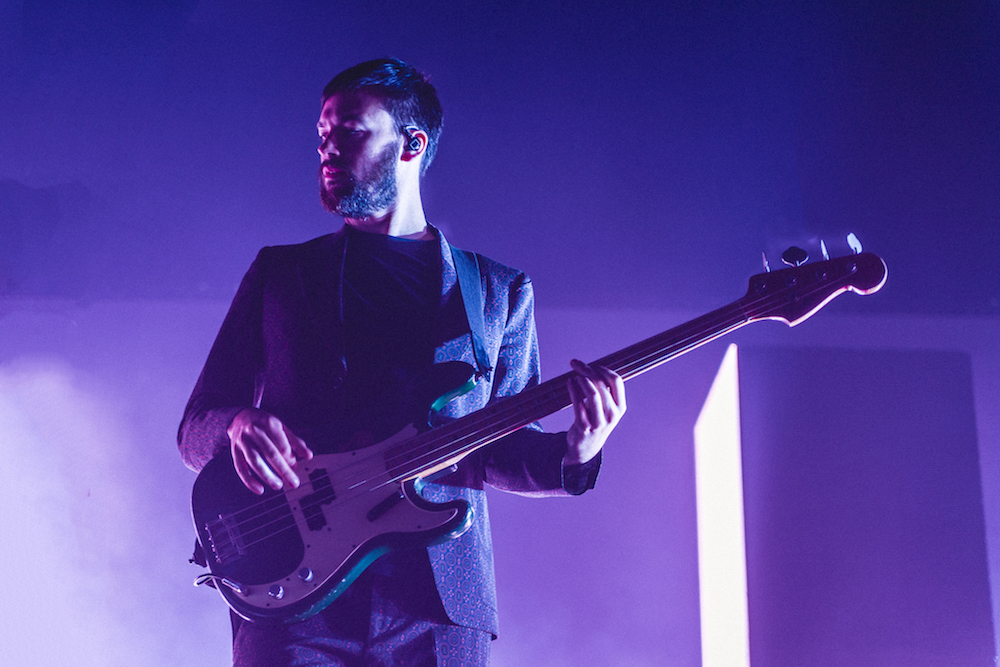 Despite what opinions some individuals have about The 1975, seeing them live is truly the best way to understand why, precisely, a small alt-rock band with some 80s-esque electro pop tossed in, is inspiring girls to skip school and sleep in front of venues for just a chance at being at barrier and closer to the performers. A self-described ‘post modern pop band,’ their music has influences from all over the entertainment industry that are clearly apparently in their lyrics, musical qualities, and themes. The musical tendencies of their albums are obvious in relation to their creative inspirations; Talking Heads, My Bloody Valentine, Sigur Ros, with the greatest influence coming from John Hughes (Sixteen Candles, The Breakfast Club, Pretty in Pink, Home Alone), one of the most successful directors of the ’80s. 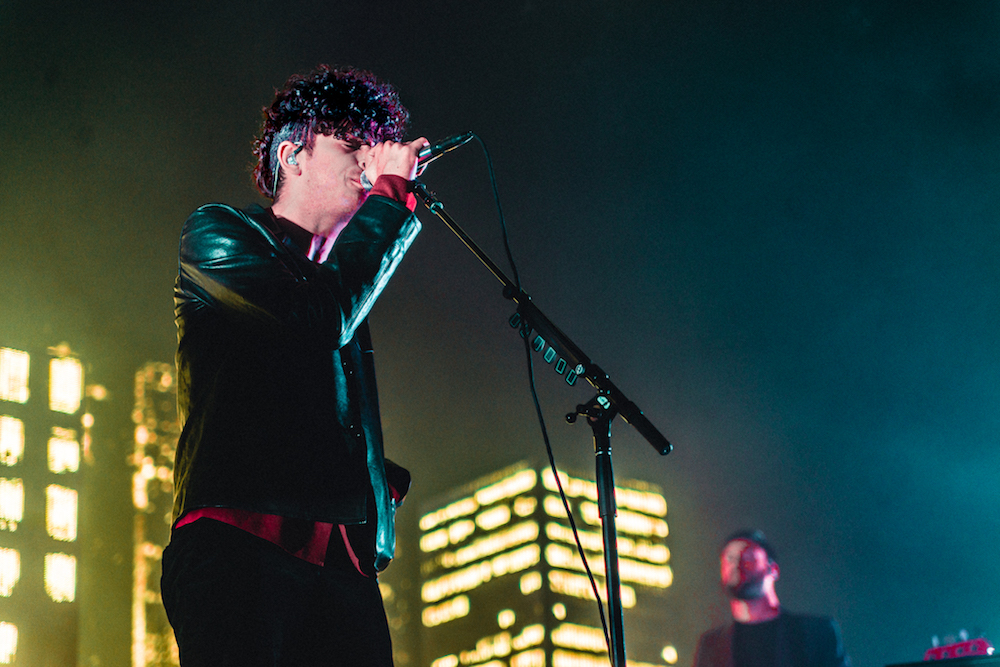 With guitar hooks that are insistently catchy and lyrics calling back to a decade known for drugs, sex, and teenage rebelliousness, it’s not difficult to ponder at why they draw the demographic they do. The glamorized ideals of freedom through rebellion (as in their song ‘Robbers’), teenage love stories (‘fallforyou’), and sensitive boys (‘A Change of Heart’) all appeal to a generation that tends to feel the hammer of reality all too often and too hard. Rose-colored daydreams accompanied by a bit of funky bass is what had the entire auditorium shrieking the moment that the lights went down in the crowded space. 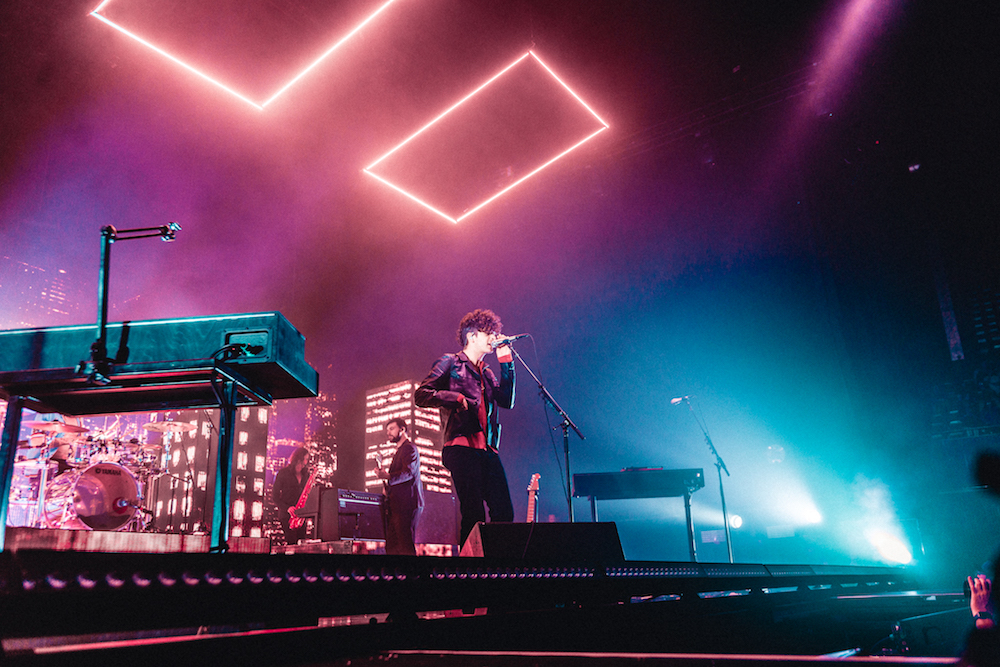 The band came on to their titular song ‘The 1975,’ cloaked in fog and eerie darkness, but the moment that the first guitar note came shredding from the speakers and the first word left Healy’s mouth the stage lit up a brilliant, signature pink. The enthusiasm from the crowd was infectious when paired with the sporadic dancing of Healy onstage and by the end of the second song (‘UGH!’) the audience was thoroughly engaged, with many of the people at barrier holding roses aloft as an offering for the man on stage. 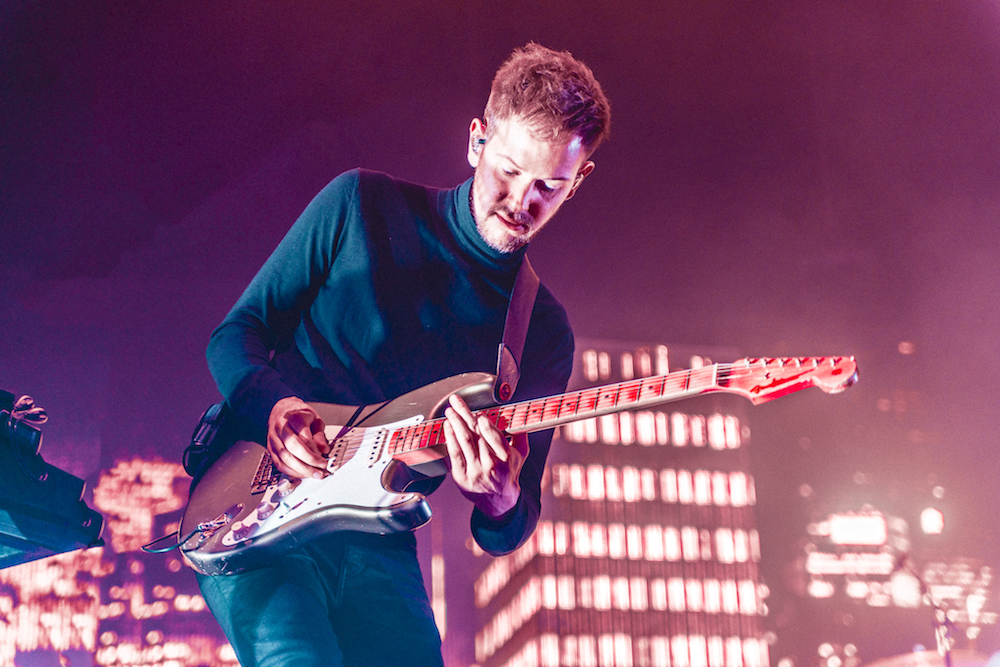 The set continued on, more flowers appeared on stage in piles throughout ‘A Change of Heart,’ with cathartic tears spreading throughout the pit as the group played through fan favorite ‘Robbers’ and title song ‘I Like it When You Sleep, for You Are So Beautiful Yet So Unaware of It,’ before an amazingly quiet performance of ‘Please Be Naked,’ a primarily instrumental piece. It was the most tentative moment of the night, with the screams of ‘I love you, Matty!’ disappearing and being replaced by a gentle sway, with uplifted hands opened towards the men on stage, as if trying to capture that exact moment and hold it. 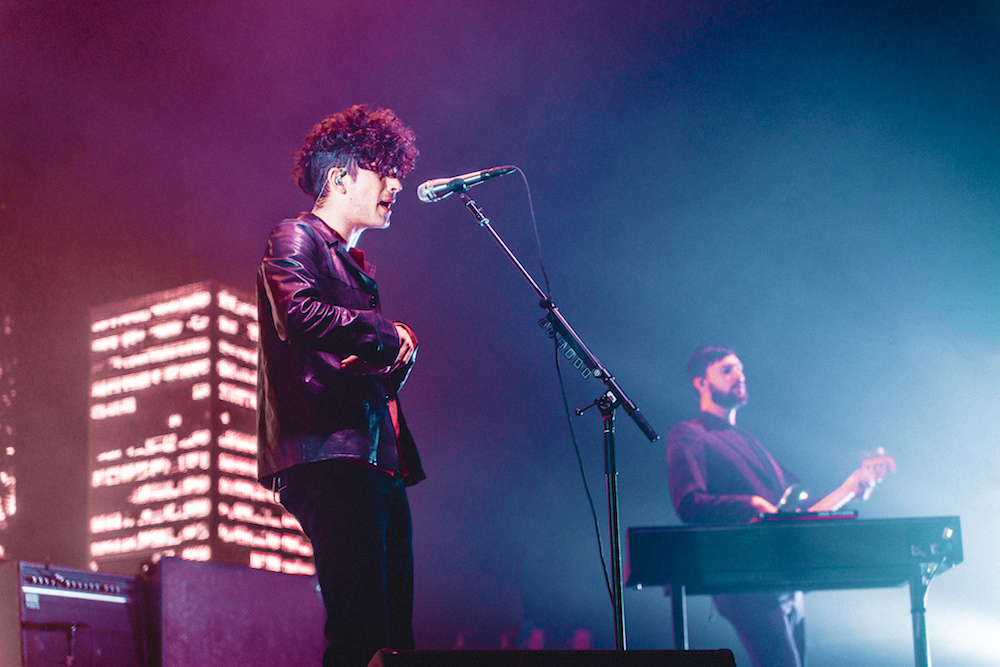 The ebb and flow continued through the night, with attendees shifting between singing at the top of their lungs and dancing with everything they could muster, and stilling for more tender, personal moments that was experienced as much with the band and the music as it was with the members of the crowd. The ability of Healy and bandmates to control the room in such a way, to command attention when necessary and to let the crowd slip into something more introspective, it shows that no matter what opinion one holds on the band and their image, they know how to captivate, and how to put on a damn good show.