One could assign any number of adjectives to describe the hordes of metal fans who are fortunate enough to reside in the Bay Area. Lucky, elitist, envied, spoiled, I’m sure there have been plenty of other colorful words used. But one thing is for certain, there is a special kinship that has existed since the very beginning, when bands like Metallica, Exodus, Death Angel, Legacy and the spawned Testament were laying the foundation for the empire of thrash metal. It started here, period. There has always existed a sense of birthright that has accompanied those that helped perfect the circle pit and stage diving. Need a refresher course or perhaps the decades of banging your head against the stage have left the memory a bit hazy? Just take a dive into the masterpiece book Murder in the Front Row by Bay Area metal icons Brian Lew and Harald Oimoen for a thorough pictorial history lesson. It’s analogous to a ride in Doc’s time machine capturing the genuine moments with cameras in hand every step of the way like a peruse through the family photo album.

The San Francisco stop on Testament’s “Brotherhood of the Snake” tour also featuring veterans Sepultura and Prong would serve as another family reunion-like atmosphere at the Regency. And as expected, it was the trash version of a Hollywood Oscars party. Members past and present of Exodus, Machine Head, Death Angel, Forbidden, all present and mingling per the norm. 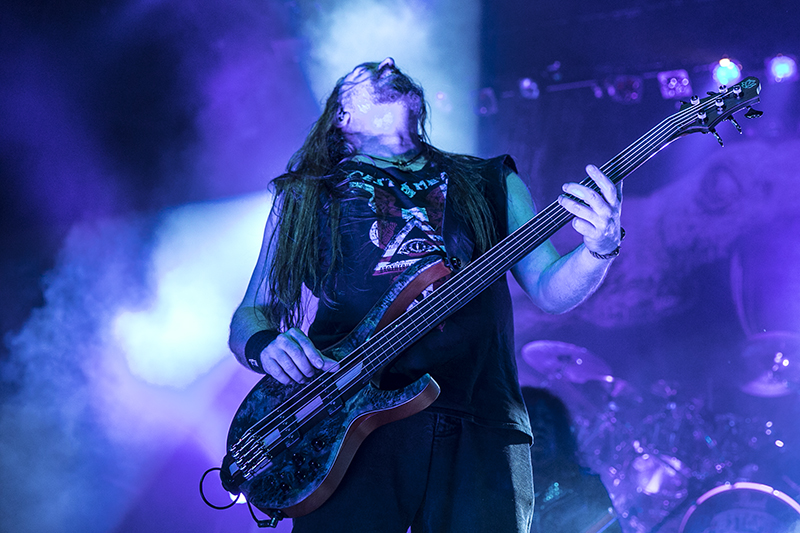 Although claiming Oakland as the band’s hometown, Testament was very much in their own backyard in San Francisco. With the lights chaotically showering the stage in a flurry of red with intro blaring, the anticipation reached its peak when guitarist Alex Skolnik took the stage with guitar raised to the sky and the crowd erupted with a metal battle cry. Eric Peterson, Steve diGiorgio, and Chuck Billy followed in his steps as Gene Hoglan took to his throne on the massive drum riser and it was ‘go time’! They unabashedly launched into the title track from their most recent release “Brotherhood of the Snake.” 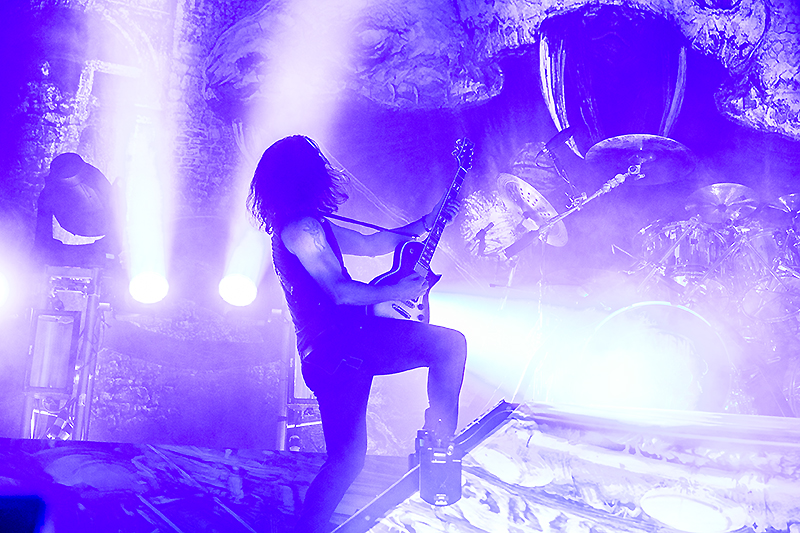 Never short on presence, ‘The Chief’ (Billy) was in typical commanding form. His intimidating stature and booming voice to accompany it draws the fans in to headbanging on command and match the band’s energy with 100% equal exchange. Perhaps headlining a successful major tour in one’s own backyard provides a few extra degrees of fortitude in one’s confidence. That certainly appeared to be the case for the entire band. 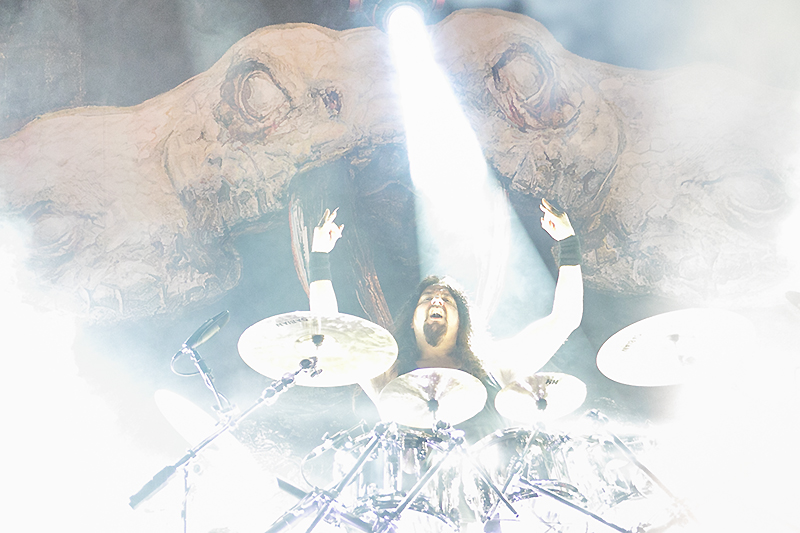 In an age where backing tracks and super polished mixes run rampant and water-down live performances, such was not the case this night at The Regency. Testament was delivering a seminar in thrash metal. Pure, 100% organic all killer no filler full of carbs, gluten, and calories. While the mix could have stood a bit more volume it was airtight. 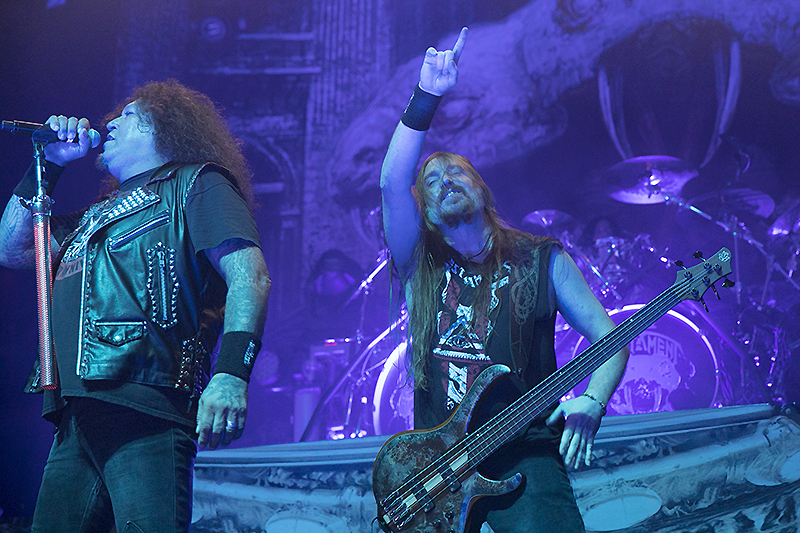 Billy offered a perfect homage to one of the Bay Area’s most infamous metalheads, the fallen Toby Rage. Billy reminisced about the early days back at Ruthie’s Inn and The Stone where you could always find Rage crowd-walking and topping things off with the most epic of stage dives ever witnessed. The walk down memory lane was the ideal segue way as Billy tasked the crowd “Show me Bay Area, you’re supposed to me some crazy motherfuckers!” and the band launched into “Into the Pit.” 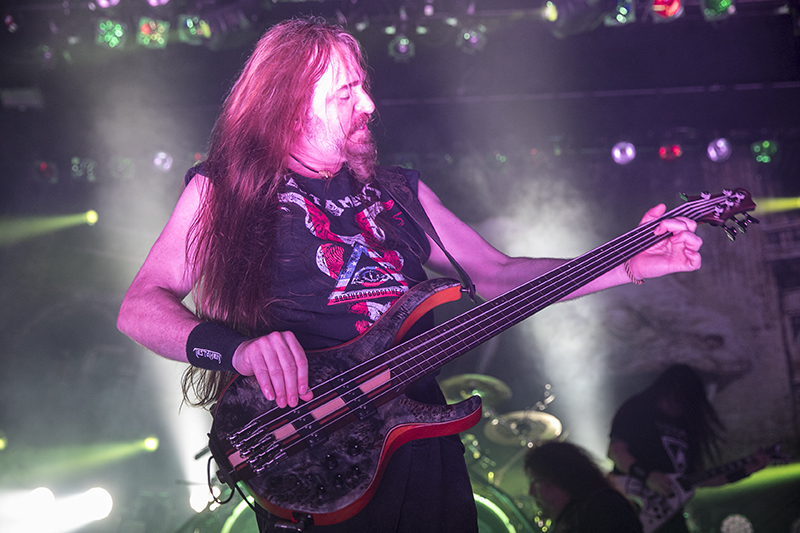 The Oakland quintet mixed it up well through the night playing cuts from nearly their entire catalogue. The set included five tunes total from the latest record “Brotherhood of the Snake” as well as classics from “The Gathering”, “The Legacy”, “The Ritual”, and, of course, “Practice What You Preach”. With each member hovering just above or below the half-century mark, they show zero signs of slowing down and are certainly in prime form to run circles around the younger heshers.

With the crowd reaching capacity, Brazilian legends Sepultura hit the stage with the dial turned to 11 peeling off two new face melting tunes, “I Am the Enemy” and “Phantom Self.” Founding member and guitarist Andreas Kisser displayed blazing chops out of the gate and an exuberance that rivals musicians half his senior. There was an energy that was nearly tangible from their performance. While uncertain as to when they hit their stride on this tour, this second-to-last date on the tour found Sepultura above and beyond their peak. They were simply on fire.

Frontman Derrick Green was just as commanding with his presence as he was with his ferocious vocal delivery. Three of the first songs were from Machine Messiah released in January of this year. Regardless of how enthralling Kisser and Green were that evening, it would be hard not to argue that drummer Eloy Casagrande stole the show from his mates. The twenty-six-year-old Brazilian native was an amalgamation of his predecessor Igor Cavalera, Keith Moon, and everyone’s favorite Muppet, Animal. He put on a clinic that could appropriately be titled “Anger, What Anger?” or “THIS… Is How You Hit Your Drums!”

In a chat with Green earlier in the afternoon he conveyed a perfect balance of humble pride as well as excitement for their latest release on Nuclear Blast Records. However responsive the crowd was to every song the band delivered, the classics are what many of the Bay Area die-hard Sepultura fans were waiting to hear. And sure enough, they came like a cannon blast. A trifecta including “Refuse/Resist,” “Ratamahatta,” and “Roots Bloody Roots” was a perfect we give/you give conclusion of their audio assault.

During last summer’s breeze through the Bay Area, Prong was playing smaller venues packing them in wrecking necks of the intimate, raucous crowds. Spring forward almost a year later and a venue that serves over 1,400 fans, Tommy Victor and company looked just as comfortable and had just as much synergy of the intimate shows. They came out swinging from the first tune “Ultimate Authority” off 2016’s “X-No Absolutes” release and the crowd was on board from the first chorus.

Prong has always featured solid players behind Victor, and the current lineup of drummer Art Cruz (who splits time also with Winds of Plague) and bassist Mike Longworth (ex-Mest) provide a freight train rhythm section. Despite his friendly demeanor, Victor is New York to the core. That gruff, unrepentant sound that Prong has developed carries the roots from the East Village.

Doling out a clever mix of old and new material, the band rolled on with four tunes from their biggest commercially successful album Cleaning including fan favorites “Who’s Fist Is This Anyway?” and “Snap Your Fingers, Snap Your Neck.” At the half-century mark in life, Tommy Victor can run circles around most of these youngsters on the Vans Warped Tour. He was full of vigor, metal, and up to his usual gravity-defying leaps while ringing out chunky riffs mid-air.

Here’s a slideshow with more photos of Testament by Raymond Ahner:

Setlist: Brotherhood of the Snake | Rise Up | The Pale King | Centuries of Suffering | Electric Crown | Into the Pit | Low | Throne of Thorns | Stronghold | Eyes of Wrath | First Strike is Deadly | Urotsukidôji | Souls of the Black | Seven Seals | The New Order | Practice What You Preach

For more information about Testament, check out their website.

Find out more about Sepultura here.

Setlist: Ultimate Authority | Beg to Differ | Unconditional | Cut-Rate | Cut and Dry | Another Worldly Device | Whose Fist Is This Anyway | Snap Your Fingers, Snap Your Neck | Sense of Ease /