Taylor Swift allowed some 100,000+ fans into her Reputation tour universe as she headlined a sold-out weekend at Levi’s Stadium. This came to the delight of throngs of her fans clamoring to see her, and to the scorn of those frozen in the gridlocked south bay rush hour commute. 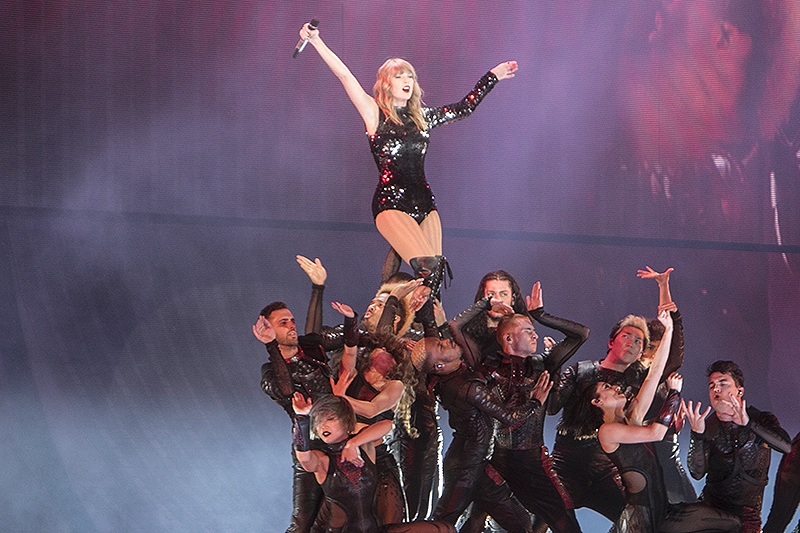 No matter what one might think of Taylor Swift (or Tay-Tay as some fans call her) it is undeniable that she is one of the most successful and polarizing characters in popular music. To many she epitomizes what is wrong with music and in a way society today. Trite, egotistical, lowest common denominator…. these are some of the ways she and her music have been portrayed in the media, and very strong arguments can be made for these contentions. 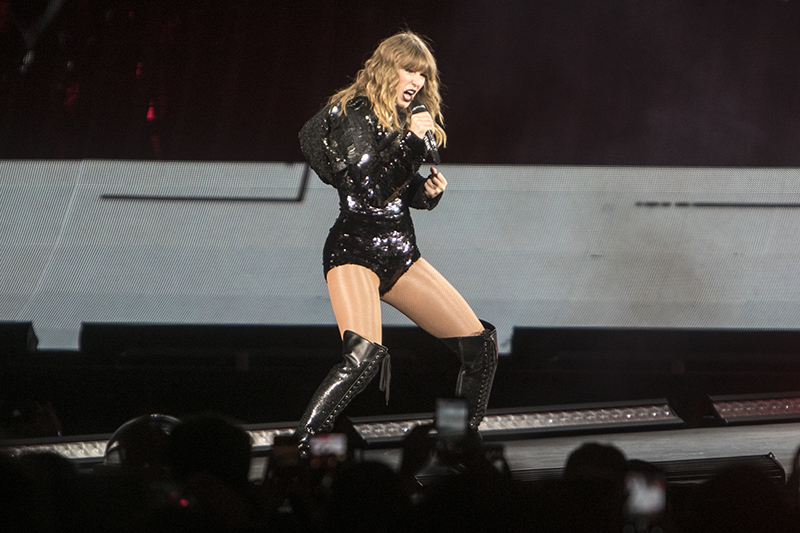 Despite this, she is also very talented (taking turns on guitar and piano at different points in the set) and her matter of fact manner of dealing with the trappings of her success is what helps her to resonate with females of all ages who somehow relate to her. 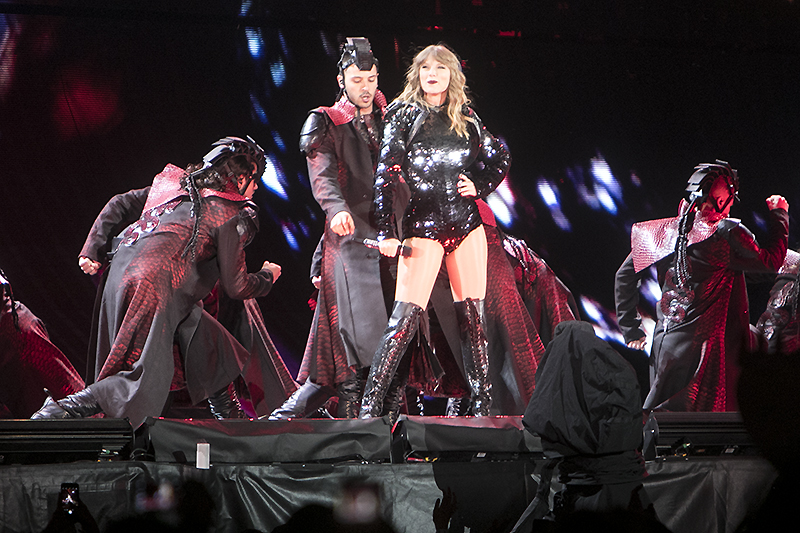 From 5 to 70 (yeah you read that right), Taylor Swift’s female fan base made up a strong 80% of the audience (of course very much skewed in the 15-30 range). The rest of the crowd were males who mainly fell in one of 3 buckets…whipped boyfriends, dads attending with their daughters, and a small sprinkling of pervy Weinstein look-a-likes. 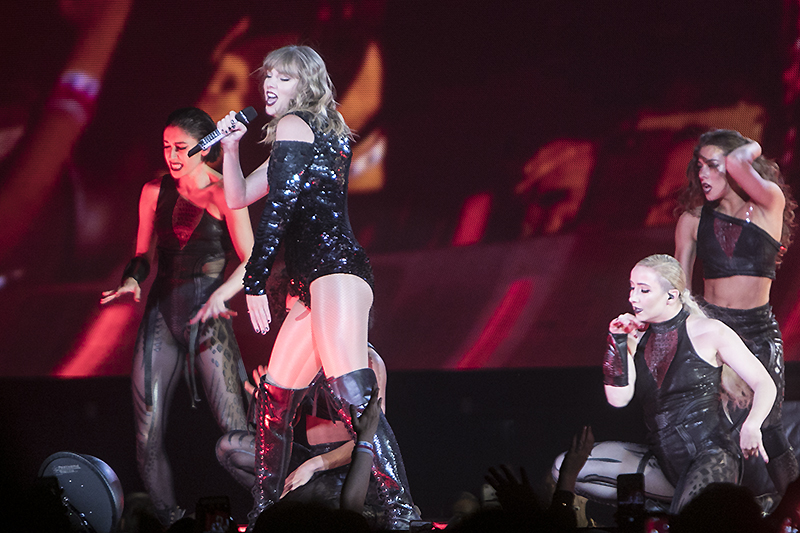 Now what could be the main rallying point that speaks to such a vast demographic of women? Is it Taylor Swift’s style?  Her stances dealing with the media or special causes?  Both of those are definitely in the mix, but speaking to her fans to get their take, the main connection mentioned was the way she speaks to them by relating her experiences through her songs. 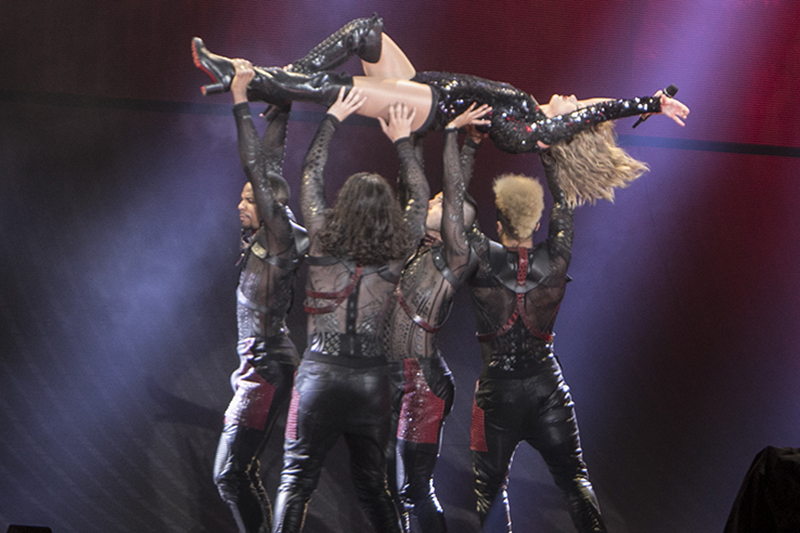 I almost spit out my $15 beer when I heard that, but then I thought harder and it made sense. Every girl no matter what age can relate to being dissed or dumped. Every girl can relate to suffering the pangs of love lost, unrequited, or trounced upon. Taylor Swift has absolutely hit the sweet spot of speaking to her fans through her music, and thus her popularity and success is not a fluke. 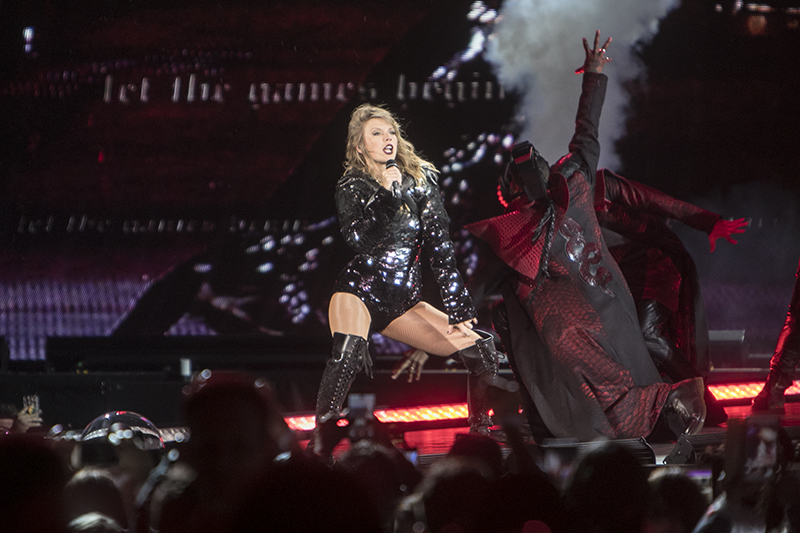 The flip side to this is that to many she comes across as a one-trick pony, continuously going to the same well and just slightly re-packaging the contents in a newer wrapper of over-produced beats. Factoring in the immense amount of ego that comes with the dazzling and glossy production provides endless fodder for Swift detractors, but witnessing the production will leave you in awe. It is like seeing two hours of non-stop Super Bowl halftime spectacle. 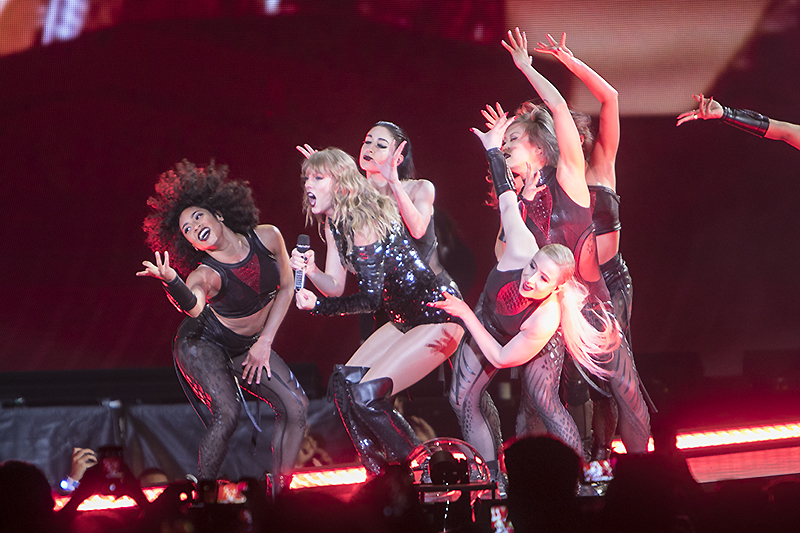 To begin the show, Joan Jett’s ‘Bad Reputation’ played, foreshadowing the faux ‘tough girl’ edge that is at the core of Swift’s Reputation tour. Backing this up was an intro video projected on the gigantic screens at either end of the stadium….quick cuts of Swift throughout her career and overlays of some of the vitriol that she has faced. 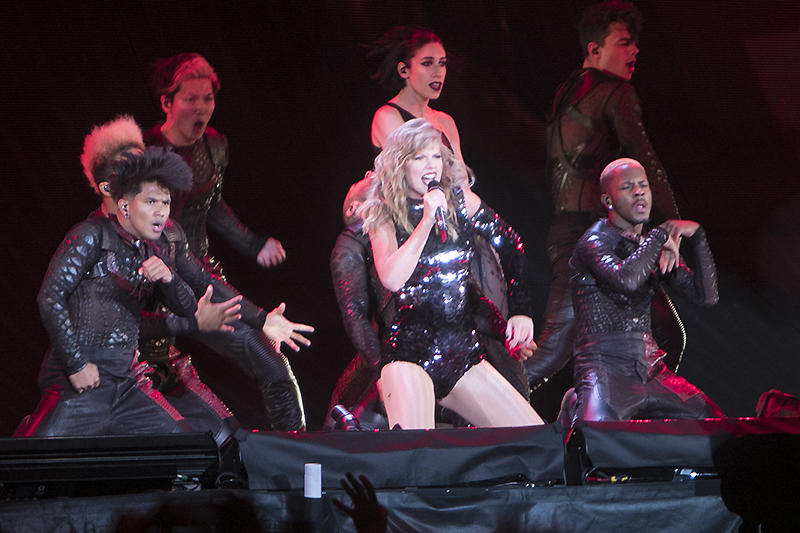 Swift then emerged on the huge stage to a burst of lights in front of a 50-foot high image of herself. Accompanied by a state of constant motion from her dancers, she blasted off with her ego on full display to the stadium bounce of the ultra-catchy ‘…Ready for it?’ (Reputation). The tribe of her fans went ballistic. 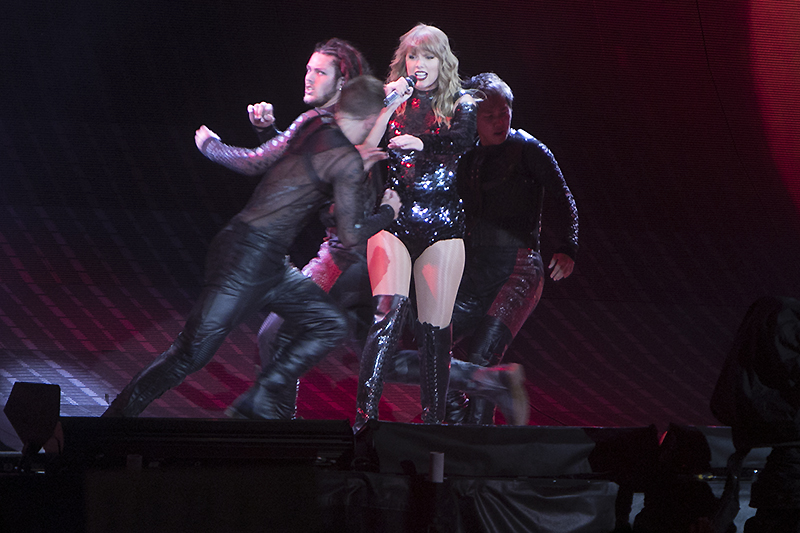 True that Taylor Swift is the star of the show, but in case you weren’t sure, you were constantly reminded in various ways, both subtle and not. An example of subtle could be the way that her very solid band was only rarely visible though they were playing for her practically the whole time. Shrouded behind the multi-media screens and scaffolding (the stage production was amazing by the way), the band was out of sight for at least 90% of the show. 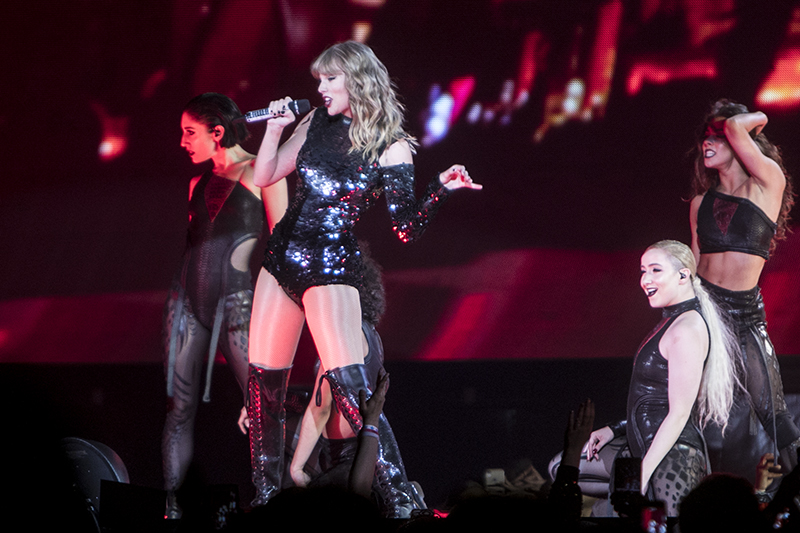 For the not so subtle, you only need to point to the performance of ‘Look What You Made Me Do,’ the lead single off Reputation and arguably the high point of the show. With an inanely sing-songy and repetitive chorus, this is an ode to the ego…just check how many times she says ”I” or “me” and how she refers to herself in the third person. 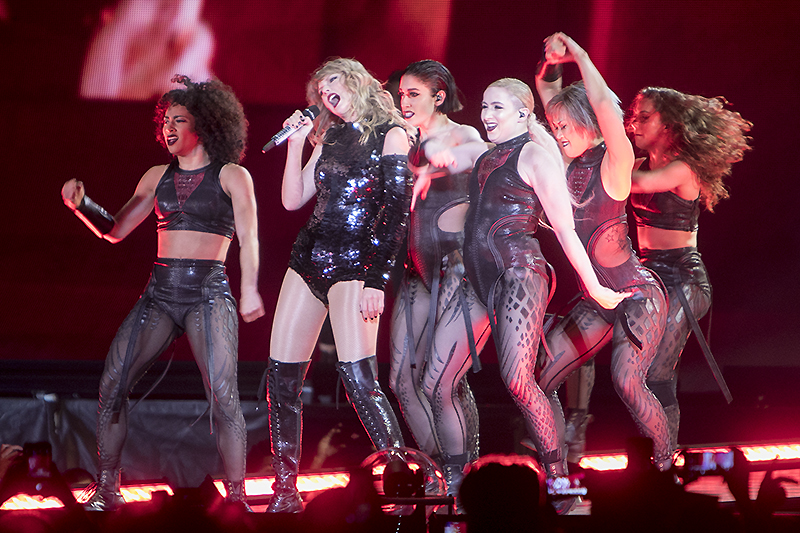 But when it is rolled up with a polished break beat that reminds of Madonna’s ‘Music’ (Hey Mr. DJ), the ego doesn’t matter because, as her fans educated me, it is all about Taylor and her music. The performance and production of this song was spectacular and the crowd ate it up and asked for more. 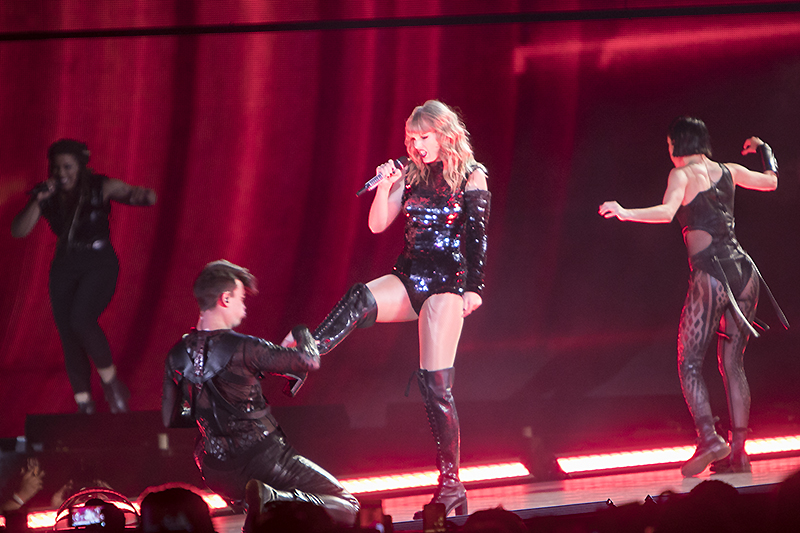 The rest of the evening was watching a master performer take advantage of cutting edge stage production. Considering that this was only the second stop on her tour (and the first of the stadium variety), the production was a mammoth effort that went off flawlessly. 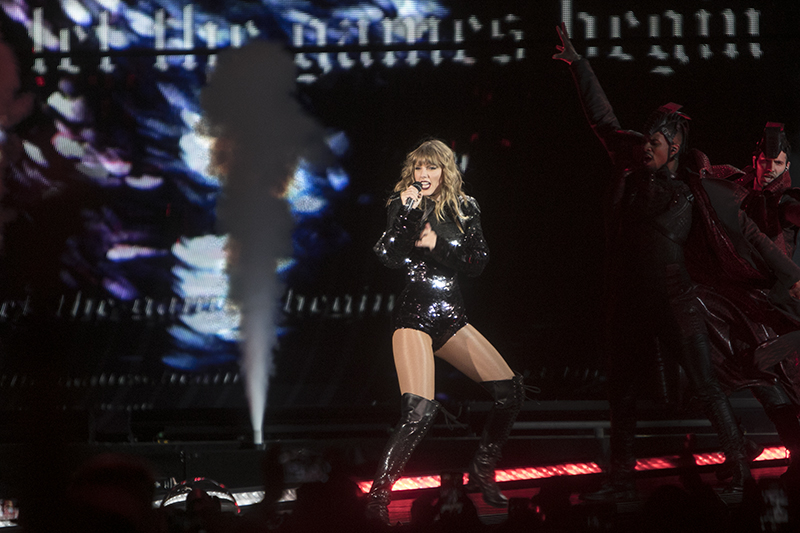 She literally levitated above the crowd from main stage to satellite stages and back (using cabled platforms and lifts), and the stages were each adorned with incredible laser lights and elements of a serpent motif that decades ago would have been more suited for Ozzy, and would have likely led to him being labeled a Satanist. 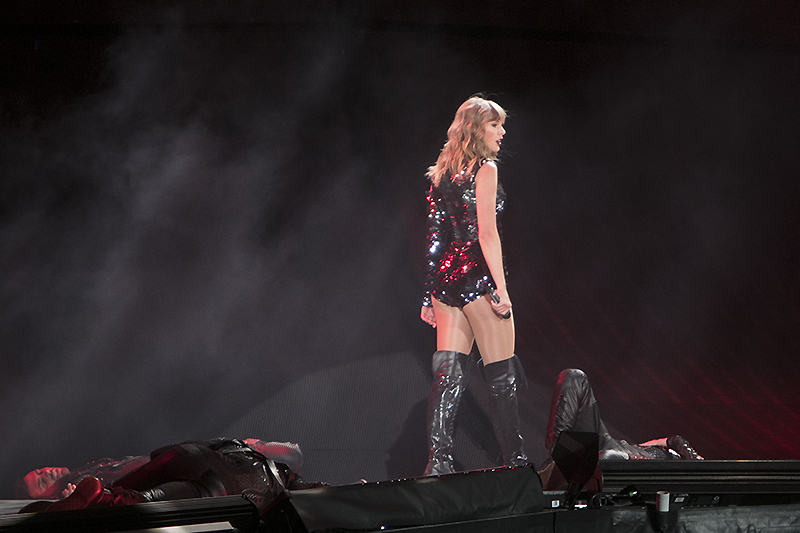 No matter where on the Taylor likeability spectrum you may be, 100,000 can’t be wrong. Through her sometimes gawky dance moves and her under-rated musical ability, it is Taylor’s world and she’s here to tell you about it.

Opening the show and also performing with Swift on an on-fire performance of ‘Shake It Off’ (from 1989 – 2014) were Charli XCX and Camila Cabello. Each has their own slant on the girl power vibe that was prevalent this evening.

While Charli XCX goes about it with a little bit darker alternative persona it is still bubble gum pop….think the Hot Topic store at the mall and you are close. Having leapt to fame through a series of mix tapes, and a collaboration with Iggy Azalea on ‘Fancy,’ Charli XCX made an impact on the early arrivers with her battle cry for school girls around the world ‘Break the Rules,’ and the dream pop of ‘Boom Clap’ (both from (Sucker – 2014).

Up next was 21 year old Camila Cabello who has a style and sound steeped in her Cuban roots. The songs during her set gave a noticeably Latin flavor to the pop beats….very Miami chic, and added interesting change up to the bill.  Throwing in a partial cover of Elvis’ ‘Can’t Help Falling In Love with You’ was a rousing sing along to the crowd who most likely thought it was her song, and ‘Havana’ (Camila – 2018) closed her set to a loud ovation. OK…gotta go brush my teeth now…too much sugary sweet pop for this kid.

Setlist: …Ready for It? | I Did Something Bad | Gorgeous | Style / Love Story / You Belong With Me | Look What You Made Me Do| End Game | King of My Heart | Delicate | Shake It Off (with Charli XCX and Camila Cabello) | Dancing With Our Hands Tied | The Best Day| Blank Space | Dress | Bad Blood / Should’ve Said No | Don’t Blame Me | Long Live / New Year’s Day |Why She Disappeared | Getaway Car | Call It What You Want | We Are Never Ever Getting Back Together / This Is Why We Can’t Have Nice Things

Find out more about Taylor Swift on her website.

Get all the info on Charli XCX here.

Everything you want to know about Camila Cabello can be found here.