Describing Swans is very much like describing the animal itself. Sure, explain its great orange beak, its soft feathers, its long, curved neck. One can easily conjure up the words. But to experience the bird is to understand its beauty, much like the New York based experimental group Swans. 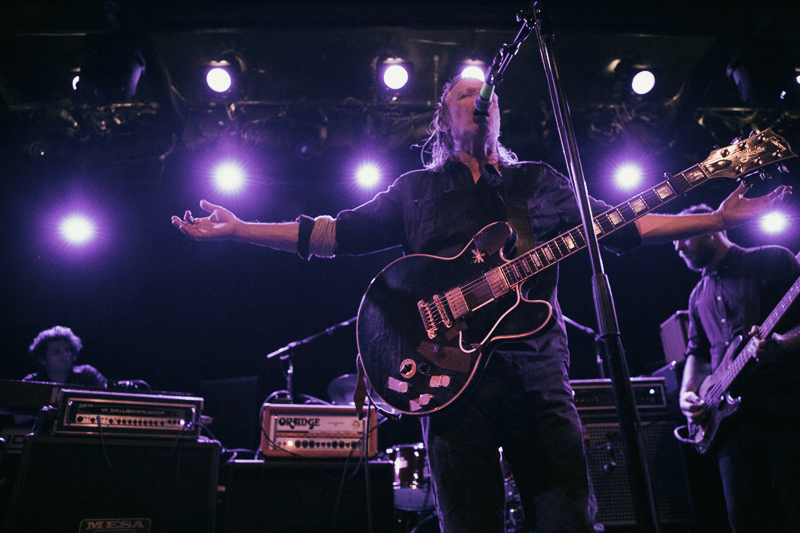 Leader Michael Gira is the band’s compass. It pointed north from 1982 to 1997 and again in 2010. A revolving cast of characters have come and gone but it’s always been Gira guiding the music. Throughout the years, the band has picked up several outfits from no wave to art-rock and folk to drone and industrial. Their recent output is more spacious, violent, at times ambient, and prone to epic conquests lasting over 30 minutes. 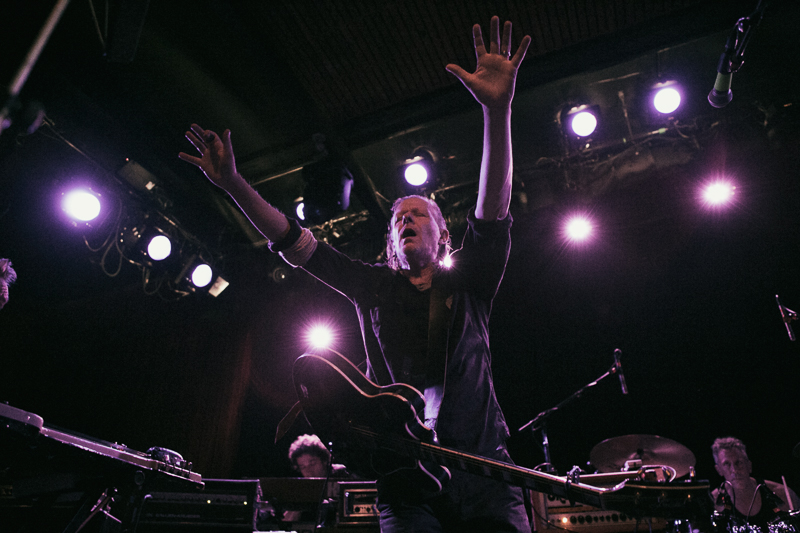 Starting with 2012’s The Seer, Swans have been crafting one of the best rock trilogies in recent years. Its sequel, To Be Kind, expanded the group’s following to unexpected numbers. Finally, last year’s The Glowing Man concluded with a final, brutal wail. But don’t fret, Gira promised this wasn’t Swans’ swan song after all but the end of this chapter for now. 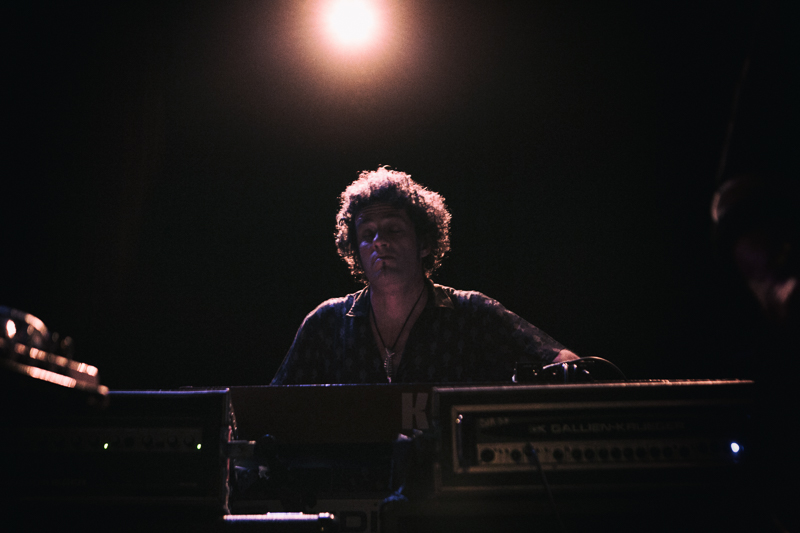 This tour is also coming to an end in November. Gira announced back in May that “The final Swans tour (for this exuberant and heroic iteration of the band) is in its final stages.” I urge you to come out and see them (just wear ear plugs.) 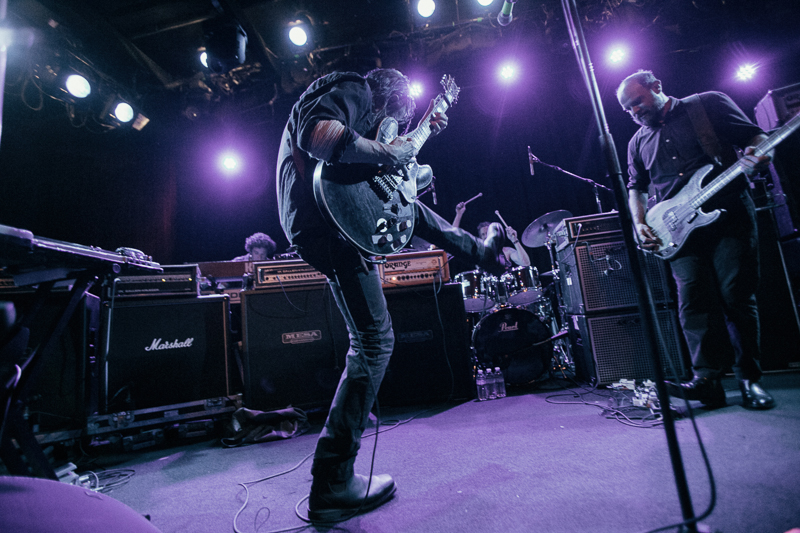 In San Francisco’s fantastic venue The Independent, Gira and group finally made it onto the stage. A bit of tuning and mic checks cemented the band into their places. The scene was set for war. 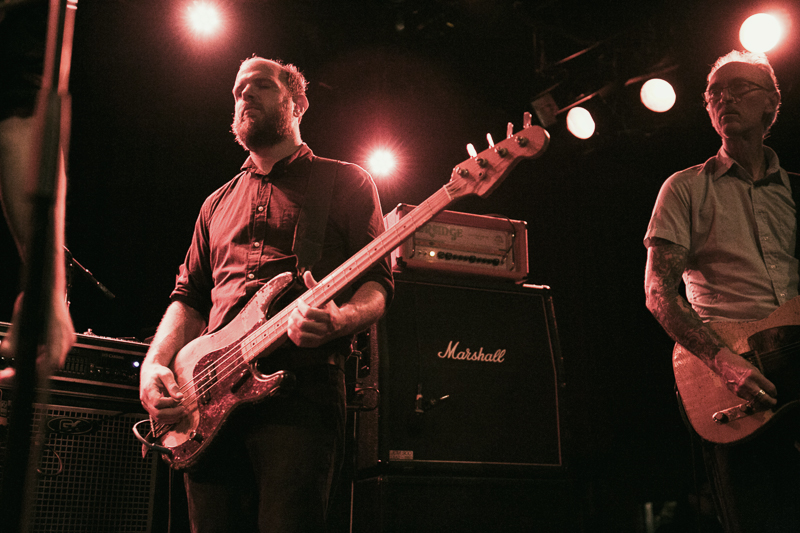 The first song of the night was the yet to be released “The Knot.” The intro is this slow burner that stars with this hazy, ambient single note from keyboardist Paul Wallfisch. Around six minutes in, Gira, long time Swans guitarist Norman Westberg, bassist Christopher Pravdica, drummer Phil Puleo, and lap steel guitarist Christoph Hahn entered with a startling punch from their respective instruments. 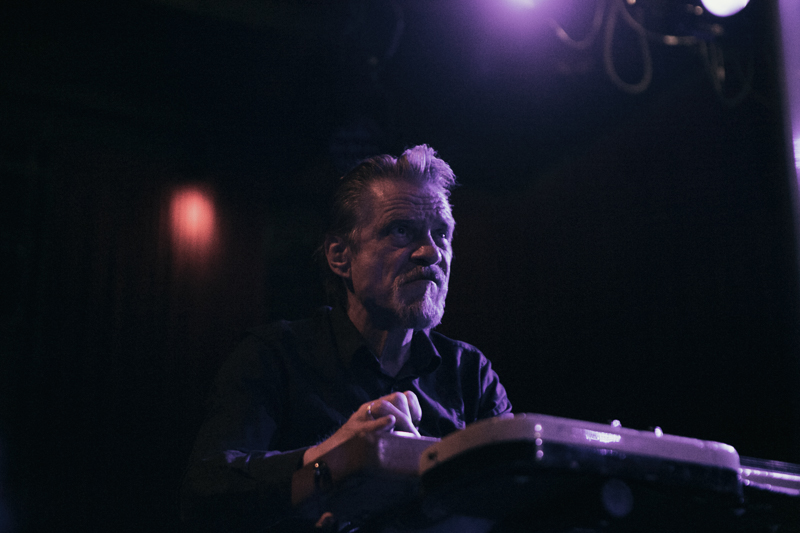 They continued to hammer on, letting each screeching note ring for a few seconds. This is common in second wave Swans albums. Usually the band starts soft, creates an atmosphere of trust, and when your guard is down they come to you at full force. After this assault on the ears, they let their sound taper off. The ripples of a once great sea of noise quickly dissipated as if it was never there. 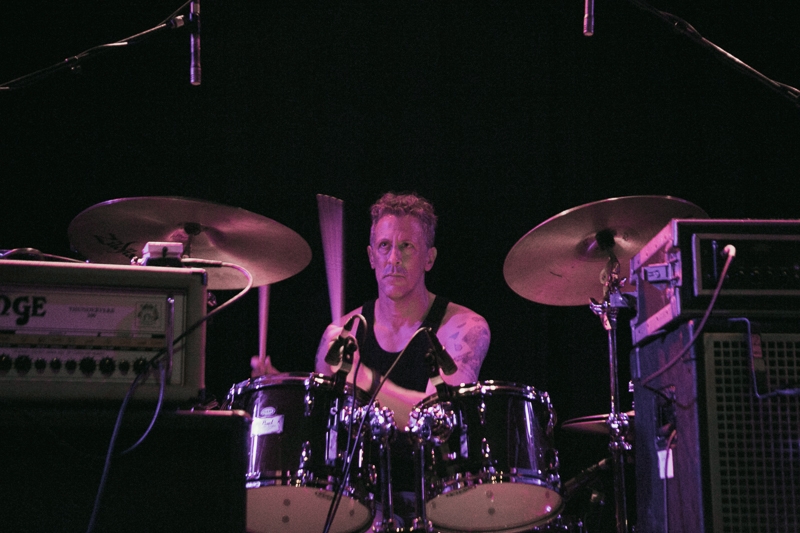 The song continued to travel through many instrumental passages. Often Gira would wail on the mic or would signal the band to play louder, more heavily. 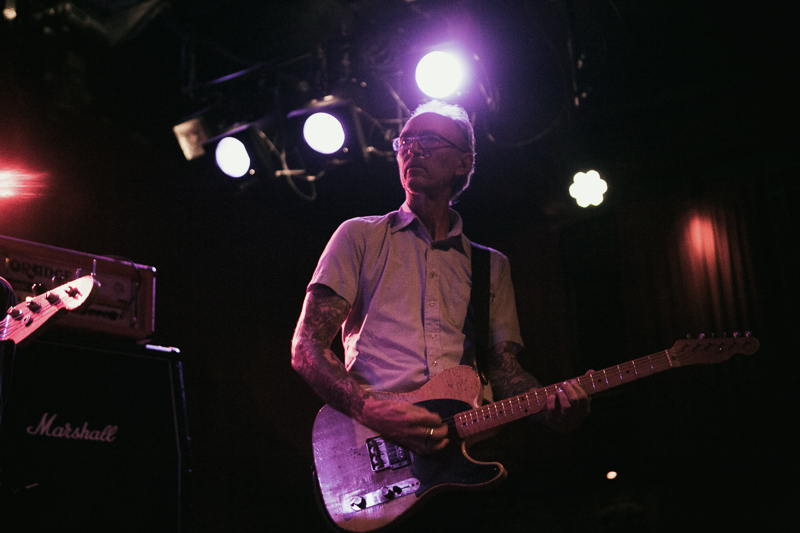 The next song was a track I recognized, the opener to To Be Kind titled “Screen Shot.” The song brings on this robotic, unsettling groove. The bass work from Pravdica is excellent and drummer Puleo kept following this riff with perfection. Gira went to the mic and shouted the lyrics, “No pain, no death, no fear, no hate/No time, no now, no suffering/No touch, no loss, no hand, no sense,” adding different words with each verse and ending the song hollering the words “Love! Now! Here! Now!” 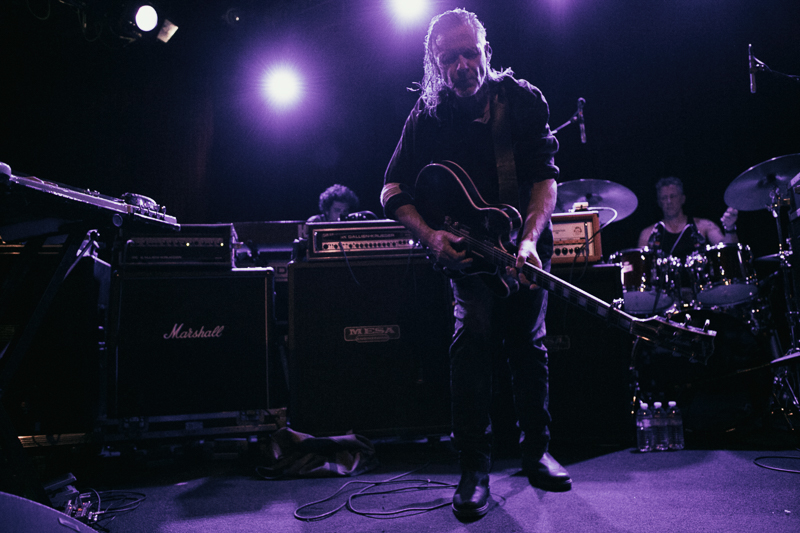 “Cloud of Unknowing” was the first track from The Glowing Man to appear on the setlist. Again, Swans took the audience on another lengthy instrumental tour. Monumental was each instrumental passage in this track. And again, the dynamic of music of that of heaven and hell intertwined. 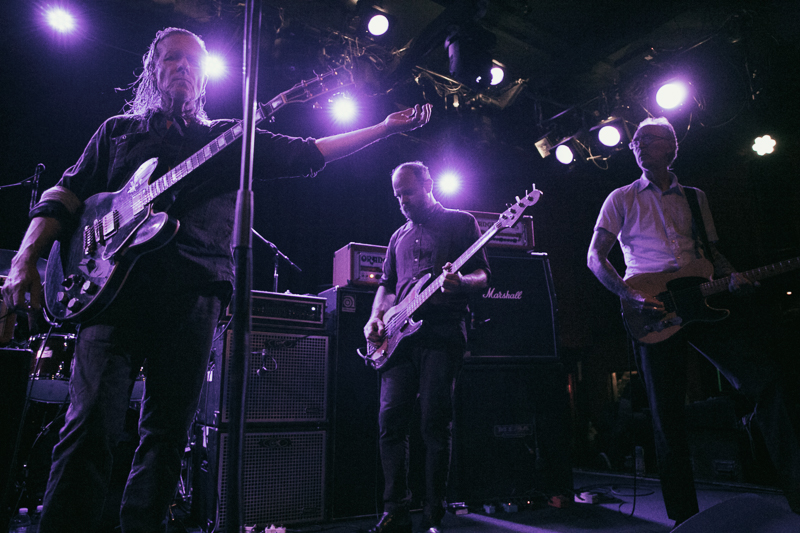 Another unreleased song came next. “The Man Who Refused to Be Happy” insisted on keeping along with its tedious riff that dominated most of the song. 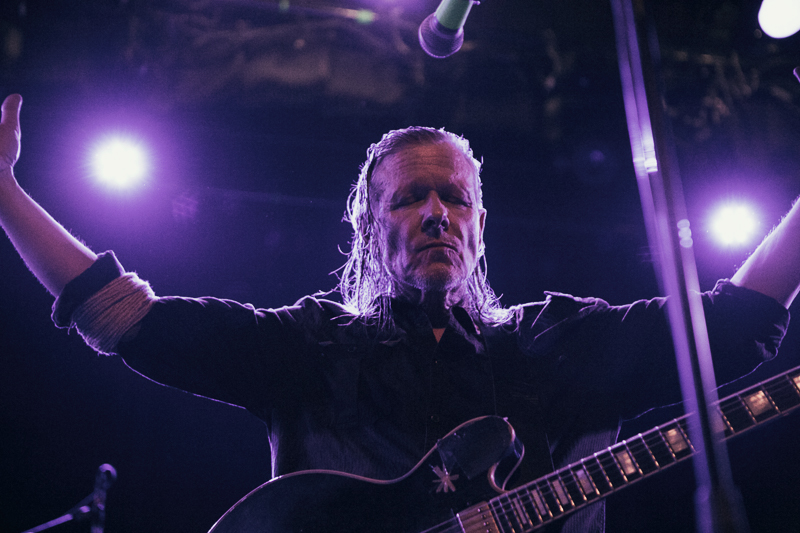 For the finale, Swans blessed us with the title track of The Glowing Man. It began with every guitarist strumming an endless chord that swallowed the entire room. Again, Gira instructed letting this sound fade into the ether. It was akin to Buddhist monks destroying their sand mandalas. Create something beautiful and let it go. 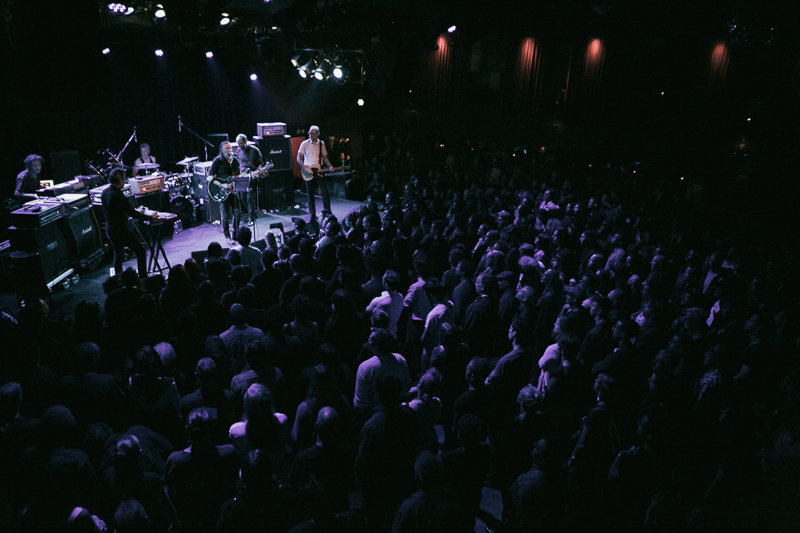 For a moment you find bliss and Gira takes it away from you. Around the seven minute mark, Swans beat their instruments into a pulp. Again and again and again and again the drums and guitars struck down with fury. As this song wove it’s terrifying web, the beat shifted into this almost danceable tune. Gira shouted, “Joseph is standing behind my back/ Joseph is digging his hands in my chest/ Joseph is drinking the light in my lung” adding other ways Joseph was abusing Gira.

Once the band saw fit to end, the audience had been standing for just over two hours.

Experimental cellist Okkyung Lee was the sole opener that night. With only her instrument and will power, she diced and sliced the thing with no mercy. It squealed and cried and begged but Lee continued on.

Setlist: The Knot | Screen Shot | Cloud of Unknowing | The Man Who Refused to Be Unhappy | The Glowing Man