Legendary noise-rock outfit Swans came to the Regency on a September Saturday night, exposing the audience to their overpowering and devastating sound. Perhaps sensing the finality of the moment, the venue was filled to the brim with people by the time the band began playing; frontman M. Gira has said that this will be the final tour for Swans as he wishes to pursue other projects. The group began with a newer composition they have been rolling out on this tour, known as “The Knot.” 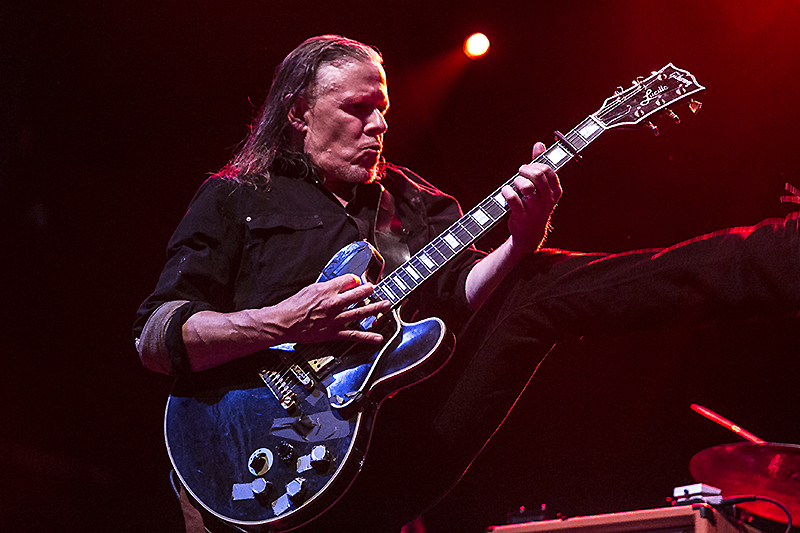 The piece begins with swelling feedback along with delicate piano, only breaking from this periodically as the band briefly came through in full force before dialing things back again. This push-pull dynamic is the heart of Swans’ sound with this current lineup – alternating between two opposing musical approaches, many times during the same song. It is hard to really pick out individual songs as the vast majority of the songs that were played were incredibly long, as the band managed to extend what were already lengthy pieces of music. In addition many songs blended seamlessly into the next one, making it difficult to discern where one ends and another begins. However it became pretty apparent when the band was done with “The Knot” as they began to play the primal and extreme “Screen Shot.” 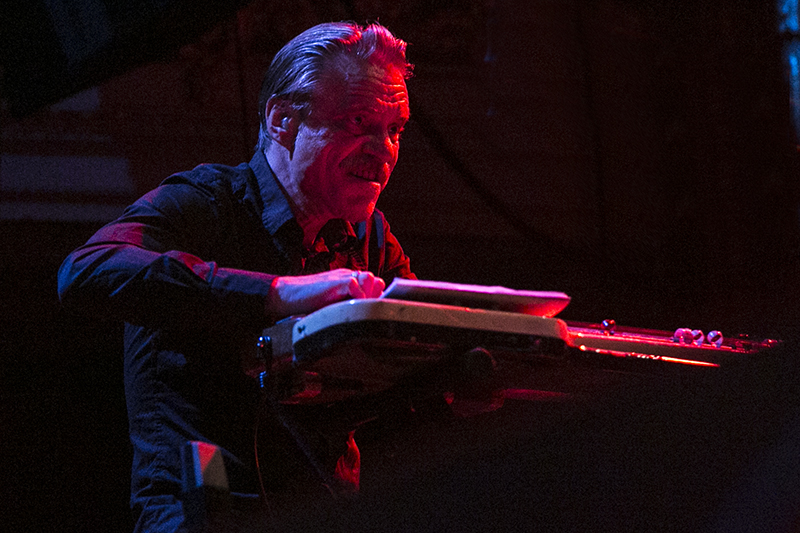 Built around a pounding single chord drone from Gira, the song manages to reverberate across your entire body thanks in part to the dizzying array of amplifiers hooked up to the sound system, giving the band a significantly punchier attack, particularly at lower frequencies. After bludgeoning your senses for just the right amount of time, Gira began to sing in his trademark harsh monotone delivery, spewing out dense and poetic lyrics over the crunching rhythmic attack. Next up was the sprawling and epic pairing of the “Cloud of Forgetting” and the “Cloud of Unknowing” from the band’s latest (and final) release, The Glowing Man. “Forgetting” begins with a massive and lumbering guitar figure, alternating between loud and soft dynamics over which Gira laid down another fiery set of vocals. Drummer Phil Puleo then began to ever so slightly pick up the pace, until he came in with a snappy and propulsive drum beat which launched the song into overdrive as Gira began to shout and scream at the top of his range. After a wild and feedback drenched ending the group began yet another epic, “The World Looks Black.” 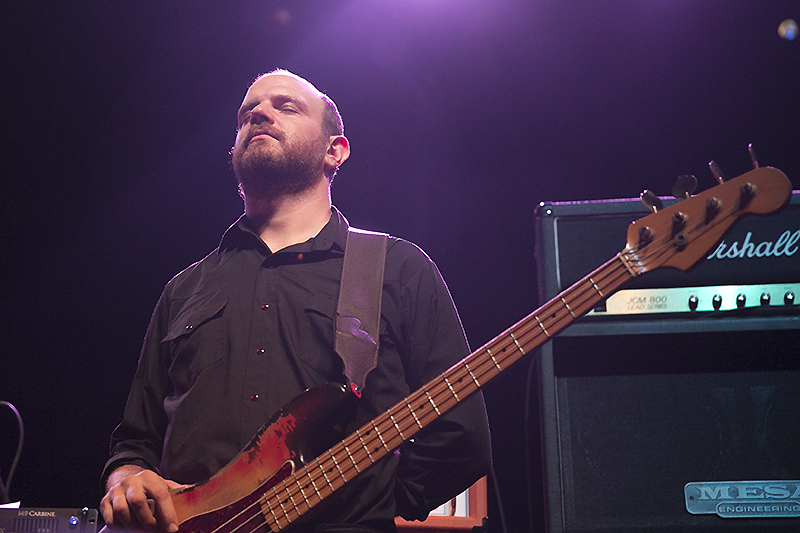 Beginning with a mournful piece on lap steel guitar from Christoph Hahn, the track suddenly picks up steam to end in what seemed like a pummeling and visceral ending, but only for a brief moment as the atonal drone slowly morphed into something else entirely as bassist Christopher Pravdica began to play a sinister and distorted bass line singling another change of feel as he and Puleo locked into each other. The song then exploded into yet another chaotic ending with some of the most primal and abrasive screaming of the night, only to resolve itself with a snappy and jazzy coda. 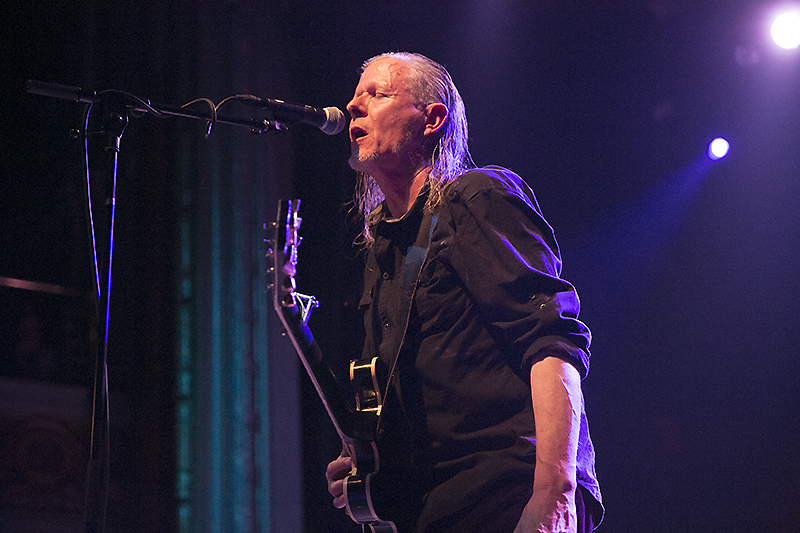 To close out the show, Swans rolled out the monolithic “Glowing Man,” overwhelming the listener with its opening bass throb that quickly devolves into an abrasive, atonal, painful free form before abruptly changing feel again. Over the course of thirty plus minutes the song unfolds into a speedy and driving section, producing the fastest tempos of the night only to burn out into another impossibly heavy drone that managed to once again sonically assault the audience. Just when you thought the song was over, Pravdica locked into another limber bass line as Hahn chaotically attacked his lap steel, managing to pull all kinds of crazy sounds out of it, some resembling a car engine revving up and down. Gira continued to deliver a passionate set of vocals over the chaos before the song slowly faded into a familiar drone of noise and feedback. 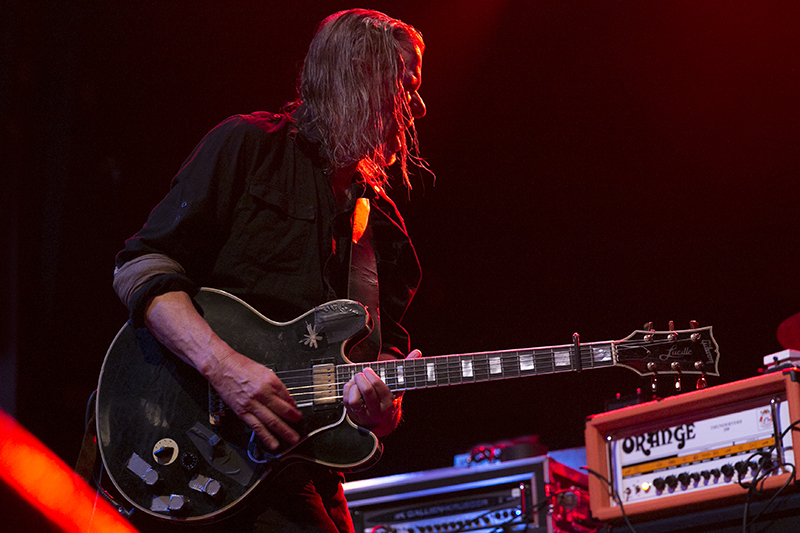 These sounds left the audience with that incredible sense of awe and finality as the final notes rang out. Swans are a difficult band to witness live because they demand so much of the audience: they demand that you meet them on their level. This task was accomplished on this evening, once again showcasing the devastatingly effective power of this version of the band and bringing a fitting end to one of the most unique and prolific acts out there.