Supporting their latest record Caught Up in the Gear of Application, New Orleans supergroup Superjoint returned to San Francisco after a 10 plus year hiatus recently, and judging from rabid metalheads who spent the evening with their fists in the air while slamming into each other it, they could not have been more welcomed. 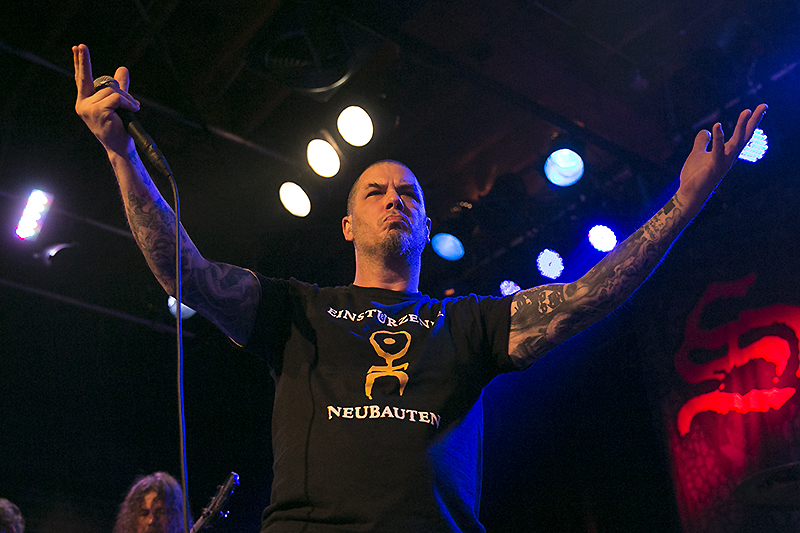 Superjoint disappeared for all those years due to a split between Phil Anselmo and Joe Fazzio. The band, originally dubbed Superjoint Ritual, reappeared in 2014 at a horror film festival, reappearing again a year later for another festival, this time just music, with all the horror being provided on-stage. Again a recording band, the latest tour took off, coming to Slim’s.

Taking the stage and telling the crowd “Let’s have a good time, you fucks,” leader Anselmo launched the band into “Oblivious Maximus,” off of their Use Once and Destroy record. Guitarists Jimmy Bower and Kevin Bond supplied the winding and sludgy riffs that they are known for but delivered them with a somewhat frantic punk rock pace at times.

Superjoint focused heavily on their new record, playing “Ruin You,” “Burning Blanket,” “Sociopathic Herd Delusion,” and “Asshole.” Anselmo was his ever-enigmatic self, and his voice sounded stronger than it has in years, as he belted out the lyrics and pointed his microphone into the faces of the fans in the front row smashed up against the barricade. He had the fans in the palm of his hand, often reaching over the barricade to shake their hands and give them high-fives.

Wrapping up their set with “Ozena,” “It Takes No Guts,” and “Everyone Hates Everyone,” it was quite apparent that Superjoint is back, and are hopefully in it for the long run.

Direct support for Superjoint on this tour are Battlecross, the Detroit thrash metal road warriors, who delivered a short but powerful set that brought the crowd to the front of the barricade, ready to bang their heads. They most certainly did not disappoint and left the crowd anxious for the headliners.

For more information about Superjoint, check out their Facebook page.