‘Progressive’ rock is one of the more polarizing genres on the musical spectrum. Most people either love it or loathe it. To the uneducated, progressive rock equates to over-indulgent songs about fantasy worlds that are too long, with too many parts, and are designed predominantly for an audience of nerdy males. 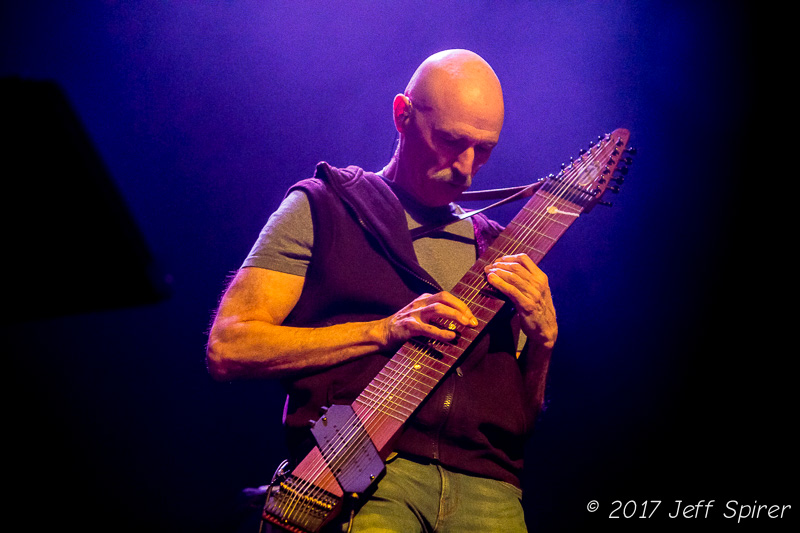 To diehard fans, prog rock is the only real kind of music. The last bastion of true musicianship, created by artisans who have honed their craft over a lifetime, and pour themselves into each creation. It was for this group of fanatics that the Wednesday night bill at The Regency, featuring Stick Men and the Neal Morse band, was formed. 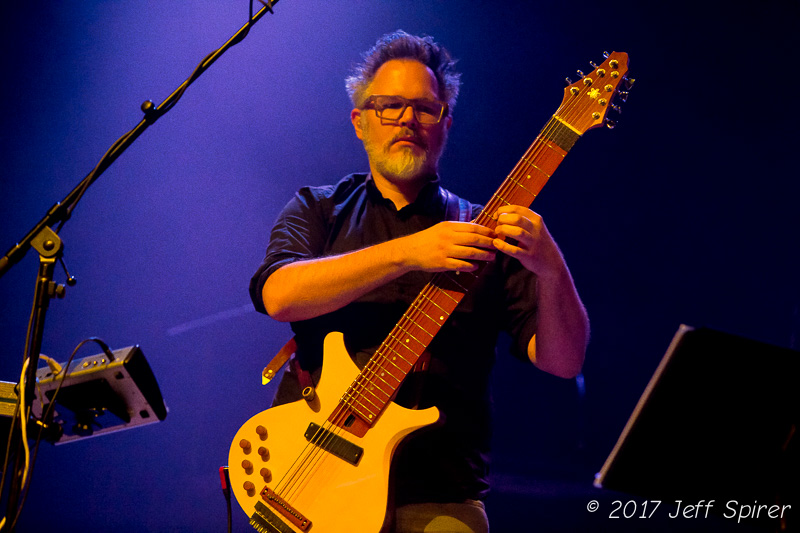 While it is true that the audience was predominantly male (approximately 90%), the group in attendance was definitely in the camp that prog rock is the music, and all other genres pale in comparison. 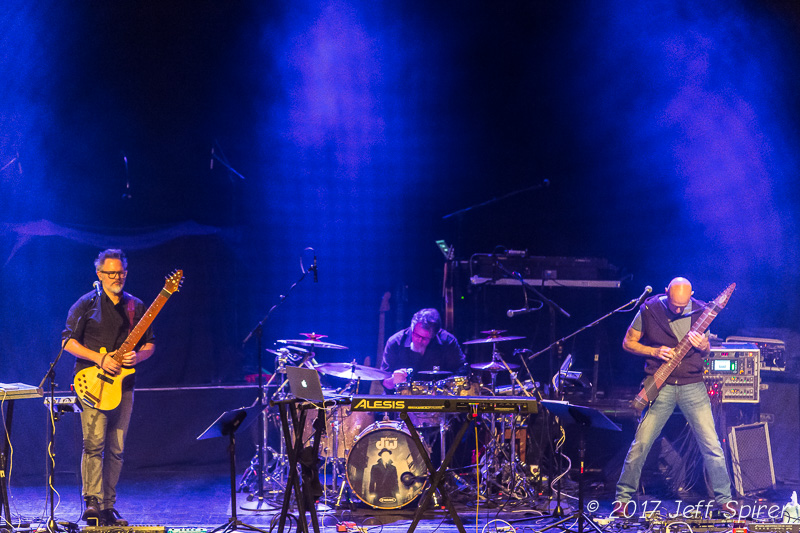 Starting out this evening of progressive rock co-headliners, Stick Men (featuring the inimitable Tony Levin on Chapman Stick, Markus Reuter on U8 Touch Guitar, and his doppelganger Pat Mastelotto on drums) took to the Regency stage and unloaded one galactic journey after another. 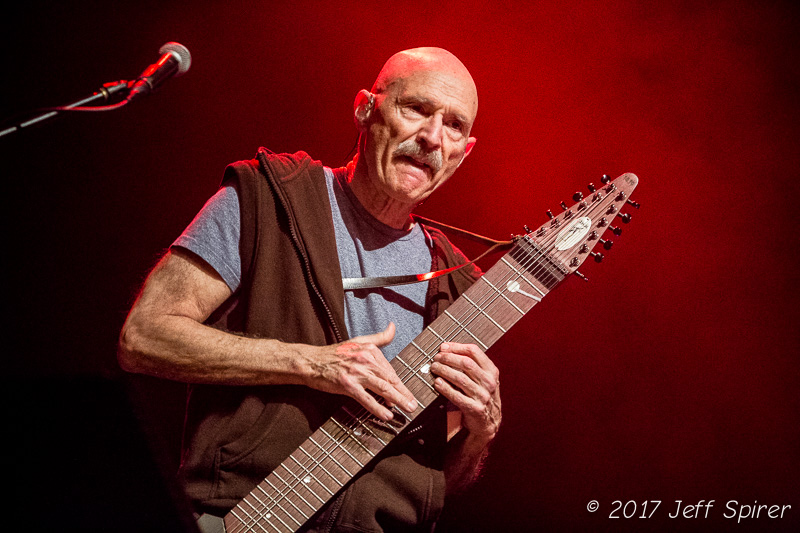 Onstage Stickmen are odd, and by odd I mean unique and different….in an intriguing and good way. Playing odd looking instruments, Levin on his 10-stringed and 12-stringed Chapman Sticks, and Reuter playing his 8-stringed Touch Guitar, both use two-handed tapping techniques to cast the illusion of 4 people playing. They are a waterfall of soundscapes and textures with Mastelotto (like Levin stepping away from his day job as a member of King Crimson) contributing to the ‘odd’ from behind his drum kit by cracking out unusually timed structure to the improvisational fireworks of Stick Men. 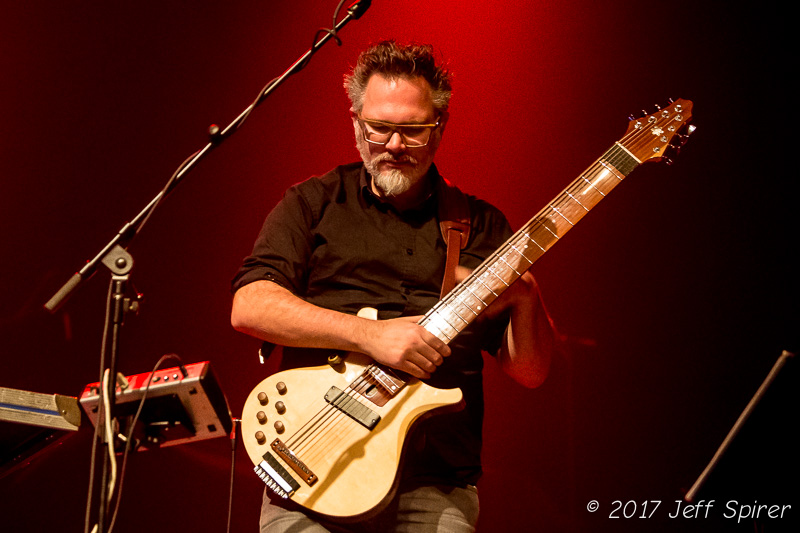 The way they play is a bit odd too, compared to the traditional idea of how a rock band plays. There is no bombast to the stage show, no contrived choreography or stage histrionics. Just amazing musical virtuosity….with Reuter swaying in place and Levin hunched over his stick almost guarding it like it is his ‘precious.’ 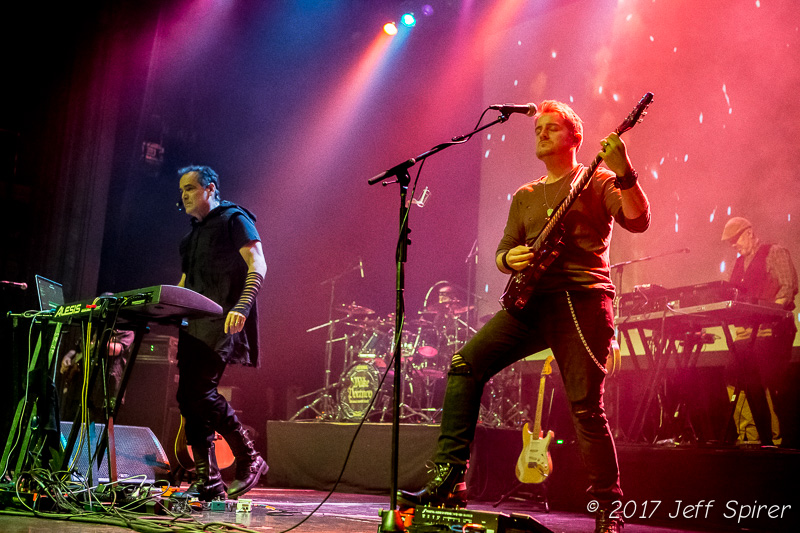 It was a marvel to watch as the trio pushed through an 11-song set capped off by the closing trifecta of ‘Prog Noir’ (the title track on their latest recording), the maniacal King Crimson composition ‘Level Five,’ and the opus of a closer ‘Open Part 3 – Truncheon.’ Though the crowd gave a roar of approval that would normally prompt at least another 30 minutes of musical exploration, Stick Men graciously took a bow and cleared the way for the progressive rock to morph into the complex world of The Neal Morse Band (NMB). 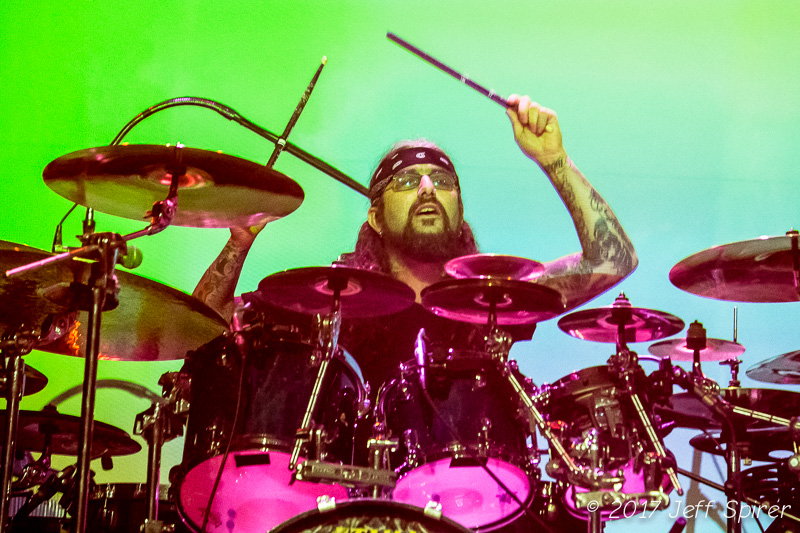 Despite being in the same prog pocket, NMB is a completely different beast. Where Stick Men are more into free running with long psychedelic passages of improvisational time travel, NMB are rooted in the conceptual side of prog rock. The Neal Morse Band (Neal Morse – vox / guitar/ keyboards, Mike Portnoy – drums, Randy George – bass, Bill Hubauer – organ / synth, and Eric Gillette – guitars / vocals) has been together since 2014 and is a fabulous collection of musicians that all excel on their respective instruments. 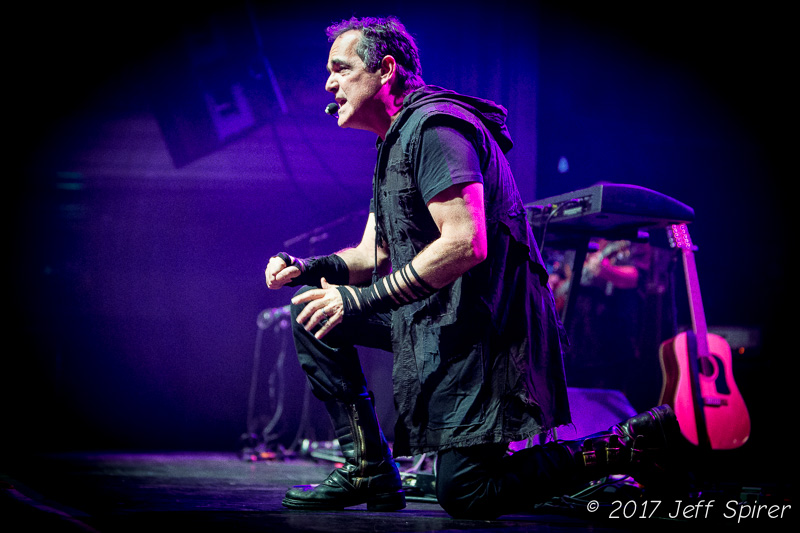 Highlighted by the past success enjoyed by Portnoy with Dream Theater and Morse with Spock’s Beard, NMB had their fans primed for a set which would see the band play their latest album The Similitude of a Dream (released November ’16) in its entirety. 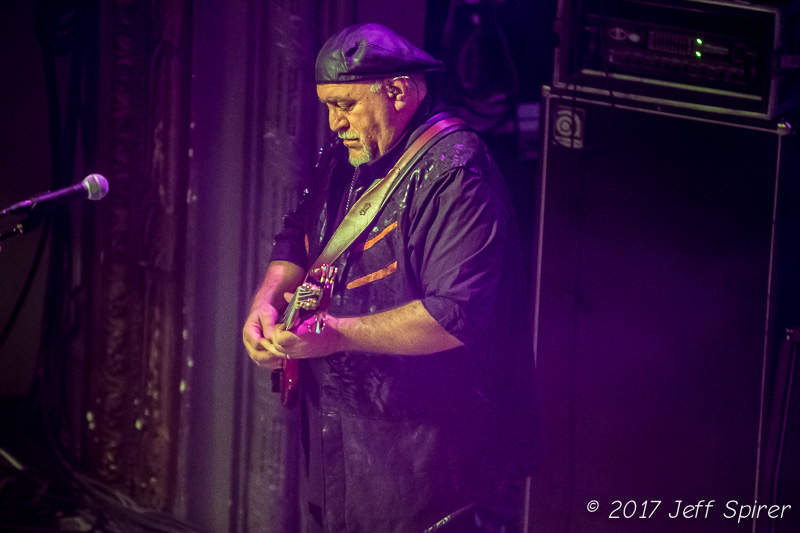 The Similitude is a concept album based around the book The Pilgrim’s Progress by John Bunyan. The conceptual element, and the sound and delivery of the music is reminiscent of The Grand Illusion by Styx. The tones of the organ and synth of Hubauer and Morse along with the crystal clear higher range tone of Morse’s voice make the parallel more evident. 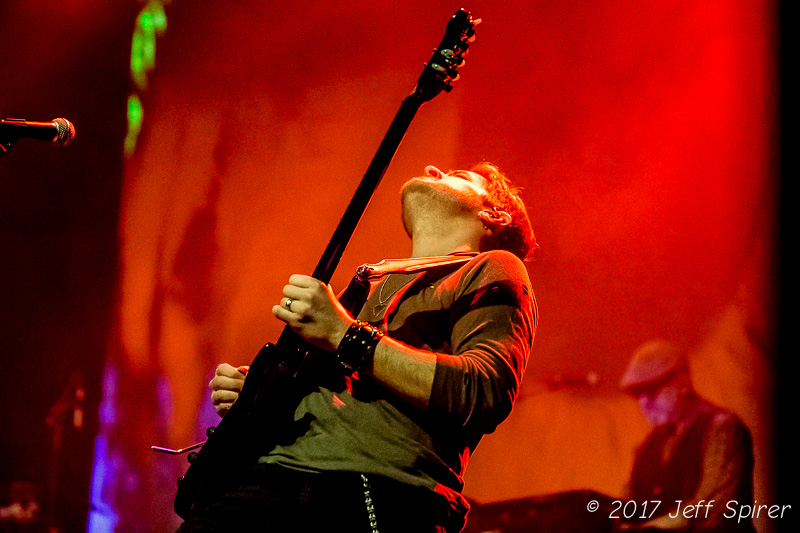 This is where the take it or leave it perception of progressive rock sometimes being overly dramatic pulls NMB into a different realm than the space bending of Stick Men. NMB performed a tight set that was more akin to a rock opera in its delivery. Morse dressed in a hooded shirt, and at one time even sported a ‘phantom of the opera’ styled mask during the set. 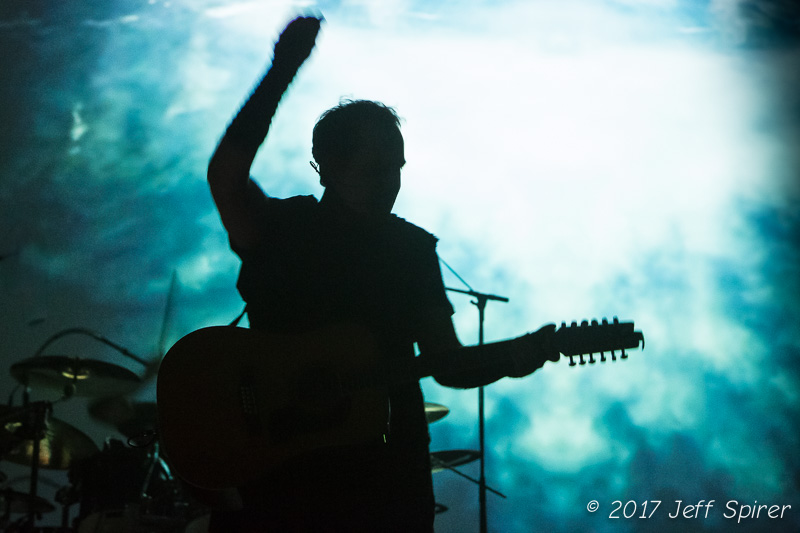 This sense of dramatics may seem somewhat over the top to some, but NMB fans ate it up as they watched the uber-talented band tear through The Similitude with a vengeance that was balanced by technical, hard-charging orchestrations and sweeping movements with a more baroque presentation. 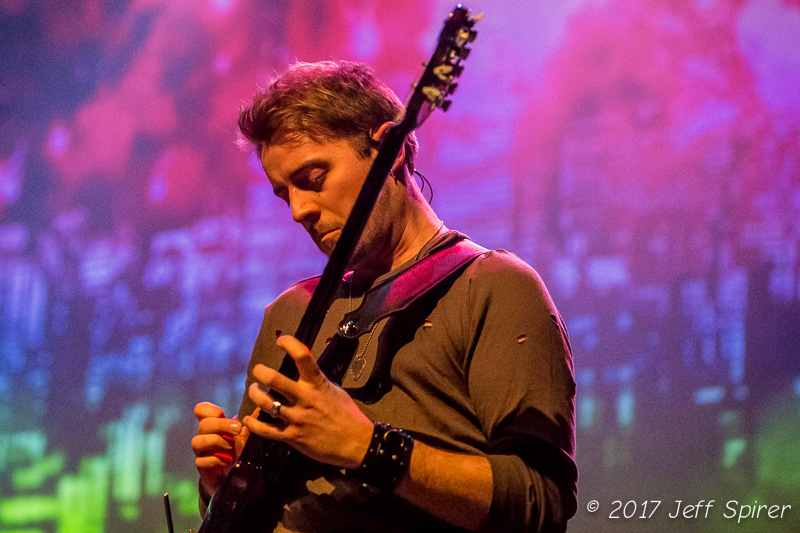 From the opening of the ‘Long Day’ and through ‘Overture’, all the way to the Similitude ender ‘Broken Sky / Long Day (Reprise)’ and the encore ‘The Call’ (The Great Experiment), NMB evoked images of all the progressive rock greats, giving glimpses of Yes, Rush, Emerson Lake & Palmer, and even Dream Theater. The great experiment seems to be working, as their dedicated fan base continues to grow and NMB keeps the dream alive.

Setlist: The Similitude of a Dream Long Day | Overture | The Dream | City of Destruction | We Have Got to Go | Makes No Sense | Draw the Line | The Slough | Back to the City | The Ways of a Fool | So Far Gone | Breath of Angels | Slave to Your Mind | Shortcut to Salvation | The Man in the Iron Cage | The Road Called Home | Sloth | Freedom Song | I’m Running | The Mask | Confrontation | The Battle | Broken Sky / Long Day (Reprise) | The Call

For more information about the Neal Morse Band, see their website.