During the holidays you can never be sure what you are going to unwrap from under the tree, especially when pulling presents from the live music tree here in the Bay Area. Case in point, on a Wednesday night at the SAP center in San Jose, a filled arena was treated to the unlikely duo Stevie Nicks and The Pretenders. 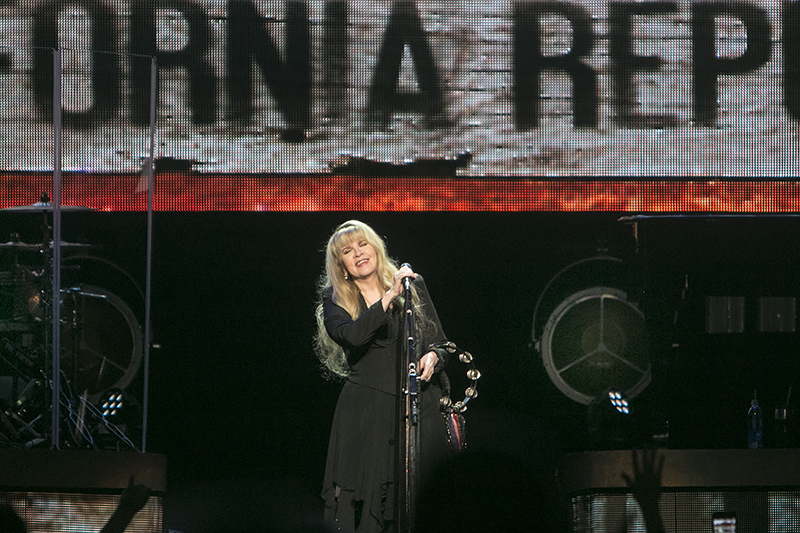 Sure there are similarities. Stevie Nicks and Chrissie Hynde are both rock and roll hall of famers that were inducted with their respective bands of English / American origins….Fleetwood Mac and the Pretenders. Both are also pioneering and influential women in rock who started on their paths to stardom in the 70’s. But that is where the resemblances generally stop, which is why this pairing of female superstars (which pulled the Pretenders out of a 4 year hiatus) is so noteworthy. 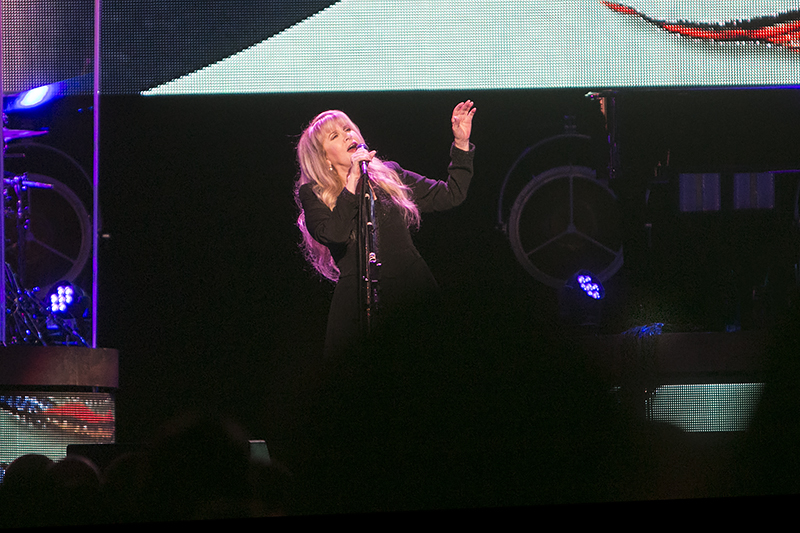 Headlining the evening (and the 27 date tour dubbed the ’24 Karat Gold Tour’) was Stevie Nicks. Appropriately there were plenty of long flowing black skirts, shawls, capes, and steampunk inspired hats worn in the crowd. This was a homecoming for the queen of rock and roll who attended San Jose State, and also went to Menlo-Atherton High School (where she was runner up for homecoming queen). 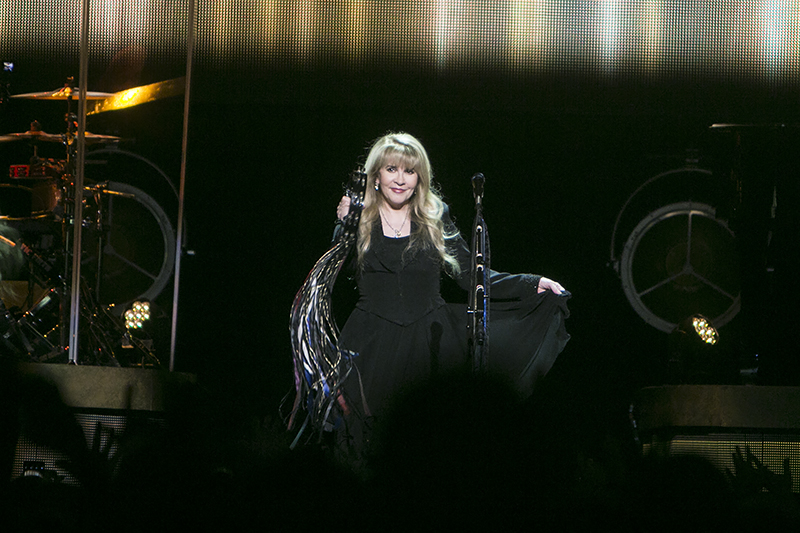 Throughout her set, which was a rolling interchange of hits from her catalog and Nicks’ story telling about the influences for her songs, she repeatedly stressed that “San Jose is my musical birthplace…where my life in music truly came to be.”

The crowd at this early weeknight show was primed and in good spirits, and were hanging on every word that Stevie had to say, with loud cheers every time she mentioned her Bay Area roots. But the biggest cheers took place as she rolled through the rock hits that have remained FM rotation staples since she started writing music with guitarist (and Fleetwood Mac partner) Lindsey Buckingham back in the 70’s. 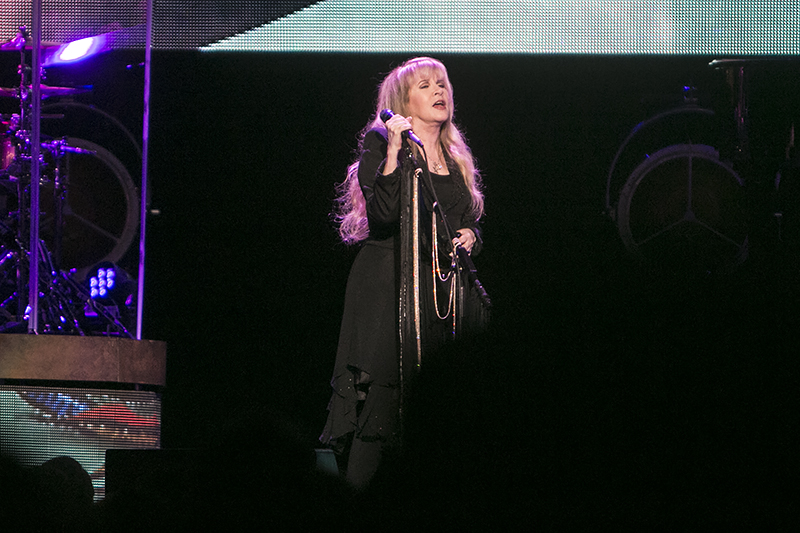 Reaching into her “gothic box of mysterious and forgotten songs,” Nicks started the show with ‘Gold and Braid’ which was conjured during the epic Bella Donna (1981) sessions; however it did not make it on the release of the album. The crowd locked in on the hidden treasure and lifted off with Stevie at the helm to embark on an 18-song set which polished faded memories and shined light on friends from the past. 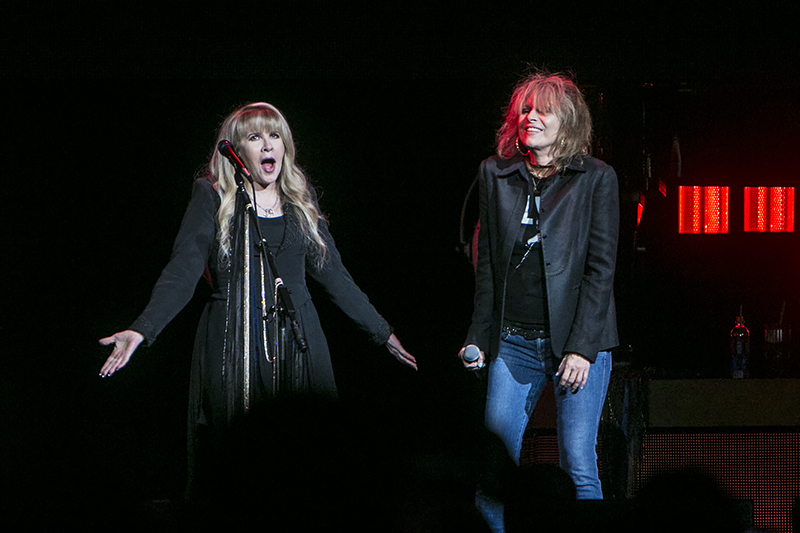 Speaking of friends, it was none other than Chrissie Hynde that came out to duet with Nicks on ‘Stop Draggin My Heart Around,’ belting out an amazingly good Tom Petty imitation and setting a high bar for the remainder of the journey.

With a spectacular band (including guitarist extraordinaire Waddy Wachtel) and fabulous background singers, Nicks focused primarily on songs from her solo albums but also satiated the crowd with just the right amount of Fleetwood Mac tunes.

The particular standouts of the regular set were her big solo hits ‘Stand Back’ and the closer ‘Edge of Seventeen’ (which brought down the house), but it was the tease of Fleetwood Mac (a stellar ‘Gold Dust Woman’) that left her enthralled fans crying for more. 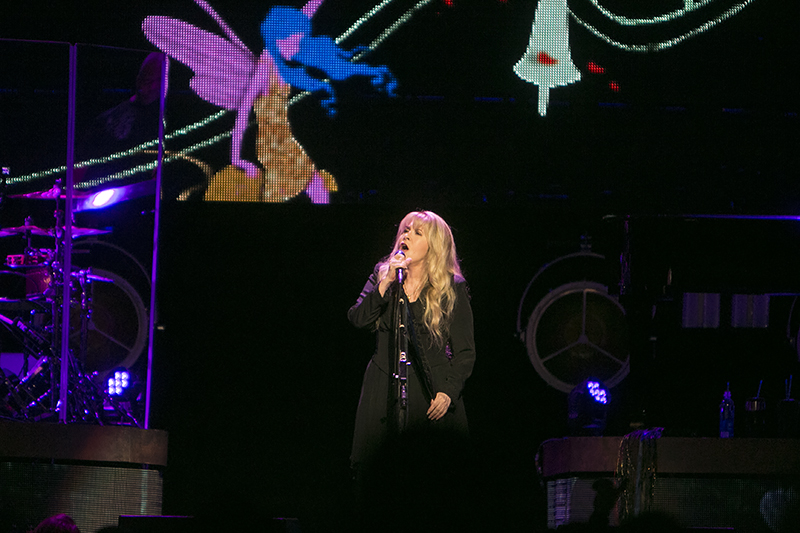 Returning for a two-song encore she brought the goods that folks craved, gracing the stage for ‘Rhiannon’ and the crowd favorite ‘Landslide.’ On the latter it seemed that every woman (and a few of the men) were out of their seats and singing along word for word. 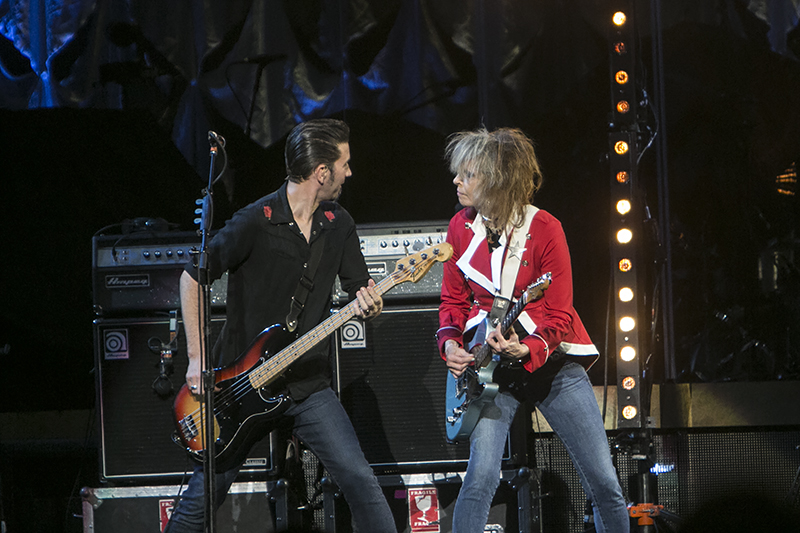 Though Stevie Nicks brought the evening home, it was Chrissie Hynde and the Pretenders that initially coaxed the crowd out for a bit of rock n’ roll mischief. Until this tour, the Pretenders hadn’t played live shows since 2012…for anyone witnessing the rock, you would have never known it. 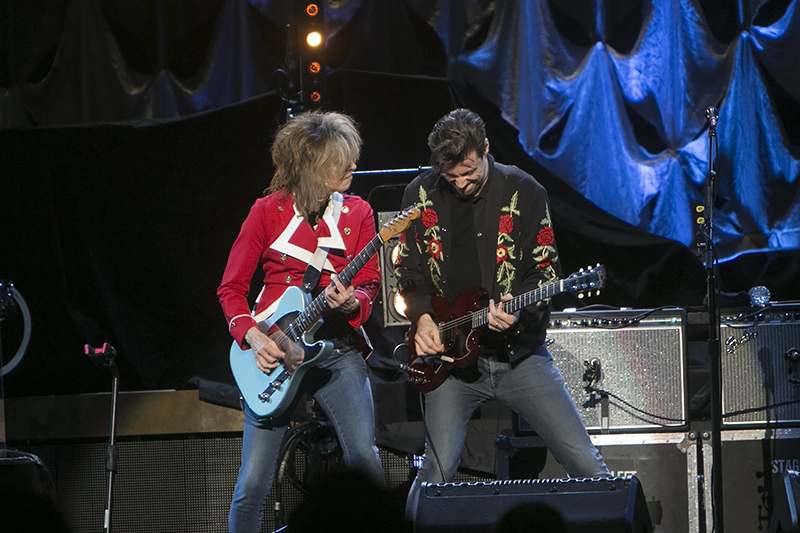 Hynde and her cohorts (including a return behind the drum kit of original member Martin Chambers) unleashed a 90-minute set of the defiant punk-tinged rock that they have been famous for since their inception in 1978. 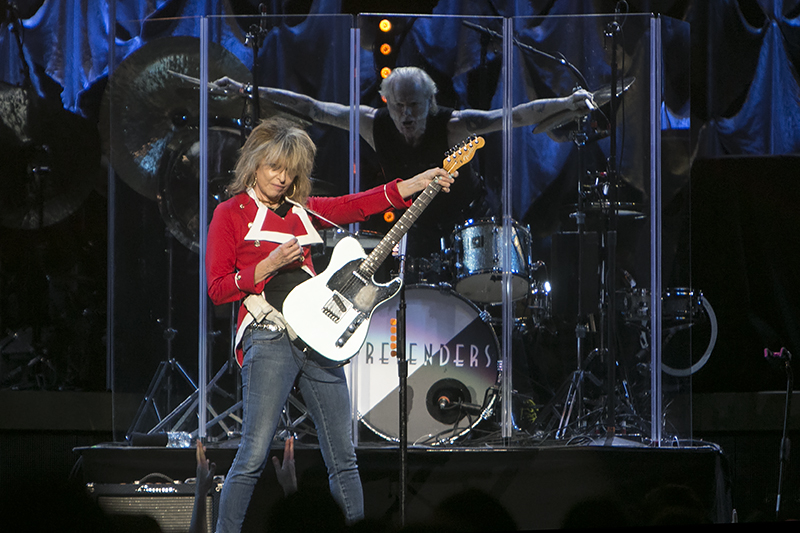 Wearing a stylish bandleader jacket, Hynde looked magnificent, sporting a shaggy mop of dyed blonde hair and strutting the stage as she played guitar (and she really does play – unlike many lead singers who now wear guitars as ornaments and ‘fake’ play). 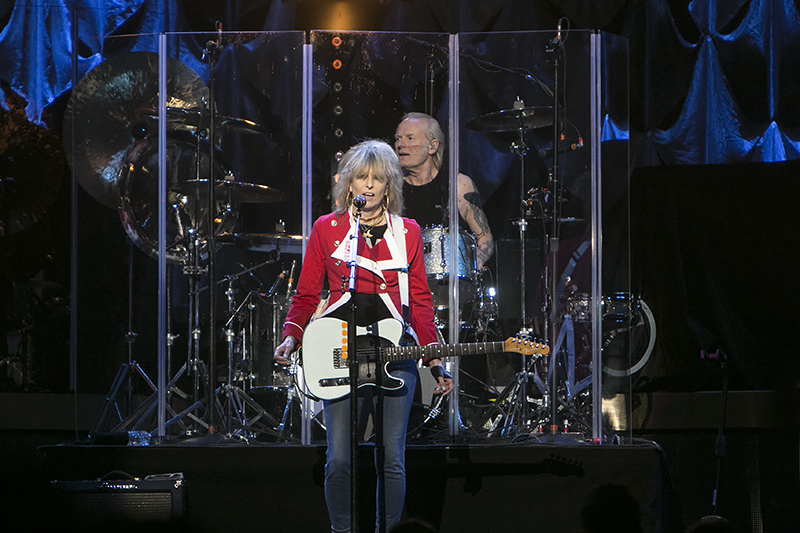 If there was any question as to who directs this band, Hynde masterfully dispelled doubt during ‘Message of Love.’ The band had a brief hiccup during the transition to the chorus, and without missing a beat Chrissie could be hear off-mic yelling out the chord changes, immediately course correcting the song.

Despite their absence from performing over the last few years, the Pretenders were fiery and energetic and on top of their collective game. With Chambers pounding the drums, bassist Nick Wilkinson thumping the bass, and guitarist James Walbourne wailing away on lead guitar, Hynde was free to move about the stage and interact with the fans in the front row.

She even leaned into the crowd while taking the harmonica solo on ‘Middle of the Road.’ With the crowd still roaring, Hynde strapped back on the guitar and played the lead-in chords to ‘Brass in Pocket.’ It was a perfect cap to the set that reaffirmed the Pretenders’ reputation as an enthralling and dynamic live band. Hopefully this is a sign of more activity to come from Hynde and company in 2017.

Setlist: Alone | Gotta Wait | Message of Love | Private Life | Down the Wrong Way (Chrissie Hynde song) | Hymn to Her | Back on the Chain Gang | I’ll Stand by You | My City Was Gone | Holy Commotion | Stop Your Sobbing (The Kinks cover) | Don’t Get Me Wrong | Mystery Achievement | Middle of the Road | Brass in Pocket